Germany's Social Democrats have a problem. With less than a year to go before general elections, the center-left opposition party finds itself struggling to distance itself from Chancellor Angela Merkel on the election season's most important issue: the euro crisis. And that failure could weigh heavily on its chances next fall.

Should the SPD be planning to create separation, it doesn't look like it will happen this week. On Friday, yet another package of aid measures for Greece will land in front of the German parliament in Berlin. And despite a bit of public hand-wringing on Wednesday, it now looks as though the party will broadly support Merkel's euro-crisis course once again. During a test vote among SPD parliamentarians held on Thursday morning, only eight out of 146 lawmakers voted "no" and 12 abstained.

The move is not surprising. The SPD has spent much of the last two years backing Merkel as she tries to navigate the crisis while avoiding as little collateral damage to Germany as possible. Indeed, in a February vote on aid for Greece, and again in a series of summer votes on the permanent euro-zone aid package, the European Stability Mechanism (ESM), SPD backing even served to cover up a potential embarrassment for Merkel: Several lawmakers in her own coalition rebelled on both occasions, but widespread support from the nominal opposition prevented a loss of face for the chancellor.

This week, to be sure, the SPD has tried hard to create the impression of dissent. "The SPD will stick to its position and fulfill its responsibility to Europe," said Peer Steinbrück, the party's chancellor candidate, on Thursday. But, he added, that doesn't mean his party supports Merkel's administration.

SPD parliamentary floor leader Frank-Walter Steinmeier struck a similar note, accusing Merkel's government of merely trying to avoid difficult decisions until after next year's elections -- before indicating, of course, that he would support exactly that course of action.

At issue, once again, is aid to Greece. On Monday night in Brussels, euro-zone finance ministers reached agreement with the International Monetary Fund on the way forward for Athens as it struggles to reduce its overall debt load. Germany's adamant opposition to a debt cut led to a host of measures -- including interest rate reductions, maturity extensions on emergency loans and a debt-buyback program -- all meant to reduce Greek sovereign debt to 124 percent of gross domestic product by 2020.

The deal means that Germany will forego some €730 million ($945 million) in revenues in 2013. But it avoids the issue of an outright debt write-down, a move that would cost German taxpayers billions. Most economists, however, believe it will ultimately be unavoidable -- and so does the SPD. On Tuesday, Steinmeier said: "The debt cut cannot be avoided."

On Wednesday, Social Democrats seemed eager to publicize possible resistance to Merkel's course. Leading parliamentarian Thomas Oppermann said that the "mood in the party is critical," adding that the party's ultimate stance was still completely up in the air. Another senior SPD member told the center-left daily Süddeutsche Zeitung that, if the vote on the document had been held Tuesday, "it would have been a 'no,'" adding that it would be difficult to round up sufficient SPD support.

Ultimately, however, a "no" on Friday would likely do the party more harm than good. For one, Steinbrück was Merkel's finance minister as the global financial crisis erupted in 2008 and 2009 and has positioned himself since then as a tough-talking, pro-Europe politician like Merkel. For another, voting against the Greece measures on Friday would put the SPD in the same camp as the far-left Left Party and create separation from their political allies, the Green Party, which plans to vote "yes" on Friday.

Approving the measures, however, is equally problematic. The party assured voters during the summer votes on the ESM that it was the last time the SPD would simply go along with Merkel's conservatives on euro-crisis measures. But lacking a euro-crisis strategy of its own, and one that differs dramatically from Merkel's, the party is having trouble distancing itself from the Chancellery. As one unnamed parliamentarian told the Süddeutsche Zeitung: "The desire for more opposition is growing."

On Thursday, SPD leaders seemed to half-heartedly foster the illusion that such opposition existed. "The package will not last," Steinmeier, the SPD floor leader, told reporters after the SPD decided to support it. He also said it was mostly designed to help Merkel's government put off tough decisions until after the elections.

According to media reports, many SPD lawmakers decided to support the Greece package so as to avoid hamstringing their chancellor candidate on the eve of the campaign.

Steinbrück himself was more circumspect and not interested in owning up to such tactical considerations. "We are continuing to do what we have always said we'd do," he said.

But it remains to be seen whether that will be enough to attract voters to his cause. 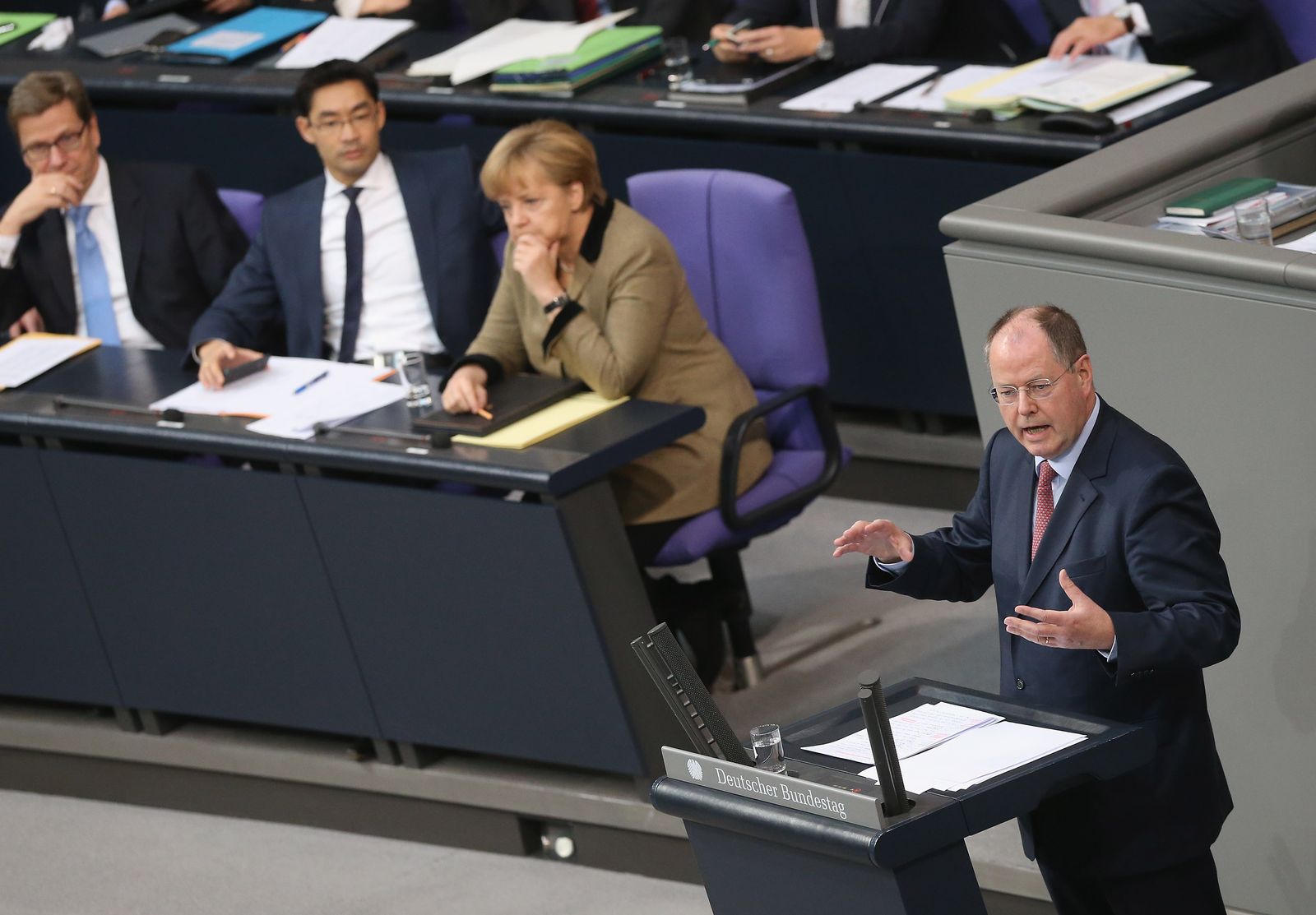