Angela Merkel began her third term as chancellor on Tuesday, with the Bundestag, Germany's lower house of parliament, electing her by 462 votes to 150. There were nine abstentions.

The 59-year-old conservative leader accepted the record result and thanked the country's politicians for their trust in her. No chancellor has ever received as many votes by parliament, even though at least 32 members of her own coalition didn't vote for her.

Merkel's new "grand coalition" government -- which partners her Christian Democratic Union (CDU), its Bavarian sister party, the Christian Social Union (CSU), and the center-left Social Democratic Party (SPD) -- now holds 505 of the Bundestag's 631 seats. The alliance came about after Merkel's CDU nearly achieved a parliamentary majority in the Sept. 22 federal election, but saw their coalition partners, the liberal Free Democrats, crash out of parliament by falling short of the 5 percent threshold needed to win seats.

While the CDU briefly flirted with the environmentalist Greens over a possible coalition, it soon became clear that the rival SPD, Germany's second-largest party after the conservatives, was their only viable option. But the coalition negotiations still took a record three months, during which time the agreement was put to a vote by SPD members, many of whom were apprehensive about the alliance after their party was weakened by the last grand coalition government during Merkel's first term, between 2005 and 2009.

The chancellor was inaugurated around noon in Berlin, followed by her cabinet, which was scheduled to have its first meeting on Tuesday afternoon. SPD leader Sigmar Gabriel has been named vice chancellor and economy and energy minister, while conservative Finance Minister Wolfgang Schäuble, a key figure in euro crisis negotiations, will stay in his post. The cabinet also includes the country's first woman defense minister, the CDU's Ursula von der Leyen. The SPD's Frank-Walter Steinmeier will return to the Foreign Ministry, a post he held during Merkel's first term.

Their coalition agreement includes the SPD-backed introduction of a national minimum wage, the continued pursuit of the Energiewende, the country's transition to renewable energy, and a steady-as-she-goes approach to the euro crisis. 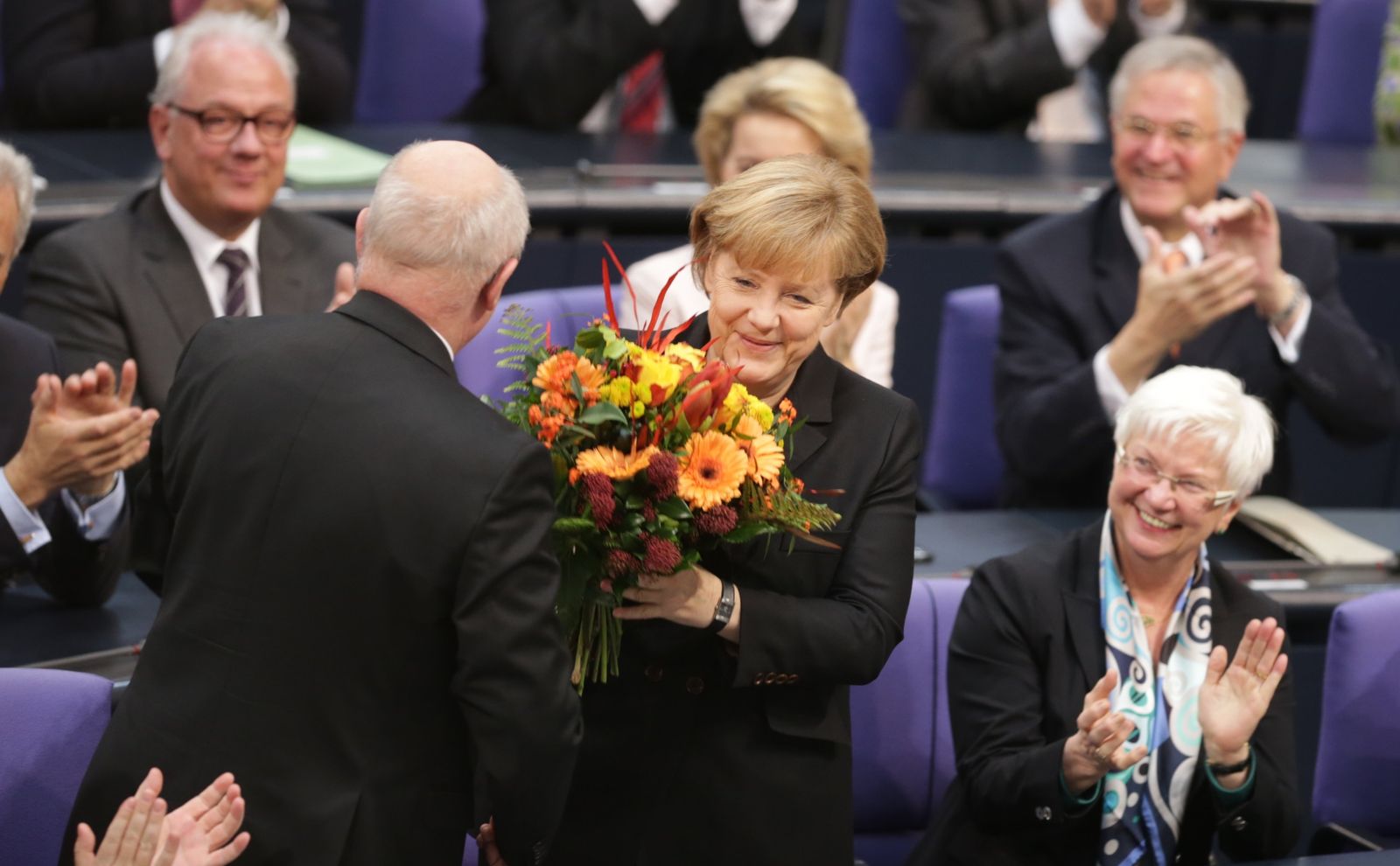 Merkel accepts flowers after Germany's lower house of parliament voted her into her third term as chancellor on Dec. 17.