Germany's Green Party used to be the model for upstart political parties in the country. But now it appears that the new Internet-freedom Pirate Party is on an even more rapid path to nationwide success. And it has overtaken the Greens in public opinion polls, as well.

According to a survey released by the pollsters at Forsa for broadcaster RTL on Tuesday, the political newcomers currently enjoy 13 percent of voter support and are now the third most popular party in the country ahead of the environmentalist Greens, which lagged behind at 11 percent.

The results come after a pair of recent eyebrow-raising successes in state elections. Last September, the Pirates received 8.9 percent of the vote in Berlin city-state elections. In March, the party followed that up with 7.4 percent in the tiny western state of Saarland, more than two percentage points ahead of the Greens.

Rivalry with the Greens

The Tuesday poll results seem destined to intensify the rivalry between the two parties as a pair of important state elections in Schleswig-Holstein and North Rhine-Westphalia approach. In both states, poll numbers show the Pirate Party has enough support to clear the 5 percent hurdle for parliamentary representation.

"I'm hoping for 6.5 percent," Pirate Party deputy leader Bernd Schlömer told the WAZ media group on Tuesday, though he added that the elections were not the final test of their maturity. "It's not tragic if we don't reach the 5 percent hurdle in Schleswig-Holstein or North-Rhine Westphalia," he said.

The Greens, for their part, seem not yet to have settled on a strategy for facing the Pirate Party's popularity. In early April, Green parliamentary group chairwoman Renate Künast said her party would actively take on the Pirates, "forcing them to take a position." Then, over the weekend she seemed relaxed about the party's popularity in an interview with radio broadcaster Deutschlandradio Kultur, saying that the Greens were "more widely positioned." Meanwhile, other Green Party members have chosen to question the poll numbers. "Am I the only one who thinks that the RTL/Forsa 'opinion polls' are downright dubious and unrepresentative??!" Green party state parliamentarian in North-Rhine Westphalia, Arndt Klocke, wrote on his Twitter feed.

Other polls have indeed shown slightly less support for the Pirates. The most recent survey by political research institute Infratest Dimap put the party at 10 percent, while pollster Emnid reported they had 9 percent.

But even as they achieve national success, the Pirate Party continues to grapple with internal questions about strategy and leadership. Late last week the party's youth organization, the Young Pirates, made allegations of sexism and racism. In a statement calling for tougher measures against problem members, the group reported that one woman had been described as "too pretty" to be taken seriously, and that a Twitter discussion had declared there was no problem with being "critical of foreigners." But on Monday the party's spokesperson rejected the Young Pirates' demand, explaining in a statement that their open forum would sometimes give rise to unpopular statements.

The Forsa poll also had good news for the embattled Free Democratic Party (FDP), the junior partners in Chancellor Angela Merkel's center-right governing coalition. The pro-business party managed to garner 5 percent of voter support, meaning that after months of abysmal poll results, the party may be on the road to at least partial recovery.

Five percent, however, still wouldn't be enough to maintain a majority for a coalition with Merkel's conservative Christian Democrats (CDU), who together with their sister party the CSU had 36 percent of voter support. With a federal election coming up in 2013, Merkel is already shifting her policies to the left to redirect support for the center-left Social Democrats (26 percent) and improve her chances of staying in power for a third term. 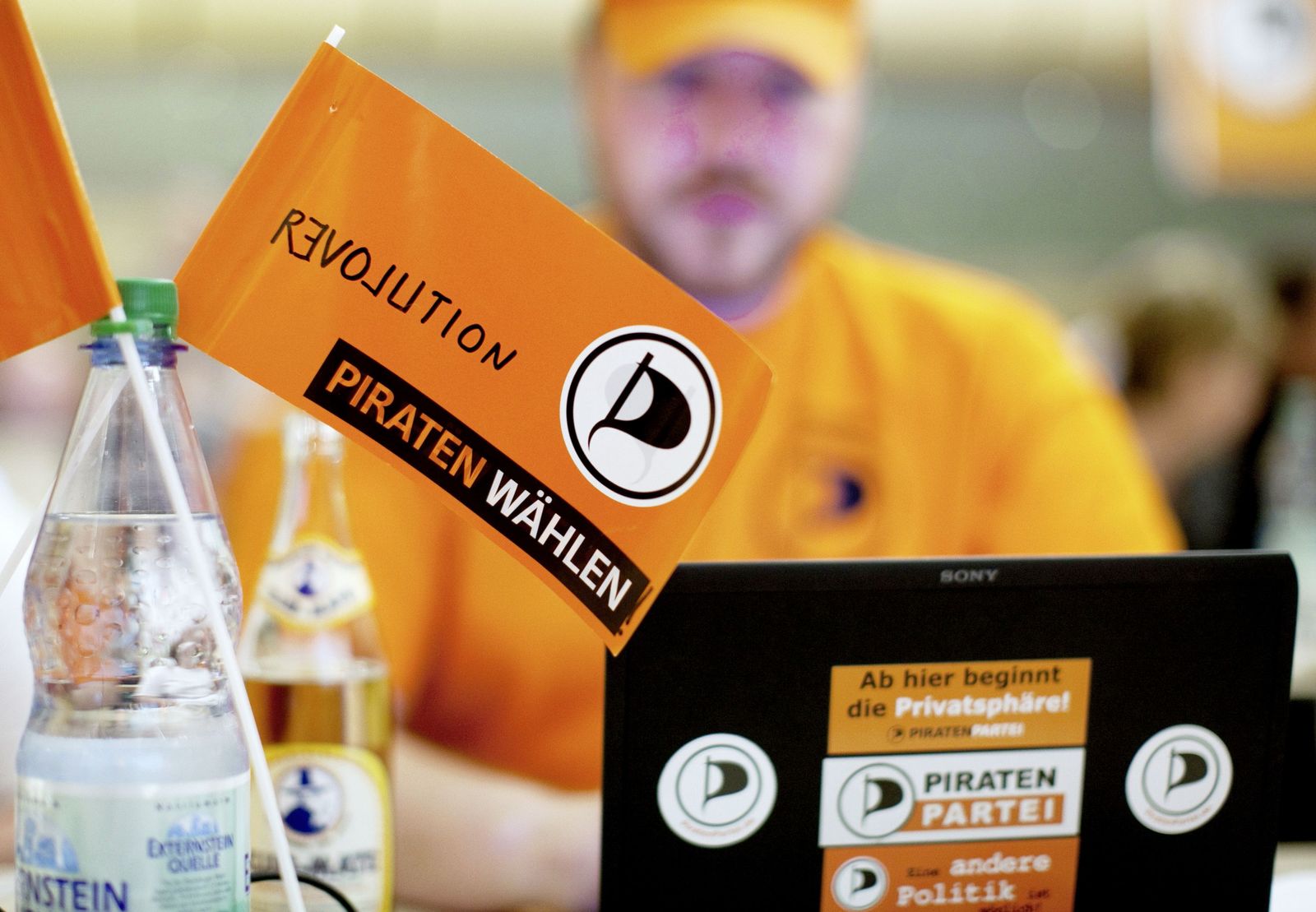 A Pirate Party supporter last month at their convention in Münster.