"We will definitely be voted into federal parliament. I can do nothing to change that." Thus spoke Johannes Ponader, a top member of Germany's Pirate Party one year ago. It turns out, he may have been mistaken. In the last 12 months, the party has seen its support plummet -- to below the 5 percent necessary for seats in the Bundestag. And this weekend, the Pirates tried to finally turn their ship around.

Item No. 1 on the list of reforms was getting rid of Ponader himself. The Pirate equivalent of general secretary, he made headlines last year with his insouciant appearances on nationally televised talk shows, on one occasion infamously clad in open-toed sandals and a grungy looking cardigan while sending tweets from his smart phone on live TV.

At the time, his quirks were seen as part of the Pirate phenomenon -- and its anti-establishment message. More recently, however, Ponader came to symbolize the party's failure to build on its earlier popularity. After an ugly, months-long power struggle this winter, Ponader finally announced his resignation in March. On Friday, at the Pirate Party congress in the Bavarian town of Neumarkt, he gave his farewell speech and was replaced by Katharina Nocun.

But personnel issues were never the Pirate's primary weakness. Rather, the lack of a consensus on what the party stood for -- combined with the shrill tones often used in attempting to arrive at such consensus -- pushed away many potential supporters. Strife overshadowed substance, and its alternative message came to be seen as a sign of immaturity rather than innovation.

It is, of course, difficult to reverse almost a year's worth of negative publicity in a single weekend, but the Pirates by all accounts took the necessary first steps. With the general election now but four months away, several items were added to the party platform, including a demand for a fundamental minimum income for everybody as well as a minimum wage. Items calling for strengthened data protection laws were also included. The party even went outside of its comfort zone to add a geo-political plank identifying the party as a "peaceful but not a pacifist party. We stand for human rights and citizen rights across the globe."

Still, a Pirate Party congress would not be complete without a substantial disagreement of some kind. Interestingly, the spat of note this weekend was over the degree to which the party wants to make its decisions online. For months, the Pirates have been debating the merits of instituting a kind of permanent digital convention allowing for the party to establish binding positions on issues on a rolling basis -- without the need for actual conventions.

Currently, the party's "liquid democracy" program allows for all manner of political discussion to take place online. Majorities can be assembled and motions made. But binding decisions have to be made offline. It is an element of traditional politicking that many in the party would like to do without.

But not all. The back-and-forth on the issue was so intense over the weekend that seven people at the congress collapsed from the strain, according to senior Pirate Florian Bokor. On Saturday night, Bokor simply ended the debate at 9:30 p.m. noting that "the mood is, to say the least, in the shitter."

For most Pirates present this weekend, it didn't improve. The party was unable to achieve the two-thirds majority needed to establish the digital decision-making system that most long for, falling short by a mere 23 votes out of the almost 1,000 members present. With 64 percent in favor of online decision-making, frustrated party members were not hard to find on Sunday.

But the party may be in the process of turning the corner nonetheless. A new survey published on Sunday in the tabloid Bild indicates that 4 percent of the German electorate is currently willing to support the Pirates -- below the all-important 5 percent hurdle for federal representation, but higher than a month ago. 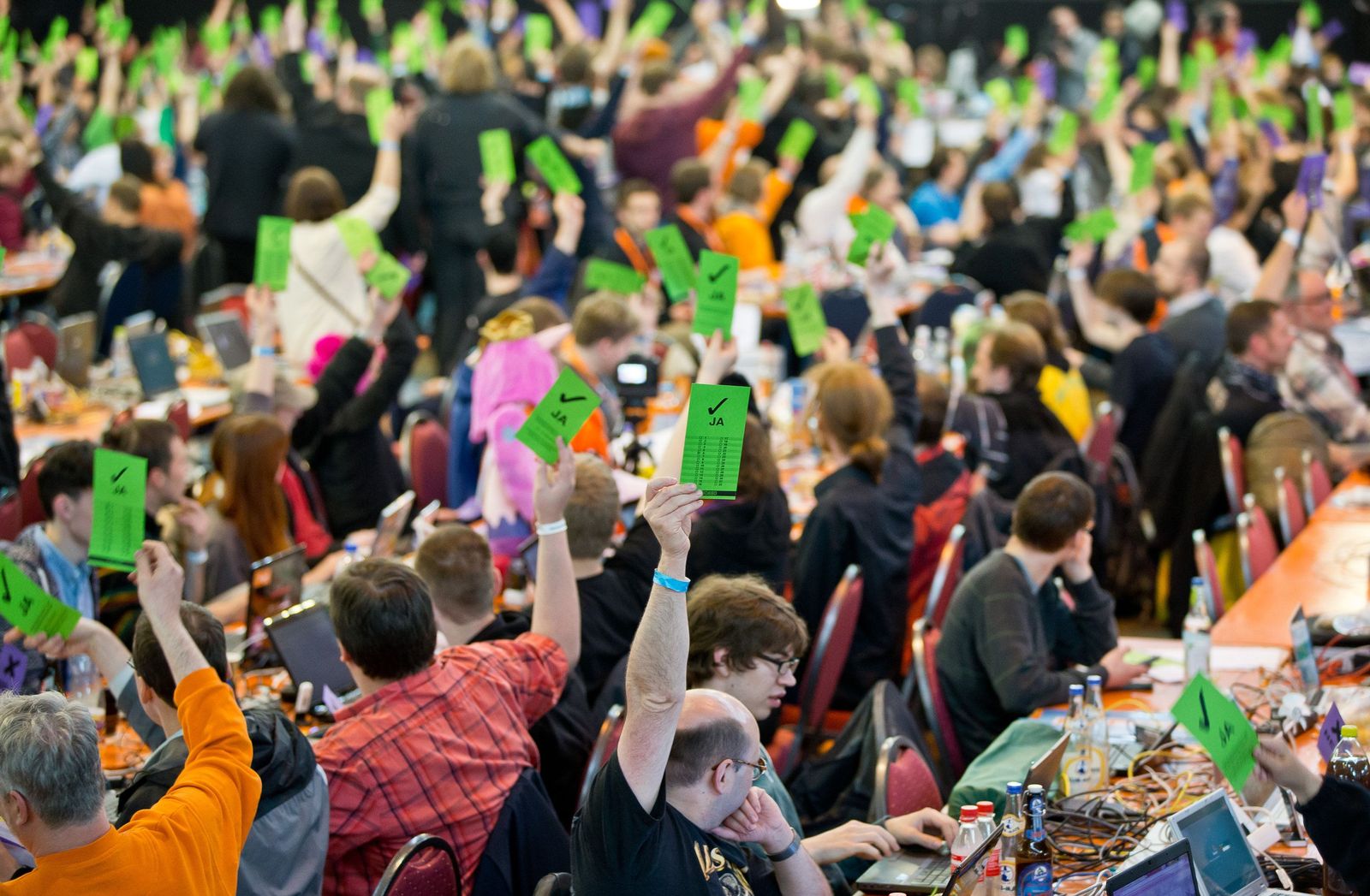 Germany's Pirate Party is seeking to leave strife behind, but having trouble doing so.