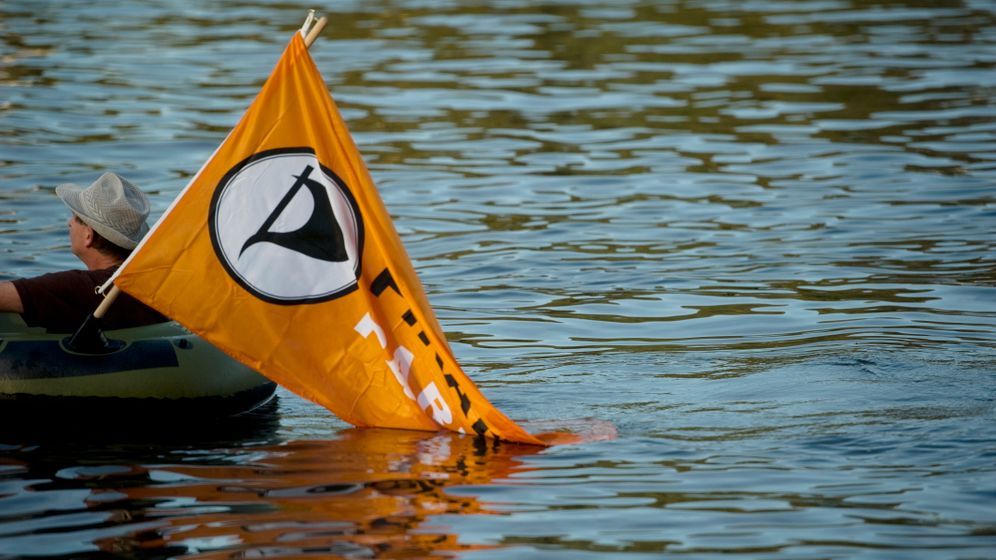 Bernd Schlömer couldn't take it any more. "I've had enough," he announced. "I've really had enough."

The chair of Germany's Pirate Party is no stranger to criticism. Online commenters have called him everything from a "maniac" to simply an "asshole." Schlömer is quite used to insults.

This makes it all the more surprising that Schlömer reacted so strongly to criticism from one of his colleagues this February during a virtual meeting with party leaders. This particular member joined in the discussion to declare that he considered Schlömer incompetent.

That's an ordinary comment for the party, but for Schlömer it was one attack too many. "I'm not going to let everyone publically have a go at me," he shouted. "People are enjoying the way I'm being discredited and slagged off as party chair." He took several deep breaths and appeared to struggle for air. Then he said again, "I've had enough."

The Pirate Party finds itself falling apart. With German federal elections seven months away, a minor miracle would have to occur for the Pirates to clear the 5 percent hurdle that allows a party to hold seats in the Bundestag, the country's parliament. The Pirate Party has been too busy tearing itself apart, with members fighting leaders, who are bickering among themselves and antagonizing the members too. In just the last two days, party leaders for the states of Baden-Württemberg and Brandenburg have stepped down, citing the negative climate.

"The atmosphere is so poisonous, there's hardly any constructive work taking place anymore," says Udo Vetter, one of the party's prominent candidates in the state of North Rhine-Westphalia. Marina Weisband, one of the Pirates' most iconic figures, took refuge in gallows humor last week when she tweeted, "We're the party of liquid democrazy." It may sound funny, but it's not a joke.

Others are watching the Pirate Party's decline with a hefty dose of schadenfreude. "Isn't the very existence of the Pirates a symptom of digital dementia?" wrote the daily Frankfurter Allgemeine Zeitung. Yet the failure of the party is also the failure of an attempt to reform democracy. The Pirate Party isn't some splinter group driven by hate, riding a wave of public ill will into office. The party's rise came about through a promise to make German politics friendlier and more accessible to the people and their wishes.

Their chosen mediums for carrying out that promise were computers and the Internet, instruments meant to liberate politics from the grasp of back rooms and insider cliques. On the Internet, everyone has a voice -- the Web can essentially be seen as one enormous town hall meeting. And when people meet there, the opportunity arises for a collective intelligence to form.

This utopian vision appealed especially to young people and to those who had grown disillusioned with politics as usual and its outdated rituals. When the Pirate Party first gained seats in Berlin's state parliament in September 2011, nearly a fifth of its votes came from people who generally considered themselves non-voters. No one could say exactly what the Pirates stood for, but it was precisely this dilettantish aspect that lent the party its charm. "We're the ones with the questions. You're the ones with the answers," read the slogan on the Berlin Pirate Party's campaign posters.

This collective online intelligence, though, has turned out to be more destructive than it is wise, and the transparency of the Internet has proved less of an advantage than a curse. The established political parties may seem dull with their rules and regulations, but structure helps things run smoothly, and old-fashioned mores can keep things civilized. On the Internet, where the Pirates meet, anarchy reigns.

The party has not managed to rein in the dark side of the Internet, the hatred and mud-slinging so common in the online world. Quite the opposite, in fact -- these same negative aspects have come to infect the party itself too.

No one has felt this as keenly in recent months than party chair Bernd Schlömer, a man with a rock-solid temperament. The Pirate Party elected him in part for just that reason, hoping that he would keep his cool amid the chaos and hysteria that come with creating a new political party.

This Ash Wednesday, a day German political parties traditionally meet, Schlömer took to the podium in a half-empty hall in the southern German city of Ingolstadt. A party chair would normally use such an opportunity to rake his opponents over the coals. Schlömer, however, wanted to give a presentation on education and construction policies.

Schlömer is adept at defusing emotional situations, but has nonetheless found himself the target of a constant stream of insults and abuse. Ten months as party chair have left him a politician close to breakdown.

"On Twitter I'm a militarist and a sexist," Schlömer says. "You're exposed to extremely hurtful things and you get very little reassurance. You're constantly bombarded with below-the-belt criticism, most of it anonymous." When Schlömer recently told the Süddeutsche Zeitung that he believes achieving gender equality requires not only supporting women but also expecting more of them, a wave of bad-mouthing engulfed him, expressed under the hashtag "#sexistischekackscheiße" ("sexist shit"). "Babbling Bernd" and "Mercenary Schlömer" were among the friendlier sobriquets that arose.

There are mock Twitter accounts that exist solely for the purpose of mocking the Pirate Party chair. "My methods will triumph!" write Schlömer's detractors at @GroeVaz, an account that specializes in spiteful comments on the "greatest party chair of all time." When Schlömer finished his address in Ingolstadt last Wednesday, one party member tweeted, "The best part of the speech was when he stepped away from the microphone."

Three-quarters of a year after taking office, Schlömer appears worn out and disappointed. He says he doesn't understand why people who are well-received publicly are criticized so harshly within the party. "I pictured politics differently, as more harmonious," he says. "I'm not out to get power. I have no mandate, no salary. I'm also willing to eventually step down. And still people accuse me of being power-hungry and of not listening to the party's base." Actually, Schlömer says, he's the first party chair to introduce open office hours, from 9 to 10 p.m. each Monday.

Schlömer is not just battling the flood of online hatred, but also dealing with the fact that any new political party seems to irresistibly draw eccentrics. And in the case of the Pirate Party, that eccentric problem goes by the name of political director Johannes Ponader.

Ponader and Schlömer were elected to lead the party together, and at first glance they seemed to be a perfect team. Schlömer stood for serious politics, while Ponader wanted to reach out to the digital nomads who populate Berlin's cafés with their laptops, hopping from one freelance project to the next. Ponader likes to celebrate his difference from the mainstream middle class, and it's thanks to him that the country now knows what a polyamorous lifestyle entails.

But instead of complementing one another, Ponader and Schlömer clashed from the start. Schlömer wants to make the party more professional and put together a team to take responsibility for the upcoming parliamentary election campaign. Ponader, on the other hand, sees in this the dreaded "top-down principle" and the grotesque countenance of hierarchy. While Schlömer advocates improving the party's public image, Ponader fuels debates over transparency or re-electing leaders. If Schlömer urges haste, Ponader asks for more discussion. Theoretically, this could be seen as a struggle to find the best way to do things. But the problem is that the Pirate Party knows nothing but fighting, not how to reconcile or compromise.

No Clear Rules for Debate

At this point, nerves are so strained that the party's officials can barely even communicate with each other. On February 7, Ponader sent out a group email in which he copied a text message sent by Christopher Lauer, head of the party's parliamentary group in the Berlin state parliament, demanding in harsh terms ("Man, how messed up are you?") that Ponader resign. The resulting uproar was so intense that the internal mailing list of the party's federal-level leaders has been quiet since.

Ponader has no regrets about the email he sent. "It's clear to me that I upset some of my fellow party leaders," he says. "But when I recognize a systematic pattern in this kind of act, I have an obligation to make it public."

Now the party is asking members to weigh in online as to which party leaders still enjoy their confidence. This vote is meant to be nonbinding, but no one has said exactly how a party leader is meant to continue working after the base has revoked its support in an online vote.

The Pirates are the Internet party, but more often than not digital communication has only caused chaos. For one thing, the party hasn't managed to establish clear rules for its online debates. Even Klaus Peukert, the official responsible for this area, admits as much. "The party hasn't agreed on a binding online voting procedure," he says, "which means that the atmosphere among the party's membership often comes across to us a muddle of different moods. It's not possible to get a clear sense of the majorities at work."

Many see the voting software Liquid Feedback, which the Pirate Party uses to gain an impression of its members' opinions, as a sign of great progress. But decisions reached using the software still aren't binding. Time and again, a majority of the party's members express support online for a particular idea, only to scrap it at the party's next real-world meeting. This confusion means that often the Pirates don't have anything to say on a variety of important issues.

In many cases the party deals in little more than buzzwords, for example when it comes to foreign and security policy. The official party platform says that it seeks to work toward peaceful conflict resolution. While that's an admirable stance, where does it mean the party stands on the current war in Syria? No one knows for sure.

The Pirates could conceivably make up for this lack of content by emphasizing other features such as charismatic figures, brains or nontraditional politicians. Instead, those who stand out too much soon garner hatred. The party seems to prefer its public figures to be nondescript, which was the case when it came to picking candidates for the parliamentary election. In the state of Brandenburg, for example, the Pirates chose a complete unknown, Veit Göritz, to be first on their list of candidates, the one most likely to be elected. Prominent Internet activist Anke Domscheit-Berg, meanwhile, got the second spot on the list -- and is unlikely to actually obtain a seat in parliament.

Marina Weisband, too, has seen how her party treats people who are well-liked by the general public. The party's former political director, who stepped down in January citing health issues, briefly considered returning to politics and running for a seat in the upcoming parliamentary election. But when SPIEGEL published an article detailing her intentions, there was a hail of criticism from party members who said the politician was arrogant and taking herself too seriously. Soon after, Weisband announced she would not be running for parliament this year.

These days, Weisband looks exhausted, in part from all the party infighting. She has written a book scheduled for publication in March, and at the moment will comment publicly only on that, not the Pirates. It seems she's afraid to be told once again that she's making too much of herself.

But Weisband's blog reveals how she sees the Pirate Party these days. The party promised to reform democracy, she writes, wanting to be a force in which an idea's merit was the only thing that mattered, and anyone could take part. But it failed to make good on that promise. "We're too cowardly," Weisband writes. "We lied."