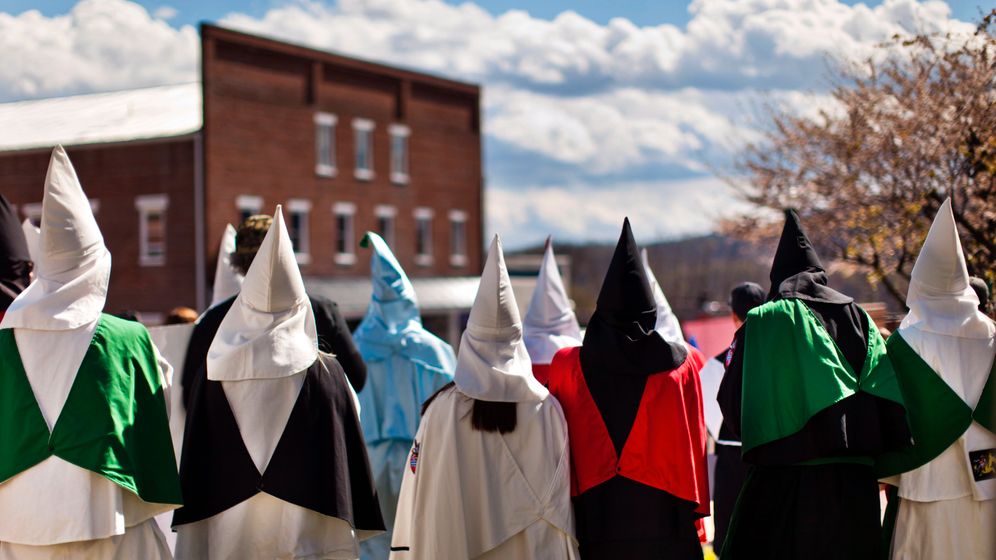 A racism scandal is unfolding in Germany this week following the revelation that two police officers in the southern state of Baden-Württemberg had been members of a German spin-off group of the Klu Klux Klan. The two men are still serving in uniform -- one on the normal police force and the other as a squad commander for riot-control police. The state's Interior Ministry on Wednesday confirmed reports that the men had been involved with a group that called itself the European White Knights of the Klu Klux Klan (EWK).

The development has left many officials dumbfounded. How, they are asking, could public officers who swear an oath to protect the constitution have been members of a racist organization? Officials first uncovered the links during an ongoing investigation of the murderous National Socialist Underground (NSU) neo-Nazi terror cell. Between 2000 and 2007, the group allegedly murdered at least nine small businessmen of mainly Turkish descent, along with one policewoman, Michèle Kiesewetter. The two police officers with alleged Klu Klux Klan links also happened to be Kiesewetter's former colleagues.

If not for the neo-Nazi terror investigation, light might never have been cast on the fact that the Klan has been active in Germany. EWK operated in Baden-Württemberg between 2000 and 2002, with domestic intelligence counting some 20 members in the end, according to German daily Die Tageszeitung. But even more unbelievable than the group's existence is that German police officers were involved, and that very little action was taken once they were exposed. While they were both reportedly subject to disciplinary action, they were still allowed to keep their jobs.

Sebastian Edathy, a member of the center-left Social Democratic Party who heads an investigative committee on the crimes of the NSU in Germany's parliament, the Bundestag, is calling the situation a scandal. "Civil servants who are or were members of a decidedly anti-democratic, extremist organization must be removed from the police force," he said.

Internally, authorities have been aware of the case since 2003, when they uncovered evidence of the officers' temporary membership during a search of the EWK leader's apartment in the city of Schwäbisch Hall. During the ensuing disciplinary proceedings, the two officers justified their participation by saying they only become aware of the true character of the organization after they had been members for a while. After learning the truth about the group, they claim, the men left it. One of the police officers reported that it only dawned on him after an aggressive neo-Nazi from eastern Germany with tattoos of Adolf Hitler appeared at a meeting.

Membership for one of the officers lasted half a year, while the other quit the EWK even sooner. The men appear to have convinced their superiors of their naïveté because they both kept their jobs.

But with the newly revealed connection to murdered policewoman Kiesewetter, their KKK past has come into question once again. One of the men had been Kiesewetter's immediate superior in the riot police, leading a group of about 10 officers.

But was there a connection between these two officers and Kiesewetter's murder? There has been ample speculation that her alleged murderers, the NSU, were in possession of insider information. However, investigators have not found any evidence of this, Die Tageszeitung reported.

"There isn't a single indication that other people or organizations besides the NSU could have been involved in the crime, in whatever form that might be," a spokesperson for the Federal Prosecutor's Office told the paper.

In the state capital of Stuttgart, however, the Klan-connected police officers are causing quite a stir. State Interior Minister Reinhold Gall wants a report on the matter as soon as possible and hasn't ruled out further measures in response. "Of course, we are anything but happy about this," a ministry spokesperson said.

Officials with the federal government in Berlin don't plan on letting the issue rest, either. Members of the parliamentary investigative committee on the NSU are finding plenty of information on the two former EWK members in their files, which compile much of the data that has been collected so far about the NSU murders, the terror cell and the people linked to their millieu. The parliamentarians have been able to read, for example, about one officer's description of his initiation rite, during which he had to cut his fingers with a razor blade before getting accepted into the group.

"Whether there was a connection between their Ku Klux Klan membership and the murder of police officer Michèle Kiesewetter remains to be seen," said committee leader Edathy. "But membership in such an organization must be an absolute no-go for employees of German security agencies."

Edathy says he wants to examine the issue thoroughly. "I want to know if these were isolated cases," the politician said.