The report headlined Serial Murder Analysis is seven pages long and bears the seal of the US Federal Bureau of Investigation on its first page. In June 2007, German police had asked the highly specialized US analysts to examine the serial killings of nine immigrants -- eight ethnic Turks and one Greek man -- that took place between 2000 and 2006 and had mystified the authorities here.

The US profilers came up with a clear conclusion, SPIEGEL has learned. The perpetrator, the report concluded, was a "disciplined, mature individual who is shooting the victims because they are of Turkish ethnic origin or appear to be Turkish."

"The motivation is a combination of personal cause and thrill," the report said. "The offender has a personal, deep rooted animosity towards people of Turkish origin, for some real or perceived unknown reason." It noted that there was a component of thrill involved because he was taking high risks by committing the crimes in broad daylight.

German police solved the case by accident four years later, when they found the murder weapons, including a Czech-made Ceska 83 pistol, following a botched bank robbery by Uwe Böhnhardt and Uwe Mundlos, two neo-Nazis who are believed to have committed suicide in their camper van in Eisenach, eastern Germany, last November.

Police found a wealth of evidence in an apartment in the city of Zwickau where the two had lived with Beate Zschäpe, who was arrested. Among the items found was a DVD in which the trio calling themselves the National Socialist Underground claimed responsibility for the killings and other attacks, including the killing of a policewoman in 2007 and a nail bomb attack in Cologne in 2004 that injured 22 people in a part of the city where many ethnic Turks live.

German police and intelligence have been criticized for their handling of the case and for failing for a long time to investigate a possible racist motive vigorously enough.

Unlike the FBI profilers, German investigators were ambivalent about the motives and were in 2007, at the time of the FBI report, still pursuing two theories. One theory said the killer chose his victims at random and hated foreigners. The other theory, which was taken equally seriously, was that there may be a criminal organization that had some link with the victims and had sent a contract killer to liquidate them. The head of the Nuremberg-based police task force investigating the crimes, which was named "Bosporus," said there was much to suggest that both hypotheses were wrong.

Professional criminals who were paid for their crimes would have been unlikely to commit the killings in the middle of the day because the risk of being spotted and caught was greatest then, police said at the time. Besides, the victims in three of the killings, in Kassel, Nuremberg and Rostock, had only been in the shops by chance when the killers struck. A contract killer would have had to go to great lengths to follow them. It was an unlikely scenario.

So what about a lone racist? There were good arguments against that theory as well, police said at the time. The case analysts at the Federal Criminal Police Office (BKA), which is Germany's version of the FBI, had argued in 2008 that serial killers usually have sexual motives and almost always commit their crimes close to where they live. This killer, by contrast, traveled the length and breadth of Germany. And in the case of Internet café manager Halit Y., killed in Kassel in April 2006, there was no indication, for example through a sign outside, that he was of Turkish origin, police said at the time.

But the FBI had recommended conducting a high-publicity search for people who have a "grudge against ethnic Turks" and may have been in the various places at the time of the shootings.

In addition, the US case analysts noticed the unusual caliber of the second pistol used in the shootings. In addition to the Ceska 83 the killers used an old 6.35 mm weapon in the first murder, in Nuremberg, and the third murder, in Hamburg. The profilers concluded from this that it was probably an old weapon of which the offender was "very proud." They advised their German colleagues to issue a media release seeking the owners of such weapons.

The pistol was found in the ruins of the burned-out Zwickau apartment. It was an Italian pistol of the type Bruni Mod. 315, built as a starter pistol but later modified to fire real bullets.

According to information obtained by SPIEGEL ONLINE, investigators also found numerous newspaper clippings about their attacks in the apartment. They noticed that they had kept significantly more articles from local Rhineland newspapers Express and the Kölner Stadt-Anzeiger about the 2004 Cologne nail bomb attack than about all the other attacks.

That begs the question whether the killers had really spent months sifting through local newspapers -- assuming they were even available in Zwickau. If not, someone who presumable lived in the Rhineland must have supplied the cell with the newspapers. That means there could be an accomplice so far unkown to the police. 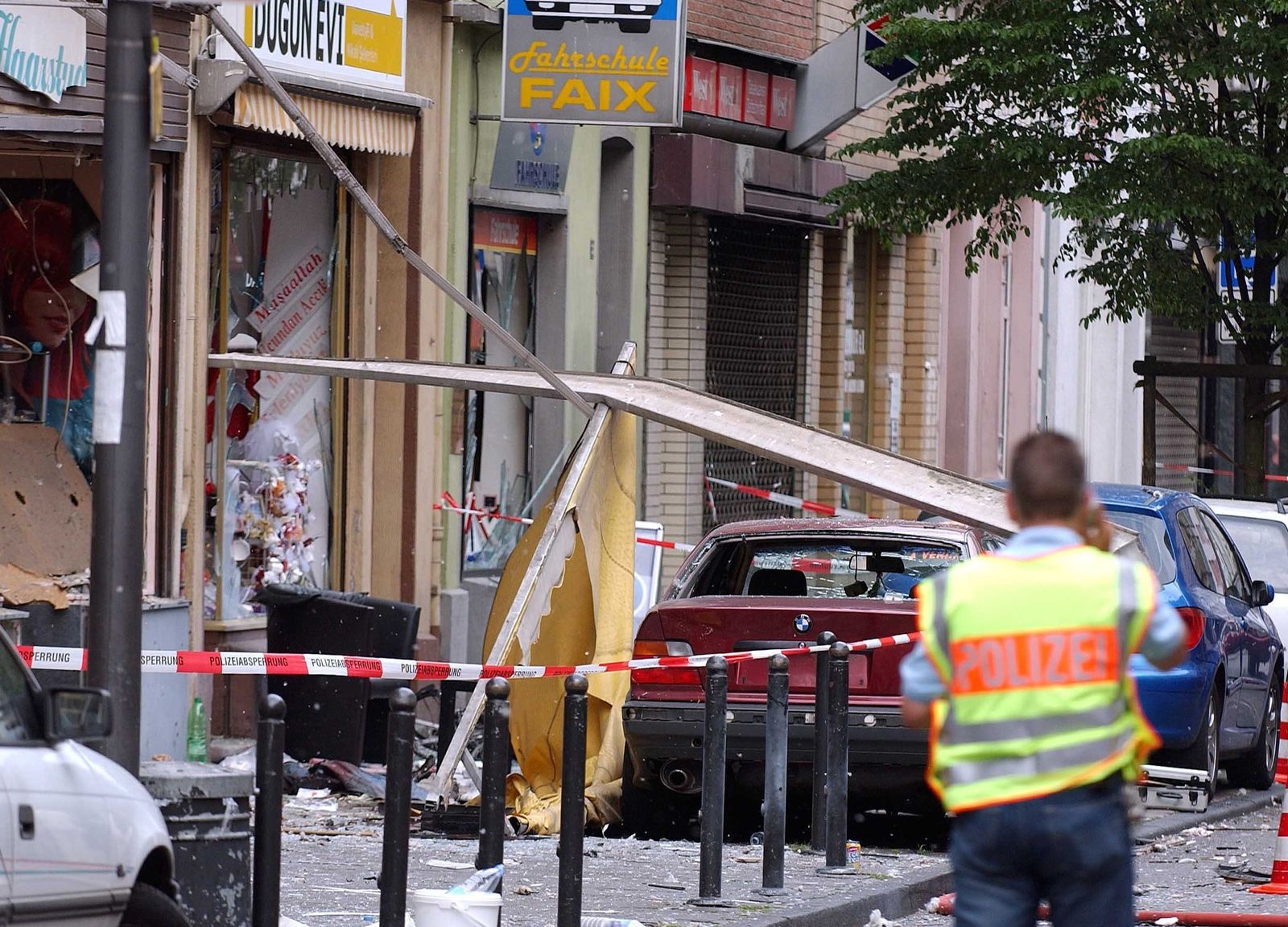 The scene of a 2004 bombing attack on a store in Cologne's Keupstrasse in 2004: German authorities sought the FBI's help in evaluating the threat.