The incident occurred on the Friday before last. It was shortly before midday when the government spokesman lost his bearings. Steffen Seibert had unwittingly put himself in the line of fire.

During a government press conference, a journalist wanted to know how the chancellor felt about the behavior of her coalition partner, the pro-business Free Democratic Party (FDP), which had controversially blocked a plan to set up a so-called "transfer company" to train and find new jobs for the 11,000 employees of the Schlecker drug store chain, which had gone bankrupt. Seibert replied with what he felt was the right answer: "There are reasons for a transfer company, and there are very good reasons against it." That was interpreted as a gesture of support for FDP leader Philipp Rösler. A short time later, the news agencies reported: "Merkel backs Rösler after Schlecker decision."

Something had gone wrong. Was the chancellor siding with Rösler? Was this a sign of indifference towards social justice? That wasn't the message Chancellor Angela Merkel had intended to convey. In fact, she could very well envision a rescue company for the mainly female shop assistants made redundant by Schlecker. The chancellor was worried about the poor Schlecker ladies -- that was the Merkel image her spokesman was meant to spread. Seibert was quickly told to correct the mistake. In the afternoon, he tried desperately to revise his statement. He said that he had been totally misunderstood, and that the chancellor had most certainly not sided with the FDP. But it was too late. The next morning, the Süddeutsche Zeitung ran a cover story titled "Merkel Approves FDP's No to Schlecker."

Fortunately for the chancellor, the government spokesman's slip-up was overshadowed by fresh news on Saturday. On Friday night, her government and local authorities had agreed to a healthy wage hike for public-sector workers. It was much more in keeping with the image Merkel would like to acquire at the moment.

Beating the SPD at Its Own Game

Her strategists at the chancellery and at the headquarters of her party, the center-right Christian Democratic Union (CDU), are already setting their sights on the 2013 general election. From now on, every policy stance will be examined in terms of whether it could benefit or harm Merkel in her fight against the left. In this sense, anything that places the chancellor on the side of workers is good. And everything that could provide the center-left Social Democratic Party (SPD) with ammunition for a campaign based on fairness and social equality is bad. Merkel's advisors want to be able to deflect all the SPD's attacks.

Merkel is still haunted by the trauma of 2005, when she failed to recognize soon enough that the era of the neoliberal zeitgeist was coming to an end, and endorsed a radical tax simplification plan proposed by tax law expert Paul Kirchhof. It was a fatal mistake.

Gerhard Schröder, the SPD chancellor in office at the time, easily dismissed the "professor from Heidelberg" as a symbol of right-wing indifference to social justice, and managed to tar Merkel with the same brush. In the end, the outcome of the election was so close that Schröder initially claimed victory, and she had to form a power-sharing government with the SPD instead of her preferred partner, the FDP.

Merkel drew her conclusions from this near defeat. The CDU and its sister party, the Bavarian Christian Social Union (CSU), cannot win an election on social welfare issues -- at least not against the SPD, which will always outgun the CDU when it comes to welfare handouts.

The chancellor knows that she is vulnerable. After the Lehman bankruptcy, her government spent billions on bolstering the banks, and new, bigger bailout funds for the ailing euro zone countries are constantly being set up. The costly aid programs are unpopular, and they only exacerbate the fairness debate, which can be boiled down to a simple question: "Why are you helping the banks, but not the women at Schlecker?"

To deal with her image problem, Merkel is now systematically trying to defuse all conflicts that could allow the SPD to run a campaign based on issues of fairness. Costs are not important to her, and she is willing to risk incurring the wrath of the right wing of her party. The conservative party organization in the western state of Hesse has seen itself as a counterweight to Merkel's positions until now, but ever since the debacle in the Frankfurt mayoral election last month, where the SPD beat the CDU candidate and won for the first time in 17 years, it's become clear that the right wing's appeal is limited.

If Merkel's plan works, the CDU/CSU will enter next year's election campaign with central positions that hardly differ from those of the SPD. This would make it difficult for the Social Democrats to energize their base through polarization, and in the end the election would probably boil down to a single question: Who would be the better chancellor?

According to current opinion polls, the Germans are clearly answering this question in favor of the incumbent, who is far ahead of the possible SPD challengers, party chairman Sigmar Gabriel, former Foreign Minister Frank-Walter Steinmeier and former Finance Minister Peer Steinbrück.

Merkel's strategy became clear early in the morning on the Saturday before last, when Interior Minister Hans-Peter Friedrich (CDU) and Frank Bsirske, the head of the public sector Ver.di, shook hands after four weeks of negotiations. They had agreed to a 6.3-percent pay hike for federal and municipal employees over a two-year period. Germany hasn't seen that kind of increase for a long time. In mid-January, FDP Chairman Philipp Rösler had spoken out against significant wage increases, arguing that wage restraint had pushed down unemployment in recent years. "And it ought to stay that way," Rösler said.

Merkel disagrees. Before the wage talks, Friedrich had obtained Merkel's carte blanche for a generous pay agreement, and Finance Minister Wolfgang Schäuble had made it clear to his colleague that he would not veto a substantial raise for public-sector employees.

It doesn't trouble Merkel's team that cities and towns are complaining about the billions in additional costs, and that other industries, like employers in the metalworking sector, are warning that the wage agreement could set a precedent. On the contrary, the chancellery is betting that satisfied workers are satisfied voters. "It's nothing but a recovery dividend," says a Merkel associate. "When the economy is growing, employees should also get their share of the pie."

At present the CDU is only prepared to annoy the more affluent citizens, and even tax increases are no longer a taboo for the party. Former Finance Minister Steinbrück may now be advocating higher taxes for the rich, but the CDU/CSU have beaten him to the punch.

Only recently, Norbert Lammert, the speaker of the Bundestag, spoke out in favor of a higher top tax rate. Members of the left wing of the CDU support him, including Annegret Kramp-Karrenbauer, the governor of the southwestern state of Saarland, and Peter Weiss, the head of the CDU/CSU employers' association in the Bundestag. "I support higher taxes for higher earners, as long as we reduce the tax burden on people with lower and middle incomes in return," he says.

Until now, the chancellor has stonewalled all debates on tax increases. But this was done out of consideration for the FDP, which is already sufficiently dismayed over the failure of its plans to reduce taxes.

Merkel has not failed to notice the growing desire within her party to ask the rich to pay up, and a small tax hike for the well-to-do is no longer being ruled out at government headquarters. In fact, it could even become part of the CDU's election platform for 2013.

Merkel's most important weapon in the battle to seze the high ground on social equality is Labor Minister Ursula von der Leyen (CDU). She is promoting the debate within the party and thereby allowing Merkel to stay out of the fight.

Von der Leyen mentions the words "justice" in every interview and at every appearance. "I don't view social justice as populism," says von der Leyen, and because her ministry has a budget of €126.5 billion ($164 billion), she has no trouble building "social guardrails."

Take, for example, Germany's 20 million retirees. They are among the CDU/CSU's most loyal voters, and this year they were given a two-percent increase in their state pensions. Now von der Leyen is putting together a new feel-good program, which she expects to submit to the cabinet before the summer recess. It includes improvements for reduced earning capacity pensions, better supplementary income opportunities for early retirees and a supplementary pension for low earners.

Soon pensioners may even get benefits for helping out with childcare, at least if the women in the CDU/CSU parliamentary group have their way. When they recently paid her a visit at the chancellery, Merkel said the idea was certainly worth talking about. And even Finance Minister Schäuble recently found time to discuss the project with the CDU/CSU women's group and von der Leyen.

The conservatives are moving to the left, as the subject of the minimum wage also demonstrates. During Merkel's period in office, more minimum wages were introduced in Germany than under all SPD-led governments in the past. The CDU/CSU is close to completing its universal minimum wage project, which is to be set by a commission of employers and employees, with an arbitrator reaching a decision, if necessary. A task force within the CDU/CSU parliamentary group plans to officially unveil the model after Easter.

The strategy of social warmth is closely coordinated with the CSU. In recent months its leader, Horst Seehofer, repeatedly urged the chancellor to defuse contentious social policy issues, so as to avoid giving the SPD any targets. "The CDU/CSU cannot appear to be a party of social coldness," say officials at the party's Munich headquarters. Seehofer is also still suffering from the trauma of a failed election campaign in 2005.

But Merkel's charity program also comes at a high price. The wage agreement for public-sector employees alone will cost the federal government €1.7 billion a year. The child care subsidy with which Merkel wants to delight the CSU and housewives will cost another €1.9 billion. And the costs will grow even more if the women in the CDU/CSU parliamentary group get their way and childcare is reflected more strongly in pensions. This alone would end up costing €3.5 billion.

Although the German economy is currently in such good shape that new social benefits will not immediately tear holes into the budget, the 2013 federal budget also shows how unstable the situation is. Schäuble has to plan for €20 billion in new borrowing, even though tax revenues are expected to increase by almost 3 percent, to €257 billion. If the economy worsens, it will be difficult to achieve an almost debt-free budget by 2016.

This doesn't trouble Merkel. For her, the only thing that counts at the moment is the fact that 2013 is an election year, and she wants to make sure that voters see her as a caring leader and not as a cold-hearted chancellor. She fears nothing more than the SPD's charge that she has no compassion for the poor and the disadvantaged. At the moment, however, she can feel relatively safe on this issue.

Even the unions are impressed by Merkel's new approach. When Michael Sommer, the head of the Confederation of German Trade Unions, celebrated his 60th birthday in mid-January at a private event at the Berlin Ensemble theater, half the cabinet was there, and the chancellor gave a speech. At the very least, the mood between the government and labor representatives couldn't be better. "Merkel exudes the feeling that she belongs to us," says a mildly amused senior trade union official. 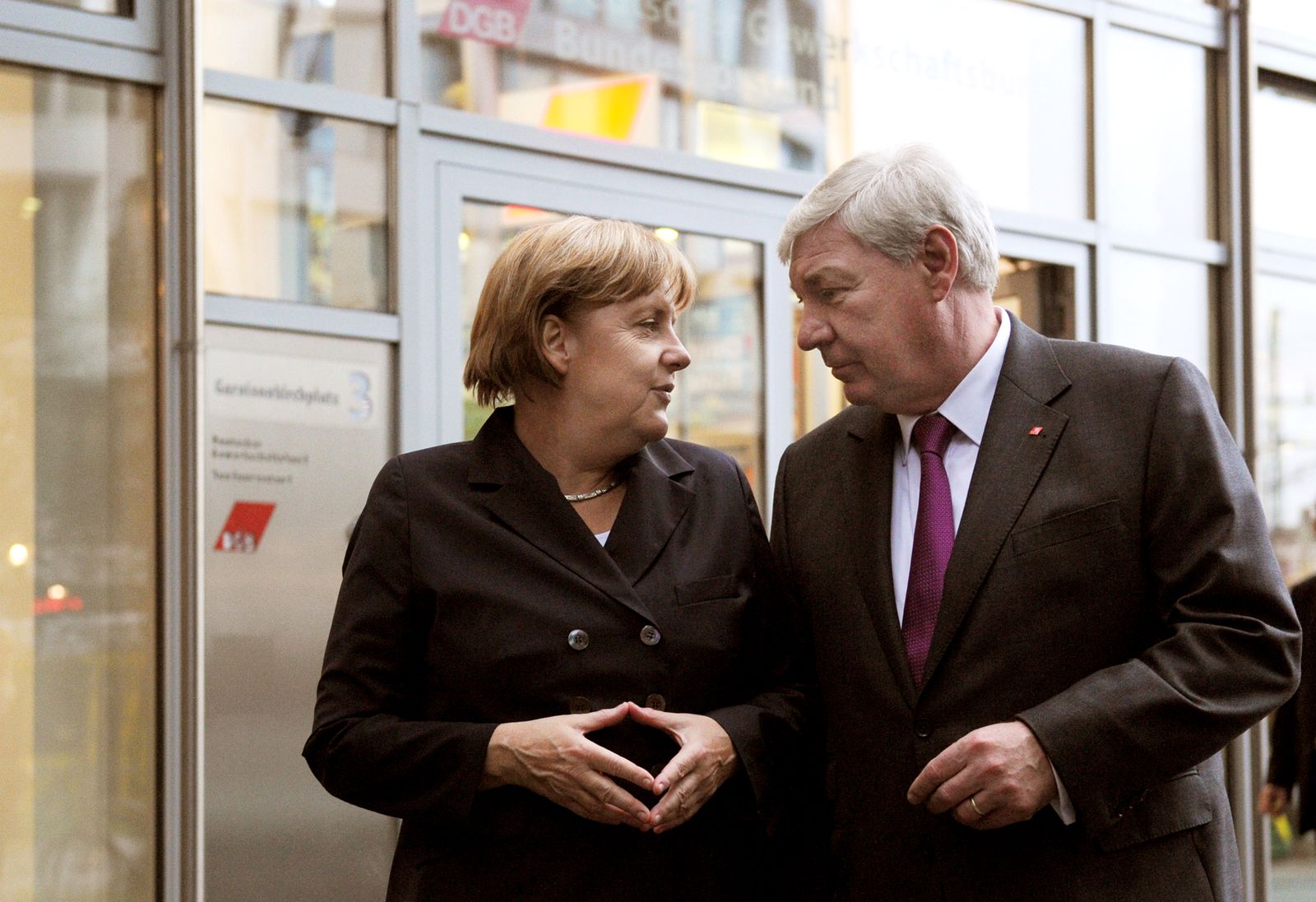