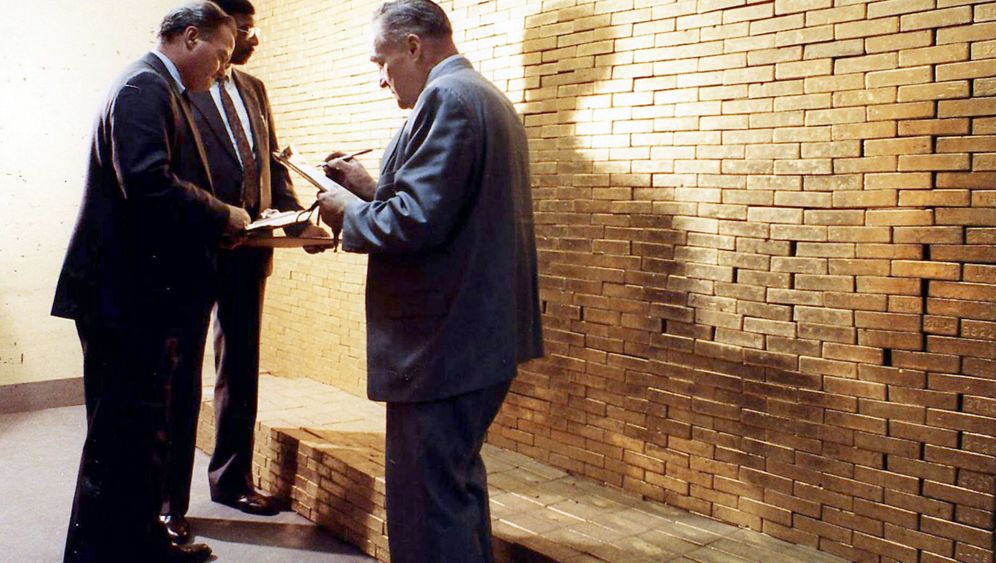 Bundesbank President Jens Weidmann wanted to personally convince Peter Gauweiler that the German gold was still where it should be. Early this summer, the head of Germany's central bank took the obstinate politician from the conservative Christian Social Union (CSU), a party that is a member of the government coalition in Berlin, and a number of his colleagues into the Bundesbank's inner sanctum: the gold vault.

There, 6,000 gold bars are stacked on industrial-strength shelves in a purpose-built building in Frankfurt. An additional 76,000 bars of bullion are stored in four safe boxes, in sealed containers.

But even this personal inspection wasn't enough to reassure the visiting member of parliament -- on the contrary: "The Bundesbank monitors its domestic gold in an exemplary fashion," Gauweiler says, "and this makes it all the more incomprehensible that the bank doesn't look after its reserves abroad."

For quite some time now, Gauweiler has been pestering the government and the Bundesbank with questions concerning where and how the country's reserves are stored, and how often they are checked. He has submitted requests and commissioned reports on the topic.

Last week, Gauweiler celebrated his greatest triumph to date in his gold campaign, which has been a source of some amusement for many fellow German politicians: A secret report by the Federal Audit Office had been made public -- and it contained stern criticism of the German central bank in Frankfurt. The Bonn-based auditors urged a better inventory system, including quality checks.

This demand, which even the bank's inspectors saw as nothing more than routine, alarmed the Berlin political establishment. Indeed, the partially blacked-out report read like the prologue to an espionage thriller in which the stunned central bankers could end up standing in front of empty vaults in the US.

For decades, German central bankers have contented themselves with written affirmations from their American colleagues that the gold still remains where it is said to be stored. According to the report, the bar list from New York stems from "1979/1980." The report also noted that the Federal Reserve Bank of New York refuses to allow the gold's owners to view their own reserves.

Not surprisingly, this prompted strong reactions in Berlin: The relevant Bundesbank board member Carl-Ludwig Thiele was summoned to Berlin to provide an explanation to the parliamentary budget committee. Heinz-Peter Haustein of the business-friendly Free Democratic Party (FDP) was even quoted by Germany's mass-circulation Bild newspaper as saying that "all the gold has to be shipped back."

The Bundesbank's otherwise reserved Thiele said that he found at least "part of the debate" to be "rather grotesque." His financial institution currently has more pressing problems. Bundesbank head Weidmann, for example, is desperately fighting the European Central Bank (ECB) decision to buy unlimited quantities of sovereign bonds from crisis-ridden countries as a way of lowering their borrowing costs. In addition, the Bundesbank has already pumped nearly €700 billion ($906 billion) into primarily southern European countries as part of the euro-zone central bank transfers known as Target II.

Germany's gold reserves are currently worth some €144 billion and are not stored "with dubious business partners," as Thiele stresses, but rather with "highly respected central bankers."

There is in fact nothing unusual about how Germany deals with the precious metal. Many other central banks store a portion of their gold reserves abroad. The Netherlands, for example, places its trust in its colleagues in Ottawa, New York and London.

But the relationship Germans have with their gold is a special one. Germany hoards nearly 3,600 metric tons of the precious metal -- only the US has more. Much of this gold treasure was amassed under the Bretton Woods international monetary system, in which the dollar served as the world's key currency and was directly convertible to fixed quantities of gold.

Before the gold standard was terminated in 1971, the current account surpluses generated by Germany's "economic miracle" were partially balanced out in gold. Thousands of US bars of gold alone were transferred to German ownership.

But since the euro is not backed by gold, such vast reserves are actually no longer necessary. Nevertheless, the Germans continue to resolutely defend them -- and every attempt to use this treasure has been met with dismay.

There has been no lack of proposals: Former German President Roman Herzog wanted to sell the gold to form the basis for a capital-based nursing care insurance scheme. In 2002, FDP parliamentary floor leader Rainer Brüderle proposed a fund for natural disasters. Former Bundesbank head Ernst Welteke added to the debate by suggesting the foundation of a national educational fund. But none of these ideas were ever taken seriously.

Most recently, German Chancellor Angela Merkel of the conservative Christian Democratic Union (CDU) shot down an idea by the euro partners to use the reserves as collateral for euro bonds.

As a result, in addition to safeguarding the reserves of over 60 countries, the Federal Reserve Bank of New York continues to hold 1,536 metric tons of German gold -- or nearly half of Berlin's reserves. This enormous hoard of gold is stored in the fifth subfloor of the bank's building on Liberty Street, 25 meters (80 feet) below street level, and 15 meters below sea level. According to the bank's website, the vault rests on the bedrock of Manhattan Island.

Tourists are allowed to venture below street level to see the vault. After descending in an elevator, they stand in front of an enormous steel cylinder that pivots like a door in a 140-ton steel-and-concrete frame. But not even the owners are allowed to view their own gold. According to the Federal Audit Office report, the Fed explained that "in the interest of security and of the control process" no "viewings" are possible.

Finally, in 2007, "following numerous enquiries," Bundesbank staff members were allowed to see the facility, but they reportedly only made it to the anteroom of the German reserves.

In fact, auditors from the Bundesbank made a second visit in May 2011. This time one of the nine compartments was also opened, in which the German gold bars are densely stacked. A few were pulled out and weighed. But this part of the report has been blacked out -- out of consideration for the Federal Reserve Bank of New York.

"I would like more transparency on the issue," says Bundesbank board member Thiele. The Americans are very sensitive, though, when it comes to security procedures in their gold storage facilities. In their second major depository, the legendary Fort Knox, practically no one in recent decades has been allowed to view the gold reserves.

Such intense secrecy fuels legends. Many conspiracy theorists have suspected for decades that the German gold has long since disappeared. Others believe that it has been lent out. They contend that there are only promissory notes of little worth stored in the bank's vaults.

Another myth that has been making the rounds in nationalist-oriented German circles is that the US refused to hand over the treasure and threatened during the Cold War to withdraw its troops from Germany if the Germans demanded their gold back. Former Bundesbank head Karl Blessing, according to the theory, had to provide the US written confirmation that he would never do such a thing.

This letter, as it happens, actually exists, as Blessing confirmed in his last interview with SPIEGEL in 1971 -- except it doesn't concern the German gold, but rather US gold reserves. Until 1971, every dollar could be exchanged for the precious metal. Blessing thus promised the US Federal Reserve that he would no longer convert the colossal German dollar reserves to gold because this would have caused the currency's value to plummet.

Today, this historic document is even available online. But that hasn't silenced those who oppose stockpiling German gold abroad. Instead, the debate over a collapse of strictly paper-based currency is experiencing a renaissance -- as is the dispute over the gold reserves. Even Green Party financial expert Gerhard Schick has joined the fray: "I think the question of how much gold is available in an emergency is a valid concern."

From a purely logistical perspective, though, returning the reserves seems outlandish. One cannot simply pack 1,500 tons of gold into an Airbus A380 super-jumbo jet and fly it back to Germany.

The Bundesbank also objects to this notion for another reason. It says the gold is supposed to act as an emergency buffer. In the extreme situation of a currency collapse, the bankers say that the gold bars could easily and quickly be exchanged on location for pounds or dollars to pay urgent bills.

In a bid to calm the debate, the Bundesbank has pledged to bring back and inspect 150 tons of gold from abroad over the next three years. Furthermore, there are plans to count and weigh the gold bars stored in one of the nine chambers at the Fed in New York -- although no date has been set for this.

Bundesbank board member Thiele was also recently in New York where he took a look behind one of the vault doors. He had good news for the members of the parliamentary budget committee: "There was no paper in there, just gold."

But that's not enough for CSU politician Gauweiler. He's only prepared to put the matter to rest when the central bank has thoroughly inspected all the German reserves throughout the entire world. His credo: "The Bundesbank is independent, but it can't do what it wants."