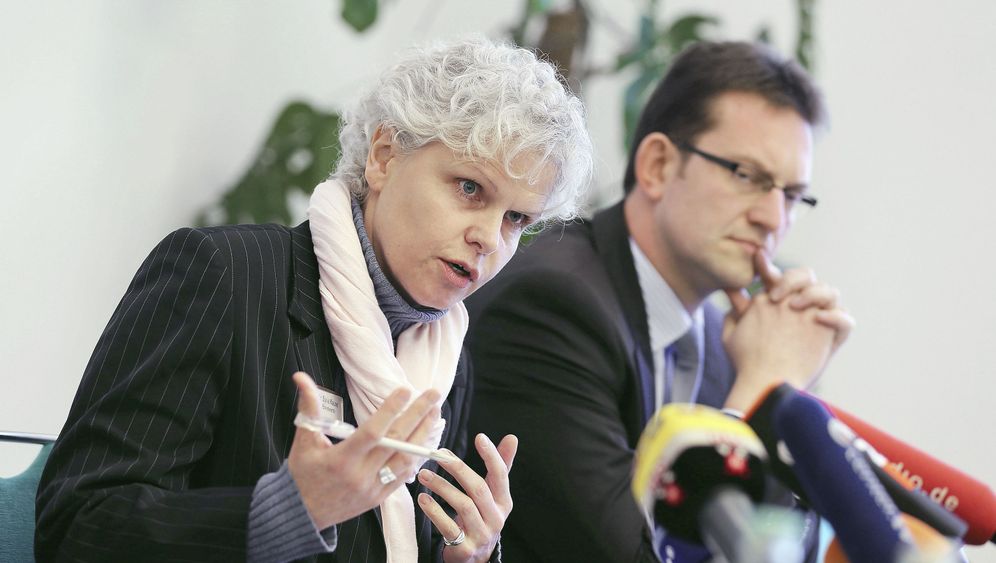 The origins of the Cellitine sisters and their beneficial ministry date back to late 13th-century Cologne, when the nuns devoted themselves to the "care of the sick, the weak and the poor."

Their original mission has expanded into a corporation encompassing 16 nursing homes and 10 hospitals. The only problem is that care is precisely what has been lacking there recently. Wanting nothing to do with a possible early termination of a pregnancy, doctors working for the Cellitines turned away a woman who was seeking help shortly before Christmas, despite the strong suspicion that she had been raped.

Last week, the order publicly downplayed the case when it made national news, calling it "very regrettable" and "a misunderstanding."

Turning away rape victims can hardly be called a misunderstanding. On January 10, Sylvia Klauser, the order's chief ethics officer, explained to an emergency doctor the hospitals' procedures for handling rape victims. The notes the doctor made on the conversation reveal an astonishing aspect of the order's policy: As long as patients who have been raped are "responsive and capable of being moved," they are to be transferred "to a city facility." The apparent goal of the policy is to ensure that the nuns and doctors will not be confronted with a possible abortion.

The case reveals how far the Roman Catholic Church has distanced itself from German society, especially -- but not only -- in the area of sexuality.

Catholic facilities are increasingly sealing themselves off, often behaving as if they were part of a state within a state; a cosmos subject to its own rules, which are monitored by the pope and his bishops; and a world in which federal, state and local governments have little say.

Every year, Catholic dioceses receive billions in funds from obligatory taxes paid by church members. But when it comes to scandals, such as when sexual abuse is systematically covered up and remains uninvestigated for years, citizens have little influence and are left to experience how the church energetically defends its special rights.

The process of alienation is well advanced, and it would be a mistake to treat it as merely a problem for Germany's few remaining churchgoers. In fact, it potentially affects millions of Germans. The church is involved in many areas of society, including kindergartens, schools, hospitals and nursing homes. It is the second-largest employer in the country, after the government. It dictates the kind of life its doctors, educators, teachers and cleaning women are allowed to lead. It determines how children are raised. And it also decides -- on its own authority -- how patients are to be treated or, in some cases, turned away.

"The scandalous incidents in Cologne sharply contradict the Christian social mission," says Sylvia Löhrmann, deputy governor of the western state of North Rhine-Westphalia. The Green Party politician is a member of the Central Committee of German Catholics, a forum in which she wants to see the incident addressed. "Not helping a woman who has been raped is a violation of human decency. In doing so, the church harms itself more than anything," says Löhrmann, who is also the state's education minister.

The so-called "morning-after pill," a drug that can be administered to rape victims to prevent pregnancy, lies at the center of the controversy.

On December 15, a 25-year-old woman came to an emergency medical facility in the Nippes neighborhood of Cologne, claiming that she had been raped. The doctor on duty, Irmgard Maiworm, treated the victim. She notified the police and prescribed the morning after pill.

Maiworm then informed the nearby St. Vincent Hospital, which is run by the Cellitine order, that she was transferring her patient there for evidence-gathering purposes. But her Catholic counterparts refused to help. The Hospital of the Holy Spirit, also run by the nuns, likewise turned down Maiworm's request. The doctors at the church-run hospitals told her that their ethical guidelines required them to reject the patients. "I could hardly believe it," Maiworm says.

The Catholic doctors' reluctance is in keeping with the policies of Joachim Meisner, the conservative archbishop of Cologne. "Rape victims are transferred to other facilities," says his spokesman, "if the intention to take the 'morning-after pill' is evident."

Victims' rights groups are protesting. "Refusing to administer the morning-after pill to women who have been raped constitutes failure to render assistance, which is unjustified according to the Bible and incomprehensible according to Christian values," says Annegret Laakmann of the nationwide group Frauenwürde (Women's Dignity). "With this position, the official church is discriminating against raped women once again."

Anette Diehl of Frauennotruf Mainz, a women's emergency hotline, also wants to see a change in church policy. "A woman who has been raped needs comprehensive assistance right away. She can't simply be turned away for religious reasons in the middle of treatment and consultation."

Catholic organizations run some 420 hospitals throughout Germany. In their employment contracts, their roughly 165,000 employees are generally required to comply with the guidelines of bishops and the heads of religious orders. In fact, in some areas, the Catholic Church exerts a strong influence on the social welfare state. The church even has a monopoly in some rural areas, where it controls many facilities, from kindergartens to hospitals to nursing homes.

This complicates things for church employees. Since doctors, educators and caregivers often have no alternative to working for Catholic organizations, they are forced to comply with their guidelines.

Paradoxically, although the number of churchgoers has been shrinking for decades, the influence of bishops has been rising. In 1950, excluding ministers and members of religious orders, both the Catholic and Protestant churches in Germany had 130,000 civilian employees, a number that has jumped to over a million today. What's more, Germany has gradually entrusted the churches with large parts of its social welfare system.

This results from a philosophy of streamlined government that encourages private organizations to acquire public assets, such as municipal utilities by international investors and hospitals and kindergartens by churches. What this policy has ignored, however, is that both financial managers and church officials pursue their own agendas rather than the objectives of the public sector.

"By turning over its responsibilities to the church, the government is accepting special rules that have their limitations in this day and age," author Eva Müller writes in her recently published book "Gott hat hohe Nebenkosten" ("God Has High Incidental Costs").

The consequences are often enormous for church employees. For instance, an employee who gets a divorce can quickly lose his or her job. And you don't have to be gay to be fired; sometimes all it takes is to express sympathetic views toward homosexuality. Couples who try artificial insemination also have no place in the church's employment.

Courts have repeatedly upheld the historical special status of religious orders. But are there no limits to the special rights the church enjoys? According to the Catholic belief, the catalogue of vices includes not only fornication and other "works of the flesh," but also envy, resentment, drunkenness, gluttony, and similar vices. If it were to be consistent, the church would also have to punish such infringements.

Between 90 and 100 percent of the funding for most of the Catholic Church's social facilities comes from the government. Nevertheless, politicians and citizens have rarely tried to exert their influence.

This changed in Königswinter, a city near Bonn in western Germany, where the director of a Catholic kindergarten was dismissed when her marriage fell apart. Local parents protested until the woman was given back her job. In fact, the Catholic Church was relieved of its position as manager of the kindergarten.

Hospitals in North Rhine-Westphalia, the state in which Bonn is located, could now be making similar threats. "If there was an official directive not to treat women who have been raped," says Barbara Steffens, the state's health minister, "it's a violation of the hospitals' duty to provide care." In an extreme case, the Green Party politician envisions the elimination of entire facilities from the hospital plan. And this would hit the churches where it hurts: in the wallet.