At first glance, the project appears relatively harmless. A Muslim group in Germany has set as its goal the distribution of millions of free Korans, so that the holy book of Islam finds its place in "every household in Germany, Austria and Switzerland," as the project website (German language only) states.

For months -- though most noticeably during the recent Easter holidays -- followers of the Salafist imam Ibrahim Abou Nagie have been handing out copies at information stands in city centers across Germany. The group, which calls itself "The True Religion," claims that 300,000 copies have already been distributed.

Increasingly, though, skepticism of the project is mounting among leading politicians in Germany, not least because of Nagie's own radical interpretation of Islam. Indeed, last autumn Nagie was indicted for public incitement to commit criminal offenses and for disturbing the religious peace.

And on Thursday, daily Die Welt reports that a video made a brief appearance on YouTube this week apparently targeting journalists that reported critically on the Koran distribution project. "We now have detailed information on the monkeys and pigs who published false reports about the (Frankfurt Salafist group) DawaFFM and many other brothers and sisters," the video, which has since been taken down, intoned, according to Die Welt.

"We possess a lot of information, for example, we know where you live, we know what football team you root for, we have your mobile phone numbers," it continues. The video names reporters from the dailies Frankfurter Rundschau and Tagesspiegel. Die Welt reports that the producer of the video has worked for Nagie in the past.

Separate from those revelations, the Ulm-based publishing house Ebner & Spiegel (which is not connected to SPIEGEL magazine), which is printing the Korans being handed out across the country, has suspended deliveries and is now examining possibilities for backing out of the contract.

The move was a reaction to the growing political debate in Germany focused on the Koran distributions. Although the Salafist info-stands have been making appearances in pedestrian zones of German towns for months, it is only now that politicians of all stripes have begun addressing Nagie's mission.

In particular, as many make clear, it is the Salafist movement itself that most find objectionable. Germany's Federal Office for the Protection of the Constitution (BfV), the country's domestic intelligence agency, estimates that there are between 3,000 and 5,000 Salafists in Germany. The Berlin office of the BfV warns that the Salafist ideology is almost identical to that of the al-Qaida terrorist network. More concerning, the group has a growing number of followers in Germany. Furthermore, Arid U., the man who was sentenced to life in prison in February for shooting to death two American servicemen at Frankfurt Airport in 2011, reportedly had ties to Salafism.

Günter Krings, a senior member of Chancellor Angela Merkel's Christian Democratic Union, told the Rheinische Post that "wherever possible, this aggressive action must be stopped. While the distribution of religious writings is in principle unobjectionable … the aggressive actions of the radical Salafists have disturbed the religious peace in our country."

Green Party co-leader Cem Özdemir was likewise clear in his condemnation of the Salafists. "I have a problem with all religious groups that place their world view above the constitution and above human rights. That applies as well to those Salafists who invoke violence and whose ideology fuels Islamist terrorism," he told Die Welt.

Spokespersons from other political parties have also expressed concern about the Koran distributions, though the business-friendly Free Democrats, Merkel's junior coalition partner, said that they doubt whether the project could be banned. Some leading German Muslim groups have also criticized the Salafists out of concern that the group is seeking to portray itself as the only true representative of Islam in the country. 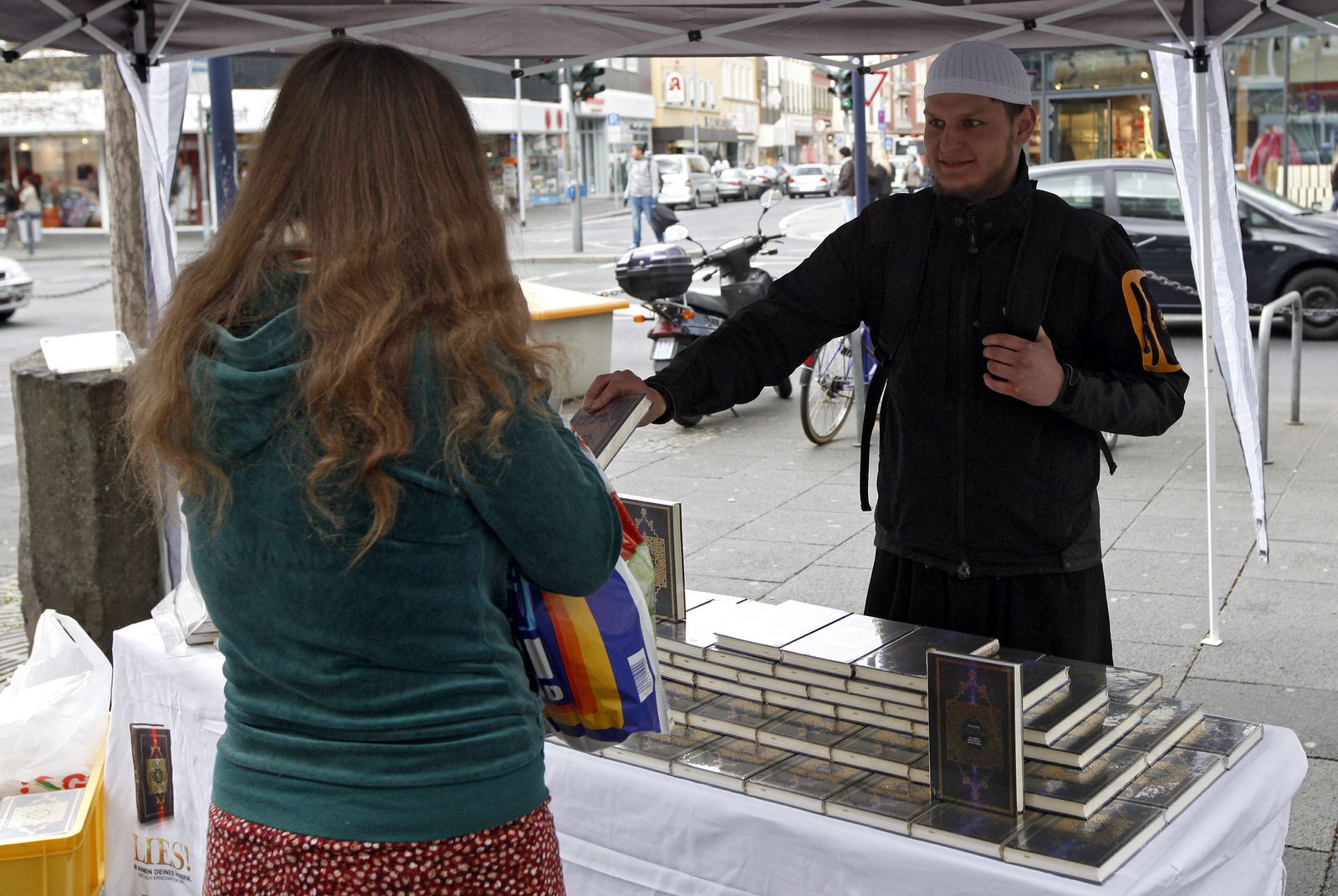 A Salafist hands a Koran to a passerby in the western German city of Offenbach.