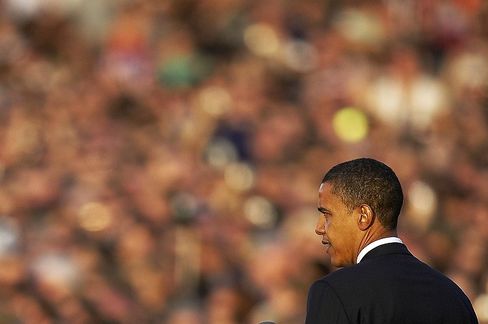 Obama's speech earned him praise from politicians on the left and right. But not everyone was impressed.

Barack Obama was greeted on Thursday night with words of praise from the left and the right. With his speech at Berlin's Siegessäule, or Victory Column, the Illinois senator appears to have impressed most German politicians across the political spectrum. But some political experts thought the speech was an "unsuccessful sermon" or amounted to nothing more than empty rhetoric.

Berlin Mayor Klaus Wowereit of the left-leaning Social Democrats praised Obama's speech for being strong and gutsy. "It's a sign," Wowereit said after the speech, "that US politics will take a new course, and it's an homage to Berlin."

Of the many Berlin-centered details in the speech, Obama mentioned the period of the Berlin Airlift 60 years ago, when US and British airplanes delivered supplies to the city as it was blockaded by the Soviets. Wowereit said that the friendship born between Germans and Americans as a result of the airlift serves as an example of how far people can come in overcoming the challenges of the world if they learn to work together.

Horst Teltschik, a former adviser to ex-Chancellor Helmut Kohl, told SPIEGEL ONLINE: "A brilliant, yet ambivalent appearance: Presidential candidate Barack Obama comes to Germany for the first time and holds a public speech on one of Berlin's most popular squares. Will a German candidate for chancellor in the election campaign of 2009 want to speak to Americans at the Washington Monument?"

"His opponent, John McCain, has been coming to Germany every year for decades. He knows all the most important politicians personally. An appearance by him would be far less spectacular. Still, it was good that Obama came to Berlin. His talks with Chancellor Merkel and Vice Chancellor Steinmeier were more important than his speech, as they could be future partners. It was also good because Obama's German supporters should now ask themselves if they would be prepared to elect a black German as chancellor, thereby pulling down the social walls that Obama also talked about."

Even Edmund Stoiber, the honorary head of Germany's Christian Social Union party -- the Bavarian sister party to the conservative Christian Democrats -- and former governor of the state of Bavaria, admitted to being impressed by the speech. "The young senator embodies what many people yearn for: charisma and leadership," Stoiber told SPIEGEL ONLINE. "But German politicians will also have trouble meeting his demand to assume more common responsibility for global problems in the world. America is relying on Germany and Europe. This strengthens the trans-Atlantic bridge."

Klaus Bölling, a former government spokesman under ex-Chancellor Helmut Schmidt, told SPIEGEL ONLINE: "It was a sermon and an unsuccessful one at that. The intellectual gulf between him and John F. Kennedy could not be overlooked. Apart from the niceties and talk about Berliners' love of freedom, there wasn't a single original thought. Instead, there was just a feeling of 'All people should become brothers.' A world without nuclear weapons? Nice idea, but if Obama gets elected that becomes nothing more than rhetoric."

"In America the demystification process of the candidate has already beguan and continues. Our politicians -- especially our chancellor -- will have noticed that Obama can't convincingly pull off trying to look like a fount of new ideas for the Western world. But, in this country, it's not a very popular thing to say out loud."

Historian Heinrich August Winkler told SPIEGEL ONLINE: "The message was overdue: 'We can't afford to be divided.' In Berlin, Barack Obama expressed what the current president could not say without being laughed at: What divides Europe and the US is by no means as big as what the West has in common. We might argue over the consequences arising out of Western values, but our values are the same."

"Obama referred to the fight for freedom and the rule of law. If he is elected president, he will be measured by the ideals that he spoke about in Berlin. There will be trans-Atlantic differences even under a President Obama. But, if after eight years of unilateralism, we manage to return to 'partnership and cooperation,' those differences will appear less dramatic, and what we hold in common will much more clearly come to the fore."

Following the address, Eckart von Klaeden, the foreign policy spokesman for Germany 's ruling conservative Christian Democrats, described it as an "impressive speech." "It was American in the best sense of the word," Klaeden told SPIEGEL ONLINE. "With the exception of a few personal nuances, John McCain also could have given a very similar speech."

Klaeden spoke about Obama's "perfect campaign performance," saying that the speech's main message was that Europe and the US can bring the world's problems under control if they stand together. "That also entails burden-sharing and common sacrifices."

Gert Weisskirchen, the Social Democrats' chief foreign policy spokesman in parliament, told SPIEGEL ONLINE: "This was the speech of a citizen of the world, which wasn't only addressed at Germans or Europeans, but also at Americans."

Obama's most important message was "that Europe and the US can only solve the world's problems and crises -- from climate change to the resolution of armed conflicts -- together." To achieve this, the trans-Atlantic relationship had to be renewed "on a basis of ideals."

Michael Müller, the head of the Social Democratic Party in Berlin, said he was impressed by Obama's ability to pull in the crowds. In his speech, Obama had stressed the responsibilities Americans and Europeans shared, such as confronting globalization. In that sense, Müller believes the speech had a very different feeling than those of previous US politicians.

Voker Ratzmann, head of the Green Party in the Berlin city government, concurred with Müller. He described the speech as "very balanced," adding that he was sure Berliners had seen the "future president of the US" speak.

Obama gave his much-anticipated speech, which was just shy of 30 minutes in length, on Thursday evening in front of a crowd of an estimated 200,000 people. He called for the international community to fight to free the world of nuclear weapons, to rid itself of terrorism and to protect the climate.