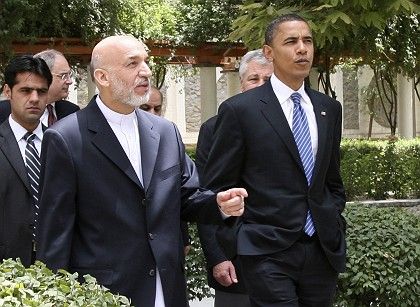 In the run-up to Barack Obama's visit to Berlin, leading foreign and security policy experts for Germany's center-left Social Democratic Party (SPD) are warning the United States presidential candidate against making any far-reaching demands on the Germans.

"Obama should only ask of us what we are able to deliver," Niels Annen -- a member of Germany's federal parliament, with the left wing of the SPD -- told SPIEGEL ONLINE Monday. "We won't increase our number of troops."

Chancellor Angela Merkel's cabinet, however, has approved a plan to increase the number of troops from Germany's armed forces in Afghanistan by 1,000 to 4,500 soldiers. All troop deployments of the Bundeswehr require a mandate from the German parliament, which is expected to consider the issue in the autumn. And SPD party chief Kurt Beck made clear over the weekend that 4,500 was the ceiling of what could be expected from Germany. The Social Democrats -- who are the junior partner in the grand coalition government with Merkel and her conservative Christian Democrats -- are hoping Obama will take heed of German sensitivities when he visits Thursday.

"The senator is smart enough to give a speech here that will be met with applause," Annen said.

The party's defense policy spokesman, Rainer Arnold, also called on Obama to be cautious. "It's part of NATO custom not to overburden partners," he told SPIEGEL ONLINE. "There is no point in issuing demands that the partners cannot fullfil."

In his speech on Thursday at Berlin's Siegessäule, or "Victory Column," Obama is expected to ratchet up pressure on Washington's NATO allies. In doing so, he also intends to send a signal back to voters in the United States that, in the future, the burden-sharing during war will be greater between partners.

Eckart von Klaeden, the foreign policy speaker for the Christian Democrats' parliamentary group, said one must keep in mind that, during his visit to Berlin, Obama will primarily be addressing American voters. "He may be speaking in front of Germans, but his message is aimed at Americans," von Klaeden told SPIEGEL ONLINE.

Obama has already called on America's allies several times to increase their military involvement. "It would raise questions in America if he didn't say anything about Iraq and Afghanistan during his most important speech to be given in Europe," von Klaeden said, "especially right after having visited both countries."

In an interview with SPIEGEL published on Monday, Susan Rice, the Obama team's foreign policy advisor, provided a preview of the kinds of demands Germans could expect from the candidate. Rice said both NATO allies and the United States must allocate greater resources to Afghanistan and send more troops to the Hinda Kush. In addition, she said, allies should also "lift operational restrictions" on these troops. Rice's statement appeared to be a reference to Germany's Bundeswehr, which is responsible for peacekeeping and reconstruction in northern Afghanistan. German troops have so far largely been spared from undertaking missions in the hotly contested southern part of the country, where insurgents and the Taliban have caused a high number of NATO casualties.

Obama's visit to Kabul this past Saturday is also being seen as symbolic in Berlin. Prior to visiting with Afghan President Hamid Karzai, Obama traveled to eastern Afghanistan near the porous border region with Pakistan, where some of the heaviest insurgent fighting has taken place. A week ago, nine US soldiers were killed by militants in the region. On Saturday, Obama came here to demonstratively pay tribute to combat troops and not soldiers whose work has been restricted to reconstruction.

Still, Obama isn't expected to make a one-sided demand on Europe to increase its participation, either. If he is elected president, he has proposed relocating 10,000 US soldiers from Iraq to Afghanistan -- a proposal that has been met with enthusiasm in Germany. If Obama calls on Europeans to follow the Americans' example, it could also make it more difficult for the Germans to categorically reject such proposals.

Regardless whether Obama makes the request concretely during his speech in Berlin or through diplomatic channels, experts on trans-Atlantic relations say they are still expecting him to demand a greater German role in Afghanistan. "Obama will expect that the Germans also take over dangerous missions, not just leaving the Americans and Brits to do the dirty work," says Stephen Szabo, director of the Trans-Atlantic Academy in Washington, D.C. And that could yet again reignite the debate in the United States over why Germany is unwilling to enter into combat.

Uncertainty over how strong Obama's words will be has fuelled concern in Germany, especially within some parts of the Social Democratic Party, where a general sense of anxiety has dampened excitement over the political superstar's imminent visit. Politicians here emphasize again and again how much they are looking forward to Obama's visit. Germany's Social Democrats see the Democratic Party hopeful as belonging to their political camp, but they are at the same time already drawing their political lines in the sand -- at least on the issue of Afghanistan.

Germany is already the third biggest provider of troops to the NATO-led ISAF mission in Afghanistan and it has no reason to be shy about that fact, SPD foreign policy spokesman Gert Weisskirchen told SPIEGEL ONLINE. If Obama does ask for additional troops, he said, the Bundestag would consider that and any other requests "very carefully  and responsibly."

Meanwhile, defense expert Arnold recommends that Germany shouldn't always feel that Berlin is the only European capital being addressed when the US demands more participation from its allies. If need be, Arnold suggests, Germany could offer additional police trainers and other civilian experts.

It is clear to members of both the SPD and CDU that basic foreign policy conflicts between Germany and the United States wouldn't be radically different under a President Obama than they have been under President Bush.

Months back, Karl-Theodor Freiherr zu Guttenberg of the Christian Social Union, the CDU's Bavarian sister party, warned Social Democrats against getting overly optimistic about a change of course in foreign policy under Obama, should he be elected. Prior to the Illinois senator's visit to Berlin this week, Guttenberg is also warning Germans to manage their expectations. "Afghanistan and Iraq will certainly play a role in his Berlin speech," he told SPIEGEL ONLINE. As a candidate, however, Guttenberg said he didn't believe Obama would issue any concrete demands. But even if he doesn't do so now, he said, "he will at the next NATO summit in the next year at the very latest -- assuming he is elected president."

At that summit, Guttenberg -- who is the CDU/CSU's leading politician on the Bundestag's Foreign Affairs Committee -- said that it's possible there could be a "realignment" of foreign policy that would include "related new demands on the allies."

The conservative CSU politician said that Germany would, of course, emphasize its recent decision to send an additional 1,000 troops to Afghanistan, making it one of the largest suppliers of troops in the region. But Guttenberg said he was unsure whether that would make much of an impression. "It can't be ruled out that a Obama, as president of the United States, would call for more soldiers at a later point in time or for other forms of participation."