The Cologne police this year took to Twitter to wish users of the social media platform a happy new year. And they did so in four languages: German, English, French and -- Arabic. The content of the message was the same in all four cases, namely best wishes for a healthy and successful 2018.

It could have been such a harmonious start to the year, but peaceful Muslims or even Arabic new year's wishes sent out by officials in Germany doesn't fit into the worldviews of people like Beatrix von Storch, deputy floor leader of the right-wing populist Alternative for Germany (AfD) party. "What the hell is going on in this country?" she tweeted. "Why is an official police account ... tweeting in Arabic. Do you think that will appease the barbaric, Muslim, group-raping gangs of men?"

Storch's message, one which blanketly accused Arab men like Mohamad Fares and Abo Omar Sannib of being violent criminals, was blocked a short time later for Twitter users in Germany while Storch's account was suspended for 12 hours. Facebook also took action against Storch, while Twitter likewise targeted the account of AfD floor leader Alice Weidel, who had rushed to support Storch with aggressive postings of her own.

It would have been difficult for the social media giants to give the AfD a bigger new year's gift. The right-wing populists suddenly dominated the headlines in a post-holiday period in which there wasn't much competition in the news cycle. And they were able to present themselves as a victim of one of the AfD's most hated enemies: Justice Minister Heiko Maas.

Since Jan. 1, 2018, a new law called the "Act to Improve Enforcement of the Law in Social Networks" has been in full effect in Germany, a measure that requires social media sites to become more proactive when it comes to illegal postings by their users. The penalties leveled almost simultaneously against Storch and Weidel by the two Internet companies hand the AfD a powerful propaganda tool, with the party claiming that the beginning of 2018 has meant "the end of the freedom of opinion," as AfD co-leader Alexander Gauland said. He added that the new law reminds him of "Stasi methods," a reference to the notorious East German secret police.

None of that is true, however, and there are several factors that have become muddled in the debate. The behavior of private companies is being confused with action taken by the police, state prosecutors and the federal government. The AfD isn't the only beneficiary of this confusion. Twitter and Facebook are also likely to be pleased that the fury of internet users is being directed at Maas -- and not at the internet companies' own problems when it comes to applying the new law. The standards adhered to by the social media giants when dealing with hate, race baiting and legal violations have always been impenetrable and contradictory. Those employed with patrolling such postings have long been overwhelmed by the task, and the companies in question have never taken their clear shortcomings seriously enough.

But since new year's day, their silence and the associated problems have reached a new level. Twitter, in particular, is taking a tough stance, even taking action against harmless satirical postings, while company officials seem to have gone into hiding. But here too, the anger of internet users hasn't been directed at the multibillion-dollar companies in Silicon Valley, but at Heiko Maas.

To be sure, the law in question, referred to simply as NetzDG in German, has its weaknesses and likely violates European Union law -- and perhaps even the German constitution. Legal challenges against the law are currently being prepared.

But the law's shortcomings primarily have to do with formalities and bureaucratic procedures. The content of the NetzDG, something that Maas has also been emphasizing, isn't significantly different from the law that previously applied. "The requirement that social network operators delete illegal content already applied," Maas says. "But the operators of social networks haven't been fulfilling the requirement. Those who disseminate illegal content on the internet must be invariably prosecuted by the judiciary and brought to justice."

The new law is merely designed to ensure that "already applicable law is effectively enforced," Maas says. But the text of the NetzDG hasn't done much to improve the situation. The rules companies are expected to follow have become more ambiguous while the deadlines are now firmer. Content that is "manifestly unlawful" must be removed within 24 hours of receiving a complaint. Critics of the law, such as Nicola Beer of the business-friendly Free Democratic Party (FDP), argue that those monitoring social media postings will likely only have mere seconds to identify legally problematic postings given the flood of complaints that roll in every day.

Bernhard Rohleder, head of the Federal Association for Information Technology (Bitkom), is also critical. "What we will see are essentially private kangaroo courts in social media that will pass judgment and hand down sentences within 24 hours."

But the penalties meted out to the AfD politicians after new year's have little to do with the new NetzDG. The law makes no mention of temporary bans for users and the criminal complaints filed against Weidel and Storch for incitement have come from the Cologne police department and from other German citizens -- and not from the Justice Ministry or Twitter itself. Furthermore, the internet platforms themselves adopted anti-hate rules years ago, elements of which are even stricter than the German law -- at least theoretically.

The new law also doesn't force the platforms to take steps against satire accounts. This week, clearly legal postings from several different satirists have been blocked, including the account belonging to the German satire magazine Titanic, which had posted parodies of Storch's racist tweets. Twitter, though, has declined to answer questions regarding how such excessive intrusions on the freedom of opinion came to pass, whether by bots or by human monitors. The company has only noted that the suspension of users due to violations of Twitter rules had nothing to do with the new law. That, however, doesn't provide those affected with any protection against rash or unjustified suspensions or deletions.

For right-wing populists, there is much at stake when it comes to how Twitter and Facebook monitor their platforms for illegal content. Social media channels are a vital means for the party to approach its supporters free from the filter of critical media outlets. Authors of the postings are very aware that the more drastic the message, the greater the attention they will receive.

"In these times, a charge of incitement is like the new Federal Cross of Merit," says Jens Maier, a notoriously racist AfD parliamentarian from Saxony in reference to Germany's highest civilian honor. He, too, has recently run afoul of Twitter monitors, with a tweet that appeared on Maier's account on Wednesday quickly being deleted. The tweet referred to the mixed-race son of tennis star Boris Becker as a "little Halbneger," with the German word "Neger" standing in for both "negro" and for an even less savory racial slur. Maier has since said that a staffer is to blame for the tweet.

Within the AfD, it seems to have become some sort of status symbol to be banned by a social network, only to turn to a different platform to complain loudly of the alleged censorship. Doing so is nothing less than the misappropriation and abuse of the freedom of opinion. In contrast to Iranian protestors or Turkish journalists who criticize their authoritarian governments, the German populists are risking very little with their calculated provocations.

Either way, however, the German law isn't likely to be decisive when it comes to the approach taken by the social media platforms to controversial content. Much more important is the political situation back home. Since the election of Donald Trump, who has elevated Twitter to the White House's preferred method of communication, both Facebook and Twitter have found themselves, and their role in American democracy and political debate, subject to intense criticism -- including that coming from erstwhile allies such as Sean Parker, the first president of Facebook. This avalanche of disapproval has likely had more of an effect on the platforms' approach to controversial content than a law passed in faraway Berlin.

Indeed, Twitter tightened its global rules for dealing with hate and content glorifying violence on Dec. 18. Users must now delete incriminating tweets, with repeat offenders subject to permanent expulsion. Furthermore, after long ignoring the problem, Twitter is now also sanctioning those who use a "username, display name or profile bio to engage in abusive behavior."

The internet giants are primarily concerned about the wider message sent by German legislation. "We are concerned about the international effects of the German law," Richard Allan, policy director for Facebook in Europe, told DER SPIEGEL in December. "The Duma in Russia," he continued, referring to the Russian parliament, "proposed a law with similar language a short time later."

With the law only having gone into effect on Jan. 1, it remains impossible to adequately analyze its effects. The first indications, though, are that it is having some impact.

Facebook has hidden the newly mandated reporting form for users in the small print, behind the imprint and the terms and conditions. Furthermore, the company has hired the law firm Freshfields to deal with complaints, which is likely to reduce their chances of success even further. But it is now at least a little bit easier to report problems to the company.

The article you are reading originally appeared in German in issue 2/2018 (January 5th, 2017) of DER SPIEGEL.

The Federal Office of Justice, based in Bonn, has been made responsible for sanctioning systematic violations made by the social media platforms. By the evening of Jan. 3, the agency had received 21 complaints against Twitter and other platforms -- not a small number if you consider that users must first file complaints with the platforms themselves and wait 24 hours for a response before turning to the Federal Office of Justice.

The law also seems to have had an effect on openly disseminated neo-Nazi propaganda. Earlier this week, Twitter blocked several users who have been allowed for years to decorate their accounts with swastikas, SS symbols or pictures of concentration camps. Following complaints of "abusive profile information," a number of accounts with names like "Adolf Hitler, "Heil Hitler, "Sieg Heil!" and "Der Führer" were no longer reachable as of Wednesday. Users such as @DerFuehrer1, @siegheil_hitler and @Auschwitz_Kz were also removed.

A large number of accounts with similar names still exist, however. And far from all right-wing content has been blocked or sanctioned. In recent days, AfD members have been triumphantly posting emails from Twitter saying that posts of theirs had been reported but found to be unproblematic. Members of the Identitarian Movement, a right-wing extremist group which is under observation by domestic intelligence officials in Germany, have been doing the same.

Indeed, the number of complaints would seem to have risen to a greater degree than the number of sanctions. "Since the beginning of the year, a complaint has been filed against every tweet posted by the federal AfD account with just a single exception," says a party spokesman. Almost all tweets written by party leaders, the spokesman adds, have likewise been "denounced." Twitter has only taken action in a few cases, the AfD spokesperson admits, against Storch and Weidel. Shortly after, the company also deleted a tweet posted on an account belonging to the party's parliamentary group. A far cry from mass censorship.

But that didn't stop party head Alexander Gauland from stating the following on German public broadcaster ZDF: "Exactly what we have always predicted has now come to pass. Twitter is deleting certain tweets that aren't clearly in violation of the law. It has become a matter of taste. Freedom of opinion is at stake." 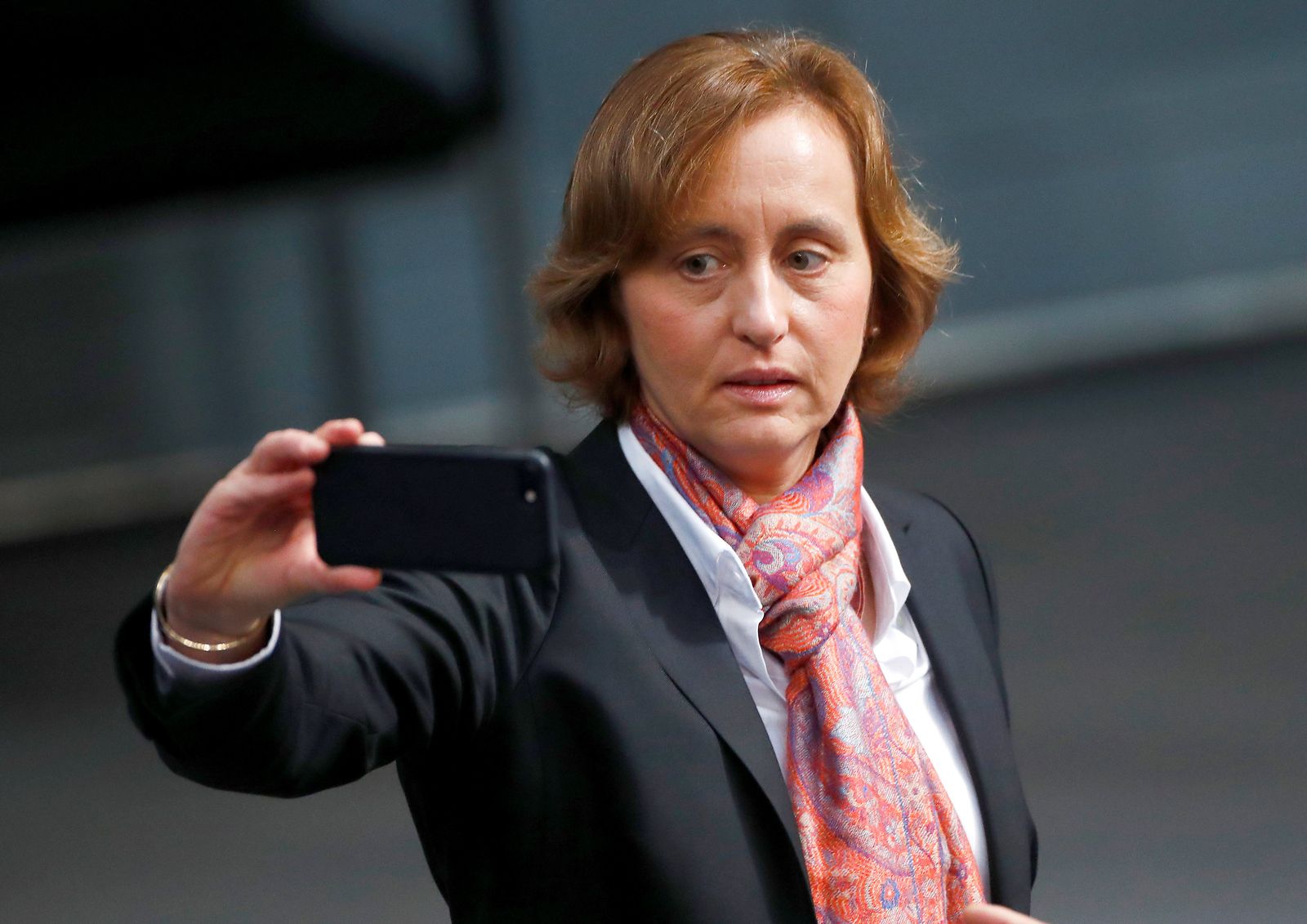