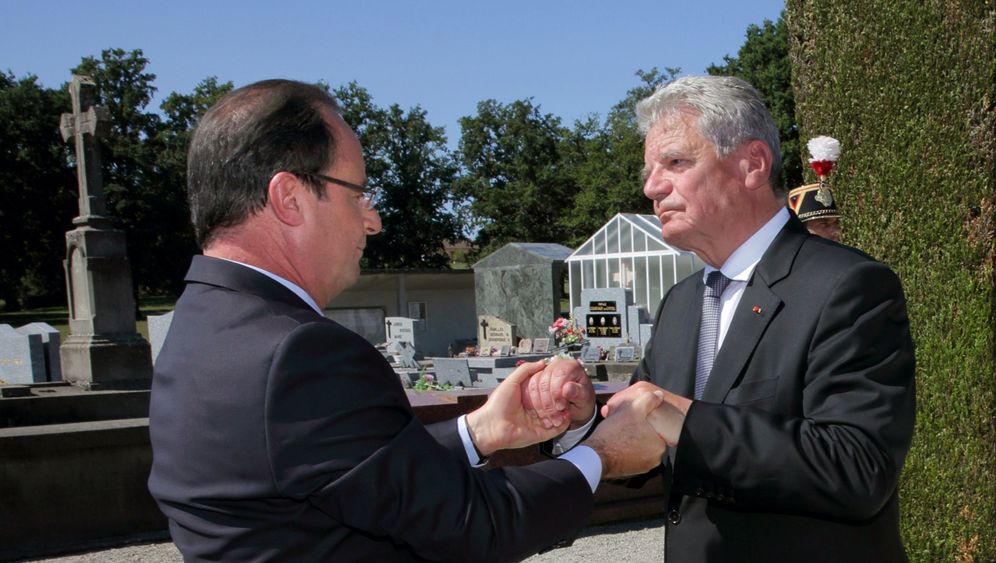 German President Joachim Gauck stands speechless at the place where the central market of Oradour-sur-Glane once stood. He is surrounded by ruins. Since the massacre perpetrated by the Waffen SS on June 10, 1944, Oradour no longer exists. Robert Hébras, one of only six survivors of the massacre, wants Gauck to tell him why. Why did the German soldiers destroy this village?

But the sprightly, white-haired man has no answer. "They just did," he replies. Oradour was not a hub of the Resistance; even the delusional retribution logic of the SS cannot explain the barbarity. Hébras is left to wonder why he and those five others survived that day -- when 642 others lost their lives.

Joachim Gauck has come to Oradour on this beautiful late summer's day to apologize for the nightmare of 59 years ago. The sun is shining, not a cloud in the sky, as Gauck, together with Hébras and French President François Hollande, visit the remnants of the horror. Then-President Charles de Gaulle decreed after the war that the ruins of Oradour should be preserved as a perpetual reminder of what took place.

On that June day in 1944, the men of an SS Panzer Division called "Das Reich" ordered the inhabitants of Oradour to assemble in the village square and then moved them to several locations. Women and children were placed in the church. Hébras was taken to a barn. Hardly anyone in the village, he says, had an inkling of what was to follow. "I was talking with my friends about our football team's upcoming game," he says.

A few hours later his friends were dead, killed by machine gun fire or the huge blaze that the Germans spread throughout the village.

As Hébras recalls the horrific events to Gauck and Hollande, his tone is conversational, like that of a tour guide. That's probably because he's been telling the story for decades. As he leads the way through the ruins, he explains that because he was standing at the back of the barn, he was protected by the bodies of others and eventually was just barely able to escape the flames.

In France, everyone knows Oradour. The annihilation of the village is one of those historical events that remains in the collective memory of a nation -- and that, in this case, influences perceptions of the country's German neighbors. So it should come as no surprise that you can meet visitors in Oradour today, older men and women, whose views of Germany are indelibly marked by this terrible event. But Oradour is not a simple topic within France even to this day, because some of the SS men who carried out the murders were from Alsace.

Gauck is the first German head of state to visit Oradour. It took almost six decades until a serving senior dignitary visited this site of German shame -- despite Franco-German friendship, which celebrated its 50th anniversary earlier this year. Despite the many city partnerships, the countless student exchange programs.

The wound of Oradour is still deep in France. And probably it took a president from neighboring Germany with a background like that of Joachim Gauck -- a former pastor who is a staunch champion of democracy and was an anti-Communist activist in his native former East Germany -- to finally visit the site. When Gauck makes statements like, "as Germany's president I suspect, and as a human being I feel, just what this decision means for France and the French people," it doesn't just sound like empathy -- he seems to really mean it.

Yes, the former pastor is sentimental. But sentimentality is required from any German president who dares go to Oradour.

Robert Hébras leads the two heads of state through the Oradour cemetery and to the local memorial. Here they meet members of survivor associations and add their names to the memorial's guest book. Softly weeping, Gauck writes the following: "With horror, shock and disgust, I stand before that which was done under German command. I accepted the invitation humbly and gratefully. I can testify today that there is a different, peaceful and united Germany. So should it remain. Joachim Gauck."

Then he stands, hesitating, and finally puts his arms around Hollande's shoulders. They stay this way for a long moment. Shortly afterward the two leaders, together with survivor Hébras, come together in a three-way embrace.

It is a remarkable image -- for the French president as well. Sources at the Elysée Palace say that Gauck's visit to Oradour is viewed in line with the historic meeting between de Gaulle and then-Chancellor Konrad Adenauer in Reims in 1962 and the meeting between heads of state François Mitterrand and Helmut Kohl in Verdun in 1984.

Whether Gauck is thinking in such terms on this day is unknown. What's clear is that here stands a president who has truly taken this visit to heart. And one who is grateful for the opportunity -- grateful that he is able to represent a different Germany. "But through serious confrontation with this bitter history, the people in Germany have gained the strength to make my homeland a good nation," he says during his speech at the close of his visit.

On this day, Gauck is also a proud president.