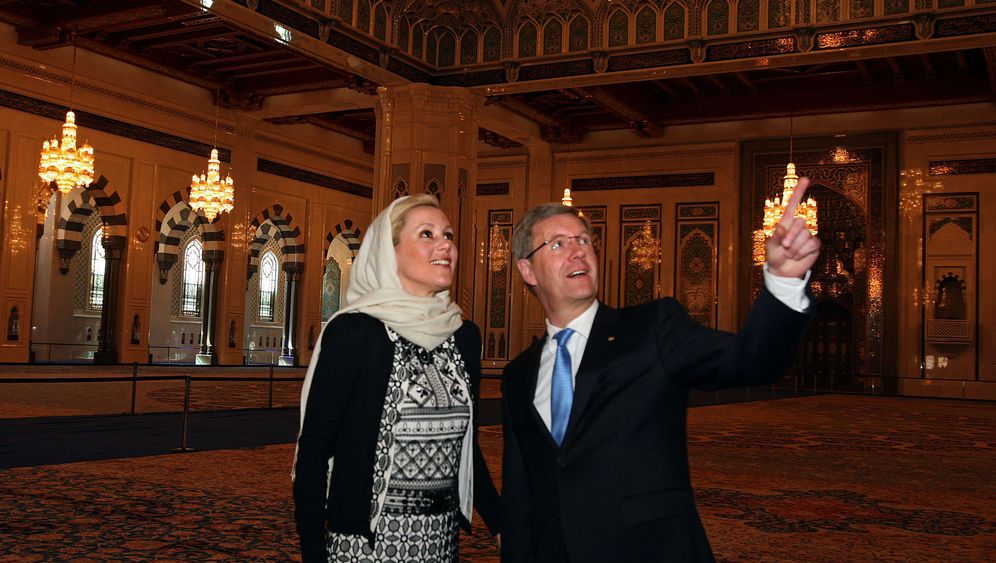 It was meant to be a nice winter trip. Oman, the United Arab Emirates, Qatar, Kuwait -- German President Christian Wulff and his wife Bettina have been visiting the Arabian Peninsula, getting in and out of electric cars, touring old Bedouin sites.

There have been great photo opportunities in the blazing sun. But the mood is likely to have darkened on the last stop of their trip, Kuwait, on Tuesday after a controversial chapter from Wulff's past caught up with him. He has had to field awkward questions about a €500,000 ($659,000) loan and whether he deliberately lied to the parliament of Lower Saxony in February 2010, when he was governor of the northern German state.

The president, a member of Chancellor Angela Merkel's conservative Christian Democratic Union (CDU) party, is defending himself and denying the allegations. But the tabloid Bild, which broke the story on Tuesday, writes: "The president has a problem."

Germany's best-selling daily is right about that. Wulff is under pressure. Why did he arrange a private loan and keep that fact hidden from the public? Did he provide or pledge anything in return? The affair is damaging his credibility as Germany's head of state.

It may well be that Wulff didn't formally break any rules. But the matter leaves an unpleasant aftertaste, especially for a man who, in his position as president, is expected to provide a moral compass for the nation. Besides, top politicians like him should know that the highest ethical standards are expected of them when it comes to accepting money. The affair has shown that Wulff lacks an awareness of how a political leader should behave. And this isn't his first lapse.

What happened? It started with a Christmas holiday that Wulff and his wife took in Florida in 2009. They spent a few days in the villa of a friend of theirs, the businessman Egon Geerkens. The vacation began with a free upgrade to business class from economy class for the Wulffs, courtesy of Air Berlin. That sparked controversy back home, and Wulff, conceding he had made a mistake, later paid the €3,000 that the upgrade would have cost.

The matter had no political consequences for him. But two members of the regional parliament from the opposition Green Party asked whether Wulff had at any point had business ties with the head of Air Berlin at the time, Joachim Hunold, or with Geerkens.

In response to the parliamentary question, Wulff issued the following statement on Feb. 18, 2010, four months before he was elected president: "There have been no business ties between governor Wulff and the persons and companies cited in the question in the last 10 years."

That seemed to be the end of the matter. But now it has emerged that it wasn't. Wulff had no business relationship with Geerkens -- but he did with Geerkens' wife. Wulff had borrowed half a million euros from Edith Geerkens back in October 2008 to buy a family home in the town of Burgwedel near the Lower Saxony capital of Hanover. The advantage of the private loan was that it came at a lower interest rate than the actual market rate.

Oddly, according to Bild, Wulff replaced the private loan with a standard mortgage shortly after the Green Party members submitted their question in parliament, even though the private loan arrangement was due to run until the end of 2013. Did the governor get cold feet?

A statement issued by Wulff's office on Tuesday insists that the question was "correctly answered." The question only referred to a business link with Egon Geerkens. "So the unambiguous question was truthfully answered in the negative."

Wulff's defense smacks of trickery, and worse, of an attempt to mislead -- and that has made him vulnerable.

"Evidently the parliament was not correctly informed or was misled at the time," says Stefan Wenzel, parliamentary group leader of the Green Party in the Lower Saxony parliament, and one of the two members who submitted the question last year.

Wenzel accused Wulff of "splitting hairs" in his answer in an attempt to keep his relationship with Geerkens "in the dark as much as possible." That could constitute a breach of the law, Wenzel said.

'Wulff Did Not Tell the Whole Truth'

Thomas Oppermann, a senior member of the opposition center-left Social Democrats, said Wulff had not lied to the parliament but added that he could understand why members of parliament were now angry. "Because Christian Wulff did not tell the whole truth," said Oppermann. "Special standards must apply to a German president. That is why Christian Wulff will have a big interest in resolving all questions."

The CDU was reluctant to comment on the matter on Tuesday and referred to the president's statement, which "says it all for now." But the allegations are likely to worry the party, which has fresh and unpleasant memories of the surprise resignation of Horst Köhler, the previous German president, in May 2010 and of the difficult search for a successor. Wulff himself got off to an inauspicious start. It took three rounds of voting for the Federal Assembly, the special parliamentary body convened to elect German presidents, to give Wulff the required majority.

And it took some time for Wulff to get accustomed to his new role. The last thing Merkel needs now is a debate about whether Wulff, whom she nominated for the presidency, is fit for the job.

The private loan isn't the only money-related controversy to have hit Wulff since he became president. He had only just been elected when he and his wife spent a few days on the Spanish island of Mallorca on an estate belonging to another entrepreneur, Carsten Maschmeyer.

Maschmeyer, who is also a friend of former Chancellor Gerhard Schröder, defended his invitation. The vacation, he said, had been planned long before Wulff became president, and Wulff had needed a holiday after winning a regional election in Lower Saxony.

Wulff paid a daily rent of €300 for the apartment, but he betrayed a lack of sensitivity for his new position by opting to spend his holiday in the property of a rich businessman friend. Wulff learned his lesson -- the controversy triggered by his visit prompted him to decline further invitations from businessmen.

Business Friendships Are a Minefield for Politicians

Wulff's case serves as a reminder that links between entrepreneurs and politicians can be a minefield for both sides. In 2004, when Joschka Fischer, foreign minister at the time, spent an Easter vacation with his friend Paul Achleitner, a top executive at insurer Allianz, he was attacked in the German media. Achleitner -- Fischer is godfather to one of his children -- said it was a purely private visit and the minister shrugged off the criticism. He was lucky -- the controversy died down quickly.

Green politician Cem Özdemir was less fortunate. Özdemir took a low-interest loan of 80,000 deutsche marks (€40,900) from a PR consultant, Moritz Hunzinger. This, added to pressure building on him for his private use of bonus airmiles that he had amassed on business trips, caused Özdemir to resign as domestic policy spokesman for the party in 2002. But he has long since been forgiven and is now co-leader of the Green Party at the national level.

Rudolf Scharping of the Social Democrats was fired as defense minister in 2002 following reports that he had received fees from Hunzinger. Scharping had already been embarrassed by a magazine article featuring photos of him and his new girlfriend in a swimming pool in Mallorca.