He's been disparaged in France as "Bishop Bling Bling" and is the subject of mercilous media coverage in Germany this week. Now Franz-Peter Tebartz-van Elst is seeking to send out a different message -- one of modesty. On Sunday, he flew Ryanair to Rome, where he is expected to have a tête-á-tête with Pope Francis later this week during which his future in the Catholic Church could be decided.

Tebartz is under fire for allowing costs of a new bishop's headquarters and residence in Limburg, Germany, to swell to around one third of the bishopric's total estimated wealth. His lavish lifestyle is the antithesis of the message being sent by Pope Francis, who has been seen driving around Vatican City in clunkers in recent weeks. Indeed the contrast could not be greater to German bishops, who are often shuttled around their parishes in luxury sedans.

As Tebartz awaits his audience with the pope, the controversy over the bishop's spending is mounting in Germany. On Monday, Chancellor Angela Merkel addressed the church crisis via her spokesman, Steffen Seibert, who said the German leader was hoping for a "solution for the faithful," noting that "it was clear to everyone that a difficult situation had arisen," one that was a "major burden" for Catholics and the church alike.

The head of Germany's Catholic Church, Archbishop Robert Zollitsch, also flew to Rome over the weekend, saying he wanted to address the situation as quickly as possible -- also at a meeting on Thursday with the pope. Zollitsch further distanced himself from Tebartz-van Elst on Monday, saying, "I am under a lot of pressure because people want clarity," he said. "It is without a doubt a question of credibility and we are considering that," he said.

Originally slated to cost €2.5 million ($3.37 million), the price tag on construction of Tebartz-van Elst's new bishop's headquarters and residence has since ballooned to over €31 million. Numerous sources involved in construction have strongly suggested that Tebartz-van Elst's special requests, including a €15,000 bathtub, contributed significantly to those cost overruns.

Tebartz-van Elst is also in trouble for telling a SPIEGEL reporter in summer 2012 that he had taken a business-class flight to India -- and not a first-class flight as the magazine's reporting indicated -- to meet the poor, a claim he repeated in two public affidavits. Public prosecutors in Hamburg, however, claim the bishop made incorrect statements and have pressed charges against him. If he is found guilty by a Hamburg district court, he would become the first bishop in the history of the church in postwar Germany to be convicted in a criminal court. Tebartz-van Elst had sued SPIEGEL, claiming false reporting.

Although public pressure is mounting for Tebartz-van Elst to step down, Germany's Catholic bishops have remained largely silent on the issue. In the meantime, officials in Limburg and other communities that are part of the bishopric, are reporting significant increases in the number of people leaving the church -- a step that requires registry at local administrative offices.

The affair remained prominent in the German media on Tuesday, with some editorialists writing that it could threaten the current hierarchy of Catholic Church bishops in Germany.

"The bishops are in a dilemma. Of course they'd be happy if Tebartz was out of the picture soon. But if he were to step down, it could be the start of a dangerous development for them -- one that could shake the understanding of church office and weaken the position of Catholic dignitaries in the long run. Catholic bishops are neither managers nor politicians, even if their careers do involve some similar tasks. Their spiritual and worldly responsibilities are derived from God and not from the trust of a supervisory board or the will of voters. … So the church places very high barriers for bishops stepping down early or being removed from office."

"Because of this sacral understanding, bishops have never had to adhere to the laws of a media democracy. No matter how severely they have been criticized, their position has been untouchable."

"If Tebartz-van Elst loses his job because the public pressure becomes too much and not because the church apparatus made the decision, then the church would be bending to public anger. That's why the German bishops are avoiding taking any clear positions. They know this could become a first breach in the dike that would threaten them. Indeed, the case of Limburg will set a precedent. If critics continue for long enough to lash out at church representatives, there's a chance the church will let them fall. This is a message the bishops want to avoid at all costs."

"Just blame the pope. Perhaps the criticism of this bishop wouldn't have been as radical without this pope. Perhaps people would have said, 'This is just the way Catholic Church is, in Germany particularly … Without this new pope, Tebartz-van Elst might have been considered the fitting spiritual specimen of a church that preaches water but drinks wine and that veils its self-love and its egoism with fine talk of the love of God. Without the pope, the criticism of the little parish prince would have died down pretty quickly. … But the criticism isn't fading -- because the pope and the demands he is making of the church are an indictment of the very system Tebartz-van Elst embodies."

"This pope took on the name Francis, whose message is in stark contrast to the pomp of the church hierarchy. Live in poverty for the poor. This is the Franciscan message the pope has heralded. The excesses and untruths of this German bishop now raise doubts about this course. That makes the frivolous antics of this bishop so dangerous for the pope."

"This is not just about the bishop as a person. He is just one eccentric albeit mediocre representative of a system in which money, possessions and wealth have been and still remain important. The bishop is now a risk factor for this system. He draws attention to the peculiarities of an apparatus that not only allowed Tebartz to become bishop, but also gave him the power to do what he likes without any limits or control -- because this is how the Catholic hierarchy is constructed. Other bishops are smart enough to refrain from exercising this power, to act reservedly and listen to advisory boards."

"There was no length to which Tebartz-van Elst and his general vicar didn't go to evade showing the supposed meddlers the exact financing of the €31 million bishop's headquarters. They stripped the cathedral chapter of power, installed a diocesan finance council whose members had to agree to secrecy, and outsourced the bookkeeping to an external auditing firm. But the wall of silence didn't hold. … With an energy that could almost be described as criminal, the bishop and his helpers have ignored every single legal hurdle and appear to have defended themselves against guileless controllers right up to the end. But this could have legal consequences for all involved, because a third of the assets the diocese has built up over almost two centuries has been squandered within just three years." 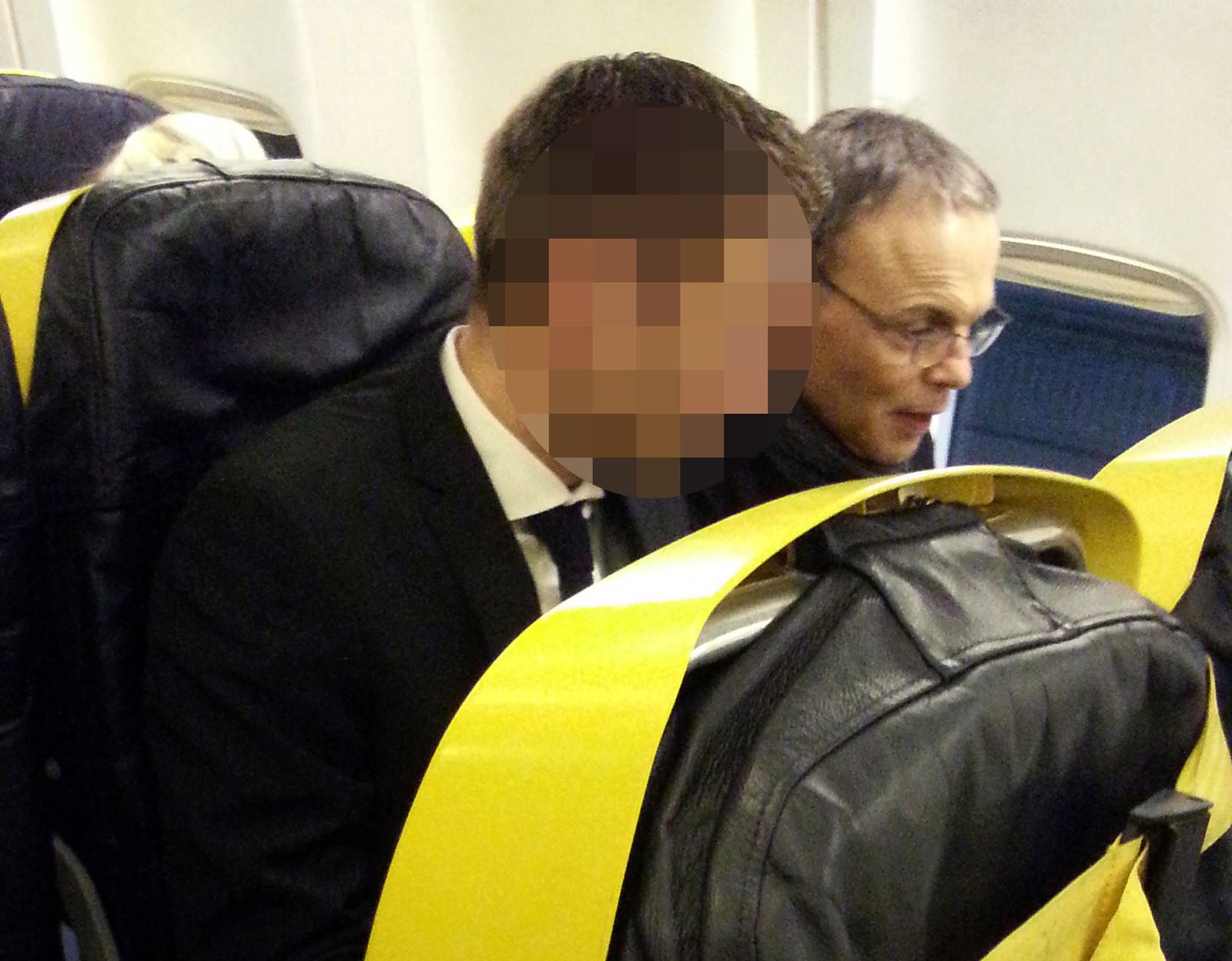 Bishop Franz-Peter Tebartz-van Elst is pictured on a Ryanair flight from Germany to Rome on Sunday.