German Chancellor Angela Merkel won a stunning victory in Sunday's election, leading her conservatives to their best result in two decades following a campaign that focused almost entirely on her rather than on policies.

The election result puts her on a similar footing with Christian Democratic Union (CDU) party heavyweights like Konrad Adenauer and Helmut Kohl, but she won't have much time to savor it. She faces difficult coalition talks with the opposition Social Democrats and possibly with the Greens.

Many German media commentators from across the political spectrum expressed admiration for the unassuming leader who has evidently won the hearts of a majority of Germans with her cool handling of the euro debt crisis.

"It's a phenomenal victory for the woman whom the majority of Germans trust -- and only that seems to have counted at the ballot box. Taxes, justice and the euro weren't the decisive factors. This question was: Who do people trust to rule calmly, sensibly and with strong nerves?"

"Nevertheless, this election day will continue to reverberate for a long time, and Merkel will feel it. Her coalition partner, the Free Democrats, lost two-thirds of their voters and have disappeared from parliament. That's a historic blow -- and massively weakens Germany's right-of-center ground. In addition, the anti-euro party Alternative for Germany has established itself and will change the political landscape. Euro bailouts à la Merkel will become more difficult."

"It's her triumph rather than a triumph of the conservatives. She as a person, she as chancellor achieved it, with popularity ratings that are unprecedented in the history of postwar Germany. With this election she almost stands alongside Konrad Adenauer, who in 1957 won an absolute majority for the first and so far only time in the history of the republic. It was the zenith of Adenauer's power; 2013 is the zenith of Merkel's power. With this election, Merkel's time in office has become an era, regardless of what happens now -- the era of Merkelism, of a power-oriented policy devoid of the visible trappings of power."

"People say she has banished conservatism from the conservatives and has made the party's positions nebulous. But to her many voters, Merkel doesn't lack conviction. They see Merkel as the representative of an elightened liberal conservatism that doesn't shy away from recognizing same-sex marriage. Merkel has mastered many roles. In the euro crisis -- and this was her biggest role so far -- she gave a masterful performance of the thrifty Swabian housewife who keeps the money together. Many Germans like that. And she has turned the exercise of power into an unspectacular affair. That, too, appeals to many Germans. In that way, she has ensured that the modest achievements of her governing coalitions didn't damage her popularity."

"The result is confirmation of her policies as well as of her political style. The conservatives can choose whether to govern in a coalition with the weakened Greens or the SPD. Despite an increase in votes ... (SPD chancellor candidate Peer) Steinbrück can at best lead his party back into the purgatory that he himself doesn't want to suffer again (in the form of another grand coalition government in which the SPD is the junior partner to the conservatives as Germany had from 2005-2009)."

"Angela Merkel won without her party. The Germans like her so much because she's so unassuming, and apparently devoid of narcissism in the way she goes about her work, she doesn't annoy her people or lecture them. 'She'll get the job done,' people think. But will that be enough? Her victory was a victory without clarity or direction -- it was a victory of being as she is. Now Angela Merkel has nothing to lose. She could come out of her shell. She could use what's likely to be her last term to push through reforms not just in Europe but at home. She won't be able to spend another four years feeding off the legacy of (former SPD Chancellor) Gerhard Schröder."

"Whatever alliance Angela Merkel will end up leading, whether it's with the SPD or the Greens, her policies will have to change radically from those of the last four years. The German chancellor has focused on foreign policy since the start of the international financial crisis and the euro crisis. She has been the leading voice in Europe and played a not insignificant role in questions of global finance. But not much happened on the domestic policy front, because nothing goes on without her. Important tasks need to be addressed: reform of old-age nursing insurance, the pension system, education. Things can't stay as they are for another four years. The next government will be judged on whether it manages to find a balance between domestic and international policy. That will be measured in terms of the chancellor's involvement in these issues.

"There's another thing Angela Merkel should be worried about. The conservative success was her success alone, not the party's. She has become irreplaceable for the Christian Democrats. The conservative party is Merkel and Merkel is the conservative party. But as even she isn't immortal, she's going to have to make herself replaceable. Only when she has managed to put her legacy in order will she be a great politician."

"And so, the worst chancellor in the country's postwar history is set to stay in office. Though her conservatives will be forced to enter into a new coalition government -- probably with the Social Democrats -- not much is likely to change as a result. The key questions of our time have been left undiscussed. The fact that Merkel's euro-zone policies benefit only the banks and investors in rich member states, and the fact that people in the troubled economies and taxpayers in the relatively stable economies are the ones to foot the bill, were barely touched upon by the Social Democrats and the Greens during this campaign."

"The fact that Merkel is set to stay in office is bad news for Europe. The possibility that she might govern alongside the Social Democrats in a grand coalition hardly softens the blow. The SPD does have remnants of a Keynesian approach -- they know that debts cannot be reduced through austerity. They are familiar with simple mathematics -- they understand that without a debt haircut, Greece will never get back on its feet. So there is a possibility the SPD will push through the occasional amendment to Merkel's euro-zone policies. But a fundamentally different political approach -- a totally new direction -- is not to be expected." 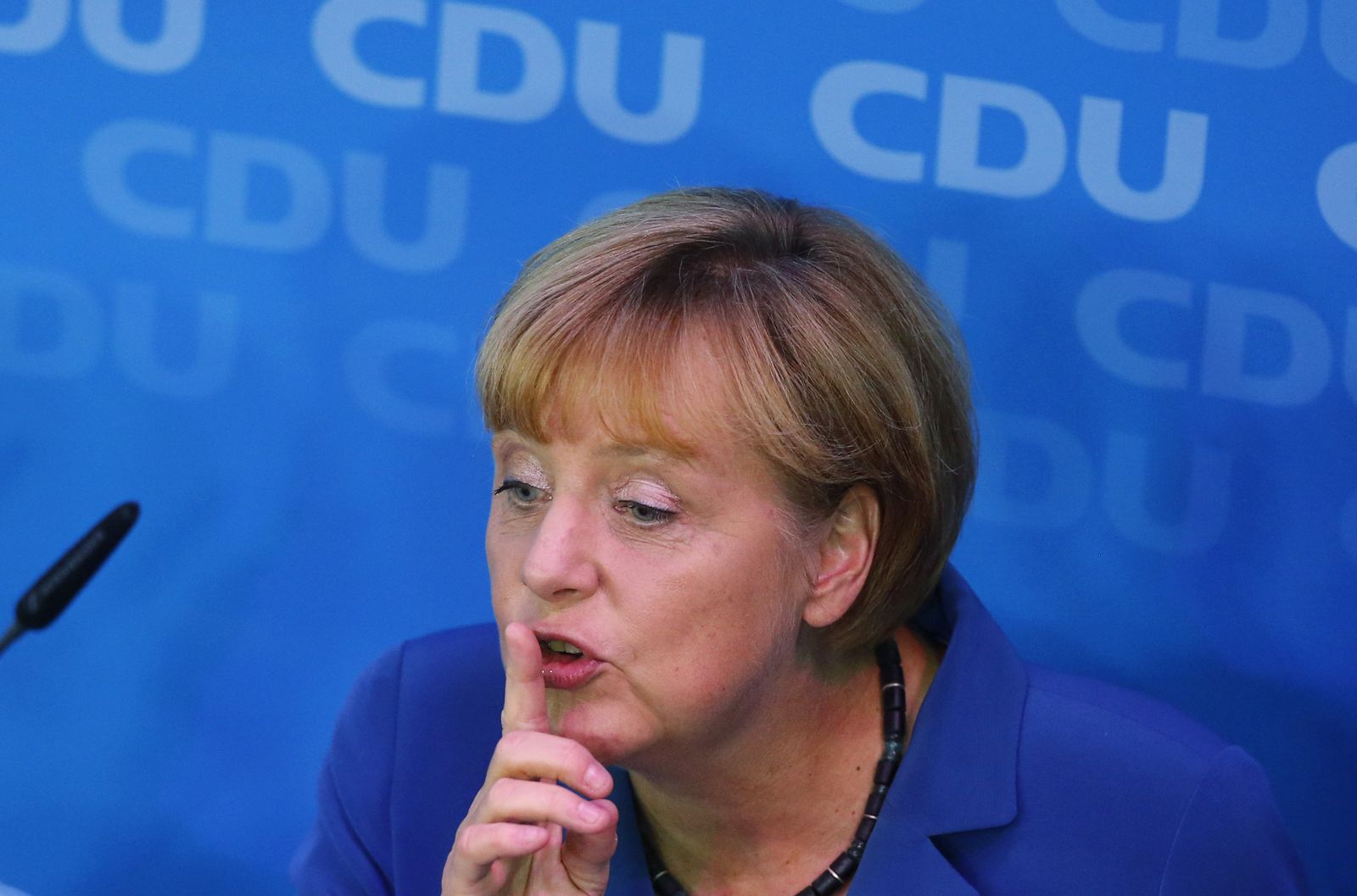 A personal victory for 'Mutti' Merkel.