German media commentators have welcomed the surprise resignation of Heinz Fromm, 63, the president of Germany's domestic intelligence agency, the Office for the Protection of the Constitution, in response to its failings in the fight against right-wing terrorism.

But they say his departure on Monday won't suffice to address the shortcomings of the agency. It was unable to track down a trio of far-right extremists who were at large for over a decade, during which they allegedly murdered 10 people, mainly Turkish immigrants, and injured over 20 in two bomb attacks, as well as robbing over a dozen banks.

A number of parliamentary inquiries have been launched into Germany's security services since November 2011, when authorities discovered by chance that the killings were committed by a terrorist cell calling itself the National Socialist Underground (NSU), based in the eastern city of Zwickau.

Fromm's decision to step down came after it emerged last week that an official in the agency had shredded files on an investigation into neo-Nazis in the eastern state of Thuringia, where the terrorists came from, just a few days after the NSU was uncovered. While there is no evidence that the shredding was part of a cover-up, the incident was a further blow to the agency's reputation.

The German Interior Minister, Hans-Peter Friedrich, said he was "deeply worried" about the loss of public confidence in the agency. No successor to Fromm has been named yet.

Commentators say it is unclear what recommendations the various committees of inquiry at national and regional levels will make on the matter. But they say the government's response to the failings of the security authorities has been insufficient so far. Plans include creating a central register of neo-Nazis, improved cooperation between the police and the intelligence services, and the establishment of a central task force to fight right-wing extremism.

But that and Fromm's resignation won't solve the problems of what commentators call structural weaknesses in an organization that is hampered by its regional fragmentation, complex chains of command and an excessively bureaucratic system. Fromm's departure mustn't lessen the political pressure for radical change, they say.

In addition, editorialists say the agency mirrored a general blindness in society, including the media, towards the threat of far-right violence.

When nine shopkeepers -- eight of Turkish descent, one Greek -- were murdered in cities across Germany between 2000 and 2006, the police dismissed allegations voiced by the families of the victims that there might be a far-right motive behind the killings, and the media made little effort to pursue its own investigations into the murders, all committed with the same gun.

Commentators also point out on Tuesday that Fromm himself had been warning about the growing risk of right-wing terrorism ever since he was appointed in June 2000, and that his various political masters didn't listen.

"It has yet to be ascertained whether the cause of his resignation, the destruction of files about informants in Thuringia where the right-wing extremist terrorist group NSU originated, was due to overzealousness and sloppiness, or if it was a brazen last-minute attempt to wipe out traces of links between the agency and the NSU. Fromm's resignation and his attempts to explain the shredding in November 2011, just when Beate Zschäpe (one of the three NSU members) was arrested, suggest that he too no longer believes in silly coincidences."

"After 9/11, no one would have thought that the domestic intelligence system was incabable of addressing (Islamist terrorism). When the system had to reorient itself at the time, mistakes were also made. But this can't be turned into a systemic question for the agency. Instead, a 'correction of the security architecture' should be undertaken."

"The agency will only lose its purpose … if its work, obstructed by everyday bureaucracy and federalist quirks, runs counter to its mission -- the protection of this democracy and its citizens."

"Fromm has taken responsibility for an unbelievable incident in his agency. A departmental chief had files destroyed on intelligence operations that contained information that may have helped shed light on the surroundings of the so-called Zwickau cell. As has now emerged, this happened just seven days after Uwe Böhnhardt and Uwe Mundlos (two members of the NSU), the alleged perpetrators of an unprecedented series of murders, had committed suicide. Fromm says he knew nothing about it. He was apparently misled by his own staff."

"Anyone who has that happen to them has no choice but to take the consequences and resign. The extent of the scandal isn't discernible yet. Did an agent make a mistake or was the deletion of information a deliberate cover-up? Did the service's agents know about crimes without alerting the police? So far there is not a shred of evidence to support such speculation. But he knows that the matter has diminished confidence in the work of his agency and has damaged its reputation."

"Hence his resignation, which has an air of tragedy. Of all the agency chiefs, Fromm had been the one who had sounded the strongest warnings about the emergence of terrorist structures in the far-right scene. He began doing so shortly after he took office in June 2000. Three months later the neo-Nazis started their murder spree."

"This was an important signal. The extent of sloppiness and dilettantism in Heinz Fromm's agency was simply too great. The president may not be personally to blame for the shredding of important files. But as the chief he carries responsibility if his officials show a complete lack of judgment for correct and circumspect behavior. The file shredding scandal shows once again how difficult its is to run and control the agency. The agency's staff are all too good at concealing, deleting and covering up. It is all the harder to teach them that they can't defend democracy and rule of law if they disregard its principles themselves. There is no evidence whatsoever that the shredding was part of a major conspiracy, a tremendous cover-up that would directly associate the agency with the murders of the Zwickau cell. But by now many citizens regard anything as possible, the agency has simply lost too much trust in recent years."

"It is hard to understand why the agency wastes its time spying on moderate politicians of the Left Party while it was unable to find three neo-Nazis from Thuringia who were hiding in the middle of Germany, murdered 10 people and kept on robbing banks. It is ironic that Heinz Fromm is a man who can't be accused of having been blind to the far-right threat. He often warned against underestimating the neo-Nazis. Politicians didn't always want to hear what he was saying."

"Heinz Fromm's resignation won't have helped the country if it creates the impression that the main culprit of the failure has been found. The ignorance pervaded many agencies and ministries. It also spread to journalists' newsrooms."

"In all the years that the neo-Nazis were murdering their way around the country, the media, including this newspaper, didn't have a proper idea of what and who was behind the killings. … Journalists too didn't listen enough to the Turks who suspected right-wing extremists at an early stage. That was a mistake."

"The resignation won't solve any of the problems. The failure of the agency's staff in the fight against right-wing extremism isn't a personal one in most cases, but a systemic one. To name just a few issues: informants paid by the agency help to fund the neo-Nazi scene. Informants distribute inflammatory racist music and they commit arson attacks and make death threats. They encourage others to commit crimes and their agency handlers warn them of impending police raids. It is almost a logical consequence that files in which such events are documented have now been destroyed."

"For the Interior Ministry and the agency itself, Fromm's resignation is incredibly convenient. Minister Hans-Peter Friedrich can pretend that he has taken tough action. And the agency doesn't have to worry about being revamped for the time being, because the political pressure is likely to decline.

"It would be a mistake to blame Fromm for everything. He was the one who warned then-Interior Minister Wolfgang Schäuble (CDU) in 2006 against merging the departments for right-wing and left-wing extremism. The merger followed the government's political conclusion that right-wing terrorism no longer posed a huge threat and therefore required fewer resources. This blatant mistake was corrected following the discovery of the NSU terror cell."

"It is totally unclear what consequences beyond that should be drawn from the investigation scandal. Countless committees of inquiry were convened and investigators hired, but they all seem to be working alongside each other, rather than together. And Interior Minister Friedrich isn't giving any indication of what changes he wants to make as a result of the scandal.

"He prefers to announce that he's shut down Islamist, far-right or biker groups, which has happened conspicuously frequently in recent weeks. He evidently shows more political zeal in declaring bans than in investigating and fighting right-wing extremism in all its awful aspects."

"The domestic intelligence agents failed miserably in the fight against the National Socialist Underground. Incompetence, sloppiness and dismissal of the right-wing danger made it easy for the Zwickau terror cell to leave a trail of blood across Germany. If incompetent staff destroy files, that doesn't mean the agency's chief failed personally. But agency president Heinz Fromm has accepted political responsibility by resigning. That is to his credit and shows his sense of duty. Fromm's resignation must be the signal for launching a fundamental reform of the service. Our constitution is a treasured asset. It must be protected -- by experts, not bunglers." 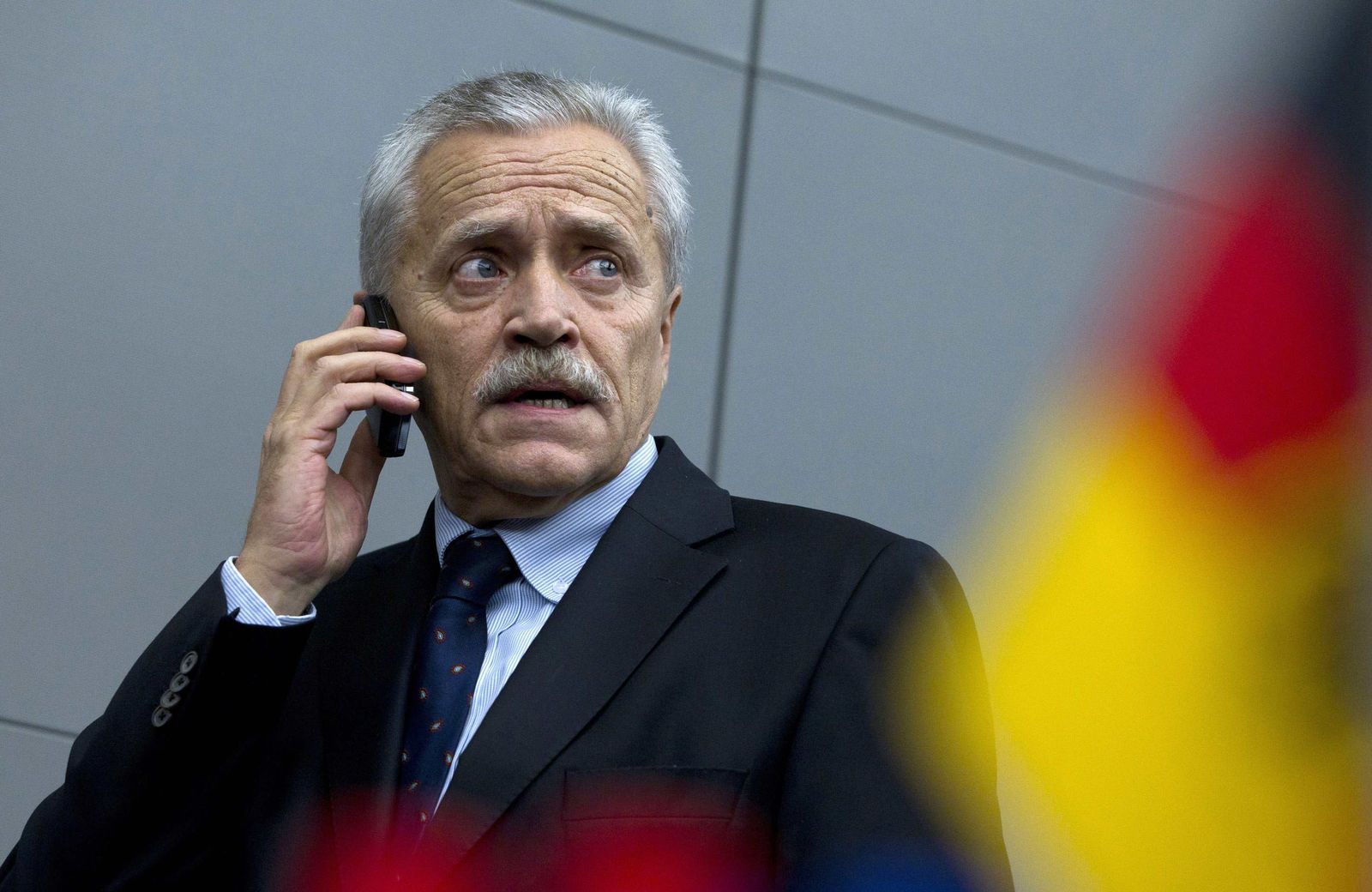