Germany's conservatives and left-leaning Social Democrats reached an agreement this week to create the next federal government after weeks of negotiations following the Sept. 22 election. With Chancellor Angela Merkel of the conservative Christian Democratic Union (CDU) at its helm, the coalition government has agreed to a number of joint policy initiatives that will see the establishment of Germany's first-ever legally mandated minimum wage and generous changes to the country's pension system, including the option of retirement at 63. At the same time, the CDU, its Bavarian sister party, the Christian Social Union (CSU) and the center-left Social Democratic Party (SPD) are pledging to deliver these gifts without raising taxes.

Christoph Schmidt, the head of the German Council of Economic Experts, which advises the German government, said he doesn't believe the government has the funding for all the gifts being given to voters. "It may be possible to finance the planned extra spending until 2017 without raising taxes or fresh borrowing, but it won't be possible after that," he told the newspaper Die Welt.

Schmidt said the plans for allowing retirement at 63 instead of the current 67, along with additional benefits for women who left work to raise children and other pension perks would create lasting additional expenditures. Ultimately, he warned, the money would have to come from either higher individual pension contributions, higher taxes or through a general reduction of pension benefits.

Meanwhile, Clemens Fuest, director of the European Center for Economic Research (ZEW), warned of both the pension changes and the new minimum wage. "The biggest problem is the combination of stricter labor market regulations, the sinking of the retirement age and the introduction of new retirement benefits," he said. "That's going to drive up social security contributions and reduce employment at a time when we actually need more jobs."

German Finance Minister Wolfgang Schäuble of Merkel's CDU has defended the proposals, saying everything has been calculated solidly. He told a German public broadcaster there would be €23.06 billion in additional spending between 2014 and 2017 and there is plenty of room for maneuver in the current budget. He said his ministry is already anticipating budget surpluses of €15 billion a year during that period.

The coalition agreement dominates the coverage of German newspapers, where editorialists at many papers criticize the planned new spending, which they believe sends a bad message in times of European austerity. Others praise the new worker protections planned by the future government.

"The coalition contract reflects the spirit of regulation-loving statism. The very policies set in motion by former Chancellor Gerhard Schröder through his reforms of social and labor laws that created the breathing room needed for the economy to flourish and for unemployment to fall are now being systematically dismantled. In the case of the SPD, this is the result of shame over the success of Schröder's Agenda 2010 (which cut worker protection and benefits for the long-term unemployed and also cost the party votes). In the case of the conservatives, it's attributable to 'Merkelism' -- e.g. a chancellor who has transformed her CDU into the first postmodern political party in Europe, one in which the idea that 'anything goes' is now an actual party value."

"The message this sends to the rest of Europe is disastrous. We preach austerity to the debt crisis countries and yet we continue to fatten Germany's already plump social system instead of putting it on a diet. Germany can no longer be considered a role model for Europe."

"Grand coalitions are by their nature generous. That's one of the reasons they are more popular with people than smaller coalitions. And it doesn't appear that the third grand coalition government in postwar German history will disappoint, either. Because each of the three parties in the new government is showing a big heart for the little man, and each wants to make sure that its handwriting is recognizable on the coalition contract. The result is a cornucopia of good deeds courtesy of the social system that are now to be distributed across the country. Be it a national minimum wage (the first in Germany), pension increases for women who have raised children or dual citizenship for children of immigrants born in the country, there is something in here for everyone. And the parties want the wealthy to be grateful that the government won't be resorting to tax increases to pay for it -- at least not in the beginning. Still, many Germans will eventually learn the hidden costs of this blessing -- namely the next generation. But none of the three party leaders is going to allow that to overshadow this very generous alliance."

"Some are saying that this grand coalition has no vision, but that's not true. The coalition contract isn't just the sum of individual interests that somehow had to be brought in sync. There is a threat that runs through it. The spirit of the contract is the cautious re-establishment of corporatism at the federal level. It is no coincidence that the unions are backing this coalition in a way that they didn't the last time there was a grand coalition in 2005."

"Among the positive aspects are improved conditions for the working poor. Starting in 2017, the country will have a minimum wage of €8.50. Precarious jobs will also be better regulated. Some things are still murky, but the direction is clear: Those with jobs will no longer be able to be exploited the same way they were. It also an open question whether a left-leaning government could have achieved more in terms of labor policy against strong resistance from industry. That's why it is both probable and logical that the SPD party members will vote yes on this coalition agreement."

"When two wish lists are added together to become a coalition agreement, it comes with a high price. What weighs more heavily than the money, however, is that this coalition will not push through forward-looking structural reforms. Nor is it clear how it will effectively address the problem of demographic change. We have the oldest population in Europe. The problems that creates aren't just restricted to areas like long-term care, health care provisions and family policies. It also has consequences for the ability to innovate, training and families. What are we going to do?"

"Merkel has said that this grand coalition will be one to address big challenges, but it is really just a government that unites two large political parties. Neither the SPD nor the conservatives will have to pay the price - instead it will be the country that does so in the long run. We shouldn't expect much from it. … It is the coalition of a country that lives in prosperity. The rich will stay rich, the poor will be a bit better off. But there will be no real redistribution of wealth or structural reforms."

"The coalition package contains enough packing material so that the sensitivities of this and that for the coalition partners can be protected. But that's also the case with most coalition agreements. Still, if you remove the packing material, some remarkable things are left over: Minimum wage, dual citizenship, pension increases, road tolls. There's a lot for the SPD and for the CDU. The surprise factor in all this is low, given that these points have been at the core of talks for weeks now. One still cannot disregard the fact that a minimum wage, dual citizenship and pension promises are systematically important things -- projects with social pacification force." 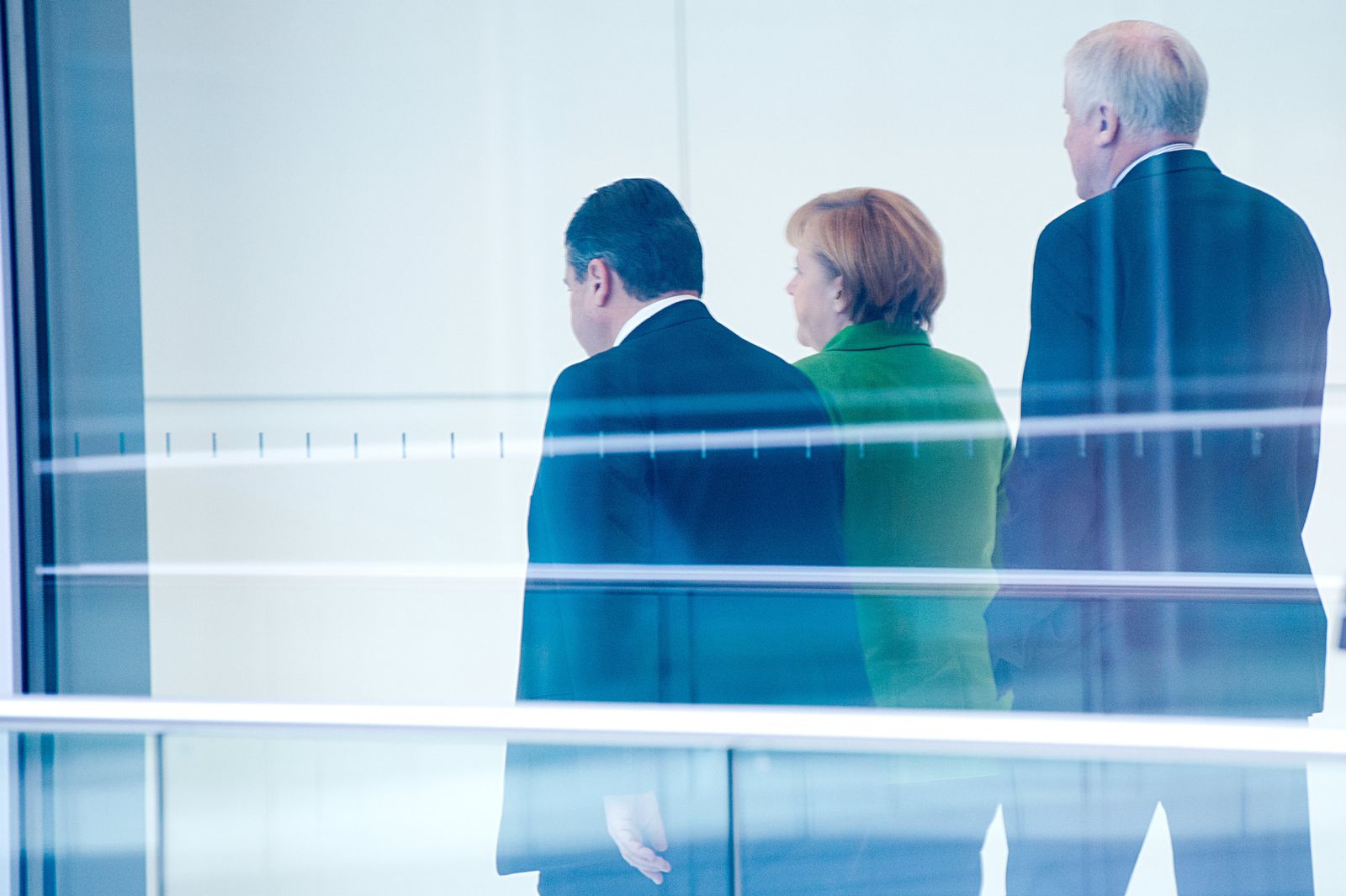 Turning their backs on reforms? Sigmar Gabriel, Angela Merkel and Horst Seehofer are the heads of the parties in the next German government.