What may be perceived by some as old-fashioned German bureaucracy is threatening this week to grow into a full-scale international scandal. On Monday, Munich's Higher Regional Court released a list of media organizations that would be given reserved seats in the upcoming trial of an alleged neo-Nazi believed to have been involved in the murder of 10 people, mostly of Turkish origin. The list doesn't include a single Turkish media outlet. The court is claiming it provided accreditation on a first-come-first-served basis, but international outrage is growing. Turks in Germany and in Turkey are feeling left in the cold over a series of murders of which their community was the primary target.

The trial of Beate Zschäpe, a suspected member of the National Socialist Underground (NSU) neo-Nazi terror cell, is expected to be the biggest in the country since the Red Army Faction trial of the mid-1970s. International attention is expected to be considerable, particularly given the xenophobic nature of the crimes and the involvement of right-wing extremists. This week, Turkish journalists and politicians have been demanding a guaranteed presence at the trial. Many are asking why such a small courtroom has been chosen and why an overflow room with live video isn't being set up for journalists.

The chairman of the German parliament's Legal Committee, Siegfried Kauder of the conservative Christian Democratic Union (CDU), defended the court's procedures in an interview published on Thursday. "A video transmission into another room would come across like a show trial and a public viewing, and it would violate the human dignity of the accused," he told the Kölner Stadt-Anzeiger newspaper. "The judiciary doesn't differentiate between Turkish or non-Turkish. Besides, half the seats have already been reserved for journalists. The court's decision is within the scope of what is permitted and possible."

Compromise in the Works?

But others have called for reserved seats to be opened up for Turkish media. And even the German government has expressed its understanding for the deep Turkish interest in the case. "The hope must be that this media interest is also dealt with sensibly," said government spokesman Steffen Seibert.

On Thursday, there were some signs that a compromise might be in the works. "The Higher Regional Court has promised me it will involve the Turkish media -- whatever that means," Barbara John, the German government's ombudswoman for the NSU victims, told the Passauer Neue Presse newspaper. "I hope the problem can be solved." Turkish journalists have not been excluded from the proceedings, but many consider it an affront that not a single one of the 50 reserved seats for the media has been assigned to a representative of the country.

Many had criticized justice officials for not choosing a larger courtroom for the trial, but judge and chief press spokeswoman Margarete Nötzel had dismissed such concerns, saying the hall chosen had been specially remodelled and modernized for the trial, and that it was the biggest courtroom in Bavaria that conformed to the security measures required for such a trial.

On the editorial pages, German newspapers are highly critical of the court's decision not to provide seats to the Turkish media, with several fearing significant damage to Germany's reputation abroad.

"For the coexistence of people in Germany, for the country's political culture, a series of murders like this (perpetrated out of pure xenophobia) has a different significance than the crimes of some jealous husband or violent pederast. These crimes and the profound cynicism of its perpetrators endanger the foundations of a societal pact which dictates that everyone who lives here has the same right to a safe existence, to be protected by the law and to have their human dignity safeguarded."

"Given that, this court has an even greater responsibility than some jury court doing the routine work of the criminal justice system. One of its primary responsibilities is to ensure that the process of truth-finding takes place with the greatest possible openness and transparency. It is incomprehensible to claim that a larger courtroom couldn't have been found in Munich for the trial … indeed, it's a shamefully inadequate excuse. And the argument about security? Bavarian police have successfully secured events that presented a significantly greater threat."

"It is entirely incomprehensible that it wasn't possible to secure even just one guaranteed seat for the Turkish media in the courtroom. It would have been so simple. Who would have objected if the court had reserved four or five of the seats allotted for the media from the get-go to journalists from the country with whom the majority of the victims were associated? Several media organizations have since offered to give their seats to Turkish colleagues. But the fact that the court has not even been willing to accept this compromise, and is instead hiding behind its apparently incontrovertible accreditation process, is demonstrative of a siege mentality that is unbecoming of this trial."

In a special editorial, Celal Özcan, the Berlin-based editor-in-chief of the European edition of Turkish daily Hürriyet, writes in the leftist Die Tageszeitung:

"My newspaper, Hürriyet, called the court repeatedly before the accreditation period, asking to be informed of dates so that we wouldn't miss them. We registered on the first day of accreditation, and now we are told by the press office of the Munich Higher Regional Court that others were faster? How can that be? It is absolutely unacceptable that the Turkish media has been excluded from the courtroom. Many Turks aren't just disappointed -- they are shocked, both in Turkey and in Germany."

"For Turkish people living in Germany, this trial is eminently important, and they feel like it has touched them personally. They want to know the truth. They want to be informed. And Turks will be looking to this trial."

"In the trial against Anders Breivik in Oslo, the court very meticulously considered who would get a seat in the courtroom and which media representatives would have to follow the procedures on video. In Munich, a reasonable and justifiable solution must also be found."

"Just imagine if eight businessmen of German origin were to be insidiously murdered over 10 years in Turkey. The police, prosecutors, intelligence services -- all failed miserably over a decade in their effort to solve the murders. Suddenly the suspected perpetrator is detained, and Turkish officials are forced to admit massive failures. Then comes the court case. Neither the German ambassador nor the German media are invited by Turkish justice authorities to get an objective image of the trial. No seat is reserved for them."

"It's not difficult to image the kind of outcry this would create -- at the Chancellery, the Foreign Ministry, the Federal Press Conference (an association of journalists who cover the German parliament) and the German journalists' union. A scandal, impudence, making a mockery out of the families of the victims, they would cry. And their outrage would be correct, too."

"It is obvious that nobody in the stubborn Bavarian justice system has recognized or even understood the international dimensions of this trial. The case opens on April 17, and officials will have until then to prevent a global embarrassment." 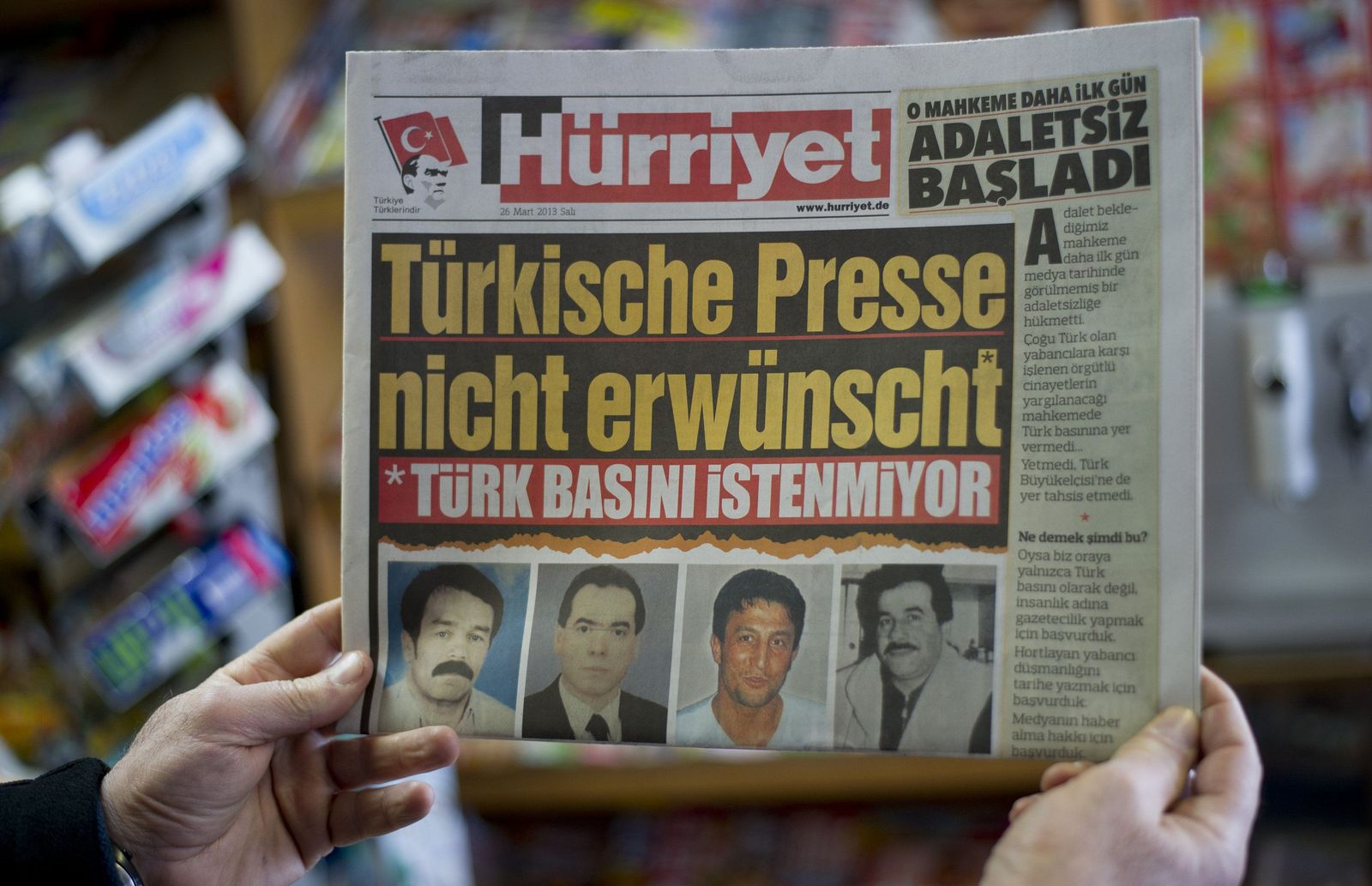