As David Cameron warned Thursday against trying to "shoehorn" countries into a centralized political union, editorialists at a handful of leading German newspapers offered the British prime minister some level of support and urged other European leaders not to give him the cold shoulder.

Cameron's speech on London's future role in the European Union on Wednesday was criticized by German Foreign Minister Guido Westerwelle as an attempt to pick and choose the things Britain wants from the EU. "Cherry picking is not an option," he told reporters.

But Cameron furthered his calls for change at a meeting of the World Economic Forum in Davos, Switzerland, on Thursday. "Countries in Europe have their histories, their traditions, their institutions, want their own sovereignty, their ability to make their own choices, and to try and shoehorn countries into a centralized political union would be a great mistake for Europe, and Britain wouldn't be part of it," Cameron told CEOs and investors in his speech.

In Thursday's papers, some German commentators argue for less emotion and more pragmatism, and suggested that EU partners should take a look at what the prime minister wants.

"Cameron has made his European partners a promise that has a slight whiff of blackmail to it: If the EU isn't reformed and there is no 'deal,' then Britain will be pushed to exit. Cameron doesn't want that, or for euroskeptics or enemies of Europe to clog up his country, and his European partners don't want it. Once the agitation has settled over real or meant British excursions, the country's European partners should quietly sit down and study Cameron's wish list and not just immediately discount it as cherry picking."

"Cameron's strategy may be dangerous, but his analysis isn't wrong. Euro-zone integration is getting ever deeper and that has consequences for EU countries that are not part of the common currency. In general, the competitive capacity across the EU leaves a lot to be desired. And the people are growing more and more distant from 'Europe' and its institutions. None of this can be disputed. A few things need to be settled. Is it imperative that we continue transferring more power to 'Brussels'? In what areas is it essential, indispensable in fact, that we act together? What role should national parliaments play in European policies? What's clear is what the British do and do not want: They want an internal market and cooperation between member states, but they do not want an 'ever-closer union'."

"What's nice and attractive about Europe is its diversity. But not everything can neatly fit inside the box. Nevertheless, the community (of shared destiny) needs EU regulations and institutions that formulate common ground and balance out conflicts of interest. That is laborious and not always satisfying, but a firm framework is essential. At the same time, this framework needs to reflect diverse traditions, mentalities and goals. In other words: It can't work without flexibility. Europe's trick is to find a way of combining that flexibility with commitment. Pragmatic British and other skeptics should be able to warm others to that idea."

"Cameron is in no way alone in his analysis of the changes that are coming for the EU, which one cannot address as being 'business as usual.' The overdue plans to stabilize the euro zone bring with them a deepening of the EU that also will have wide-reaching consequences for the countries not belonging to the euro. Those need to be not just discussed, but also most likely negotiated. It is not anti-European when the British prime minister brings these up. It is also not anti-European of Cameron to point out the threatened competitiveness of the EU and to blame, among other things, the 'sclerotic' state of management in Brussels -- the overboard rules and regulations that hinder many creative forces, not just in commerce."

"And it is not at all anti-European of him to note the insidious democratic deficit and the lack of trust in the citizens in the EU and its institutions. That has undermined a lot of what European integration was actually meant to achieve."

"Great Britain is approaching the EU question in a 'practical' not emotional way, Cameron says. That would do us all some good."

"David Cameron has spoken, but Europe isn't trembling. Why not? For the British prime minister, it was mostly about quieting the euroskeptics in his own party. And a lot of water will flow through the Thames before a referendum in four to five years. Who knows who will be in 10 Downing Street then. And even if the British go to the polls in 2017, it is not a foregone conclusion that they will vote 'no.' When the going gets tough, they have always been a reasonable people."

"The statement currently heard in Brussels that Britain needs Europe more than Europe needs Britain is foolish and dangerous. Because without the United Kingdom, Europe would have less esteem in the world, not more. It is in the interest of the Germans and the French, especially, to not just pull the British along, but to instead bring them to the center of the debate over Europe. Because the reality in Europe is such that the opinions over what is the right path to take are divergent across the EU."

"Cameron expects a lot from the EU, but he also acknowledged being a European. It would be wrong to give him the cold shoulder."

"It was above all a speech aimed at domestic politics. The anxiety it has caused in other EU countries has therefore been exaggerated. Cameron avoided naming the concrete demands, other than abandoning the EU's working time directive, against which the success of his new negotiations would have to be measured. And although it was rumored before his speech that he would insist on a new EU treaty, instead he plans to push through his goals in negotiations with other member countries if necessary."

"That gives him a lot of room for maneuver. It doesn't prevent the possibility that some powers will be returned from Brussels to London, an eventuality that also wouldn't cause the EU to break up. It strengthens the chance for Cameron to sell his strategy as a success, and for him to strongly support a 'yes' on the referendum, assuming he is still in office when it happens."

Offering a populist take on the UK developments, the tabloid Bild offers eight reasons why the EU doesn't need the British: 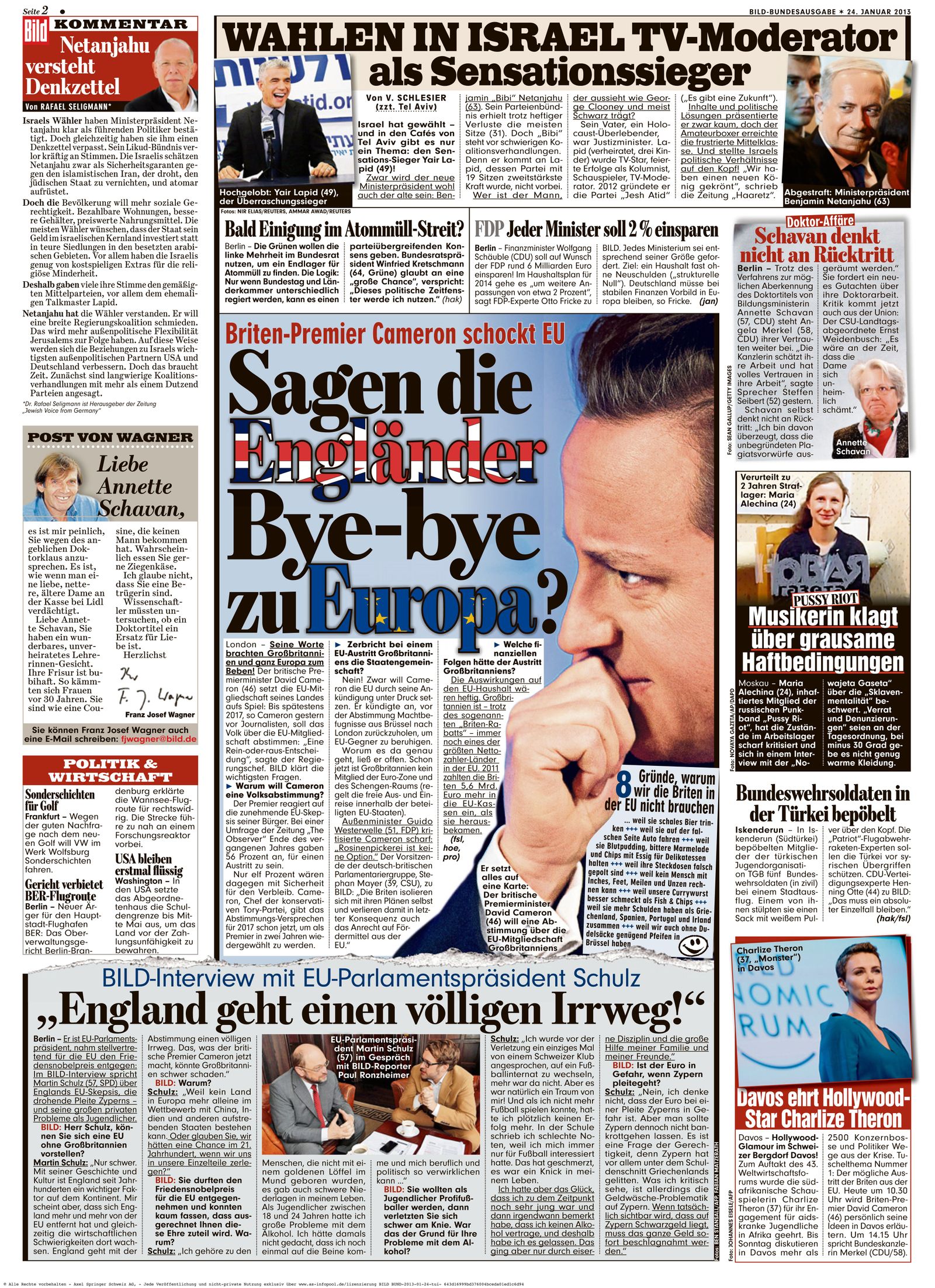 A headline in the tabloid Bild asks if the English are saying "bye-bye to Europe?"