A day has passed since Germany's highest court gave its blessing to the treaty that will cement the euro's long-term bailout fund, but the debate over the rescue program continues. Opponents of the European Stability Mechanism (ESM) had warned that it would strip Germany's parliament of its right to determine the national budget. In a preliminary ruling, the court said Germany could move ahead and ratify the treaty so the ESM can start doing its work.

However, in what the German media has dubbed a "yes, but" ruling, the court also set conditions, demanding, for example, a legally binding statement from the government in Berlin that Germany's total potential liability with the ESM would not exceed €190 billion ($245 billion) unless that change were approved by the German representative on the ESM board.

The ruling also left a number of points open, including what the ESM's future relationship will be to the European Central Bank. Just days before the ruling, ECB President Mario Draghi announced the central bank is prepared to pull out its bazooka and buy up unlimited quantities of government bonds from beleaguered euro-zone countries in order to shore up the common currency. But Draghi also said that the ECB would only initiate a bond-buying program for countries if they first applied for aid through the ESM and submitted to strict reform and austerity measures.

Although a full ruling that takes into account the ECB's decision is not expected until the fall, the court did lay out one clear limitation for interactions between the two institutions. It warned that the ESM could not be bestowed with a banking license in order to borrow money from the ECB. Under current European law, it is only able to raise money from the markets. The court warned that the ESM cannot become "the vehicle of unconstitutional state financing" by the ECB.

Two common threads seem to connect editorials at many newspapers across the political spectrum in Germany on Thursday. One is that the Constitutional Court appears to be ceding its role in policing issues pertaining to the European Union to the EU itself. A second is that Wednesday's ruling won't go far enough in correcting the democratic deficiencies in Europe that have grown as a result of the euro crisis.

"The 'yes, but' decision by the Constitutional Court is a victory for the chancellor. But will she be happy with it? … The euro crisis was triggered by the debtor states because they lived beyond their means for years. Saving the euro by solving these problems is something those countries can only do themselves, but it is painful. That's why this is dangerous: The ESM and ECB, working together, may be abused in order for governments to avoid painful reforms -- and the Germans will be stuck with the liability. The Constitutional Court justices have paved the way for that by ruling that the ESM doesn't violate the German constitution. Now it is up to the German government to determine whether or not the euro bailout spins completely out of control."

"The justices have completely ignored the problems with the ECB. Instead, they first want to review them during the full court proceedings this fall. Until then, the ECB can do what it wants. And that may be a good thing, too, because, in the end, the Constitutional Court doesn't really know what it wants. When it comes to EU affairs, the court is a pilgrim that doesn't have any destination."

"The court has earned its high respect, but not with its decisions on European integration. Many of these decisions were pointless -- the court acted as if the European Union could be shaped according to the desires of the Karlsruhe-based court. Now the court has recognized that it has been overtaken by Europe. When it comes to leading, or at least chaperoning, the European integration process, the court promised too much and delivered too little. One shouldn't poke fun at the efforts of the court to infuse Europe with its spirit … because that would have been great if it actually worked. But these efforts, which began with the court's ruling on the Maastricht Treaty in 1993 and have now ended, delivered little. They have only served to upset other EU member states and to instil Germans with overly high expectations."

"When the court has to rule on the ECB, it will just hand the case over to the European Court of Justice in Luxembourg. It will be the first time in the history of the Karslruhe court it has done that, and it will be a decisive moment for Europe."

"The Constitutional Court has been a constant flashpoint in efforts to rescue the euro. Barely has it accepted the ESM, with a few conditions, and already a dispute is breaking out among politicians over the ECB's policies. This isn't how you calm the markets. Indeed, things still haven't quieted down because the court now plans to review the ECB's policy, announced last week, of buying up unlimited bonds from financially weak member states. The conflict, it seems, is far from being resolved."

"Ultimately, the question will be about whether the bank can help financially battered member states combat higher interest rates -- or if its sole responsibility is guaranteeing the stability of the euro. Almost every member state backs a broadly interpreted mandate. Only the Bundesbank, Germany's central bank, and now the Constitutional Court, are fighting for the purist variation -- even though there is no danger of inflation to be seen. That's why they won't be able to impose the German position in the end. It only creates more uncertainty and intensifies the crisis. Nevertheless, Karlruhe plans to clarify the issue this autumn, in a bid to limit further turbulence."

"In the ruling rejecting the temporary injunction against the ESM treaty and fiscal pact, the court remains true to its previous euro-bailout decisions. It stresses the Bundestag's responsibility for budgetary matters, including on financially relevant decisions that are made in euro-zone bodies. That's not new, but in order to reinforce the requirement, the justices in Karlsruhe are demanding a written clarification in which their interpretation is codified -- in the form of an additional protocol, for example. In other words, decisions made in the ESM's boards will be subject to the approval of the German parliament. That word still needs to spread to the other euro-zone states, who have already ratified the treaty without reservations."

"The strengthening of parliament's rights has the effect domestically of limiting the government. Externally, however, it will improve Germany's position in European negotiations. Ms. Merkel is not an omnipotent chancellor as she is often seen to be by our partner countries. Even when it comes to individual decisions she needs to make sure she has the support of parliament. Majority support in parliament, where many politicians are unconvinced by the chancellor's policies, is something Merkel has to constantly lobby to get."

"And members of parliament also have to defend their decisions to voters, which is not exactly easy in light of the negative public mood and which will get even harder next year ahead of the national election. It is now time to hold the kind of public debate about Europe that should be self-evident in any vibrant democracy -- even if no referendum is planned."

"The future of Europe cannot be decided in legal terms -- it must be determined politically. Anyone who thought that Europe's salvation could be found using legal means was shown better after Wednesday's ruling … which this time slightly buttressed the rights of parliament. But it failed to deliver what one of the plaintiffs with the Left Party claimed it to be -- namely an 'historic verdict'. It isn't. It is too uninspired to be that -- at best, it is inspired by the idea of not disruptively standing in the way of the euro rescue. One can criticize it or, like most parties in parliament, one can welcome the fact that the court has remained true to its previous course. When it comes to European integration, the court insists on its role as a powerful actor, but when push comes to shove, it quietly leaves the stage."

"The conditions the justices have set for the ESM's ratification … including its demand for a clarification from the government that is binding under international law … are lenient. Yet again the justices have bolstered the position of parliament. When the court ruled on the EFSF bailout fund in 2011, it denounced the fact that parliament's rights had been violated, but this time it didn't have to. That is affirmation that the ESM treaty has been drafted professionally and in a democratically clean way. Indeed, the ruling from Karlsruhe is indirect praise for Merkel's government and the Bundestag."

"The Karlsruhe decision opens the door for the ESM law to be signed by President Joachim Gauck. But it also opens the door to new lawsuits and citizens' initiatives. The court is looking into the question of German money and democratic legitimation. Given time pressures, the ECB decision may have been inevitable, but it is also undeniable that it has created the possibility of a bottomless transfer union. And it is also clear that democratic and constitutional legitimation is suffering as a result of a further deepening of European integration. That must, and will, lead to new lawsuits."

"Efforts to save the currency union, and no one can overlook this, have become a race against time. The ECB wields the baton, not Karlsruhe, Berlin, Paris or Rome. In his ruling, Vosskuhle said that Europe would only have a future as a legitimate community based on the rule of law. That's something that both Old and New Europeans would like to see. But it is far from clear whether the EU will be in a position to catch up with what it is doing in terms of democracy and constitutionality." 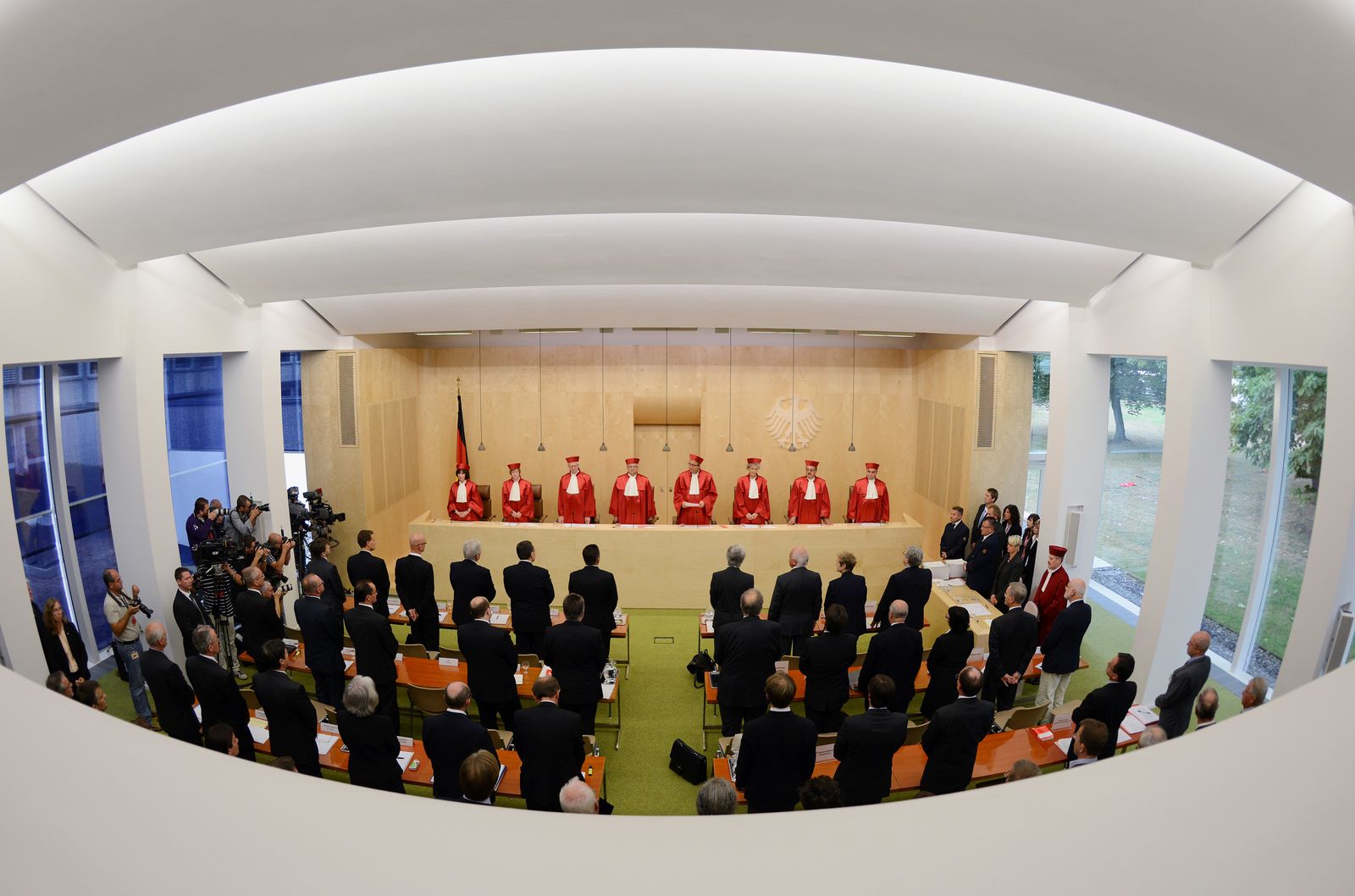 The justices of the Constitutional Court in Karsruhe delivered their preliminary verdict on the permanent euro rescue fund on Wednesday.