Offering a brief boost to opponents of the long-term euro bailout program and the planned European Union fiscal pact, Germany's Federal Constitutional Court on Thursday asked the country's president to hold off on signing the legislation into law if the two bills are approved as expected by the country's legislative chambers next week.

President Joachim Gauck's decision to respect the court's request means that Germany will not be able to ratify the European Stability Mechanism by July 1, which Chancellor Angela Merkel had hoped would send a strong message to the markets. Some opposition politicians are even calling the development a "slap" in the chancellor's face.

Germany's Left Party and former Justice Minister Herta Däubler-Gmelin of the opposition center-left Social Democratic Party (SPD) have both announced their intentions to challenge the ratification of the treaties after they are approved by the federal parliament, the Bundestag, and the Bundesrat, the legislative chamber that represents the German states, in votes planned for next week.

Sahra Wagenknecht, an influential member of the Left Party who also serves as the deputy head of its parliamentary group, argued that a deal reached between Merkel's conservative government, the Green Party and the SPD on Thursday to ratify the ESM and fiscal pact treaties was "worthless." Wagenknecht and other detractors claim Merkel has tried to push the legislation through parliament too quickly without giving the legislature adequate time to debate the measures. They also claim that the fiscal pact could potentially limit the German parliament's sovereignty in determining budget policy. Wagenknecht described the legislation as no less than a "putsch" against Germany's constitution.

In recent months, the German Constitutional Court has issued a number of rulings in which it has ordered parliament to be provided a greater say in the government's euro bailout decisions. Most recently, on Tuesday, the court ruled that Merkel's government must move faster and more comprehensively in notifying parliament about important decisions pertaining to the euro rescue. Wagenknecht believes the Karlsruhe-based organ may slap the Merkel administration with a similar reprimand over the ESM and fiscal pact. Claiming that the "spirit of the constitution is being changed," the Left Party member wants a national referendum to be held on the treaty.

Under a compromise reached between Merkel's conservative government, led by her Christian Democratic Union (CDU), and the opposition on Thursday, the ESM and fiscal pact are expected to be approved by parliament on June 29. The opposition Greens and SPD succeeded with their demand that Germany push for a financial transaction tax that would force markets to share the costs of financial crises. The government will also honor their demand that the fiscal pact be complemented with provisions promoting economic growth.

'Far Too Much Time'

Despite their support for the bills, prominent Greens also criticized Merkel, with Volker Beck, a senior member of the party's parliamentary group, accusing the German leader of waiting too long before opening negotiations in parliament and for delaying the discussion because of key regional elections.

In the SPD camp, deputy parliamentary group head Hubertus Heil said the government itself was to blame for the delays. "It let far too much time pass before it began negotiating with the opposition," he said. He called on the government to move quickly to clarify any constitutional concerns surrounding the legislation.

Meanwhile, SPD floor leader Frank-Walter Steinmeier said he didn't anticipate that the ESM or fiscal pact could be ratified by July 1. He anticipated a two-to-three week delay in order to provide the court with enough time to review the constitutionality of the legislation.

The court's move did draw criticism from at least one member of Merkel's cabinet. Finance Minister Wolfgang Schäuble of Merkel's conservatives complained that the Karlsruhe court had broken protocol by pleading directly with the president. "I don't think it is smart for constitutional organs to communicate with each other publicly. And it is even less prudent for the federal government to comment on it," he said. The conservatives' floor leader Volker Kauder also called on Gauck to ignore the request from Karlsruhe, arguing there was no reason to delay ratification.

On the editorial pages on Friday, many German newspapers come down critically in their opinions of Merkel's handling of the ESM and fiscal pact, arguing that the decisions entail shifting sovereignty on parts of budget-making policy to Brussels and that a more detailed debate should be conducted.

"What actually needs to happen in order to wake up both the German government and the pro-Europe parties in parliament? For the second time in one week, the Constitutional Court has applied the brakes on the government for the overly hasty implementation of euro bailout measures. This time it is 'requesting' that the president wait before signing the treaty on the ESM. It's a preemptive request, because it is assumed that the Left Party and some members of parliament will challenge the decision in parliament and that the court will need two to three weeks to review the suit. With the request, the court is able to avoid having to issue a temporary injunction against the treaty, which could lead to a complete escalation of the situation."

"The situation that has now been created must also compel supporters of Germany's European Union strategy -- and since the deal reached on Thursday over the fiscal pact and ESM, these also include the CDU/CSU, SPD, FDP and Greens -- to think things over. There are good reasons for ratifying the ESM treaty. But this set of agreements, as well as the vote on the fiscal pact, is not some mere amendment to, say, environmental law. It is about deep encroachments into the national constitution, the transfer of sovereignty to the EU and preparations for new institutions like the ESM that, so far, have only been granted limited democratic legitimacy. It's also about possibly paving the way for actions that would affect Germans' property."

"The timeframe for deciding on this law is an undermining of the court's ruling on Tuesday and it mocks the notion of parliamentary democracy. But out of her desire to position herself as the queen of the euro rescue, the chancellor has degraded the parliamentary vote to the level of a farce. (...) Merkel takes a long time to act, but then she acts with brute force and at the last second. That is not parliamentarianism but a regrettably short-sighted and amateurish style of governing."

"The new treaties involve enormous sums of money and contain legal constructs that the law has never known before. It will create an ESM company that is above the law. The company will be able to sue but cannot be sued in return. It will be able to do and be what it wants. Is such a euro absolutism necessary to save the euro? How can one control it democratically? (...) One should be able to talk, discuss and deliberate about this. How should people's trust in Europe grow when the government doesn't trust the representatives of the people?"

"The ESM and the fiscal pact impinge on the core of the Bundestag's budgetary autonomy. The constitutional court judges will probably rule that the constitution's possibilities have been exhausted. They will then only accept the new treaties, when, within a reasonable amount of time, the people are also allowed to decide."

"(The debate between the parties) … is obscuring that fact that nothing less is being negotiated than a reorganization of Germany's fiscal constitution. (...) The power struggle between the federal government and the states over the burdens of the fiscal pact leads the issue right back to where it belongs -- namely out of the party political arena and into the constitutional arena."

"It won't be the first time that the Constitutional Court rather than the Bundestag has the final word on such an issue, either. As caustic as the Karlsruhe court sounded on Thursday, it absolutely wants to have this last word. And although it might not be timely, it will be legally binding."

"The ESM euro rescue fund and the fiscal pact were supposed to be forced through the Bundestag and Bundesrat at top speed. Merkel's government hoped that it would be signed into law by the president the same night. But that is not going to happen. And justifiably so."

"This is because the euro bailout cannot operate according to the motto that necessity knows no law. The president and the constitutional court have to thoroughly examine these laws. And that requires time. Especially when it's a question of our money." 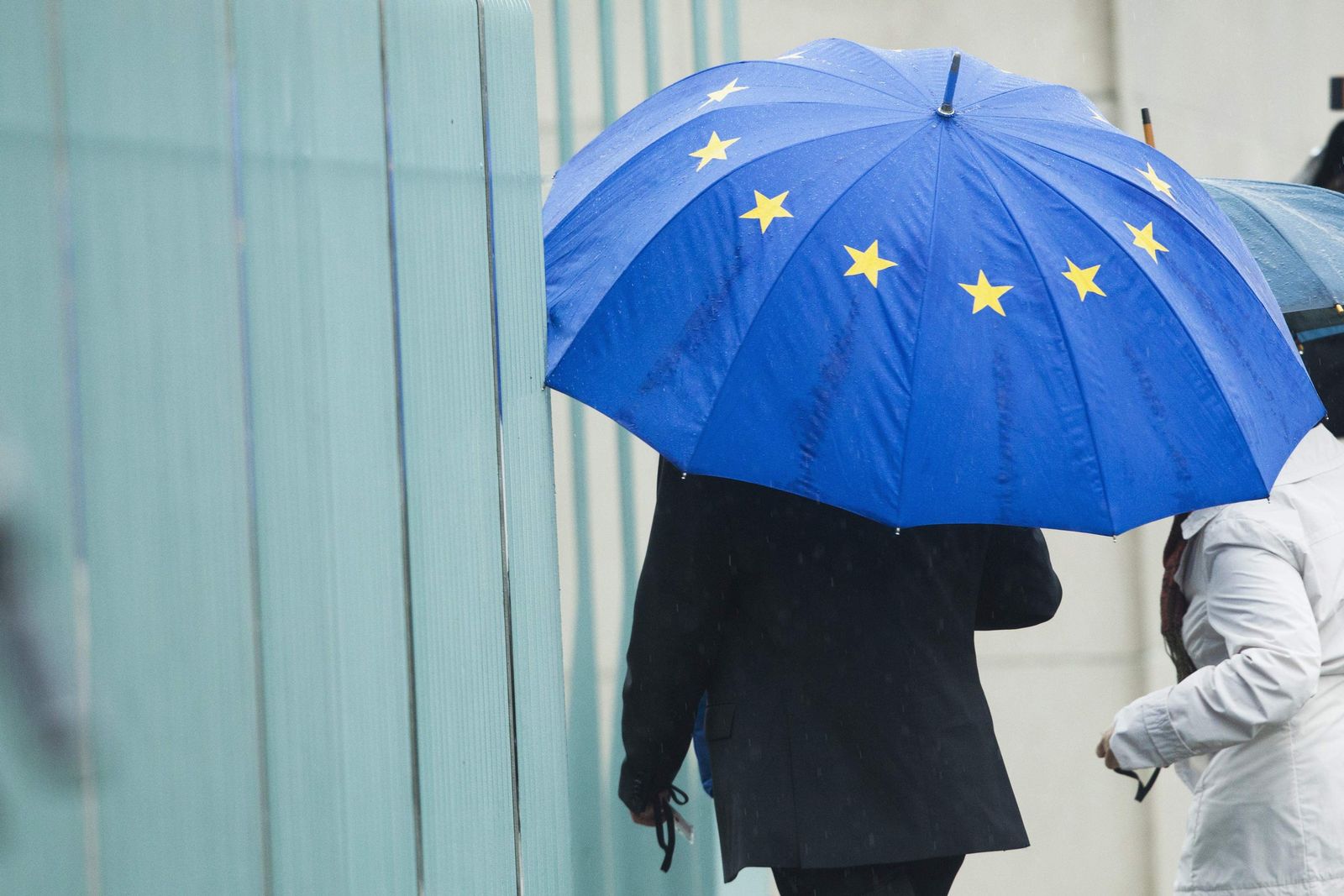 A rainy day for the euro in Berlin: Germany's Federal Constitutional Court has requested the country delay ratification of the permanent euro rescue fund.