The opening of Berlin's new airport, BER, was postponed for the fourth time on Monday, and the city's mayor, Klaus Wowereit, said he would step down from his position as supervisory board chairman of the project. German media commentators on Tuesday said the repeated delays have made the German capital a laughing stock around the world for its inability to complete the prestige project. As before, the latest delay resulted from continued problems with the airport's fire safety system.

In a radio interview on Tuesday, the technical director for the airport project, Horst Amann, said the difficulties were "terrible" and that it was time to "put all the facts on the table -- and be brutally honest."

"According to what we know now and what we have very painstakingly uncovered in recent months, the problems are unfortunately very, very serious," Amann, appointed last August to sort out the manifold problems, told Hessische Rundfunk radio. He said it had been the right decision to delay again but he didn't provide a concrete date for a new opening, saying only that 2014 was a "good number."

The developments have led many to question whether Wowereit, who has ultimate political oversight for the project, should remain the city's mayor. In its own analysis, SPIEGEL ONLINE writes that Wowereit's management has been "particularly disastrous. On any other planet, he would have been forced out long ago, but apparently not here in Berlin."

So far, Wowereit has only offered to step down as supervisory board chairman. On Monday, he said he would hand over the reins to Brandenburg Governor Matthias Platzeck, also of the center-left Social Democratic Party.

With pressure on the mayor mounting, Wowereit has also denied reports that he knew early on about the need for an additional delay. He said he was first informed on Jan. 4 that the current deadline could no longer be met.

Of course, Wowereit is far from alone in carrying responsibility for the delays in the airport's opening. The state of Brandenburg and the German federal government are also stakeholders and are represented on the supervisory board. Many are also criticizing Rainer Schwarz, the manager of the company that operates Berlin's Tegel and Schönefeld airports as well as BER. Many have accused Schwarz of pretending that there were no problems during construction, even as the situation grew worse. Wowereit has suggested that the airport boss should be replaced, but has said he will not submit the request himself.

Nevertheless, the stakes are increasing for Wowereit. The opposition Greens in Berlin are calling for the mayor's resignation, as is the influential mass-circulation newspaper Bild. Criticism from the business community is also growing louder, with airlines and businesses linked to the airport losing millions in revenues because of the repeated delays.

It is hard to say whether he can weather the political storm. Some within his party would like to see him step down. They shake their heads over the fact that he hasn't yet taken steps to replace airport boss Schwarz and to install a finance chief to bring the staggering cost overruns for the airport under control. The delays have led the cost of the project to more than double to some €4.3 billion ($5.7 billion) from an initial estimate of €2 billion, and the new delay will likely add hundreds of millions to the final bill.

Ultimately, Wowereit's Social Democrats may have no choice but to keep him at the helm in Berlin. The SPD lacks prominent and powerful potential successors for the mayor in the capital city.

Wowereit's political future is the subject of editorials in Germany's most important national newspapers on Tuesday.

"It must slowly be dawning on Klaus Wowereit that he hasn't built an airport, but has instead dug his own political grave. The Berlin mayor has managed to turn the BER airport prestige project into a disgrace -- both domestically and internationally."

"Wowereit still refuses to take political responsibility for this by stepping down as the city's leader, as would befit such extensive misconduct. The SPD still supports him because if it didn't, it could face a new state election in a worst case scenario -- and its prospects wouldn't be good. The same applies to the conservative Christian Democratic Union, which after all those years in opposition is enjoying its coalition spot in the city government with the SPD."

"Is a new beginning even possible given this debacle? This isn't just about the opening date, but also the apparent faulty construction of the airport itself. This mess is like a Gordian knot. Even if Wowereit and Platzeck both step down, who will cut it?"

"The fact that Wowereit is now giving up his spot as supervisory board chairman to his colleague Platzeck is a joke, a distraction, a sham. Wowereit is trying to save his own neck, and is doing so by ever-shabbier means."

"Political responsibility means accepting the consequences of mistakes that happen within your area of authority. It doesn't mean accepting consequences only when one has personally brought guilt upon him or herself. That means sometimes it is also right when politicians take responsibility for things they didn't even know were happening."

"So what makes some politicians think they are above these rules? One reason is vanity and a craving for recognition. ... The other is political opportunism. In the case of Wowereit and Platzeck, it's likely a disquieting mixture of both."

"But should this interest voters? ... No. This is about truthfulness, credibility and political hygiene in this country. Wowereit and Platzeck are responsible for the planned construction of the capital's airport. They failed. Now other politicians in Berlin and Brandenburg must do better."

"In reality, this isn't even a proper resignation. Wowereit has simply exchanged the boss' seat with his deputy, Brandenburg colleague Platzeck, the other pilot on this doomed flight. It's a cheap trick! A farce! A complete piss-take.

"Wowereit has not uttered a single word of regret at the fact that even more of our tax money will be buried in this multibillion-euro graveyard. That Germany's engineering prowess has been dragged thrugh the mud through bad planning. That, by now, the capital city has become the laughing stock of the world. Herr Wowereit, you bear political responsibility for all of this! You should resign as mayor!"

"Wowereit's resignation as supervisory board chairman is an admission of guilt that he did not pay sufficient attention to Berlin's prestige project. He, and with him the entire supervisory board, dropped the ball -- and they did so on a project that is so important to the capital. Wowereit should assume the full responsibility for his inaction and resign as mayor."

"What's necessary is a comprehensive reorganization, not just of the supervisory board, but also of management. The fact that after the postponement of the planned opening date last June only the technical manager Manfred Körtgen was removed while executive Schwarz was kept on was one of the central mistakes that hindered a new beginning for construction."

"Since the cancellation of the June date, construction has more or less come to a standstill. Two new opening dates have already been shifted. Horst Amman, the new technical manager appointed over the summer, likewise hasn't been able to solve the problems. Hundreds of plans have been reviewed as well as ways of harmonizing them. But it has been chaos at every turn."

"What, in particular, does Wowereit actually have to do with the fact that the opening date for BER has been delayed for a fourth time? Wowereit is not an architect, he's not a carpenter and neither is he an engineer. He didn't even help with construction -- it was others who created the mess. He may sometimes seethe with rage, but he still doesn't understand the first thing about smoke-removal systems. Strictly speaking, Wowereit, as supervisory board leader for the airport management company, can't help it that BER isn't being completed. So what's the big deal?"

"Even if Wowereit weren't guilty of anything, he still carries responsibility for the entire project. He's not alone with that responsibility, but he does carry the largest share of it, followed by Brandenburg Governor Platzeck and Federal Transportation Minister Peter Ramsauer. The airport was and remains a political project because the government is the client. Berlin's mayor played the greatest role in pushing the project forward. Even if the airport opens at some point, it will still be regarded as a political failure. The rising costs alone are an indicator that they are not getting the airport they mandated their politicians to build."

"Now Wowereit is handing over his position as chairman to Platzeck. By doing so, he is not accepting responsibility -- he is merely taking himself out of the firing line. But this Berlin-Brandenburg job swap is so implausible that it should expedite Wowereit's fall from office -- as well as that of Platzeck." 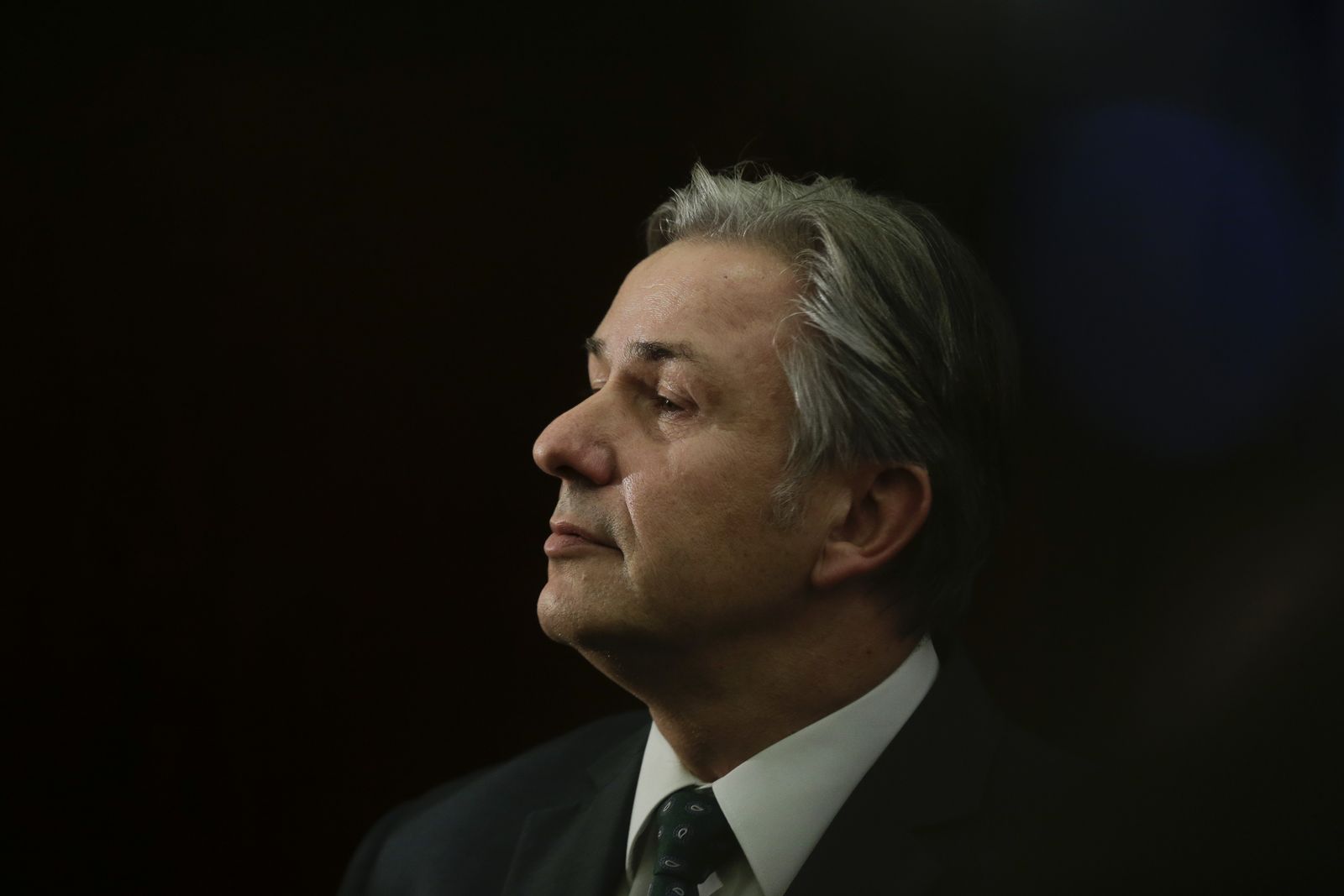 Under fire: Berlin Mayor Klaus Wowereit speaks to the media on Monday.