At first glance the two story office building tucked away in the town of Nordhausen seems unremarkable. The boxy building north of Erfurt, the capital of the eastern German state of Thuringia, is painted yellow and comes with a parking lot. Though part of the first floor already has a reliable renter, another part suffered fire damage earlier this year. Still, it's in a desirable location.

In a catalog for an auction early this month in central Berlin, the property was listed for €48,000 ($60,355). But by the end of an intense 15-minute bidding war between two remote buyers and a gentleman in the back of the airy atrium, it went for almost double the asking price: €90,000 ($113,166). The top bidder turned out to be an investor from western Germany.

"It is an example of what real estate can fetch when it's good," says Carsten Wohlers of Plettner & Brecht, the property brokerage that ran the auction. About 90 percent of the 53 properties listed were sold, a 10 percent improvement over last year, he says. Organizers also noticed that more buyers called in bids rather than coming in person, though Wohlers attributes that as much to the good weather as the ongoing European Football Championship.

The auction is just one example of how, even as housing market recovery in the United States, Spain and other struggling countries muddles along, Germany's real estate market has taken off. After years of stagnating, German prices for both residential and commercial real estate began rising again in 2009. Buoyed by trouble in other euro crisis countries, German property has become a safe haven for both German and international investors looking for a secure place to store their money.

Indeed, German real estate prices rose 3.5 percent between September 2010 and the same month the following year, according to the Organization for Economic Cooperation and Development (OECD). Meanwhile, the average price for homes rose 5.5 percent in 2011, according to the Bundesbank, Germany's central bank. And major German cities such as Berlin, Hamburg and Munich have seen between 10 and 13 percent increases in prices for existing and new apartments, offsetting flat and declining prices in rural parts of the country.

Though these price increases sound impressive, they hardly indicate a dreaded housing bubble. By comparison, during the first quarter of 2005, as prices approached their peak ahead of the US housing crisis, they rose 12.5 percent over the previous year, with costs for homes in places like California, Nevada and Florida going up some 20 percent a year. Still, the price increases in Germany have the Bundesbank worried enough that it said recently it was monitoring the situation to keep it from getting out of hand.

But the real estate situation in Germany "is not comparable with the US and Spain," says Steffen Sebastian, chair of real estate finance at the University of Regensburg, in the southern German state of Bavaria. Today's real estate price increases are also nothing like Germany's real estate bubble in the mid-1990's, when Helmut Kohl's government provided tax breaks to support post-reunification investment in the former East German property market. Those tax benefits have since been halved.

Sebastian says that German real estate heated up about a year and a half ago, but that the difference between what happened in other countries hit by a housing crisis is that individuals, and not investment banks, are putting their own money into real estate. And they aren't just Germans, but people from across the Continent. "Much of the demand is from speculation across Europe," says Sebastian.

Sebastian also attributes the price increase to low interest rates, fears of inflation within Germany, general concern over the collapse of the euro and relatively few safe investment alternatives. German bond prices, for example, have become so low that investors are practically paying the German government to take their money. In contrast to the stock market and government bonds, German real estate appears to many investors as a safe bet that can earn rewards. Unlike opening a foreign bank account, buying real estate also comes with few regulations and restrictions.

"Italians don't care where they put their money as long as it is in German real estate," says Ruth Stirati, a real estate consultant who works primarily with Italians looking to buy apartments in Berlin. Stirati says that many of her clients are normal Italians who have a little bit of savings that they are too scared to put in Italian banks for fear the euro will collapse.

Even though Berlin lacks the kind of industry or job market that support other parts of the country, as Germany's political and (arguably) cultural capital, it has become a particularly attractive destination for international buyers. Many hundreds of individual Berlin apartments were sold in January 2012. More than half of those purchases were made by Italians, Russians, French, and other international buyers, according to a market report by German real estate market firm Engel & Völkers.

"Before there was steady growth in demand, and now it's become a flood," Stirati says of Berlin real estate. Before, Berlin was an insider tip, she says, but in the last two years the city has become the new trend for Italian investors because it's frequently profiled in the media. "Since the crisis there are so many investors who have come to Berlin that the prices are like waves," she says. "One month they are really high and the next month they go down."

Increases in Berlin real estate values have led to sticker shock for buyers and brokers accustomed to the years of low prices. "It's too expensive," says Rudolf Rude, a German engineer who dabbles in real estate investment. At the Plettner & Brecht auction in early June, Rude bought a 95-square-meter (1,020-square-foot) store-front in Berlin's trendy Prenzlauer Berg district for €178,000, about 40 percent above the listed price.

Rude attributes the price increases to Berlin's recent development, which puts it on par with Paris and Moscow, leading to more attention internationally. He says that even though he thinks he paid too much for the property, other investments are too risky and the stock market is too uncertain. "I like to put my money in the ground, in the earth, as cement gold," says Rude. He plans to open a high-end cheese shop in the space.

In the financial capital Frankfurt, by comparison, demand has mostly been from German investors who have money to spare, says Peter Talkenberger, a broker at AllGrund, a real estate consulting firm. In the city center there are few apartments available these days, he says. If an apartment does crop up, it's gone within a week. Still, he adds, "the market is not nearly as wild as Berlin. Berlin is on another level with so much international demand."

On The Brink Of A Bubble?

Wohlers, Rude, Stirati and others on the front lines of German's real estate market believe it will only continue to grow. But whether their forecasts will come true rests largely on the fate of the German economy. Regardless of a shrinking population, a strong job market and solid economic growth has kept demand for homes strong. More people are also moving into cities and looking for new homes.

The international rating agency Standard & Poor's predicts that German home prices will rise for another two or three years, even as the euro crisis engulfs neighboring countries. The agency points to lower unemployment, sustained low interest rates and the already low price to income ratios as reasons for its optimism.

But some experts have warned recently that as the euro crisis deepens, the Germany economy may not be immune for long. It would only take a spike in unemployment and interest rates to stall the country's brisk real estate market.

"You can count on more turbulence in the German real estate market," says the University of Regensburg's real estate finance chair Sebastian. "We are living in uncertain times and what we are experiencing happens once a century. We have seen so much that did not seem possible five years ago."

As a note of caution for would-be investors he adds: "It's not necessarily a bubble, but under no circumstance would I still put all of my savings into real estate." 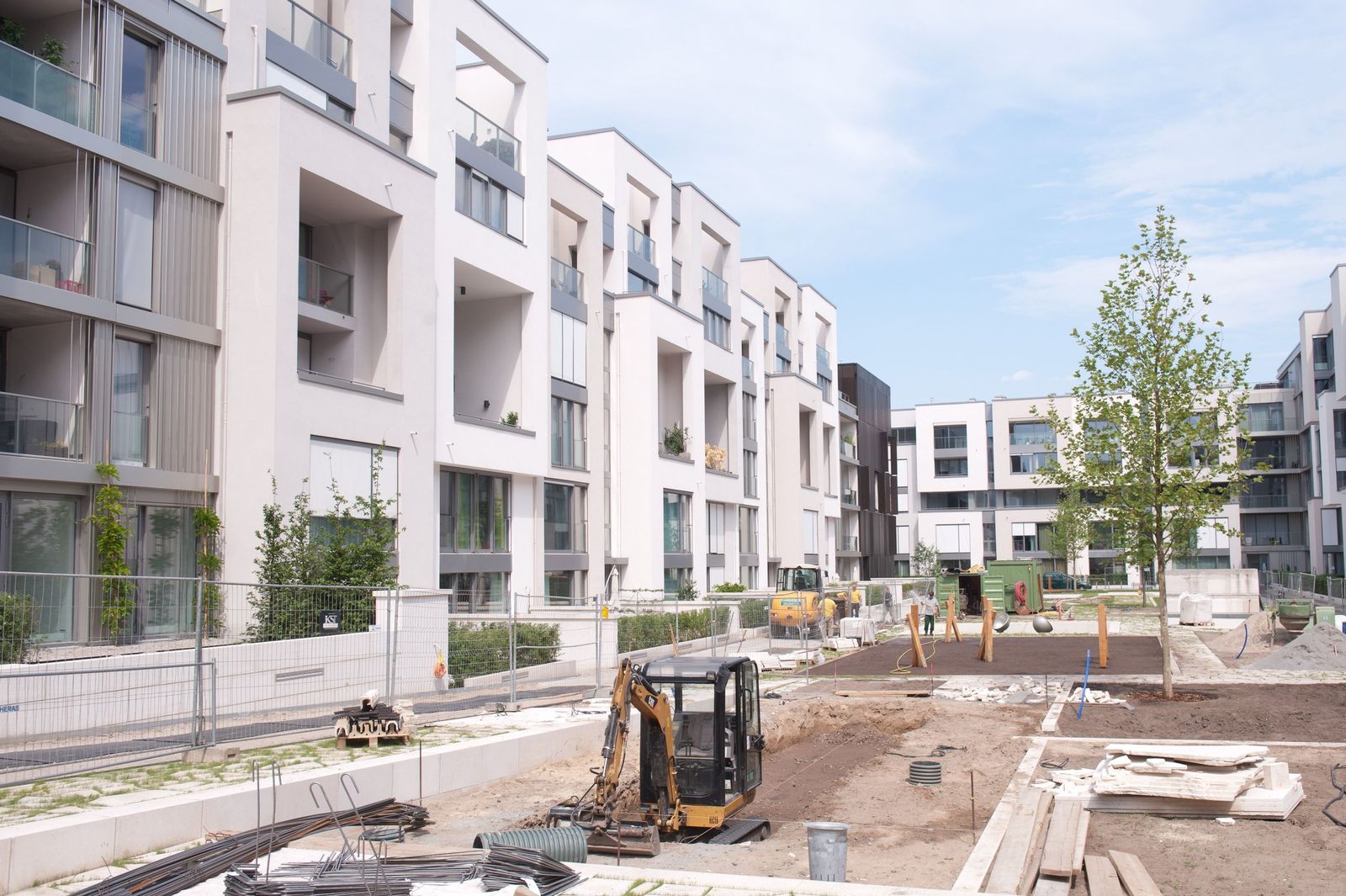 There has been a steadilly increasing demand for luxury housing, like this development in Berlin.