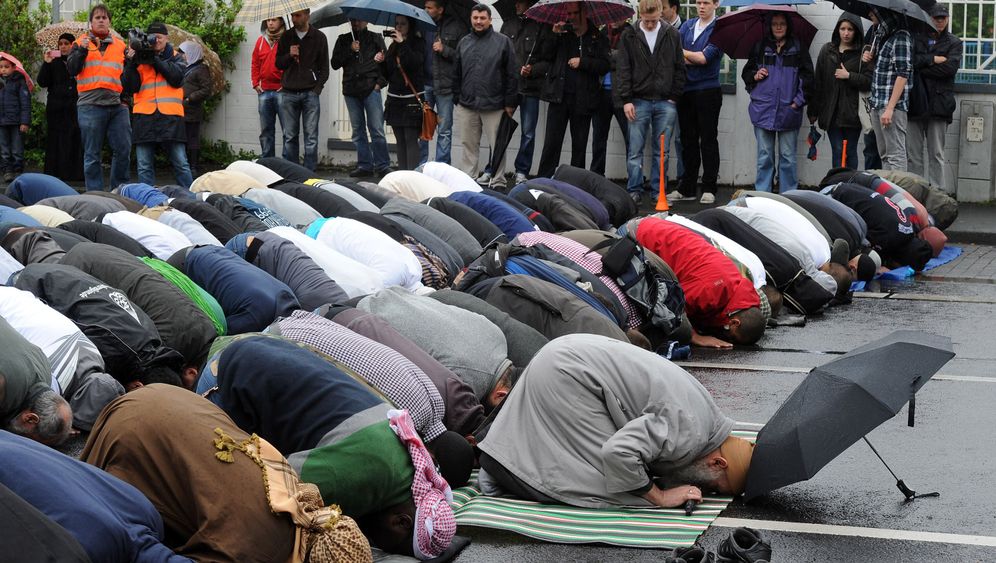 Photo Gallery: A Battle over Muhammad in Bonn

It was clear from the start that the tiny, right-wing populist group Pro-NRW would stop at nothing to attract attention in the run-up to state elections in the German state of North Rhine-Westphalia this Sunday. With Salafists in the state now reacting violently to Pro-NRW's inflammatory parading of Muhammad caricatures in front of Muslim establishments, the splinter party appears to have gotten its wish.

On Saturday, violence flared anew when Salafists attacked police protecting a Pro-NRW demonstration in front of a Saudi Arabian school in Bonn. Twenty-nine officers were wounded, two of them having been stabbed, and more than 100 people were arrested. On Monday, a 25-year-old man was arrested and charged with attempted murder in the knife attacks.

Ralf Jäger, interior minister for the state, promised that there would be "severe consequences," adding that he would "join the federal government in exploring all legal possibilities for countering these extremists." The police president in Bonn, Ursula Brohl-Sowa, spoke of an "explosion of violence like we haven't seen for some time."

The Pro-NRW march in Bonn consisted of just over two dozen people, but some 500 to 600 counter-demonstrators also gathered, including, according to police estimates, some 200 Salafists who had travelled to Bonn from across the country. Several hundred police were also present to keep the two groups separated.

Police spokesman Harry Kolbe said the march was peaceful until right-wing populists began showing their anti-Islam caricatures, including one by Kurt Westergaard, the Danish cartoonist who created one of the Muhammad drawings which set off global unrest in 2006. One pro-NRW member, Kolbe told SPIEGEL ONLINE, climbed onto the shoulders of a comrade in order to hold the placard above a police vehicle positioned so as to block the view. "The Pro-NRW people very deliberately provoked," Kolbe said.

Still, he said, it was clear that many of the counter-demonstrators had come prepared for violence. Several more knives were found among the 109 people arrested, along with pepper sprays. The vast majority of those taken into custody, said Kolbe, were not from Bonn but had travelled from elsewhere in the country to take part in the demonstration. Once the violence started, he added, several counter-demonstrators began tearing up the yards of nearby houses in the search for projectiles, even demolishing a decorative fountain in the process. "When it comes to the violence," Kolbe said, "we believe that most of those involved were Salafists.

Germany's Salafists have recently attracted significant public attention due to an ongoing campaign to distribute millions of free copies of the Koran throughout the country. More ominously, however, the group, which strives to adhere to the pure form of Islam practiced by the Prophet Muhammad, has shown a readiness to promote violence. Salafist connections with jihad groups are not uncommon and the man who shot to death two US servicemen in 2010 was likewise linked to the group.

Moderate Muslims in Germany have consistently sought to distance themselves from the Salafists. On Monday, the Central Council of Muslims in Germany -- one of many such groups which represent a portion of Germany's Muslim population -- issued a statement condemning the Saturday violence. "Reacting to provocation with violence is not acceptable for peace-loving Muslims because it is un-Islamic and, more than anything, plays into the hands of the right wing," the statement said.

Indeed, the violence of Saturday -- coming on the heels of a similar confrontation between Salafists and Pro-NRW last week -- would seem exactly what Pro-NRW had been hoping for. The stridently anti-Muslim party has spent years struggling, and failing, to attract the kind of attention comparable right-wing populist parties have achieved in virtually all of Germany's neighboring countries. Sunday parliamentary elections in the group's home state have spurned them to once again try to attract votes.

And provocation has been the cornerstone of that effort. "It is of course part of the campaign," Pro-NRW spokesman Markus Wiener told SPIEGEL ONLINE on Monday. "We are a party that is critical of Islam and we wanted to show our standpoint."

To do so, the group launched a "Muhammad caricature contest" earlier this spring and is now parading the "winners" in front of area mosques and other Muslim establishments. The move, of course, is cynically calculated to attract the kind of attention the formerly unknown Danish newspaper Jyllands Posten received after it published similar caricatures in 2005.

Whether the strategy has been successful will become clear once the votes are counted on Sunday. In the meantime, the Pro-NRW parade of provocation will continue. Bielefeld police had sought to ban a planned right-wing march in the city on Monday, but a court intervened and allowed the Pro-NRW demonstration to go forward. Some 15 anti-Muslim marchers took to the streets, along with 400 counter-demonstrators. This time, there were no immediate reports of violence.

8 Bilder Photo Gallery: A Battle over Muhammad in Bonn