For several minutes Russian President Dmitry Medvedev and German Chancellor Angela Merkel slide a piece of paper back and forth across the table, scribbling enthusiastically. Then Medvedev lifts the paper up a little, so Merkel can read it better. The chancellor chuckles. 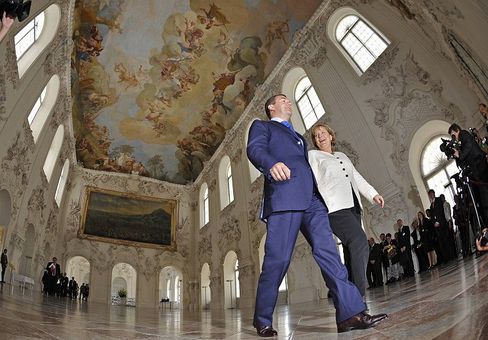 Medvedev charmed Merkel at their meeting in Munich Thursday.

The Russian president is satisfied. He has managed to get a smile out of the chancellor, who often looks slightly grumpy in public. And he has also managed, in his direct yet charming manner, to make Thursday's meeting between the two leaders in Munich a success.

After the murder of the Russian-Chechen human rights activist Natalya Estemirova on Wednesday, many participants in the Russian-German forum "Petersburg Dialogue," which was established in 2001 with the aim of promoting contact between civil society in the two countries, initially feared that the crime could poison the atmosphere between the two top politicians. "There is this eerie feeling that someone wanted this murder to coincide with the state visit," commented one member of the German delegation ahead of Medvedev's arrival.

Participants can also remember all too well past verbal skirmishes between Merkel and Medvedev's predecessor, Vladimir Putin. In May 2007, the West reacted angrily when the Kremlin had police violently crack down on small opposition demonstrations. At the EU-Russia summit then, Merkel felt obliged to remind Russia that it too needed to protect the rights of its citizens. Putin, for his part, refused to tolerate the preaching from his German counterpart.

But Medvedev is different. The new man in the Kremlin came across in Munich as someone who is insightful and not afraid of self-criticism. On Wednesday he had responded promptly to the crime in Chechnya, announcing shortly after the news of Estemirova's murder broke that he was deeply shocked. "Yesterday was a sad day," said Medvedev during his joint appearance with Merkel in Munich.

Shock and respect could be heard in his voice as he spoke in Munich about the murder of "our human rights activist." He paid tribute to Estemirova, even going so far as to call her a model for future generations: "She deserves justice, because she defended our legal system." Medvedev also repeated his promise that the killing would be thoroughly investigated. "I am sure the killer will be found," he said. "I am sure the person who committed it will be punished."

Merkel also expressed her shock at the murder, describing Estemirova as a "courageous woman." She stressed that the murder had to be investigated, saying she believed the Russian authorities "will do everything they can to catch the perpetrator."

Medvedev did not only manage to win over Merkel, but also many of the participants of the Petersburg Dialogue conference. Even Estemirova's colleague at the human rights organization Memorial, Arseni Roginski, who talked about her death in an interview with SPIEGEL ONLINE, praised the Kremlin boss for having clearly expressed his condolences. "This is much more than his predecessor Putin was capable of doing after the murder of (Russian journalist Anna) Politkovskaya," Roginski said. "At the time, Putin only remarked cynically that Politkovskaya's death harmed Russia more than any of her articles." Politkovskaya was shot dead in her Moscow apartment building in October 2006. She was acclaimed for her reporting of human rights abuses in Chechnya and known for her Kremlin-critical stance.

Russia's human rights commissioner Ella Pamfilova was also satisfied with the Russian leader's speech, saying he had given "an important impetus" to the murder investigation. Now she hopes that Medvedev will instigate a comprehensive reform of the judiciary. "What worries me is the series of unsolved murders of journalists and human rights activists that we have seen since the early 1990s," she said, explaining that the problem is that the murderers can usually expect to get off scot-free. "An unsolved murder provokes a series of other attacks and violence," explains Pamfilova.

In a Good Mood

With his assured comments, Medvedev managed to deftly deal with the trickiest issue on Thursday's agenda. Appearing self-confident, quick-witted and charming, the young president gained significantly in stature during his appearance in Munich.

Merkel appeared to be in a good mood, almost relaxed: At least she would not need to reprimand this president, she looked like she was thinking. Accordingly, space remained in the tight timetable for the main subject of the meeting, namely German-Russian relations.

The results of the two-day Petersburg Dialogue conference were presented. Around 300 delegates from both countries -- including representatives of the media, politics and civil society -- had been debating how Germany and Russia could tackle the current economic crisis together. Ideas like the creation of a joint German-Russian commission for fighting corruption were discussed. In addition, there were also concrete successes to celebrate, such as the foundation of a German-Russian energy agency and Berlin's commitment to provide guarantees for German exports to Russia as part of a €500 million ($706 million) scheme.

The two sides also agreed to develop a common school textbook together. Work on the project is set to begin later this year. If anything concrete comes out of the efforts, it will be a remarkable success. Russians and Germans currently have a very different view of their shared history. A common school textbook could help to promote mutual understanding between the two nations.

The chancellor went as far as to praise the way that German-Russian relations had "greatly intensified." Nevertheless, there was also criticism of the elaborate format of the Petersburg Dialogue forum. The Russian political scientist Vladislav Belov told the Moscow-based German-language newspaper Moskauer Deutsche Zeitung that the event urgently needs to be "de-bureaucratized."

Andreas Schockenhoff, the German government's commissioner on German-Russian relations, also says that more concrete projects need to be agreed upon in the future. "But the dialogue is getting more and more open," he says. "Last year, the Georgia war dominated the mood, but this year there is a very different atmosphere of trust."

The crisis opened the eyes of both sides, Schockenhoff said. "Following the conflict in the Caucasus, Putin asserted that the West is dependent on Russia, but Russia is not dependent on the West. I don't think anyone in Russia believes that any more."