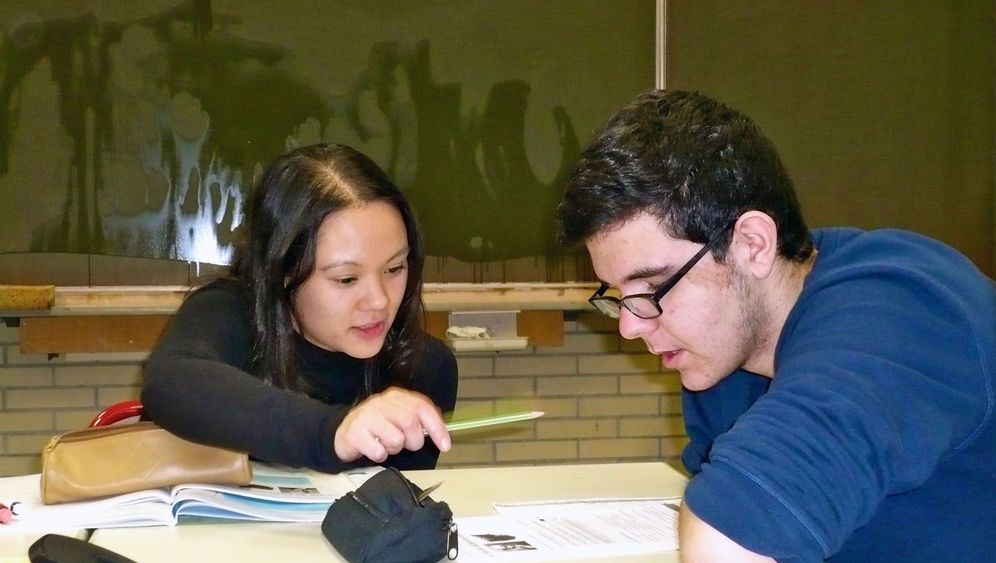 Photo Gallery: A Challenge for German Schools and Immigrant Children

The German word Sachertorte gives 15-year-old Zacharias trouble. The dense Austrian chocolate cake may be tasty, but the young man can only manage to pronunciate it if he speaks slowly and softly.

Selbstständig, or self-employed, comes a bit more naturally. "That means to do business," the student says, sitting in his intensive German immersion class. For years, Zacharias's family used to sell gyros in Greece's second-largest city of Thessaloniki -- until the euro crisis hit and his father had to sell the business.

That's how Zacharias ended up with 26 other students in the "international preparation class" at the August Lämmle Intermediate School in Leonberg, near Stuttgart in southwestern Germany. Most of the students, aged 11 to 16, come from countries plagued by the euro crisis, and their numbers grow every week.

"We can sense the economic weakness of a country right here by the number of students in this class," says the school's principal, Philipp Steinle. The more students from any one country, the worse shape that country is in.

The growing number of students from Southern and Eastern Europe in German primary and secondary schools is a trend visible across the country, and it's leaving the education system scrambling to meet the students' needs. Germany's Federal Statistical Office does not count children or youths separately when it measures immigration, but the overall figures are clear enough: In the first six months of 2012, there was a sharp rise in immigration from euro crisis countries compared to the previous year -- 53 percent more from Spain, 78 percent more from Greece. And alongside the highly skilled workers, academics and students are many working-class families with children, hoping to find jobs on the German labor market.

German schools are faced with an immense challenge in that nearly all recently immigrated students start with zero knowledge of the German language. Some manage to catch up and integrate into regular classes in a matter of weeks, but for others the learning process can take months. Exacerbating the problem is the fast pace at which their numbers are growing week-to-week, according to several school principals spread across the country. Many say they don't have enough staff who can teach German as a second language, nor do they have the budget to contract new teachers on a freelance basis.

Zacharias and his classmates in Leonberg are lucky. Their schedule includes 25 hours of specialized German language instruction per week -- a goal many other schools can only dream of.

"Without the additional personnel and volunteer workers that we have, that wouldn't be possible for us either," says Steinle, the school's principal. Zacharias' teacher, Sandra Tauer, was hired temporarily at the August Lämmle School to cope with its influx of immigrant students. She is a fellow at the non-profit organization Teach First Deutschland, which supports schools with high-needs students in five German states.

Zacharias's father ended up finding work in the municipal snow removal services department, and he's been in Germany for a full year. Zacharias says Greece seems like a far-off country now, despite its nearly constant presence in the headlines. Ask him about German Chancellor Angela Merkel's austerity policies, and he responds with fury.

"The Greeks hate the Germans, Merkel is too harsh," Zacharias blurts out. "Greece will be dead soon, saved to death." He sees his future even further away from his homeland. He wants to go to university in Germany, then on to the United States. But first, he says, he has to finish high school.

Like Zacharias's family, many immigrants from euro-crisis countries end up in the economic powerhouse states of Baden-Württemberg and Bavaria in the south. In the latter, so-called "transition classes," where students with no prior knowledge of German are prepared for the regular classroom, have been filling to capacity since last year. The state's Education Ministry reported 845 students in such classes last year -- up from just 470 in 2010. Schools in other German states report particularly fast growth in students from Bulgaria and Romania.

Also notable amid the immigration trend in German schools is the number of students who are arriving from countries in which their families were already immigrants.

"This is a totally new phenomenon, brought about by the euro crisis," says Michaela Menichetti, integration commissioner for the school district in Reutlingen, also near Stuttgart. For many students, their arrival in Germany is their second time starting from scratch. "We have Turkish students who are coming to us from Bulgaria, Russian-born students from Portugal and Greeks from Russia. It's an enormous challenge for the schools."

Isabel, 16, is one such student. She was born in Germany but moved with her family back to their native Sicily when she was four years old. "My father always earned less in Italy, that's why we're back here," she says. After seven months in Munich, Isabel now lives with her parents and two sisters in Leonberg. "I was totally lost in the beginning," she says, but adds that she has since found her footing. "I'd rather be in Italy, but if I have a future, then it's in Germany."

Isabel, Zacharias and their classmates know the German language is an integral part of that future. One of their new vocabulary words in class is Kehrwoche, a phenomenon particular to the region that regulates when and how often households have to clean communal spaces like sidewalks and stairways. Germans from outside the region often sneer at the word as the epitome of southern German uppityness, as do many of the immigrant students in class. Mehdi, a 16-year-old from Iran, says he's still astonished by the strictness of the southern German cleaning schedule. "We don't have anything like that in Iran," he says. "We clean when we want to."