Kaleck: It did not surprise me, but I do find it shocking. Edward Snowden is a whistleblower, someone who followed his conscience and went public with a scandal that is global in nature: the threat intelligence services represent to all Internet freedom. The issue should be approached with more seriousness.

SPIEGEL: Are you suggesting that the interior minister hasn't done so?

Kaleck: I consider it scandalous to say, in some kind of gesture of submission to the United States, "We understand that you are treating him as a criminal and we view things similarly" -- when, at the same time, an investigative committee is conducting work in parliament that would have been inconceivable without Snowden. I am hopeful that there are people sitting on the parliamentary committee and also in the German government who will approach the problem in a more responsible way.

SPIEGEL: What exactly does Snowden stand accused of?

Kaleck: We attorneys only know what is in the few documents that have been published on the Internet. De Maizìere is presumeably of the opinion that there has been a violation of an espionage law that is 100 years old and rather vague.

SPIEGEL: Or perhaps your client is just being accused of theft.

Kaleck: That could well be. But in this situation it was justifiable to commit an act of data theft in order to protect the higher standing rights of the US Constitution and international law. Mr. Snowden is in no way seeking to enrich himself. This has to do with enlightening people and initiating a public discussion that concerns not only the people of the USA, but could also protect us, the global community, from major threats. The first small steps in scaling back the extensive surveillance techniques are already visible. Still, the recent hearing of experts in the investigative committee made clear that there is much more that must be done in Germany too.

SPIEGEL: Given de Mazìere's statements, has the possibility that your client could come to Germany been eliminated for good?

Kaleck: No, because the interior minister cannot decide on this issue alone. Fortunately, the principle of separation of powers applies in Germany. And the parliamentary investigative committee has made a unanimous decision to question Snowden as a witness. I have therefore requested that the committee clarify with the federal government whether Snowden would be allowed to enter Germany and be questioned here. For as long as the government has not rejected this possibility, the path to Germany remains open.

SPIEGEL: In a position statement to the committee, the government said it believes that the welfare of the state could be jeopardized if Snowden were to come here.

Kaleck: But that wasn't a final decision -- it was a snapshot without any truly valid arguments. Things are in a state of flux and could still change as a result of political pressure.

SPIEGEL: Members of Merkel's coalition government have repeatedly stated that Snowden would indeed have to be immediately extradited to the United States if he were to enter Germany. Is this a foregone conclusion?

Kaleck: No, of course it isn't. Before an extradition can take place, a comprehensive review is conducted by a higher regional court. Afterwards, there's a possibility to appeal to the Federal Constitutional Court. If the courts were to come to the conclusion that we expect -- that he is being hunted for a political crime -- then he could not be extradited to the USA.

SPIEGEL: Do you consider that to be realistic?

Kaleck: At the end of the day, the decision as to whether he can enter the country and be guaranteed a safe stay is a political one. Legally that is all possible. On this point, an engaged public could tune in and say that Snowden's contributions -- to the country, its companies and its citizens whose communication are monitored and analyzed in multiple ways -- are so great that he must be handled differently. Journalists who have been involved in the disclosures have been awarded prizes, like those from SPIEGEL (eds. note: SPIEGEL was the recipient of Germany's top journalism prize forits story about the NSA's spying on Chancellor Merkel's mobile phone). The German government should play a different role here because we only know the degree to which we have been monitored thanks to Edward Snowden.

SPIEGEL: What could Snowden, as a witness, reveal to the investigative committee that isn't already known?

Kaleck: He purposely assembled documents over an extended period of time; he structured and prepared them in a way so that others could understand them. I would venture to say that he has enough to report that the committee could spend weeks listening to him. It's not as if Edward Snowden just plugged in a USB stick, pulled it back out and then ran off. There are lengthy considerations behind his actions and -- let me emphasize this again -- a carefully thought out choice of conscience.

SPIEGEL: How does your client assess his situation?

Kaleck: He is being hunted by a superpower and is in the hands of another major power, and he can see how other states -- some more and others less sympathetic -- are waiting to see what happens with him. It is not a satisfactory situation. But he has also emphasized again and again that this is not about him as a person -- he is concerned about the issue at hand.

SPIEGEL: How does he perceive the German debate?

Kaleck: He says: If Germany advocates for me, it may also help to serve the protection of whistleblowers. The good thing is that he wasn't taken from Hong Kong back to the USA with a hood over his head, handcuffs and shackles and condemned to silence. He is in a position, from time to time, to participate in public debates and to send a message -- a message that although the risk is very high and some things have to be sacrificed when informing people, it doesn't have to mean that one will ultimately land in Guantanamo or solitary confinement in a US high-security prison.

SPIEGEL: Politicians with Merkel's conservatives and with the center-left Social Democrats on the investigative committee, have announced they would like to question Snowden in Moscow. Why are you opposed to that?

Kaleck: Because it would create a very high risk for my client. Russia only took him in under the assurance that he would not further irritate the "American partner." That's why we cannot agree to questioning in Moscow.

SPIEGEL: Your client's temporary asylum in Russia expires in July. What will happen then?

Kaleck: We assume that it will be extended. There is still enough time.

SPIEGEL: Do you think there's a realistic chance of Snowden returning to the US?

Kaleck: Everyone who has something to do with this are aware of the fact that a mutually agreed solution with the US authorities would be the most sensible option. It's also his home. It's also clear that the US doesn't just forget things. They could strike at any time -- if not today, then in five years. And if not in five, then in 10 or 20 years. That's why we would like, at least in the medium-term, to find a solution that will be bearable for Edward Snowden.

Kaleck: He cannot simply be presented as a traitor dangerous to the public. He ought to be given greater consideration for what he did ...

SPIEGEL: ... by a US government that has pursued him now for almost a year as an enemy of the state?

Kaleck: Let me reiterate: Snowden's decision was in no way based on selfish motives. He initiated a discussion about freedom on the Internet in the US and globally which, incidentally, is being recognized by a growing segment of the US public. Besides, the claims of concrete damages have not been proven in a single instance. Hence, one would hope that a democratic US government would smooth the way for him to return. What we are dealing with here at the end of the day is a young man who is being celebrated around the world for his civil courage -- especially by the generation that now considers the Internet to be an important part of the civic space. The US would be well advised to recognize that he is a role model for this generation.

SPIEGEL: Are serious negotiations taking place over his return to the US?

Kaleck: There are negotiations, but I am not a party to them and they haven't delivered any results yet.

SPIEGEL: How is Edward Snowden holding up under the current circumstances?

Kaleck: From afar, he makes a good impression. He knows what he wants and contact with him is very pleasant because he isn't an egocentric person but rather one about whom you are left feeling: Now there's someone who is at ease with himself. He feels prepared for everything that is now happening. 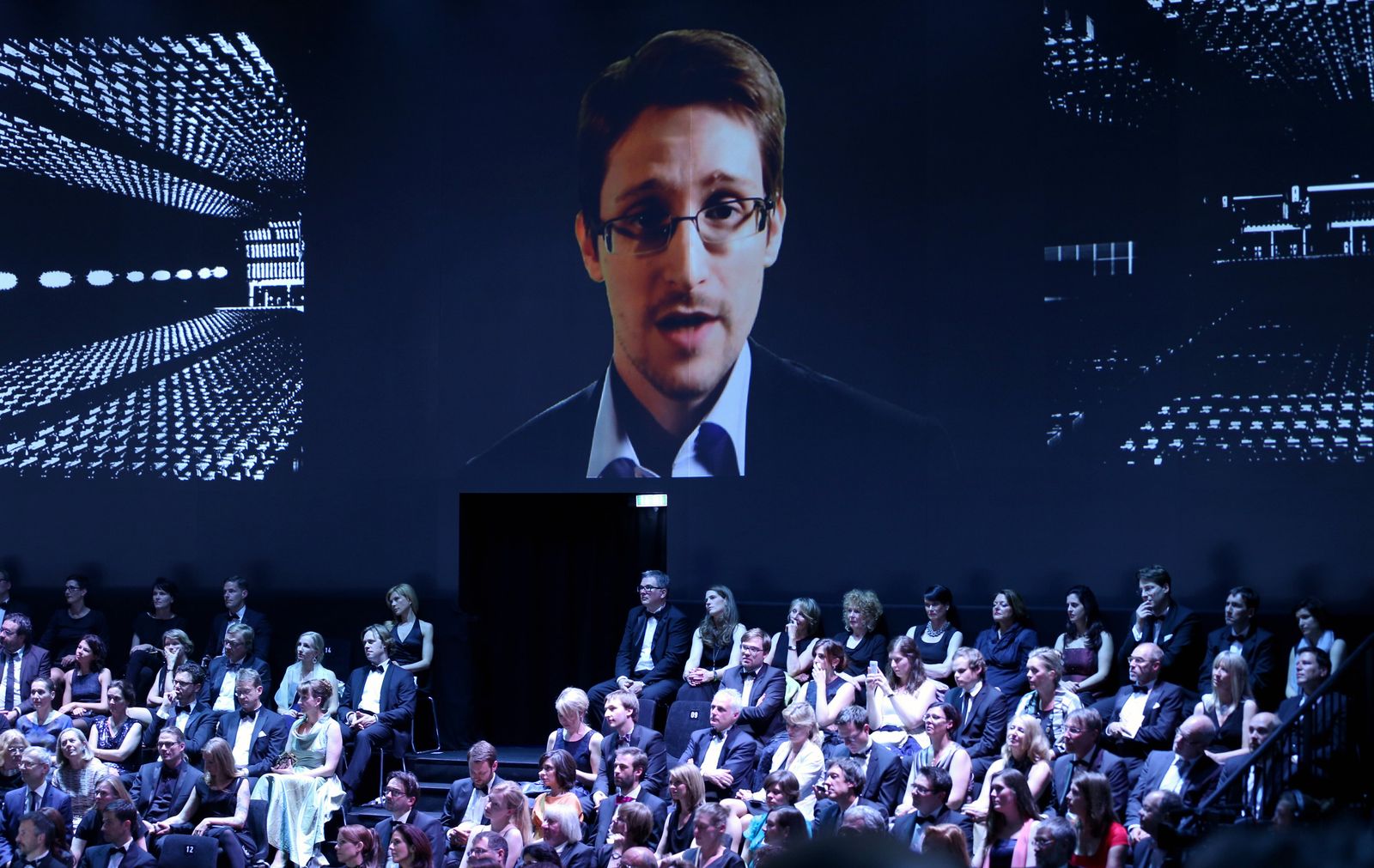 NSA whistleblower Edward Snowden appeared by video at the ceremony for Germany's most prestigious journalism award just over a week ago.