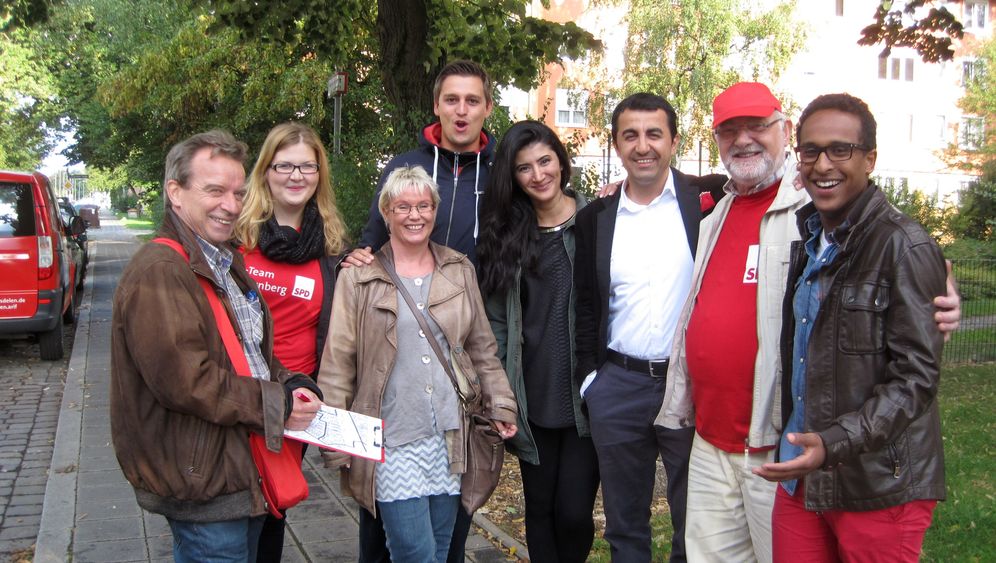 "Good evening. I don't want to bother you, but I'm the candidate for the Social Democrats -- can I give you a flyer?"

Gabriela Heinrich, a Nuremberg-based candidate for a seat in Germany's parliament, the Bundestag, knocks on doors in her district three or four nights a week from 5 to 7 p.m. Sometimes the people behind those doors smile and nod, excited to meet the woman whose picture is on the center-left Social Democratic Party's (SPD) posters around the city; other times they politely decline; sometimes they even slam their doors. Each time, Heinrich smiles and tells them to have a nice evening.

On this particular night, a half-dozen volunteers split up the list of blocks in the low-income area of Nordostbahnhof near the eastern train station and set off with their red SPD bags full of flyers and clipboards. Their goal is to knock on around 15,000 doors in Heinrich's district before election day on Sunday, Sept. 22. Although door-to-door campaigning of this scale is a new phenomenon in Germany, the volunteers say the responses have mostly been friendly.

Almost a year after US President Barack Obama's re-election campaign was lauded for its sophistication in ground organization, data and microtargeting, German parties are trying to find ways to translate his winning strategy into a German electoral setting. Most of his strategies, it seems, wouldn't work here for sundry reasons.

But the SPD's goal of knocking on 5 million doors across Germany -- an unprecedented, nationally coordinated canvassing campaign -- is one key example of the way German parties can, and are, using ideas from the Obama campaign and applying them in a way that fits for Germany. With over one-third of Germans still undecided on which party they will vote for, the campaigners are hoping the door-to-door strategy can draw voters back to the party.

The SPD is currently polling at 26 percent, trailing 15 points behind Chancellor Angela Merkel's conservative Christian Democrats -- and most political observers long ago wrote off any possibility of the SPD and its chancellor candidate Peer Steinbrück pulling off any kind of upset win. But if it can borrow a few tools from Obama's campaign to yield a better result, the SPD isn't afraid to do so.

"The SPD's canvassing strategy is pretty much inspired by Obama," said Jan Philipp Burgard, a journalist and political scientist who covered both of Obama's campaigns for German public television station ARD and wrote a book on what German politicians could learn from the American leader. Still, he said, even the ideas incorporated by the SPD "are not as modern or high-tech as it was in the United States."

Burgard noted that there is a long tradition of German politicians picking up campaign tactics from their American counterparts, starting with former Chancellor Willy Brandt emulating the campaign of John F. Kennedy. He says the Obama campaign has sparked unprecedented interest among German party officials.

And so it was that German observers were among the many international political groups to make the voyage to swing states like Ohio and Florida last fall, bringing back their own impressions and ideas of what could be co-opted for the German political sphere.

There are a number of explanations for why an Obama-style campaign isn't easily replicated in Germany, starting first and foremost with finances. Chancellor Angela Merkel may be the most powerful woman in the world, but that measure surely isn't based on her party's election-year coffers. German parties have just a small fraction of the financial resources available to US campaigns. For its national campaign, the SPD is expected to spend €23 million ($30 million), with incumbent candidate Angela Merkel's Christian Democratic Union spending a slightly more modest €20 million. These figures pale in comparison to the more than $1 billion spent to secure a second term in office for Obama.

Without the kind of billion-dollar operation that has become commonplace in the US, the extensive ground organization and legions of paid campaign staffers simply aren't possible.

On some fronts, there are cultural or legal complications as well. The Obama campaign's use of a centralized voter file to target specific voters -- one of its key accomplishments in 2012 -- would not be possible in Germany, where privacy laws are stricter and voters are more wary of personal data being collected.

While canvassing has happened on the local level in Germany for a long time, organized on a district-by-district basis, the SPD effort this year is the first time either major party has outlined a national plan for all districts to participate. According to SPD figures, at least 260 of the 299 districts have implemented some sort of canvassing program this fall, and the party just hit the 3 million mark on the numbers of homes visited. The party even built a website this year to recruit and coordinate volunteers.

"For the SPD, this is the first time in Germany that they've spent so much time on actually training the people coordinating (canvassing)," say Andreas Jungherr, a researcher at the University of Bamberg who focuses on campaign strategy. "The newness is the scale of the thing."

Thomas Bosch, chief of staff to the SPD's deputy national chairman, says the Obama campaign helped the party rethink the way it perceives its relationship with voters: that the party needs to actively reach out, rather than expecting voters to come to them.

"The focus of our campaign is to invite people to become a part of the campaign," said Bosch, who spent time in the US last year observing the election. "There is a change in the way we campaign: We go to people, people don't have to come to us to get information about the election."

That sentiment is a big shift in philosophy for German campaigns, where in the past most voters' contact with candidates and party members has been when they take the initiative to go to a rally or stop by a booth in a public area. And many people are still uneasy about answering their door for a political party. So instead of engaging in political discussion or asking a long list of questions, the SPD volunteers offer flyers and a red SPD pen and then go on their way.

"People are astonished that we are coming," says candidate Heinrich, before ringing the doorbell at another set of apartments.

A Big Step for German Politics

Canvassing, it seems, is an area where German parties can truly apply some of the lessons from the Obama campaign. Given the strong local and national party structures in Germany, which stay in place even after election season, the parties already have an infrastructure on which to build their ground organization.

Julius van de Laar, a German national and former staffer for Obama's 2008 and 2012 campaigns who now runs his own political consulting shop in Berlin, said the SPD's canvassing strategy is a great step for German politics.

"From what I've experienced thus far," he says, "door-to-door canvassing has been an effective way to mobilize the base and reach out to undecided voters."

Still, in contrast to the US, where microtargeting helped the Obama campaign focus not only on geographic areas but also on specific people, the SPD is knocking on doors without knowing anything about the people behind them.

The party's decisions about which neighborhoods to visit are based on an analysis of precinct-level results from past elections. Specifically, they focus on neighborhoods that had been SPD strongholds in the past but saw lower voter turnout for the party in 2009 -- in other words, the places where they have the most potential to get back those votes if their SPD voters come to the polls later this month. In Nuremberg's Nordostbahnhof, that means knocking on doors in a low-income area that has traditionally voted with the SPD.

A Game Changer for Europe?

At 7 p.m., the Nuremberg canvassers meet back up and swap stories. Heinrich talks about the woman who slammed the door in her face, just saying, "No!" Another volunteer, Nasser Ahmed, the head of the SPD's youth organization in the city, shows off a photo of the pet parakeet that landed on his fellow canvasser when one woman opened her door.

It's difficult to tell what ultimate effect the SPD's canvassing effort will have on Sept. 22. But this is one Obama-inspired idea on organizing a campaign and utilizing voters that many experts in Germany predict will have a big impact in the future.

"Door-to-door canvassing could be a true game changer in the way campaigns are conducted in Germany and throughout Europe," van de Laar says.