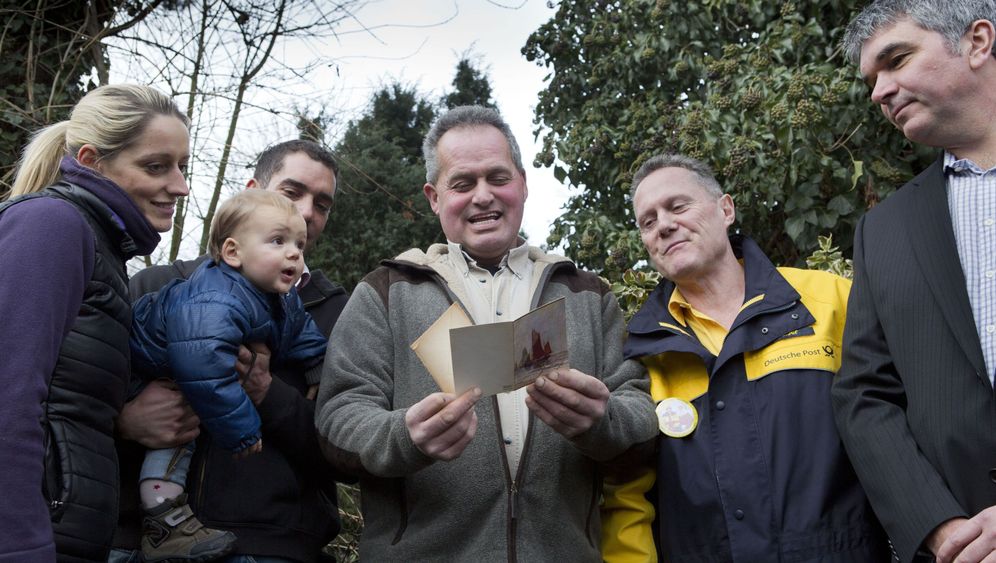 With their romantic snow-covered pine trees, narrow handwriting and envelopes stamped with the Nazi imperial eagle, the letters arriving at some German households this holiday season are certainly a novelty.

It has taken 71 years for them to reach their destinations, and the addressees of the 86 letters have long since died. They were the friends and relatives of German soldiers stationed on the British island of Jersey in 1941. A batch of letters from the occupying force was secretly held for decades after they were stolen in an act of defiance against the occupiers. They turned up several years ago when an anonymous man donated them to the Jersey Archive, where they were translated and documented. Now, they have finally been sent.

On Tuesday, Mühlheim am Main resident Engelbert Josef Bergmann received the first of the extremely late Christmas greetings, a card written by his grandfather. Nine others were also scheduled to be hand-delivered to the descendants of other senders.

But those expecting to find old military secrets in the texts will likely be disappointed. Most of them are private Christmas greetings sent home to the families of the German soldiers, who were occupying the island in the English Channel at the time. They are full of ordinary details and desires.

In sloping script, one example reads: "I sent you, dear uncle, two bottles of French schnapps. I couldn't get any cognac, but I think you'll also like the schnapps. I've already tasted it and I liked it although it is a bit strong. It's a Calvados (60%). I hope you'll enjoy it at Christmas or on New Year's Eve. It's the best medicine when you've got a cold."

Many of the letters were penned on December 16 and 17 of 1941, with the expectation that they would arrive in Germany before Christmas. Their delivery this week coincides with the date the letters would have been received had they been sent.

Some were written by soldiers who had only just arrived on Jersey, many amid stormy conditions. One German soldier describes his five and a half hour journey from Granville to Jersey in gale force winds. "I had never endured something like that," the man wrote. "The waves were so high our ship could go no further, the waves even bounced over the ship. We all got seasick and had to hang on to each other."

The group of young men who "liberated" the letters from the German field post office on Jersey did so in an "act of passive defiance against the enemy," the UK museum news portal Culture24 wrote when the letters were donated to the Jersey Archive in 2006. The Germans had been on the island for some 18 months, and resistance to the occupiers was growing.

"V for Victory signs had begun to appear and small acts of resistance began to occur to disrupt military rule," says a statement from Jersey Heritage, the organization responsible for the island's historic preservation. "Many islanders were prosecuted in German courts for insulting the authorities and there is no doubt, had the young men been caught taking the letters, they would have been severely punished."

The main letter thief has since died. His middleman, who held the letters for some 66 years before contacting the Jersey Archive, wishes to remain anonymous.

Jersey Post worked with Deutsche Post, the Red Cross and military historians to find the addressees and their relatives in Germany, and managed to find 10 people, though more could follow. "When we were asked to help, we first thought it was an impossible task," says Michael McNally from Jersey post. "So much time has passed and Germany has changed considerably, both geographically and demographically. Finding 10 of the soldiers' relatives was more than we could have hoped for."

Stuart Nicolle from the Jersey Archive calls the letters a remarkable record of the occupation. "We have plenty of evidence of how islanders were coping with the conditions during the occupation, but these letters give a unique and fascinating insight into how the occupiers were feeling."

The German Wehrmacht took over the island of just 180 square kilometers (69 square miles) in the summer of 1940 as part of their "Atlantic Wall" against the Allied forces along Europe's western coast. Before the invasion, more than 20,000 residents were brought to safety in the UK. During the occupation, forced laborers endured miserable conditions to build tunnels that were later used as an underground hospital. Many of them died during the construction.

In 1942, Adolf Hitler ordered the deportation of more than 2,000 civilians to the German city of Bad Wurzbach, where they were held in internment camps. Today, the bunkers erected by the Germans along Jersey's coast can still be seen, and some are used as museums.

Despite the hardships islanders faced during the occupation, there were people like Leslie Sinel, who documented their unbroken optimism in her diary. "The end of the year finds us quite cheerful and quietly optimistic for the next 12 months although local conditions have greatly deteriorated; there is still a lot to be thankful for," one passage reads. Then, on November 7, 1941 she wrote: "The Germans appear to be very depressed and they are all wishing for a quick finish to the war."

The wet winter and the slow pace of Jersey life seemed to take a toll on morale among the German troops. They were so bored that not even playing cards brought relief, one soldier wrote. Another wished his loved ones a merry Christmas and concluded: "But what I hope most is that the war will come to an end soon, so that we can all enjoy life again."