One could almost pity him. It's last Friday, and the Social Democratic candidate for the chancellorship is standing in front of the party's headquarters in Berlin, where he is expected to kick-start the election campaign. The September vote is only 100 days away.

About two dozen fellow party members and a few journalists have turned up for the event. Minivans with mobile election posters are waiting in nearby side streets to be dispatched on their missions. is speaking, but his words are constantly being drowned out by the sounds of motor scooters and cars.

Which missile does he intend to ignite to finally inject some fire into the campaign, a journalist asks the candidate? "Me," says Steinbrück. Just as he is about to criticize the current administration's "chaos squad," a big truck roars by outside.

To make matters worse, the candidate is on his own, which was not part of the script. Sigmar Gabriel, the chairman of Germany's center-left Social Democratic Party (SPD), was supposed to be there. But, once again, Gabriel is absent. This time he is stuck in traffic. The joint campaign appearance has failed, and there will no photos of them together. Perhaps that's a good thing.

The chairman and his candidate are barely able to conceal their dislike for each other in public. When Steinbrück appeared last Thursday evening on Maybrit Illner, a popular talk show on the ZDF television network, Martina Michels, an SPD member for 23 years, gave him a piece of her mind. "I would have chosen Sigmar Gabriel as the candidate. He seemed more authentic to me -- and younger," she said. "Certainly younger, but also heavier," Steinbrück said caustically.

Insiders report that during internal meetings, Steinbrück often stares blankly into space when Gabriel speaks, his face completely devoid of expression. Sometimes he opens his mouth a little, as if to expel some of his consternation through his mouth. And Gabriel, with every gesture, also makes it clear that he no longer believes Steinbrück can win.

More than three months before the election, Germany's Social Democrats are in terrible shape. The SPD has been consistently below 30 percent in every poll for months, and the candidate's approval rating, at 34 percent, is far behind that of the incumbent, Chancellor Angela Merkel. The numbers seem to be set in stone.

The frustration has penetrated deep into the party, where campaign workers are waiting from instructions from the leadership. But they're not getting any because the three at the top dislike each other. Parliamentary group leader Frank-Walter Steinmeier and Gabriel have mistrusted each other for years. Steinmeier sees the chairman as an unreliable political activist while Gabriel sees Steinmeier as too phlegmatic and accuses him of refusing to attack the government.

The chairman and the candidate at first seemed able to get along, but their relationship has become severely strained. Gabriel wanted Steinbrück to challenge Merkel because he regarded him as a confident operator with alert political instincts. But he has become increasingly exasperated at Steinbrück's stumbling performance in the campaign.

The candidate, for his part, can't stand Gabriel's constant meddling. "The SPD will only manage to replace the current government and Mrs. Merkel if we stand together," he says. "For that reason, I expect everyone -- including the party chairman -- to constructively and loyally stand behind the candidate and the campaign in the next 100 days."

Every party and every campaign team needs a center of power, which, for the duration of the election campaign, is the party's chancellor candidate. But he is beleaguered, and Gabriel and Steinbrück are merely getting in each other's way, while Steinmeier stands on the sidelines and seems to be asleep at the wheel during the campaign. "The poison is dripping from above and through the entire party," says a member of the party leadership.

There was a near-explosion in the meeting of the SPD parliamentary group last Tuesday. Gabriel could no longer control himself. "Okay, people, let's talk about the election," he fumed, "we're not in campaign mode yet." He proceeded to talk himself into a rage. "You can't wait for us to print nice little booklets. We need to get out and talk to people and knock on doors." It was a first blow against the candidate, and it created unrest in the room. People started heckling him. "Well, it looks like I've hit a sore spot," Gabriel added.

Lothar Binding, a fiscal policy expert, spoke up and criticized the SPD's failed strategy in the drone scandal. There were a few chuckles. "Who exactly is responsible for process control?" he asked. Suddenly no one was laughing anymore. Gabriel had achieved his goal. The debate over Steinbrück's unsuccessful campaign had begun. It was a "turbulent meeting," floor leader Steinmeier later reported.

Gabriel is good at sensing the mood in a room. At last Tuesday's parliamentary group meeting, he noticed how dissatisfied many of the lawmakers were, desperate as they are for a real opposition and clear positions. Based on this intuitive feeling, he hatched the next conflict with the candidate.

The subject was the government's bill on the European banking union. "I can't support it," said budget policy expert Carsten Schneider. Another lawmaker suggested holding a separate vote on the most sensitive issue, a financial injection for the banks from the European Stability Mechanism (ESM). With lawmakers supporting one part of the bill and rejecting another, it would have been a serious defeat for Steinbrück, since he and Steinmeier, despite all criticism, support the government's European policy.

But Gabriel, sensing the critical mood among the members, immediately took up the proposal without expressly supporting it. It was an opportunity to catch his two rivals in the leadership off-guard. Party leftist Heidemarie Wieczorek-Zeul saved the day when she said: "There are situations in which we must support the candidate."

The showdown in the SPD parliamentary group is the most recent sign of how bad the relationship is between the candidate and the party leader. But there have been already been several indications to this effect in past months.

On the Sunday before last, Steinbrück expressed his opposition to walking through flooded villages in a rain jacket, saying: "I'm not going to participate in this rubber-boot competition." But then Gabriel turned up in Magdeburg and was photographed gazing at the rising water levels and looking concerned. Steinbrück hadn't been notified. Gabriel, plagued by a guilty conscience, realized how unfortunate his appearance had been and realized that it was a mistake.

Two weeks ago, Steinbrück gave a keynote speech on foreign policy in Berlin. His tone was restrained and deliberately diplomatic, and he focusing heavily on Europe. On the same day, Gabriel gave an interview to the weekly newspaper Die Zeit. The subject was Europe and the tone was harsh. It robbed Steinbrück's foreign policy speech of all impact.

The list goes on and on. The party leaders were at odds over the Cyprus bailout. Then came the lack of coordination on the five-point program to combat tax flight that Gabriel suddenly presented at the height of the debate over the Uli Hoeness tax evasion case -- without Steinbrück being involved.

The relationship between the two politicians is so tense that they hardly communicate with each other at all anymore. One reason is that Gabriel is often absent at important meetings, although no one knows exactly why. Is it because he prefers to be with his family in Goslar? Or because he can no longer abide the misery at the SPD's head office in general, and Steinbrück and Steinmeier in particular?

The closed-door, 9 a.m. Monday meeting of top party leaders recently took place without Gabriel -- again. He also failed to turn up recently at a meeting of SPD regional governors, headed by North Rhine-Westphalia Governor Hannelore Kraft, to agree their course in the Bundesrat, the upper house of parliament that represents the regional states. Gabriel also no longer regularly attends meetings of the political campaign leadership at party headquarters.

The resentment and incomprehension within the party isn't just directed at Gabriel. Steinbrück is also under fire, even if no one is willing to openly oppose the candidate. But his fellow Social Democrats can see that time is trickling away and their chances of gaining power in September are evaporating.

"(Former Chancellor Gerhard) Schröder liked to hog the limelight," says a senior SPD official, "and he was an uninhibited campaigner." By contrast, he adds, Steinbrück made it clear from the start that he would challenge Merkel on policy issues rather than launching frontal attacks against her. But what if the chancellor refuses to accept the challenge, because she is shamelessly copying Social Democratic policy?

It's a criticism that Gabriel shares. It troubles him that Steinbrück is apparently incapable of attack, and that he hesitates, wavers and bided his time instead. But the chancellor is better at biding her time than he is. Steinbrück decided early on not to attack Merkel personally, and he intends to stick to his self-imposed restrictions -- even if it exasperates his fellow party members and, most of all, the SPD chairman.

There have also been numerous organizational problems, last Monday, for example, when the candidate wanted to present the last members of his shadow cabinet. But then he was forced to announce that he had just fired his spokesman Michael Donnermeyer, and no mention was made of the three new members.

In desperation, Steinbrück is now trying to recast his public image and appear warmer and more approachable. He wants the campaign to focus more heavily on his wife Gertrud, and he plans intends to given an interview to the weekly Berlin-based magazine SUPERIllu, which has a strong readership in eastern Germany. At a party convention in Berlin on Sunday, he even came close to tears when his wife, on the stage with him, described how upsetting it is to see her husband constantly being picked on in the media.

But the carefully planned presentation of this new, softer side of Steinbrück will hardly work if the party leadership continues to rip itself apart. And there are no signs that these conditions are likely to improve.

In last week's meeting of the national party leadership, Gabriel brought up another issue that is unlikely to please the candidate. Gabriel favors the center-right Christian Democratic Union (CDU) model of a pension for mothers, and he said that he thought it might be a good idea. He also noted that it was an issue over which the conservatives had regularly contradicted themselves recently.

"If Angela Merkel and the CDU/CSU are serious about this, they should submit a bill on the mothers' pension in the Bundestag before the election," says Gabriel. "We certainly won't vote against it."

Steinbrück had also commented on the issue a few weeks ago, and for once he had stated his position clearly. Although he thought the pension was a nice idea, he said, it was "not financially feasible." 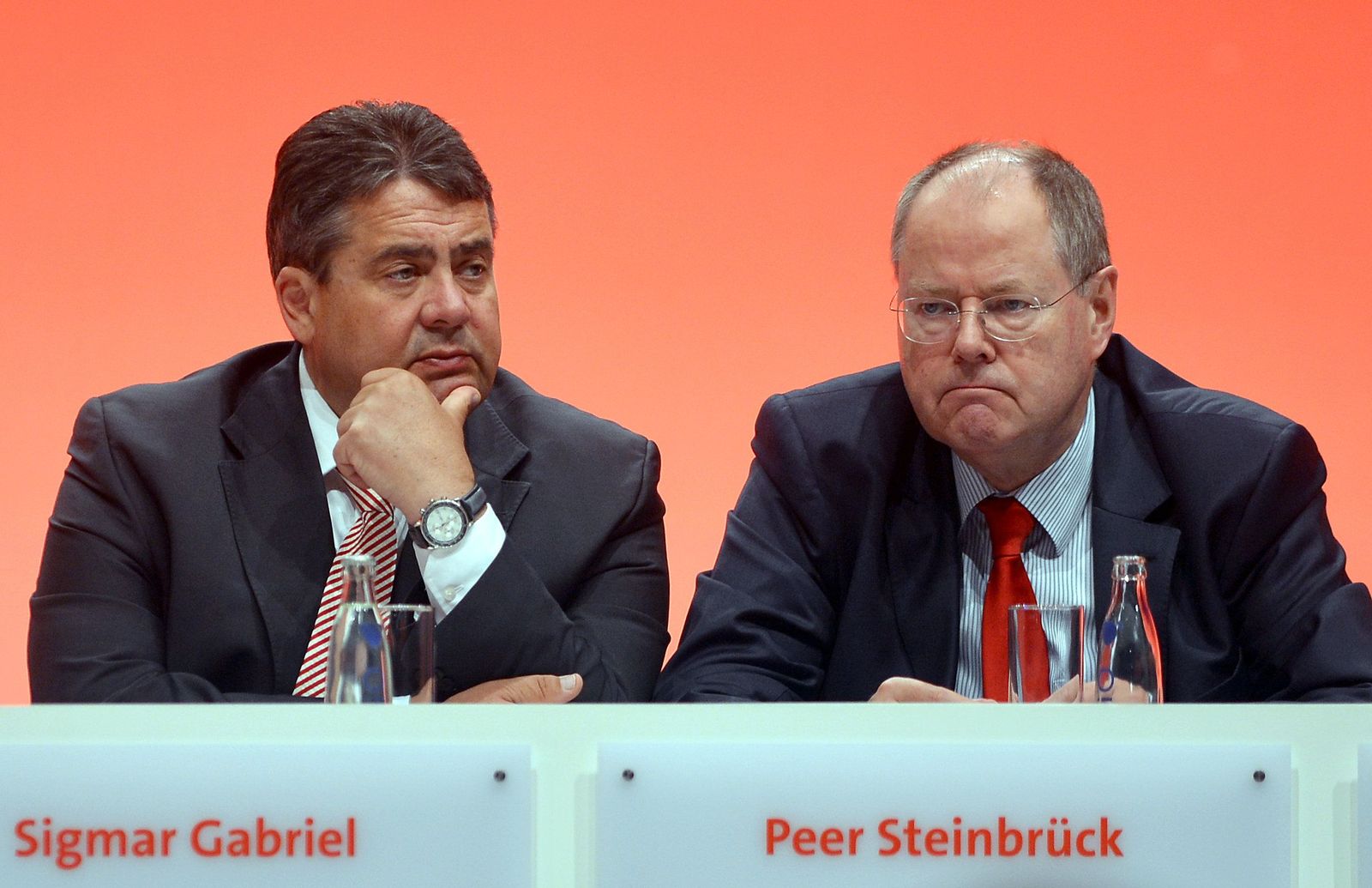