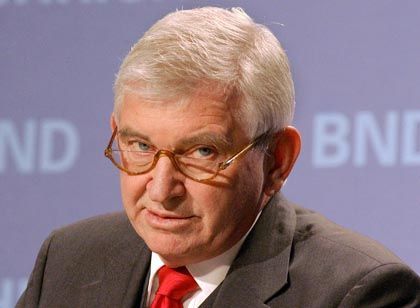 BND chief Ernst Uhrlau says he first became aware that his agency was spying on an Afghan politician and a SPIEGEL journalist in December 2007, long after the operation had stopped.

Earlier Thursday, it looked as though Ernst Uhrlau, the head of Germany's foreign intelligence service, might lose his job. Urhlau came under fire this week after it was revealed his agency had been monitoring e-mails exchanged between an Afghan government minister and a SPIEGEL journalist.

A number of new details are emerging that suggest the head of the Bundesnachrichtendienst (BND) lost control over some of the agents in his organization and failed to inform the Chancellery of Chancellor Angela Merkel or parliament in a timely manner about what he knew. The Chancellery is officially responsible for supervising the foreign intelligence agency's activities.

But after a meeting of the German parliament's intelligence oversight committee Thursday, the panel's chairman, Thomas Oppermann of the center-left Social Democratic Party, said Uhrlau could keep his post.

After a two-hour period of questioning, he said it was clear there would be consequences for BND personnel and that new structures would be put in place on the level of department heads and staff units. He said the relationship between the intelligence oversight committee and the BND had been damaged and that it had to be re-established. Oppermann also said these changes should be managed by Uhrlau, who is already working to correct other legacy problems at the foreign intelligence agency.

Other politicians on Thursday, led by Hans-Peter Uhl of the conservative Bavarian party the Christian Social Union, had been calling for Uhrlau to step down. But during the oversight committee's meeting, the senior Left Party member on the panel, Wolfgang Neskovic, said his resignation wouldn't change anything. But the senior committee member from the business-friendly Free Democratic Party, Max Stadler, described the espionage case as evidence that the BND was turning into a state within a state. Stadler called for an increase in parliament's power over the BND's work. Speaking for the Greens, panel member Hans-Christian Ströbele concurred.

Spying on a SPIEGEL Journalist

Earlier Thursday, new information emerged about the incident first revealed last Friday that sparked this week's Bundestag hearings. For months, the BND monitored e-mails exchanged between SPIEGEL correspondent Susanne Koelbl and an Afghan minister during 2006. It has since emerged that Koelbl was not the BND's original target. The intelligence service was attempting to install a so-called "Trojan horse" computer program on the computer of Afghan Trade and Industry Minister Amin Farhang that would send copies of his e-mail to the BND. The agency had hoped to obtain information about Farhang. In its surveillance, the agency also came across e-mails exchanged between the reporter and the minister.

At first, it was unclear why the BND wanted to monitor the Afghan minister, who also holds a German passport and lived in the western German state of North Rhine-Westphalia for years.

The incident is also expected to raise new questions for the BND -- especially why the German foreign intelligence agency would spy on a minister of a foreign government. After all, Afghanistan is recognized by Germany as a sovereign state.

In its previous reporting, SPIEGEL did not name Farhang because it had sought to protect him as a source for the magazine. But after his name began circulating amongst politicians in Berlin on Thursday, SPIEGEL obtained permission from Farhang to publish his name.

SPIEGEL also announced on Thursday it would consider bringing a lawsuit against the BND over its actions. "Over a period of six months," the intelligence service "monitored e-mail between Susanne Koelbl and an Afghan politician." This is an "unacceptable situation," the newsmagazine stated.

The situation isn't getting any easier for Uhrlau, who must now answer questions about how he, as head of the service, could be kept in the dark about such a sensitive operation undertaken by his own people. During a hearing in the Bundestag on Wednesday, Uhrlau said that he was first made aware on Dec. 21, 2007 that his agency had been monitoring e-mails between Koelbl and Farhang. 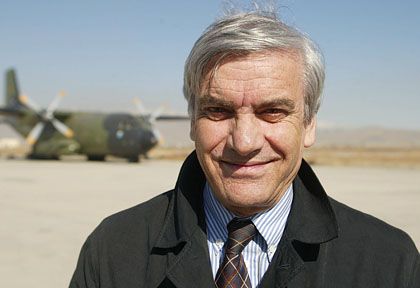 Afghan Trade and Industry Minister Amin Farhang was the target of German espionage for six months.

So far, it is clear that in the summer of 2006, one BND sub-unit made the decision, without consulting with senior management, to place a tap on the computer of a member of the Afghan government. The operation included the installation of software on the politician's computer that monitored all of his communication and sent copies to the BND.

The monitoring continued for a good six months, and BND employees first expressed their unease about the operation in November 2006. Shortly thereafter, the monitoring stopped.

Uhrlau reportedly first learned of the operation in December 2007. Two months later, an anonymous letter began circulating in Berlin that provided details of the BND operation. The letter is believed to have originated from a BND employee who disapproved of the operation.

The question also remains unanswered why the intelligence issues committee of the German parliament, the Bundestag, was informed so late by Uhrlau -- and why officials didn't tell SPIEGEL until last Friday that Susanne Koelbl's emails had been monitored.

Koelbl has reported on war-ravaged Afghanistan for SPIEGEL for a number of years.