For Andreas Schmitz von Hülst, the president of the Rhineland Regional Tax Office, it was relatively easy to track down tax evaders until recently. All he had to do was wait for letters from people turning themselves in. Repentant citizens contacted him almost daily to confess their offenses. The exposure of offshore accounts in Liechtenstein and Switzerland, in particular, had given tax evaders such a scare that many rushed to ease their conscience, thereby avoiding even stiffer penalties.

But the flood of voluntary declarations has dwindled to a trickle recently. Instead of first hearing the confessions of repentant tax evaders and then collecting their money, tax investigators are back to doing painstaking detective work, a circumstance that tax official Schmitz von Hülst attributes to the German government's current policies. Many tax evaders, he says, have coolly calculated that it's worth their while to see what happens in the next few weeks. Why confess when there is a growing chance that their problems could resolve themselves in the near future?

At issue is an amnesty for tax evaders, the final details of which German Finance Minister Wolfgang Schäuble, a member of the center-right Christian Democratic Union (CDU), and his Swiss counterpart, Eveline Widmer-Schlumpf, ironed out before the Easter holidays.

One Part of a Larger Treaty

Under the plan, German holders of offshore accounts in Switzerland are able to absolve themselves of all guilt by making a moderate partial payment. The Swiss bank issues its customer a confirmation and transfers the funds to the German treasury, and the tax evader remains anonymous. And should he ever receive a visit from German tax investigators in the future, all he has to do is present the confirmation from his bank -- and he's off the hook.

The German government is justifying the deal, which Finance Minister Schäuble calls a pragmatic solution. From his perspective, the sale of indulgences is merely an insignificant portion of an extensive and fundamentally advantageous treaty with Switzerland, which will both make tax evasion more difficult and increase the German government's revenues by many billions in the future.

"We have a solution for the future that will treat the deposits of German taxpayers in Swiss banks in exactly the same way they would be treated in German banks," says Schäuble. It's a bold claim.

Critics like Social Democratic Party (SPD) Chairman Sigmar Gabriel see the tax plan as a "slap in the face of honest citizens." And indeed, it seems inconsistent that the German tax authorities sometimes check every receipt a taxpayer claims as a deduction and impose fines for even the smallest mistakes, and yet will soon be taking a more lenient approach to millionaires who have illegally parked their riches in Switzerland.

The government's political credibility is on the line. Chancellor Angela Merkel is determined to avoid a fairness debate. And her coalition partner, the business-friendly Free Democratic Party (FDP), which faced a PR disaster after the hotel tax was lowered from 19 to 7 percent, is being careful not to be seen as the party for high earners.

But the questionable agreement with Switzerland is upsetting many voters. The CDU, its Bavarian sister party, the Christian Social Union (CSU), and the FDP rarely mention tax cuts for people with average incomes anymore. Everyone is promoting austerity, and the number of sanctions imposed against dishonest recipients of the so-called "Hartz IV" welfare benefits has just reached record levels.

A 'Godsend' for Offshore Accountholders

At the same time, however, the officially sanctioned money laundering that is set to take place in Zürich's banking district will benefit those who are not only affluent, but were also sufficiently unscrupulous to have secretly moved their potential contributions to the country's finances abroad.

"For those who have moved their illicit funds to an offshore account in Switzerland, the treaty is a godsend," says Berlin tax law expert Martin Wulf. His colleague Alexandra Mack, from Cologne, says that if the treaty goes into effect, "Easter and Christmas will come on the same day" for major tax evaders. And Thomas Eigenthaler, chairman of the German Tax Union, says that the agreement would essentially whitewash the crime of tax evasion.

Norbert Walter-Borjans (SPD), the finance minister of the western state of North Rhine-Westphalia, is also critical of the plan. His opinion of Finance Minister Schäuble is as poor as it is of Switzerland at the moment. And the recent Swiss decision to issue arrest warrants against three tax investigators from North Rhine-Westphalia for the purchase of CDs with information about tax evaders only makes him more resentful.

The tax treaty with Switzerland could bring hundreds of millions of euros to his state's tax coffers. But Walter-Borjans still rejects the plan, especially after having noticed during his appearances in the state election campaign that his position is popular with voters. He is now urging his counterparts in other states to vote against the project in the Bundesrat, the legislative body that represents the German states.

Walter-Borjans has had his experts in the state finance ministry calculate the extent to which the planned amnesty would financially benefit the holders of offshore accounts. "The larger the amount of tax someone has avoided paying, the more he benefits from the arrangement," Walter-Borjans says. "This is unacceptable."

This is how the results of their analysis would apply to a hypothetical case: Someone who illegally moved €1.2 million in untaxed assets to Switzerland 10 years ago and, thanks to compound interest, now has more than €1.6 million in his account, would only have to pay 21 percent under the tax agreement to whitewash his money. In other words, he would come away from the deal with more than €300,000 in capital gains left over. All of his obligations to the German treasury would have been satisfied -- and at a bargain rate. If the income had been properly declared and taxed in Germany, his tax liability would have amounted to €770,000, or more than twice as much.

This explains why so few voluntary declarations are turning up at tax offices at the moment. In the above example, a tax evader who turns himself in would not only have to pay the €770,000 in back taxes, but would also have to pay back the compound interest on the amount. In the end, according to the Finance Ministry's calculations, his obligations would quickly add up to €1.2 million, or more than three times the amount he would be required to pay under the tax amnesty.

The hypothetical scenarios outlined by the state finance ministry in North Rhine-Westphalia also show that most holders of offshore accounts would be taxed at the lower rate provided under the tax agreement Schäuble negotiated with the Swiss. Officially, the applicable tax rates would range from 21 to 41 percent. A complicated formula is used to calculate the rate that would apply to each individual case. Under the plan, the rate increases with the volume and frequency of tax evasion.

The finance minister in North Rhine-Westphalia calls this "purely cosmetic." Experts have calculated that holders of offshore accounts would only be required to pay the new maximum rate if their assets had grown more than a hundredfold within 10 years -- a theoretical scenario which, according to Walter-Borjans, is hardly realistic, "even with optimal investment of assets." He believes that about 80 percent of tax evaders will get away with paying the minimum rate, irrespective of whether they evaded paying taxes on €100,000 or on millions.

This is why Wolfgang Joecks, an expert on tax law in the northeastern German city of Greifswald, believes that the planned treaty is unconstitutional. According to Joecks, the agreement would unfairly improve the financial situation of tax evaders, compared to that of honest taxpayers.

In principle, it may be possible to grant repentant tax evaders immunity from prosecution and a tax allowance, Joecks says. But, in 1991, he points out, the Federal Constitutional Court imposed a condition on those hoping to receive amnesty, namely that the "taxpayer must step out of the anonymity of the tax evader."

The agreement with Switzerland specifically does not require the relinquishment of anonymity, says Joecks. And because a tax evader would not be required to reveal his identity, Joecks explains, there is "every reason to believe" that the planned arrangement is unconstitutional. Theoretically, any taxpayer could take the matter to the German Constitutional Court in the southwestern city of Karlsruhe, arguing that the treaty with Switzerland amounts to discriminatory treatment against ordinary taxpayers.

Need for a Tax Treaty

Nevertheless, even most critics feel that a tax treaty with Switzerland makes sense, especially given the large amounts of money involved. Tax experts speculate that German nationals have deposited between €130 billion and €180 billion in Swiss bank accounts. In light of these estimates, they are all the more outraged that, under the current Schäuble plan, Swiss banks would only have to transfer about €1.7 billion to the German treasury as a partial payment.

"Germany allowed itself to be taken to the cleaners in the negotiations," says German Tax Union Chairman Eigenthaler.

Eigenthaler, a tax officer himself, had come up with his own ideas on what an acceptable agreement with Switzerland could look like. First, the lump sum taxation of the undeclared assets of all the tax evaders involved would have to be based on the highest German tax bracket, which, including the solidarity surcharge on income tax, is about 45 percent.

"Those who choose to remain anonymous have to pay the piper," says Eigenthaler. "And anyone who believes he would be better off submitting a voluntary declaration can turn himself in to the German authorities."

Eigenthaler's second proposal is to move up the cutoff date for calculating the assets stashed away in offshore accounts. Under the current Schäuble plan, the cutoff date is Jan. 1, 2013, which is preposterous, says Eigenthaler. "It can't be that tax evaders are going to be given until the end of the year to move their money elsewhere," he says.

The best solution to the problem would be to prohibit Germans from investing their money anonymously in Switzerland in the first place. This would require the type of automatic exchange of information that is customary between most European Union countries. But the elimination of banking secrecy is not negotiable for Switzerland -- not yet, at least.

This is why it would be all the more painful for tax investigators if the agreement with Switzerland came into effect in its current form. They fear that it will become even more difficult in the future to expose offshore accounts in Switzerland, making the discovery of tax evaders more unlikely. Under the new treaty, German authorities will no longer be permitted to actively pursue the purchase of data CDs.

The agreement also limits the number of inquiries local German tax offices can submit to the Swiss tax administration about the accounts of German citizens to only 1,300 over two years. That would be about one inquiry per tax office -- per year. 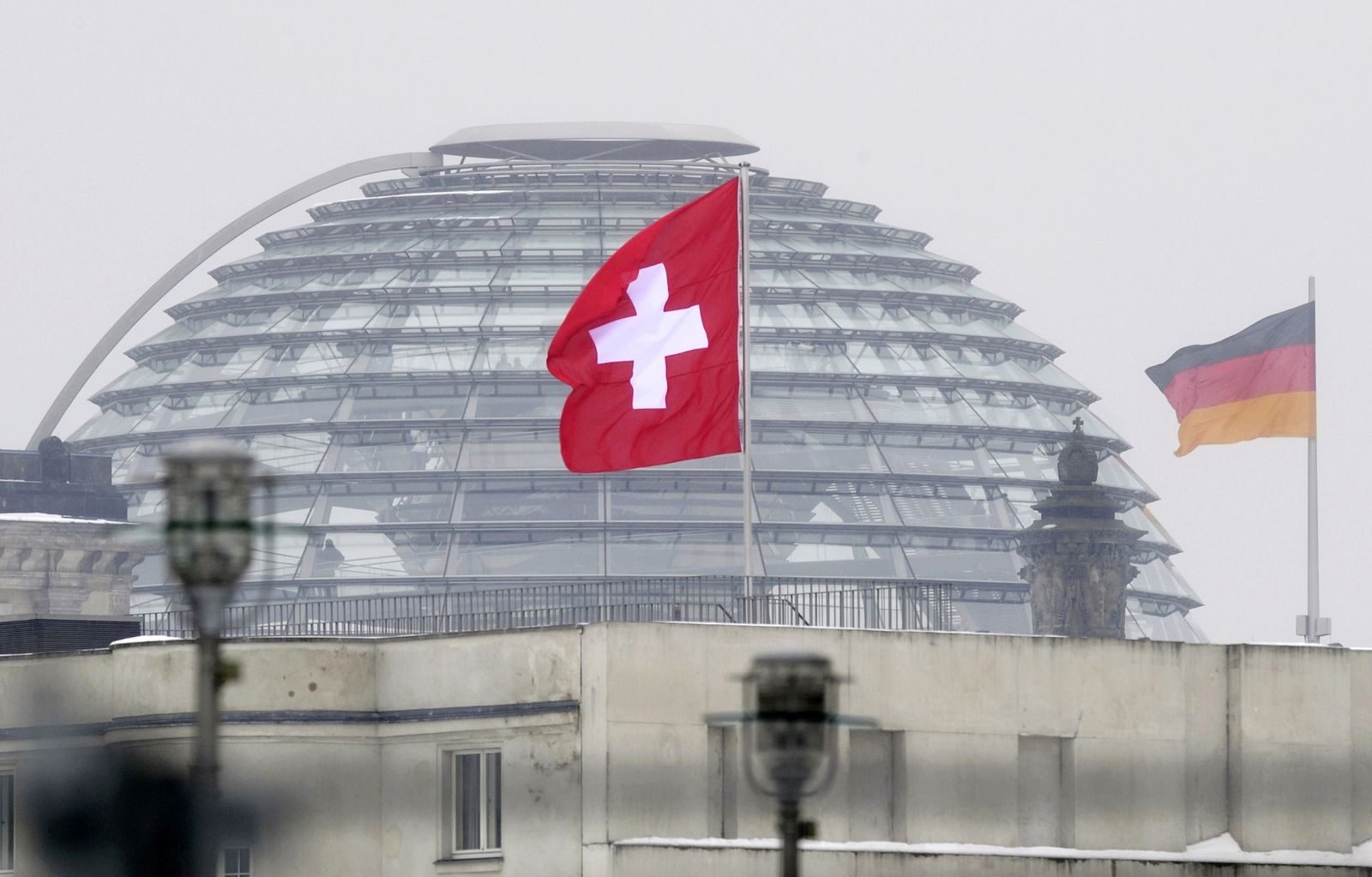 The rooftop of the Swiss Embassy in Berlin with the Reichstag in the background.