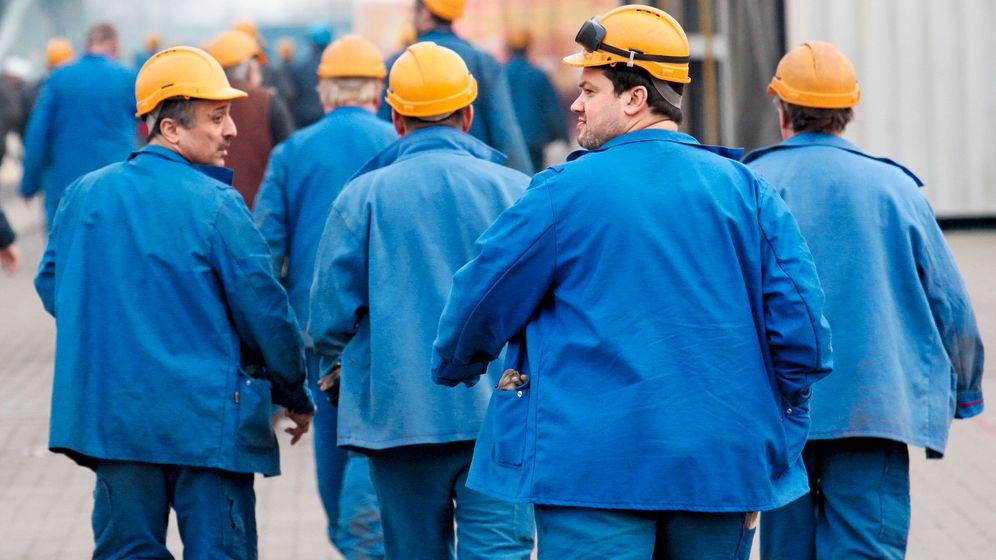 Frank Bsirske, the head of the Ver.di service workers' union, gets annoyed when he hears people say that Germany is doing pretty well. "That only applies to the well-off," he says angrily. "The gap between rich and poor has never been this wide, and never has the middle class felt this threatened." The union leader is even worried that social conflict could escalate.

His recipe against the erosion of society is hardly surprising: Wages have to go up, and by a significant amount, at that. In the current collective bargaining round, Ver.di is calling for a 6.5-percent pay increase -- the highest in years -- for German public sector employees.

Bsirske has the support of other unions with his demand for a substantial pay hike. After metalworkers' union IG Metall fought for improvements in the treatment of temporary workers and more assistance for trainees in the last bargaining round, the union's main focus in the new round beginning in May will be on money. "Our demand will focus on a decent pay increase," says IG Metall regional director Meinhard Geiken. Michael Sommer, head of the German Federation of Trade Unions (DGB), is convinced that "the people who keep the country running and generate its wealth deserve to get their fair share."

Although it sounds like union ritual, the labor organizations are getting more support than they have in a long time. For more than a decade, it was considered reasonable in Germany to keep wage increases moderate at best, in light of high unemployment. But now the country is getting used to a new logic, namely that Germany, more than any other European economy, can afford pay increases.

The German economy got through the euro crisis in much better shape than almost all of its neighbors. Employment, at more than 41 million, is at the highest level ever recorded, and many companies have recently reported record profits.

Nevertheless, most employees have less disposable income, when adjusted for inflation, than they did 10 years ago. "The working world has to be reorganized in 2013," says Stefan Körzell, the DGB chairman for the two states of Hesse and Thuringia. "We cannot allow more and more people to be poor despite being employed."

Politicians are also embracing the issue. With collective pay agreements for about 12.5 million employees expiring this year, it's no surprise that the opposition center-left Social Democratic Party (SPD) wants to make them a campaign topic ahead of the general election this autumn. "Employees have exercised wage restraint for more than a decade," says Thorsten Schäfer-Gümbel, the SPD chairman in the western state of Hesse. "It's high time that workers get to participate in the success of the economy."

Essentially, this means that in times of the euro crisis, Germany's collective bargaining negotiations have a different meaning than during the deutschmark era. Many economists agree. When employers and union officials in Germany sit down to hammer out their wage deals, they have to look beyond the economic situation in Germany and think of growth and employment in the entire euro zone.

"It should certainly amount to a 5-percent increase across all German industries," says Peter Bofinger, a member of the German Council of Economic Experts which advises the government. He isn't overly troubled by the fact that this is more than twice as much as the level his fellow Council member Wolfgang Franz believes is reasonable. Bofinger has also argued consistently for higher wage agreements in the past. But now he has a new argument. His current hefty demand includes a 2-percent supplement to save the euro.

"During wage negotiations, we can no longer act as if we were living on an island," he says. For this reason, Bofinger believes that a significantly higher increase is necessary, in addition to the 3-percent increase that he argues results from growth in productivity and inflation.

German workers as the saviors of the Spanish economy? Yes, indeed, says Bofinger. He too believes that the Southern European countries will not be able to avoid wage cuts. But the Germans, Bofinger argues, could soften the necessary adjustment process with a substantial wage increase.

Bofinger makes a case for income increases in many areas. Pensions need to go up, he says, as do long-term jobless benefits, even if this will drive up inflation at first. And because he knows that many politicians shudder at this idea, he says: "We have a choice between two ugly alternatives: either a temporarily higher inflation rate in Germany or deflation in Southern Europe."

It's true that Germany's past wage restraint is part of Europe's current problem. Wages have increased sharply in Southern Europe since the launch of the single currency. As a result, countries like France, Spain and Italy are now far too expensive. To become more competitive and reduce trade deficits with Germany, salaries have to be reduced substantially. This is unavoidable, but the decreases in Southern Europe could be somewhat smaller if they coincided with a larger increase in German wages.

Of course, German employers don't like to hear these arguments. Peer-Michael Dick, for example, the current managing director of the Gesamtmetall Engineering Employers' Federation, notes that there are "noticeable skid marks" in the economy and sees "a worse situation than last year." Most of all, he doesn't support the idea of wage hikes to show solidarity with the rest of Europe. "It makes no sense at all economically, the notion that we have to pay higher wages so that Southern Europe can get back on its feet."

Many economists disagree. In the postwar years, the deutschmark repeatedly appreciated against Southern European currencies, and German industry was more productive. This also benefited employees, because their higher wages enabled them to buy more foreign goods and made foreign travel cheaper for them.

But this effect has disappeared since exchange rates were fixed with the introduction of the single currency. There has been no currency appreciation since then, and the greater competitiveness of German companies is reflected solely in higher exports and greater profits. This also applies to trade with customers outside Europe.

German producers do their accounting in euros, which is why they profit from the fact that the currency is relatively undervalued at the moment because of the debt crisis. Experts estimate that if the deutsche mark still existed, German cars and machines would probably be 15 to 20 percent more expensive than they are now. Economists with Citigroup assume that Germany's annual exports have been about €100 billion higher for this reason alone.

Even economists who are sympathetic to the employers' stance concede that the framework for wage policy has changed since the introduction of the euro. "If we still had the deutschmark, we could hardly afford wage increases, in light of the massive appreciation of our currency," says Michael Hüther, head of the Cologne Institute for Economic Research.

Because the euro exists, even Hüther believes that there is room for higher wages, albeit much less than fellow economist Bofinger. Hüther feels that wage increases of up to 3 percent are certainly feasible in the upcoming bargaining round, although he does not believe that this will produce a significant increase in jobs. "And despite all the euphoria, we mustn't forget that there are still 2.9 million unemployed people in Germany."

Germany's union officials don't seem to be overly worried about this at the moment. Instead, they are gearing up for big pay demands. One of them is Onno Dannenberg, public sector wage policy manager at Ver.di. He will attend the first negotiations for state government employees on Jan. 31, and two additional rounds are planned for February and March. In light of the economic situation in Europe, says Dannenberg, it is "all the more important that we strengthen domestic demand."