It's not the content that was decisive. That was true back then just as it is today. Back then, in 1962, our SPIEGEL predecessors put together an important investigative report, but it was also awkwardly written. And it certainly wasn't treasonous. It nevertheless went on to become the most famous story SPIEGEL has ever published. The 8,000-word, 16-page cover story begins: "The chancellor left his capital of Bonn. Just like the Führer at the beginning of the Battle of France in the early morning of June 10, 1940, he reported to a control bunker in the Eifel."

The piece focused on a NATO exercise called Fallex 62, which demonstrated, according to the story, that in the event of war, Germany's food supply system would collapse just as rapidly as its medical services. Furthermore, up to 15 million West Germans wouldn't survive a nuclear war. Germany has only a "limited ability to defend itself," was NATO's conclusion, as quoted by the SPIEGEL story.

Initially, the magazine's editors were not particularly proud of the piece. SPIEGEL Editor-in-Chief Rudolf Augstein waved the magazine in the air in the conference room and asked: "Did anyone read this?" The story's author Conrad Ahlers said: "It's a tedious read. Only digestible for especially interested readers."

German authorities, however, were among those interested readers. And SPIEGEL quickly found itself on the business end of a treason investigation -- an investigation that rapidly became the biggest political scandal in Germany's short, post-World War II history. It is known as the SPIEGEL Affair.

From Tragedy to Farce

When Augstein was jailed -- for fully 103 days -- he wasn't quite the fearless leader that the SPIEGEL newsroom may have hoped for. He told investigators, that he actually hadn't even read the story. But when he got out, he showed no fear in going after those politically responsible for the investigation. In the end, Defense Minister Franz Josef Strauss, who triggered the proceedings against SPIEGEL, lost his job.

History, Karl Marx wrote, repeats itself, "first as tragedy, then as farce." This time around, it was the turn of the blog Netzpolitik.org. They wrote that the Federal Office for the Protection of the Constitution (BfV), Germany's domestic intelligence agency, had established a new unit to perform widespread monitoring of Internet content such as contact lists or Facebook connections. The men behind the blog, Andre Meister and Markus Beckedahl, are as bold as they are knowledgeable and their work is well-reported, their offerings well-chosen and their commentaries well-written. But they also don't have an inflated view of where they stand in the world of journalism, which is why they didn't feel the BfV story was particularly dangerous. After all, the plans it referred to weren't particularly new and were already being openly discussed in Berlin.

But as absurd as it may sound, it was enough to trigger a treason investigation, just like in 1962. Hans-Georg Maassen, head of the BfV, filed a complaint with Chief Federal Prosecutor Harald Range, who then launched an investigation into Meister, Beckedahl and "persons unknown," a clear indication that authorities are intent on finding the journalists' source.

Back in 1962, Dieter Wild was a 31-year-old editor on SPIEGEL's national desk, earning 1,500 deutsche marks per month. In the 1990s, he would become the magazine's deputy editor in chief. Wild says that the German authorities set out to destroy SPIEGEL back in 1962. "It was a war-like occupation," he says of the police raid on the magazine's editorial offices. "The whole street in Hamburg was full of police cars." Chief Federal Prosecutor Siegfried Buback stood in the newsroom, Wild explains, and read the galleys. "It was an act of censorship," Wild says, adding that the magazine staff "was seriously concerned."

The situation today is different. The idiotic investigation has to be, and will be, discontinued. And the people at Netzpolitik.de are no longer particularly worried.

Still, the two incidents have some elements in common. Then as now, informants are to be hunted down -- that is apparently more important to governments and their officials than protecting press freedoms. And something is wrong with a political system when an intelligence service and the judiciary join forces against the media. And when state and federal prosecutors can be instrumentalized for political interests. There is something wrong when a defense minister (back then) or a BfV head (today) can take advantage of the judiciary. At the very least, we need a strong justice minister who is independent from the other members of cabinet. But we also need a debate about the freedom of the judiciary and freedom of the press in the present day.

Such a debate is necessary because, just like in 1962, we find ourselves in a period when our political leaders are anxious and uncertain in the face of change. In 1962, Germany's political leadership and its military had authority, men decided if their wives would work or not and the enemy was in the East. But SPIEGEL was different, intent on asking uncomfortable questions and criticizing those in power. Strauss hated SPIEGEL and he hated Augstein. "The pigs, we finally got them," he said, after Spanish police, at Strauss' behest, arrested Conrad Ahlers, who was vacationing in Spain. German Chancellor Konrad Adenauer believed that SPIEGEL was an "abyss of treason." Both sensed that something new and threateningly free was spreading throughout the republic. "1968 began in 1962," says Franziska Augstein, Rudolf Augstein's daughter.

Today, the German government knows that it has become involved in an affair of which it was originally a victim. It knows that it is unable to protect its own citizens from (nominally) allied intelligence services. The German government doesn't have the courage -- still doesn't have the courage -- to stand up to the NSA and the USA. It doesn't acknowledge any mistakes, it explains nothing, it keeps silent and doesn't govern. Chancellor Angela Merkel probably knew nothing about the attack on Netzpolitik.org. But the incident fits well with her term: Never go after the big fish like NSA, always go after the small ones like Netzpolitik.org instead.

But how can the new uncertainty be dealt with? One possible answer is that of welcoming change as an adventure. Strauss was unable to do so. And it is astounding that, 53 years later, the current government and its agencies are unable to do so either. Indeed, both scandals were the result of blatant anger and a desire for revenge on the behalf of an insecure old man: That is the pitiful element that binds the two affairs together. 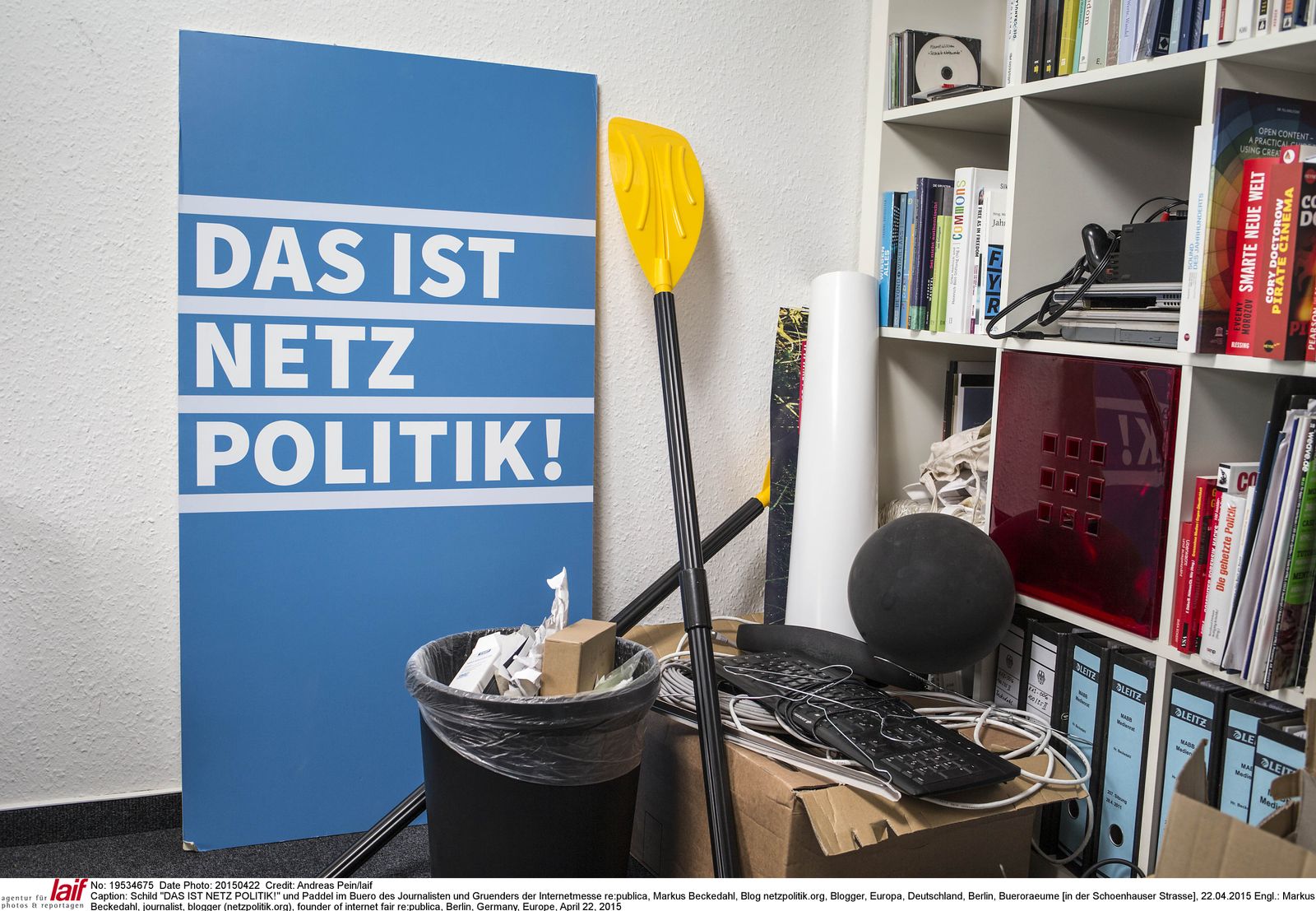 Netzpolitik.org was investigated for treason, but the case speaks volumes about uncertainties in the German government.