The professor was lecturing about "basic lessons of civil law" for freshman students at Bochum University when a group of left-wing "Antifa" (anti-fascist) activists dressed as Santa Clauses burst into the hall. They ran up to a male student and pointed at him.

Few in the room knew the man, who had close-cropped hair and chubby cheeks. But Michael Brück, 23, is well-known in far-right circles. He was a member of the neo-Nazi group National Resistance Dortmund until it was banned a year and a half ago. Their members terrorized people who opposed them, held parties celebrating Adolf Hitler and attacked immigrants and police officers with knives and pepper spray. Brück is deputy regional chairman of the extremist party Die Rechte, or The Right.

The lecturer shouted "Get out! Out!" The activists yelled: "Your classmate is a neo-Nazi!" Then the professor walked up to them, grabbed a Santa Claus by the arm and pushed him towards the door. There was pushing and shoving. Borges said later that he had been attacked and beaten by masked people. But a mobile phone video taken of the incident doesn't confirm that the activists initiated the scuffle. "I couldn't accept action being taken against one of my students," said Borges. He resumed the lecture with a bloody nose.

The Antifa operation in Bochum raises a question that many universities and colleges in Germany are grappling with. How should universities respond when right-wing extremists study on campuses? And how should one react if they are publicly exposed?

Last November, left-wing activists at the University of Hanover unmasked a female student as a high-ranking member of the far-right National Democratic Party (NPD). The university's political science institute condemned the Antifa's behavior as a "denunciatory form of protest." And Marian Döhler, the director of the institute, said: "We teach independently of political opinion, religious affiliation or other traits." The NPD student posted a message on Facebook saying the action was "the best advertisement for the party."

Other universities react differently. The University of Potsdam tried to stop a student from counting his stint at the NPD as one of his mandatory work experience internships. The student took legal action against that decision and won.

Student bodies also react differently. In Leipzig and Bielefeld, neo-Nazis were exposed in lecture halls. But in Trier and Cologne, right-wing extremists were voted on to student committees. Neo-Nazis often study law so that they can represent their comrades as lawyers later on. Women, says Marc Brandstetter of the Endstation Rechts anti-Nazi group, often study for teaching jobs -- possibly to be able to pass on their Nazi ideology to children.

But that's no reason to bar them from universities. Bochum University rector Elmar Weiler criticized "right-wing extremist thinking" after the incident in the lecture hall but said the law student shouldn't have been denounced. Professor Borges said no one who meets the formal university requirements should be deprived of their right to study. He added that if he meets Brück, he will give him "urgent advice" to rethink his ideology.

The law faculty's student representative board issued a statement condemning "discrimination based on party political involvement," but later stressed that there was no room for far-right ideology among students. The board declined to answer further questions, saying any additional debate would "damage the faculty's reputation."

But does silence solve the problem? Andreas Zick, head of the Bielefeld Institute of Conflict Research, said universities need to deal with the problem more forcefully. "We can't exmatriculate but we can clearly express our position," said Zick.

At the start of the winter term, Bielefeld University distributed badges and postcards to first-year students with the slogan "Uni Ohne Nazis" ("University without Nazis"). Zick organized a lecture on the issue and invited anti-racism coaches as well as one of the lawyers representing the relatives of the victims of the NSU neo-Nazi terror cell. "We can't leave it just up to the Antifa to deal with this," said Zick.

Outing far-right students is even controversial among anti-Fascist groups. The method is akin to the behavior of neo-Nazis who target people who disagree with them, said one Berlin-based activist.

After the scuffle at Bochum University, the ire of most students on the university's Facebook page was directed against the Antifa -- and not against neo-Nazi Brück. 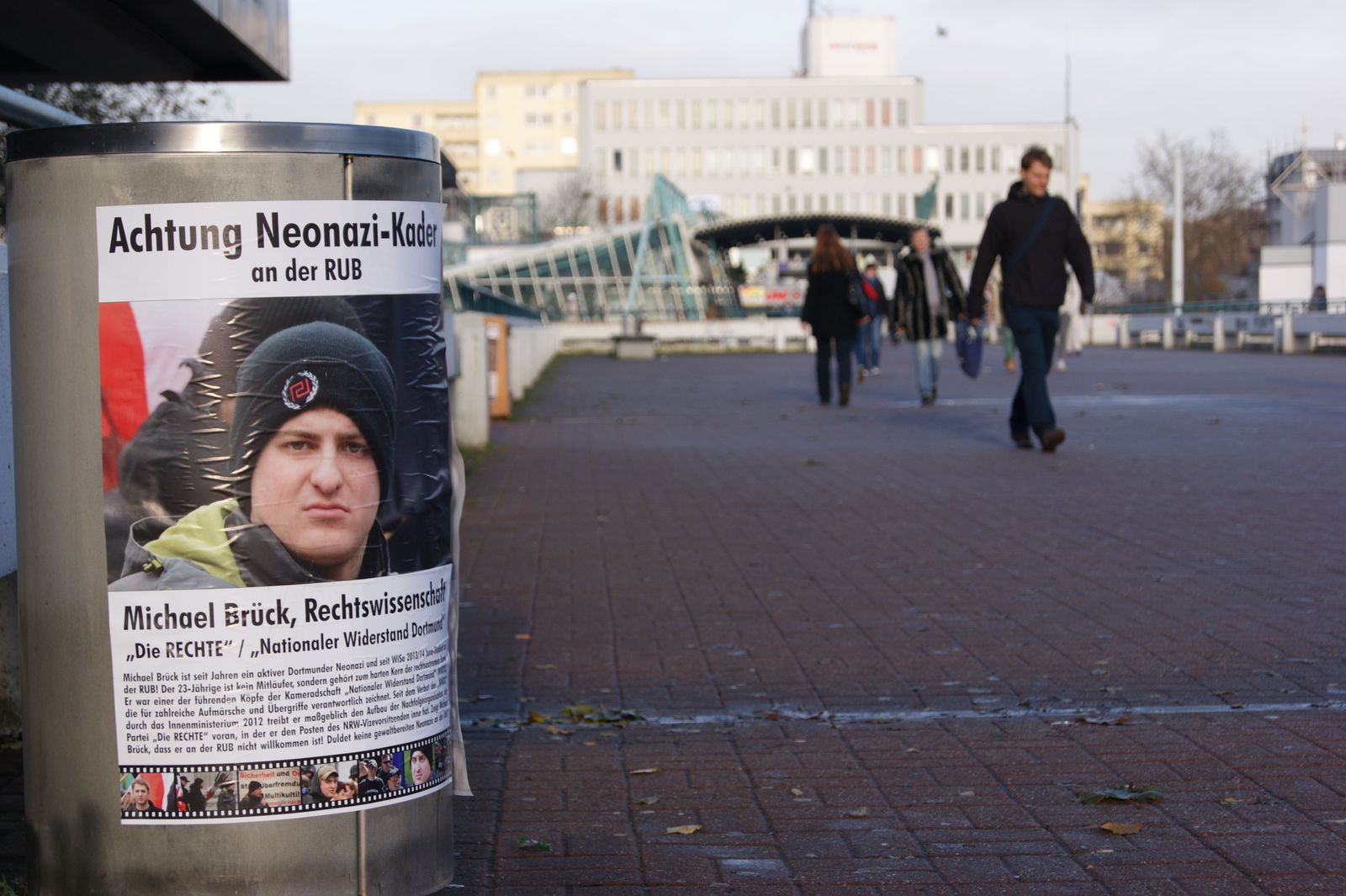 An anti-Nazi poster at Germany's University of Bochum