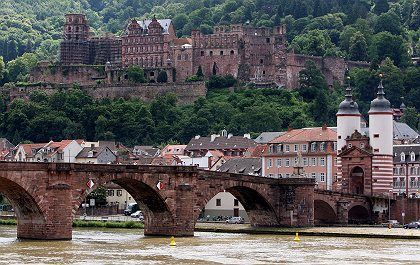 Heidelberg may be pretty, but in the eyes of UNESCO the university city is apparently not pretty enough.

It may be picturesque, nestled in a forest with a pretty old town, bridge and castle, but the German university city of Heidelberg apparently doesn't quite cut the mustard in the eyes of the United Nations Educational, Scientific and Cultural Organization -- it has been left out of the UNESCO list of special world sites for preservation, for the second time.

The organization's World Heritage Committee is currently meeting in Auckland, New Zealand and has already added 22 new natural and cultural sites to its list over the past week.

Heidelberg, a pretty university town near the Rhine and one of Germany's top tourist destinations, had already applied for World Heritage status two years ago. The committee had postponed its decision then, and in the end the UNESCO experts decided that the city simply didn't have what it takes.

Heidelberg has now been asked to "review its criteria," for proposing its place on the prestigious list. UNESCO spokeswoman Anne Chamberlain told the Associated Press that the German city had been asked "to compare itself with other European university towns."

The town is famous for its pretty buildings and university, which was founded in 1386 and is the oldest in Germany. The city's library, which dates back to 1421, is also the country's oldest and in the 18th century Heidelberg was an important center for the Romantic movement. The city escaped bombing during World War II because the US Army wanted to use it as a garrison after the war.

Heidelberg reacted with disappointment to the UNESCO rejection. City mayor Eckart Würzner said he didnt understand the decision, in the light of Heidelberg's fame throughout the world for the beauty of its combination of old town, castle and river. "Heidelberg is part of humanity's cultural heritage," he told the DPA news agency, "even if we're still not on the list."

Germany currently has 32 properties in UNESCO's World Heritage List, including Cologne Cathedral, the palaces and parks of Potsdam and Berlin, and the Dresden Elbe Valley.