DER SPIEGEL: Mr. Dräger, your company is currently receiving a record number of orders and shares in your company are in greater demand than ever. Are you able to derive any satisfaction because of it?

Dräger: The situation is humbling, but it does make me proud. We are aware of our responsibility.

DER SPIEGEL: The German government has contracted you to build 10,000 ventilators. How far along are you?

Dräger: The contract has a detailed delivery plan that spans the entire year. The first devices are now finished. When the news came in from Wuhan, the consequences were almost predictable. We are familiar with them from the SARS crisis. But the contract with the German government represents only part of our output. A larger portion is made up of customers from outside the country.

DER SPIEGEL: Who all is buying equipment from you?

Dräger: Austrian Chancellor Sebastian Kurz was on the phone earlier. He needs 1,000 ventilators, but we can only make 50 available to him at this point. Countless ministers from all kinds of countries have called, and last weekend, the king of the Netherlands called.

DER SPIEGEL: Can you meet the demand?

Dräger: Not completely. We doubled our production volume in February and will ultimately quadruple it. In Lübeck alone (where the company is based), we are hiring up to 500 new employees. 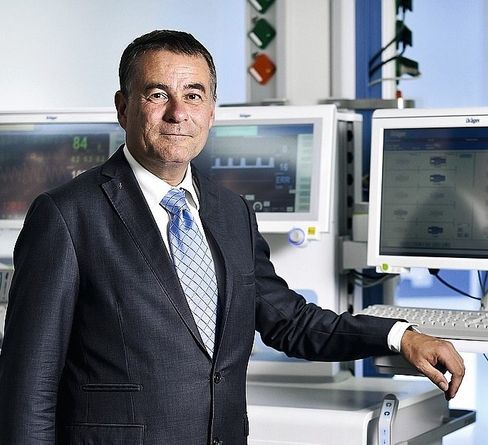 DER SPIEGEL: Given the number of contracts, you have little choice but to set priorities. Is "Germany First” the rule?

Dräger: No. At first, almost all of the devices went to China, where need was greatest. They needed a rather simple device, and we were able to produce 400 of them a week. The device turns ambient air into purified air, only requires an electrical socket and, if necessary, an oxygen cylinder, and requires no connection to a hospital's medical gas supply system.

DER SPIEGEL: How do you decide these days whose order gets filled?

Dräger: That does, in fact, present some difficulties. We are currently receiving news every hour about the situation in various countries that we need to take into account. This means we put human factors first.

DER SPIEGEL: Car manufacturers and other firms have announced that they can manufacture ventilator components. Is that purely a PR move or is it actually helpful?

Dräger: There is little point in adapting unused production capacity to manufacture respiratory aids. I spoke with Daimler over the weekend. They would also like to help. But it’s unfortunately not so simple. We can’t build cars either. Before we invest too much thought into this, we should focus on getting devices that are sitting around in a basement somewhere back into working order. Or can we repurpose other devices? There is a lot of potential there.

DER SPIEGEL: Where do you think these kinds of reserves would come from?

Dräger: I believe it’s possible to use devices from ambulance service or anesthesiology departments. Such devices aren't meant for long-term respiration, but they can serve that purpose. We estimate that in Germany alone, 5,000 devices could be mobilized from this reserve. To make that possible, hospital staff, of course, need to be instructed in how to use these devices. And it also requires action on behalf of the regulatory authorities.

DER SPIEGEL: The machines are one thing. But ventilating COVID-19 patients is complex. Isn’t the main shortage a scarcity of experts?

Dräger: Yes, I’m afraid. And there is another problem: Germany’s health minister may have taken early action, but it remains unclear how the 10,000 devices he has ordered are to be distributed. As a result, many hospitals are contacting us directly. Despite the hardships, we need to ensure that the resources are distributed in the best way possible and that hospitals aren’t receiving advanced equipment for little money that they do not know how to use.

DER SPIEGEL: What is so demanding about these devices?

Dräger: It’s not about the device, but about the person who is attached to it. You have to be able to evaluate the person’s state and know how to precisely adjust the device to first save the person's life and then ensure that they quickly grow healthy again. This requires years of experience.

DER SPIEGEL: In which country is the supply situation currently especially challenging?

Dräger: In Europe, the number of intensive-care beds per capita is very unequally distributed. In Italy, it is three times lower than here. In England, five times lower. The challenge in England will be greater than in Spain. And the situation in the U.S. is very alarming. The reporting system there is also underdeveloped.

DER SPIEGEL: Have you received a call from U.S. President Donald Trump yet?

"When it comes to parts supplies, we have observed a phenomenon similar to the one with toilet paper."

Dräger: We are waiting for it. The U.S. authorities have made a request for 100,000 ventilators. That likely exceeds the annual production capacity of all manufacturers. It is absolutely mission impossible. And even that number won’t be enough. We applied to take on part of the delivery, because we have a responsibility as the biggest manufacturer.

DER SPIEGEL: When will a shortage begin developing for filters, tubes and other components for the ventilators?

Dräger: It already has. When it comes to parts supplies, we have observed a phenomenon similar to the one with toilet paper. There is panic buying going on, but by hospitals - and it is to everyone's detriment. The parts come from all over the world, including from Turkey. I very much hope that the supply chains remain intact despite the protectionism. If someone decides to disrupt them, there will no longer be any ventilators, for anyone.

DER SPIEGEL: Your company also manufactures face masks. Have you ramped up their production like you did with the ventilators?

Dräger: Yes, but the situation is different. When it comes to the ventilators, the demand is so high that we could produce 10 times what we do now. The demand for masks is so high, we could easily sell 100 times what we do now. But that is utopian. We have doubled production and can't do more than that. The masks are produced by fully automated machines that run 24 hours a day, seven days a week.

DER SPIEGEL: Where is the demand for the masks coming from right now?

Dräger: One example: The authorities in the U.S. want to buy 500 million masks. That is simply impossible, for anyone.

DER SPIEGEL: Why aren't there enough masks out there?

Dräger: When the crisis started, speculators quickly stepped in. They bought masks by the container, and are now selling them at extortionate prices. And then there’s the fact that many people who don’t work in hospitals believe they need to wear masks.

DER SPIEGEL: The German government banned the export of face masks early on. Hasn’t that helped?

Dräger: The French president said he wanted to halt exports and confiscate protective gear. Then Germany followed, and there was a chain reaction. The problem is that there are no large mask producers in Germany. In our case, masks only make up 0.3 percent of our revenue. We manufacture them in Sweden and South Africa. The stop in exports means that other countries are also holding onto the items they produce.

DER SPIEGEL: The Association of General Practitioners in the state of Lower Saxony has released sewing instructions for protective masks, claiming that you can make your own masks out of dishtowels. Is that a good idea?

Dräger: If it helps people on the streets feel safer, then why not? That will leave more specialized products for doctors and nurses.

DER SPIEGEL: How can a supply bottleneck be avoided in the future?

Dräger: Germany needs to develop an intelligent system for storing a certain number of masks that can be used if needed. The sticking point is that masks have an expiration date. The masks would need to be regularly removed from storage as they neared their expiration date and sold. I have made a few suggestions on the issue to Health Minister Jens Spahn.

DER SPIEGEL: Do you have a stock of masks saved up in your home?

Dräger: No, not a single one. I’m only 57 years old, so I still have three years until I belong to the risk group.

DER SPIEGEL: What are the lessons to be learned from this crisis?

Dräger: It shows that common sense is more important than we all thought. This situation is so new and complicated that the problems can only be solved by people who carefully weigh their decisions. Artificial intelligence, which everyone has been talking so much about recently, isn't much help at the moment.

DER SPIEGEL: Are you still taking all the calls from government ministers and heads of state, or have you begun switching off your phone?

Dräger: Everyone who submits an inquiry receives an answer. I just got a call from a group that would like to donate a single ventilator to Romania. They will, of course, also get an answer from me.

DER SPIEGEL: What will the answer be?

Dräger: One they will probably not be happy about. Unfortunately. 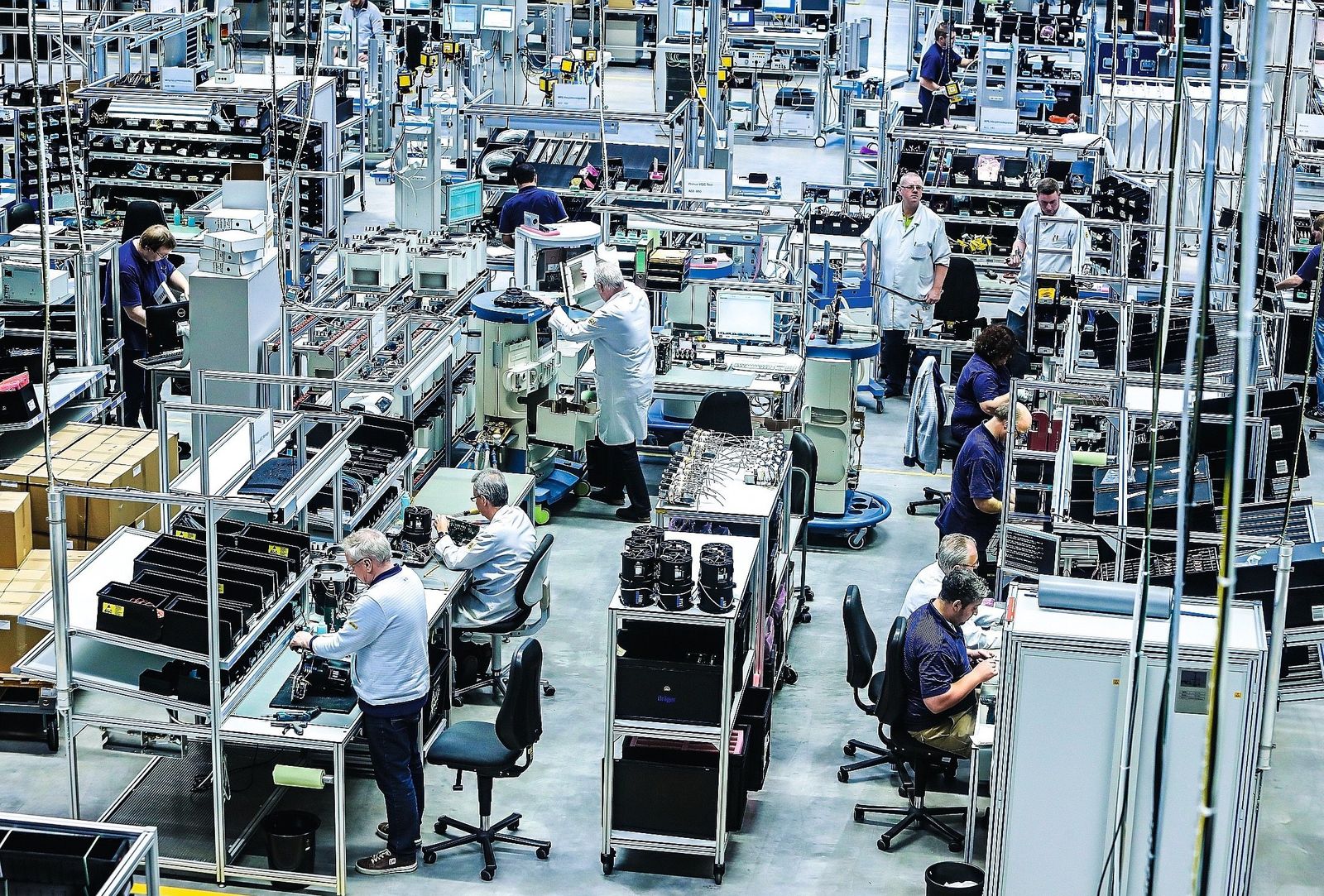 Workers at the Dräger factory in Lübeck: "Last weekend, the king of the Netherlands called." 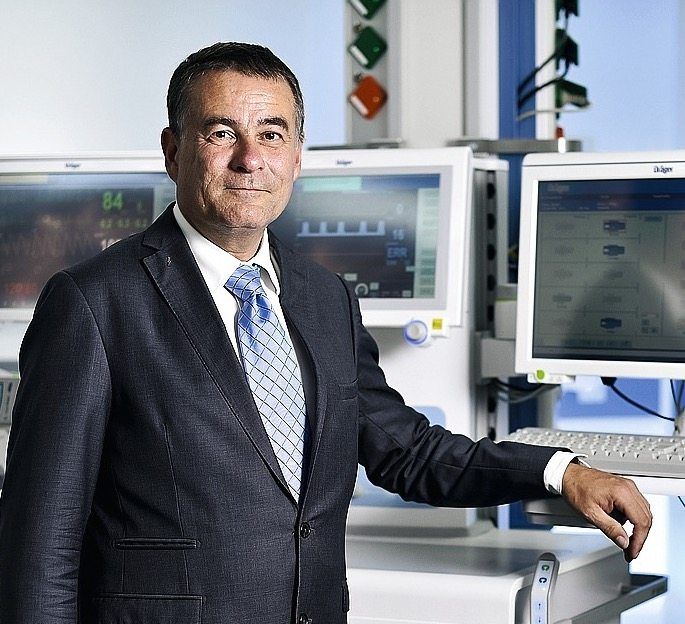