SPIEGEL: Mr. Grünewald, in the lead up to the election, the Rheingold Institute has once again undertaken a detailed analysis of Germany's political state. How did you proceed?

Grünewald: We put 50 voters on the couch. Twenty-six underwent in-depth psychological interviews, the others took part in three group discussions. Seven psychologists took part in the study, with two of them focusing on eastern Germany. It isn't representative, but you can recognize certain traits.

SPIEGEL: What did you find out?

Grünewald: On a fundamental level, the voters are totally disappointed in this election campaign. They feel like the things that are important to them aren't being discussed and that many things are being glossed over. We wanted to find out why.

SPIEGEL: What did you discover?

SPIEGEL: What exactly is the problem?

Grünewald: The crisis two years ago plunged voters into a dilemma for which they still haven't found a clear response. Do I open the door, or do I close it? On one hand, they want to be part of the welcoming culture, but they are also afraid of being overwhelmed by foreigners and of no longer being able to recognize their own country. As a result, they want policymakers to develop a plan, to establish a compromise position. But they haven't, and now voters feel abandoned.

SPIEGEL: What is the consequence of this?

Grünewald: Voters are disoriented, full of uncertainties. They describe Germany either as an ailing, run-down country or as a secure island of affluence in a sea of risk. It's all very fragile and leads to emotional outbursts. I have never before seen so much anger and hatred among test subjects.

Grünewald: Not yet, because in reaction to the perceived hardening of the fronts, voters are also taking a step back. They argue that we cannot afford to slip into polarization because we are surrounded by three brutes: Trump, Erdogan and Putin. The anger is being expressed in shadowy digital worlds, but in the analog world, they keep a tighter rein on themselves.

SPIEGEL: Is the refugee crisis just a symbol for their discomfort with the difficult state of the world today?

Grünewald: Yes, because long before the refugee crisis people felt alienated by globalization and were also concerned about global security.

SPIEGEL: How is Trump being perceived?

Grünewald: He works to Merkel's advantage. Because of him, Putin and Erdogan, she is seen as the person who can tame the brutes. The chancellor is seen as the only one we can depend on, so we have to have a good relationship to her.

SPIEGEL: And her challenger?

Grünewald: Amid the skepticism around Merkel, Martin Schulz (of the center-left Social Democrats -- SPD) arrived early this year as a figure seen as down-to-earth with a take-charge attitude. He was seen as a returning father, someone to finally fill the paternal vacancy in German politics -- and it was blown up to almost messianic proportions. Schulz, the person, couldn't fulfill these expectations. He is seen more as a friendly uncle. The SPD faces a potential disaster in this election.

SPIEGEL: Could the right-wing populist Alternative for Germany (AfD) party do better than polls are currently leading us to expect?

Grünewald: The AfD channels a lot of this anger but it doesn't have a leadership figure. As such, it was a mistake to remove Frauke Petry from the spotlight. The tendency of voters to keep themselves in check, as I described earlier, won't help the AfD.

SPIEGEL: And the Green Party. Will they do well because climate change is such a critical issue?

Grünewald: No, it'll be tight for them. People think their problems lie elsewhere. And the Greens are also seen as arrogant because their fight for nature is often directed against human nature.

SPIEGEL: How do your test subjects see their personal situations?

Grünewald: Good but they are also struggling to find their place. Workplaces, daycare spaces, parking spots. Housing is also a big issue. All are symbols for the strong need for structure and orientation.

SPIEGEL: Does the chancellor provide this order?

Grünewald: In part. She will win by a wide margin, but it is still little more than a half-hearted expression of loyalty. The tried-and-true will once again be put on probation.

SPIEGEL: If the far-left Left Party, the SPD and the Greens had fielded a different joint candidate and promised a completely different plan of action, would that have been well received?

Grünewald: We discussed a variety of possible coalitions with the test subjects. But that one was never mentioned.

SPIEGEL: What came up instead?

Grünewald: Merkel with (Christian) Lindner (of the pro-business Free Democratic Party -- FDP). There was a real love for Lindner in the interviews. The FDP's candidate is seen as a modern TV star, even like a kind of 007, who can engender change. A kind of dream team is the result: the proven Merkel and a mini German Macron that gives her a helping hand. As such, I'm predicting a coalition of Merkel's conservatives with the FDP. 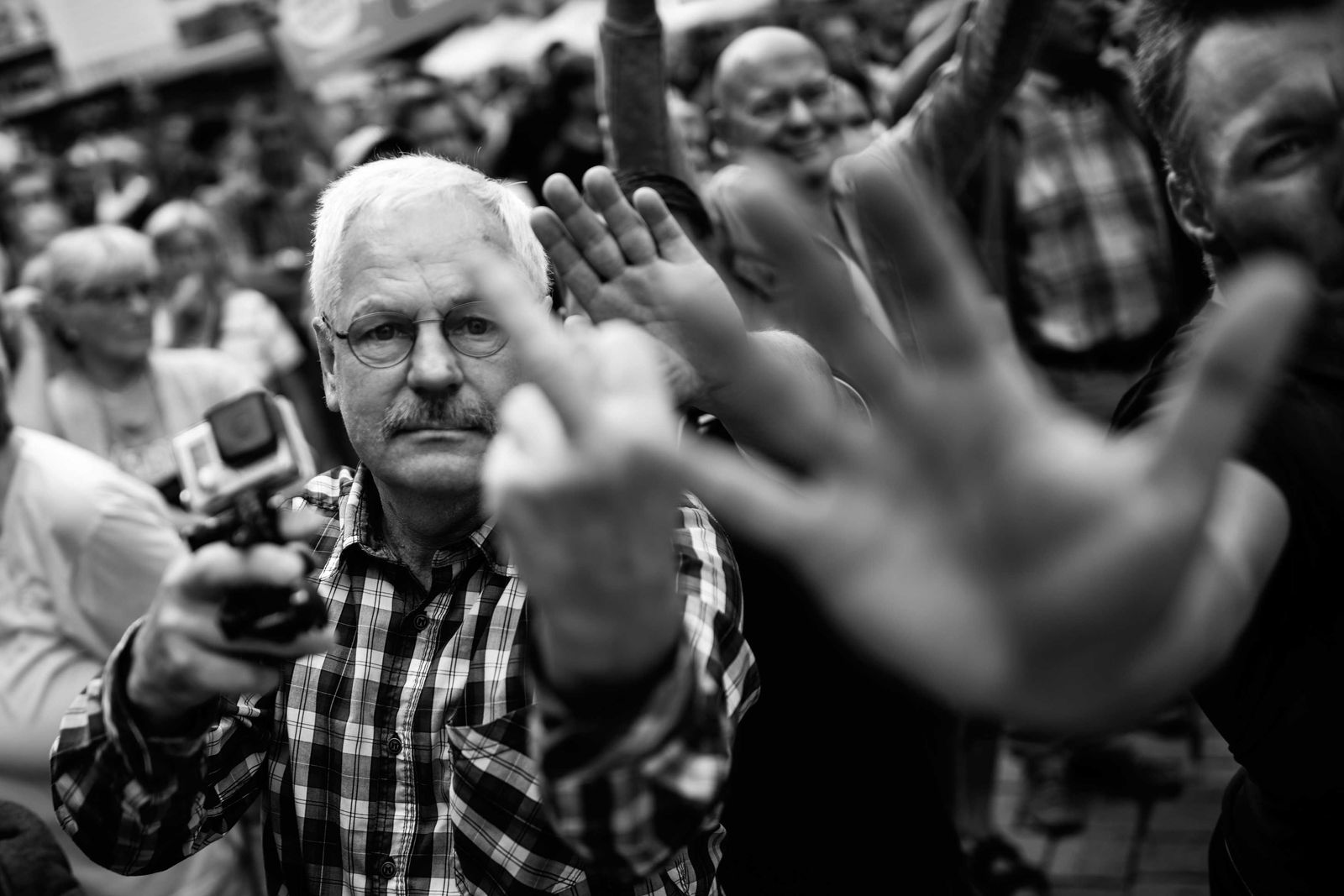 Protesters greeting Chancellor Angela Merkel in the city of Quedlinburg in August 2017. 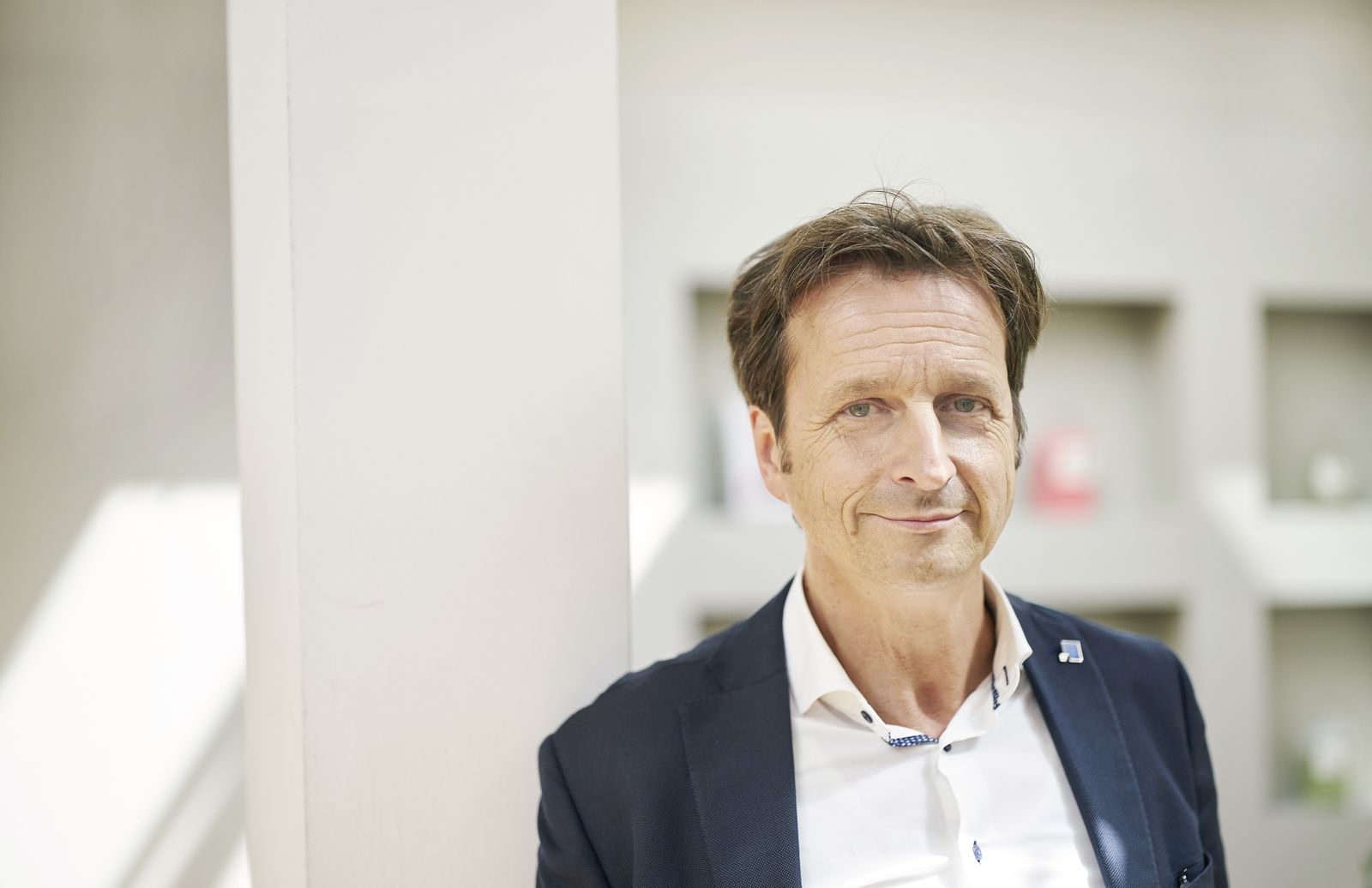