It doesn't take much these days to rile German Finance Minister Wolfgang Schäuble. Last Thursday, as he made his way to the stage at George Washington University in the US capital, for example, a steward stretched his arm out to guide Schäuble to the stage. "Yes, yes, I can see," Schäuble grumbled irritably as he pushed his wheelchair forward.

His tetchiness is understandable. Schäuble this autumn is on the defensive to an extent not seen in some time. During his appearance on the panel, he faced repeated demands from other speakers, including Italian Finance Minister Pier Carlo Padoan and former US Treasury Secretary Larry Summers, for Germany to take action to spark economic growth in Europe. He sought to counteract them with his usual mantra, according to which Germany remains the motor driving the entire European economy.

The problem, though, is that Europe's motor is losing steam, with a slew of bad news about the German economy in recent weeks. The latest business climate index published by the respected Munich economic think tank Ifo, which is considered to be a reliable early indicator, fell for the fifth straight month in September to its lowest level in almost a year and a half. Furthermore, German factory orders are down and exports are collapsing. And last week, the country's leading economic research institutes issued downward revisions of their economic forecasts for this year and next.

The course correction has created a dilemma for Schäuble. His draft federal budget for 2015 is based on the higher growth predictions. A conservative with Chancellor Angela Merkel's conservative Christian Democratic Union (CDU), Schäuble is hoping to become the first finance minister since 1969 to present a balanced budget free of new debt. Indeed, it has become Schäuble's ultimate career goal. But weakening growth translates to lower tax revenues and the finance minister's dream may now be washed away in a flood of red ink.

The rule of thumb in Germany holds that growth loss of half a percentage point leads to a shortfall in the federal budget of around €4 billion ($5.07 billion), half of which must be absorbed by the government. "It's always possible to drum up €2 billion in a budget of €300 billion in order to stay in the black," a sanguine Schäuble confidant says. Beyond that, though, the wiggle room disappears.

Can Room Be Found in Budget for Investment?

At the same time, Schäuble would also like to do more to spur growth if he can do so without jeopardizing his goal of a balanced budget. He wants to restructure the budget, moving away from consumptive expenditures and focusing instead on investment. Given that his draft budget is still the subject of preliminary consultations in German parliament, he still has plenty of time to shift funds around.

Schäuble has hinted to parliamentarians where money might be found. Germany's social security funds are currently operating with large surpluses and they could get by, for a time at least, with reduced allowances from the federal budget. The funding this would free up -- somewhere between a few hundred million euros and a little over €1 billion -- could be invested in road construction.

Still, the finance minister is aware that simply relabeling funds may not be enough to quiet critics, so he has another trick up his sleeve. He wants to win over private investors earlier than previously planned to pump capital into repairs of ramshackle bridges, building roads and other infrastructure projects. It's an idea Schäuble busily peddled at the fall meeting of the International Monetary Fund and the World Bank in Washington over the weekend.

He didn't find very many supporters. Indeed, it would seem that many in Europe and further abroad would like to see more than a bit of numbers juggling from Germany. "What's happening in Europe is not working," Summers said at the IMF meeting. "The monolithic focus on the financial deficit to the exclusion of the investment deficit, which causes growth deficit, has been a very substantial error." He also warned that Europe could find itself on a path of Japanese-style stagnation and deflation.

In comments clearly directed at Germany, Summers argued in favor of "self-financed infrastructure projects" by governments. He noted that no one can currently borrow money cheaper than governments can. Through higher growth, he argued, "public infrastructure payments can pay for themselves."

The chorus of Germany critics is large at the moment. "We are rather concerned about cooling in Germany," IMF Europe expert Mahmood Pradhan said last Friday. Former Finnish Prime Minister Jyrki Katainen warned that Berlin needed to invest in infrastructure and education to remain strong.

And Euro Group head Jeroen Dijsselbloem warned on Monday in the Frankfurter Allgemeine Zeitung that Germany must continue reforming instead of reflecting smugly on the reforms it has already passed. "You can't look back self-contentedly at reforms that were made years earlier," he wrote.

Though Schäuble expressed agreement with Dijsselbloem's statements, he has remained firm when it comes to his fiscal strategy. "In Germany, we have shown in recent years that solid finances and better growth are not contradictory -- they are necessary complementary elements," he said on Monday in Luxembourg, where he was for a meeting of euro zone finance ministers. He added that calls for state spending were "old fashioned."

Criticism of Schäuble's position is also mounting in Germany. "The decision to balance the budget is a risky one," says Marcel Fratzscher, the head of the German Institute for Economic Research (DIW) in Berlin. "If the economy continues to weaken, that goal will no longer be sustainable."

Critic: Germany Should Use Wiggle Room

If the government were to stick to its guns, he argues, it would have to implement budget cuts that would further hasten the crisis. Instead, he argues, the finance minister should take advantage of the "wiggle room" provided in the balanced budget amendment to Germany's constitution "to increase public investments." Under the law, which was approved by parliament in 2009 and goes into full effect in 2016, the federal government is permitted maximum annual borrowing of 0.35 percent of gross domestic product, the equivalent of about €10 billion next year. "That would send a strong message to the German business community and to Europe that Germany takes its responsibility seriously," Fratzscher says.

But Merkel's government seems set on achieving a balanced budget. Even worse, the current government made the very decisions that are now robbing it of the means it would need to counter a possible economic downturn.

Has Germany Given Away the Bank?

At the very beginning of its term, Merkel's current government approved an expensive package of what amounted to pension gifts for women and older workers that is now consuming up to €9 billion a year in public finances. In their autumn economic forecast released last week, the country's leading economic think tanks warned that the German government has "already given away a substantial amount of its room for maneuver."

Compounding the problem is that measures taken by the government -- a coalition of Merkel's CDU and the center-left Social Democrats (SPD) -- are contributing to weak growth. The think tanks predict that projects undertaken by the coalition, including allowing people to retire at the age of 63 and the introduction of Germany's first-ever national minimum wage, will cause around 300,000 jobs a year to disappear. The CDU and SPD haven't done much to fuel investments to counter that trend either. Interest rates in Germany may be lower than they've ever been before, but few companies have plans to build new factories or buy additional heavy machinery, they warn. The report states that while the many international crises do play a role -- from the Middle East to Ukraine -- homegrown factors do as well, especially the hostile environment created by (the government's) economic policies."

Leaders of the coalition parties now want to do something to foster investment. But it shouldn't cost anything. "We need a new focal point for the government's work," says Horst Seehofer, the head of the Christian Social Union, the Bavarian sister party to Merkel's CDU. "That focal point should be an emphasis on growth and secure jobs."

The conservatives and the SPD agreed to that shift at a coalition meeting last week. Hints of the shift are already apparent, too. For example, Merkel's chief of staff Peter Altmaier, whose position is cabinet level, applied the brakes to plans by Environment Minister Barbara Hendricks to push through new rules that would have largely banned fracking shale and coal seams for natural gas. And Seehofer wants to rein in plans by Family Minister Manuela Schwesig to expand the country's medical leave to care for a terminally ill family member from a current unpaid 10 day period to a full three months.

At the meeting, Volker Kauder, the head of the joint CDU/CSU parliamentary group, gave the marching orders. "No more burdens can be placed on the economy," he said. 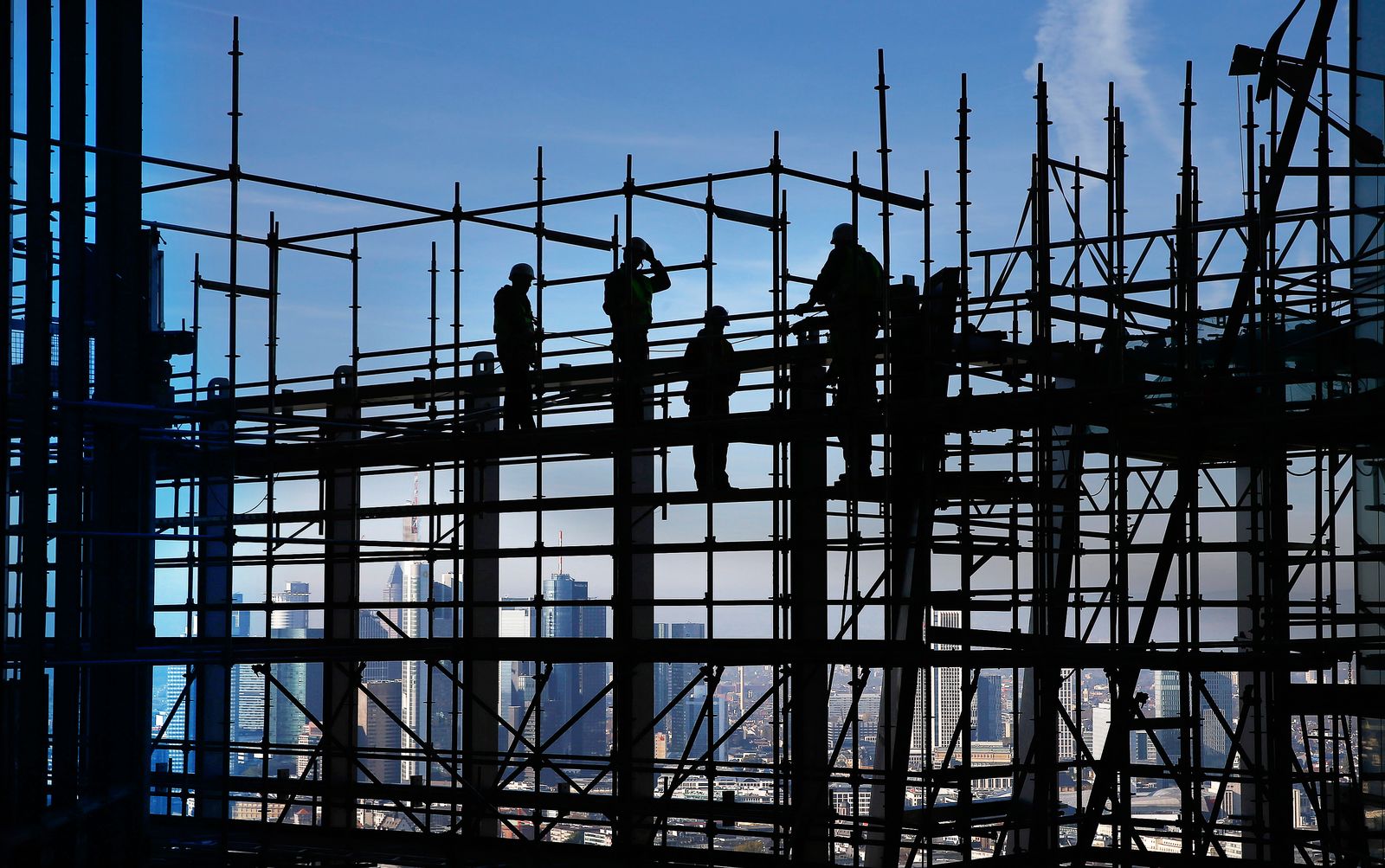 Construction workers at the site of the new European Central Bank headquarters in Frankfurt. Critics say Germany is doing too little to spur economic growth. 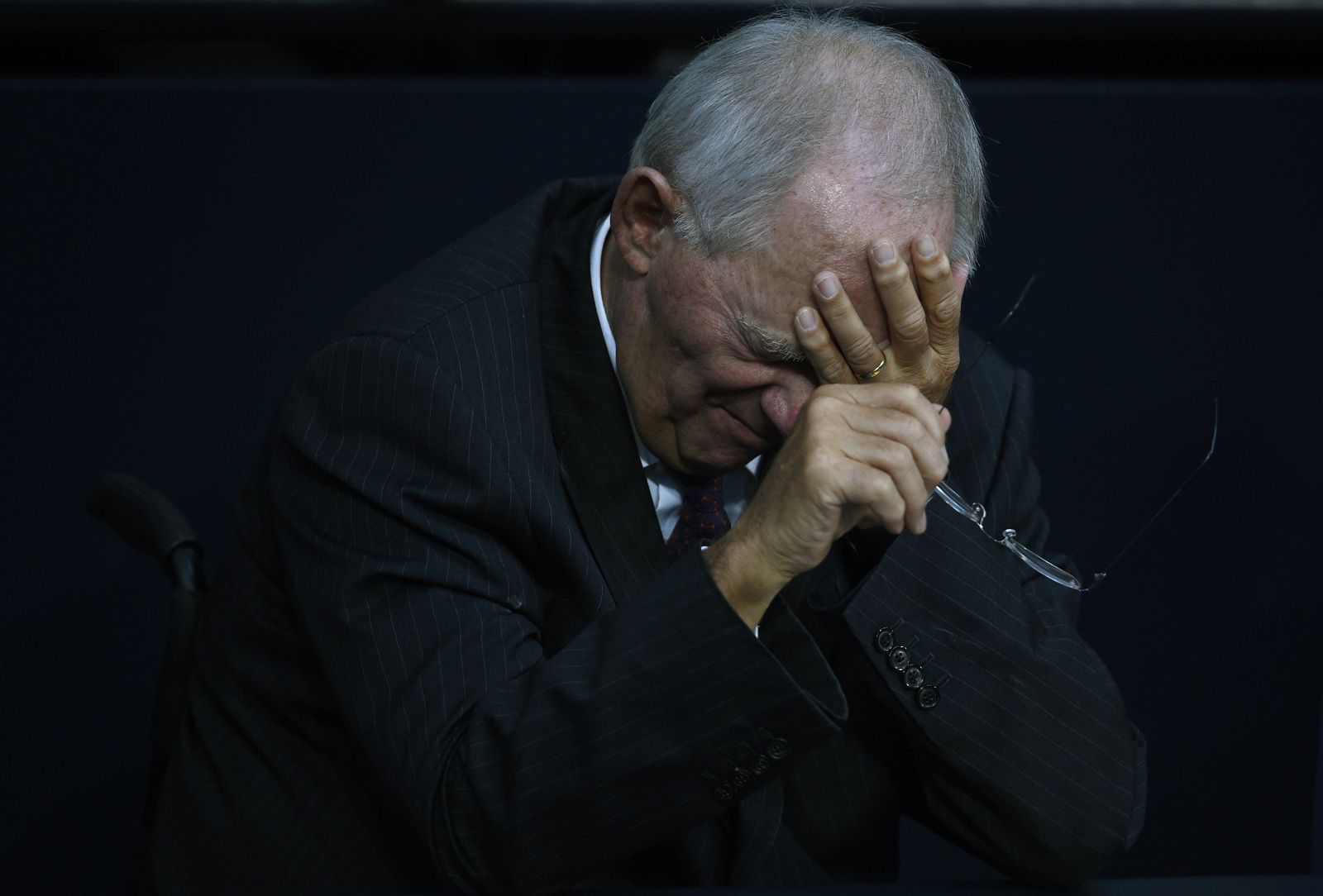 German Finance Minister Wolfgang Schäuble has been facing criticism at home and abroad over his conservative fiscal policy.