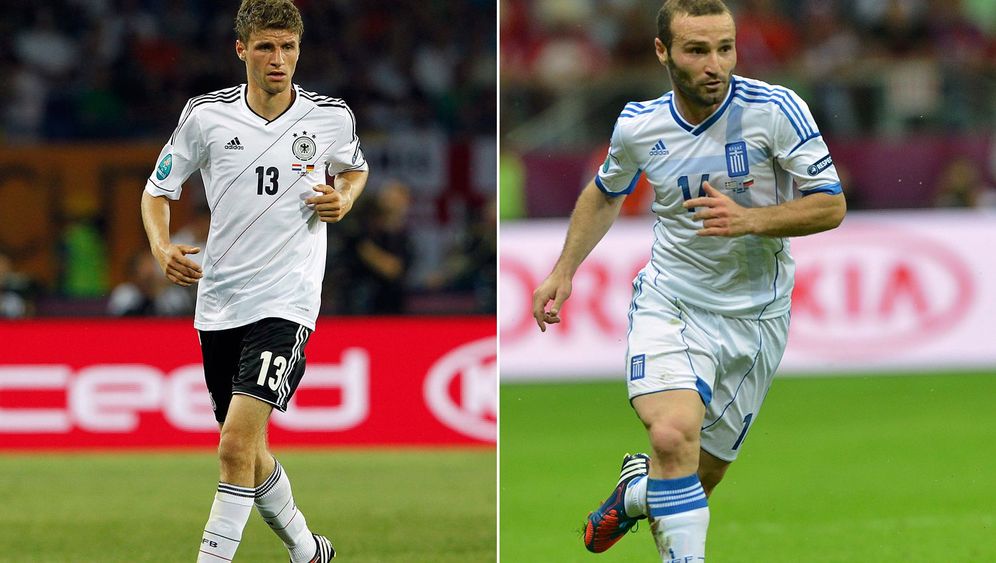 Germany and Greece. They are Europe's strongest and weakest members -- at least financially. The two countries will face off on Friday night, but not, as they so often have in recent months, at the negotiating table.

This time they will meet on the football field, where the two national teams will battle it out in a quarter-final match at the European Football Championship, co-hosted by Poland and Ukraine. But will the German side dominate the Greeks on the pitch as thoroughly as Chancellor Angela Merkel has dominated the discussion about the future of the euro and austerity measures in Greece?

German national team coach Joachim Löw says he's not interested in linking Greece's euro troubles to the ones its players may have on the field with his team. "As you know we have a good relationship with Angela Merkel," Löw told reporters at a press conference this week. Indeed, Löw's team considers the chancellor to be its lucky charm. After she visited the team at its hotel in Gdansk ahead of the tournament, Die Mannschaft, or "The Team," as they're called in German, proceeded to win all three of their group-stage matches.

So it was good news when the Chancellery announced on Wednesday that following her meeting with Italian, French and Spanish leaders in Rome on Friday, Merkel would attend their match against Greece. The schedule change was made possible after the Italian government moved up the meeting time, which was initially supposed to end just as Germany and Greece kicked off.

It is unclear if she will meet newly elected Greek Prime Minister Antonis Samaras at the game, but Löw has nevertheless been trying to downplay the inevitable political overtones of the match. "We've made an agreement that she doesn't meddle in the line-up and tactics and I don't do that with her political statements," he said.

When it comes to trying to preserve the euro's value, Merkel is seen as the currency union's taskmaster. And Greece, perceived as the biggest troublemaker among the euro-zone's ailing economies, has often been the target of her efforts, which many in the country feel have been too harsh.

Though the current euro crisis debate is focused on whether the terms of Greece's EU bailout can be relaxed, extra chances for the Greek team are unlikely to be willingly accorded on the Gdansk football field this Friday. So far, the German side has been a formidable presence in the tournament, having racked up their three victories in a group that was considered to be by far the toughest.

But the Greeks haven't played poorly, either. They tied co-hosts Poland in the opening match, which was widely expected to be won by the Poles. Then they lost to the Czechs, but beat Russia in what was seen as a stunning upset. German coach Löw has said the Greeks are not to be discounted, and a few pundits agree. But the overwhelming majority of predictions are for a German victory. Naturally, German fans commenting on sports websites concur. They say Germany is not only superior when it comes to all things economic, but it also has a much better football team.

And despite Löw's resistance to politicizing the match, many German fans appear to be more concerned with Greece's economic woes than with its potential to kick Germany out of the tournament.

"Hello you dear Greeks. I wouldn't try to get revenge with your loser team," one fan wrote in an online post co-published by Yahoo Sport Deutschland and EuroSport.com. "I would lay the blame for your disaster on yourselves (the people who don't pay their taxes and the others who send their money abroad or invest in German stocks)," the fan continued.

The German preoccupation with Greece's economic woes can be seen in the numerous postings on such sites that nearly all begin with commentary about the economy instead of the Euro 2012 competition. Some are way below the belt. "Here's a secret tactical tip," one user suggested. "Every German player takes a few euro coins onto the field and lets one fall when things get tough. The Greeks will be so busy picking them up that the players can continue to kick the ball unobstructed."

Another cursed the Greeks, saying they have been feeding off the EU, and thus Germany, because the country is the biggest financial supporter of the EU. "I would have thrown them out of the EU and let them go completely bankrupt with their worthless drachma. But when it comes to football: 7:0 for Germany," it said.

But there was at least one commenter who rooted for the underdog Greeks. "It would be really beautiful if (Greece), which has been cursed and denigrated from all sides, were to win over the 'top euro country'."