Marking its most vocal response yet to the United States for alleged spying and a tough new tone, the government in Berlin asked Washington's top CIA official in Germany to leave the country on Thursday. The news followed a meeting of the Parliamentary Control Panel (PKGR) in the federal parliament responsible for scrutiny of intelligence services.

Panel Chairperson Clemens Binninger said the request had been "a reaction to unsuccessful cooperation in the pursuit of clarification." The panel convened a special session on Thursday to discuss two cases of suspected spying by German government employees on behalf of the United States that have emerged during the past week.

And this Wednesday, the Federal Prosecutor's Office in Karlsruhe confirmed it is investigating a second case, based on suspicions that an employee with the Defense Ministry in Berlin may also have passed secrets on to the US.

The revelations of the past week show that, in addition to conducting signals intelligence to gather information on Germany, US intelligence agencies are also using human intelligence. They strongly suggest that US services in Germany continue to collect large amounts of intelligence, and all this despite the outrage over the NSA scandal and news in October 2013 that the Americans had been spying on Chancellor Merkel's mobile phone.

Initially, there had been talk of a formal expulsion of the CIA employee, who is officially accredited as the so-called chief of station and is responsible for the US intelligence service's activities in Germany. A short time later, the government backpedalled and said it had only recommended that he leave. Although it cannot be compared with a formal explusion, it remains an unfriendly gesture.

On a diplomatic level, it is no less than an earthquake and represents a measure that until Thursday would have only been implemented against pariah states like North Korea or Iran. It also underscores just how deep tensions have grown between Berlin and Washington over the spying affair.

The decision to take the step was made during telephone talks on Thursday morning between Interior Minister Thomas de Maizière, Foreign Minister Frank-Walter Steinmeier and Chancellery boss Peter Altmeier, who is Chancellor Angela Merkel's chief of staff. The three ministers had expressed disappointment over American reactions and were unanimous in agreeing that Germany could not simply let the matter rest.

They discussed the communication received from Washington in reaction to the revelations. CIA chief John Brennan and US Ambassador John Emerson had both been in contact with officials in Berlin, but they in turn felt they weren't given any concrete offers to quickly clarify the allegations. And there was absolutely no talk of any apology from Washington.

Officially, the government in Berlin had been reserved in its reaction, with officials indicating they would wait to see what the investigation concluded and also whether the US offered a possible explanation. By Thursday, however, irritation in Germany had grown such that the government abandoned its reserve.

Interior Minister de Maizière did not comment after the consultations, but Finance Minister Wolfgang Schäuble sought to play down the possible damage caused by the German intelligence leaks, describing the information the US had obtained as "laughable."

At the same time, he also said that the political damage caused through the suspicion of US spying alone had been "serious." He added that Germany needed effective protection from attacks on its modes of communication as well as effective counterintelligence, which he described as "indispensible to our democracy, which is capable of defending itself."

Reacting to the latest development, German Chancellor Angela Merkel sharply criticized US spying in Germany. "From my point of view, spying on allies ... is a waste of energy," Merkel said. She argued that intelligence work in the 21st century should concentrate on what is important -- international conflicts like Syria or the advance of ISIS in Iraq -- and not on what happens to be technologically possible.

In the most recent case, SPIEGEL ONLINE has learned, the suspect in question had worked for close to a year as a desk officer in the Defense Ministry's political department, where he worked on international security policy and had wide-ranging access to internal documents. The suspect had allegedly been under observation for months by Germany's military intelligence agency, the Military Counterintelligence Service (MAD). The suspect had reportedly met conspicuously often with contact people MAD officials viewed as being associated with the US intelligence apparatus. Although the man's computers have been seized and he has been subjected to an extensive interrogation, there is not yet any concrete proof that he spied and he has since been released from detainment.

In comments made to the Berliner Zeitung newspaper, Defense Minister Ursula von der Leyen demanded a response from the US, saying that Washington must "once again develop a common understanding with us on how we want to work together in the future."

The defense minister added that "trust had been shaken" since the revelations by NSA whistleblower Edward Snowden that US intelligence agencies have been spying on Germany. She said that if Washington is "interested in trusting relations in the long term," then it will also have to make clear to its intelligence services that it is not "politically acceptable" to do just anything it is capable of doing.

German Finance Minister Wolfgang Schäuble also expressed pointed criticism. Speaking to a public broadcaster, he said that even though Germany had succeeded in "defending itself from terrorist threat against Germany" with information from intelligence agencies, that didn't give "the Americans the right to recruit third-class people here." Addressing the latest development, he said, "that is just so stupid, and so much stupidity makes you just want to cry." He added that Chancellor Merkel is "not amused." 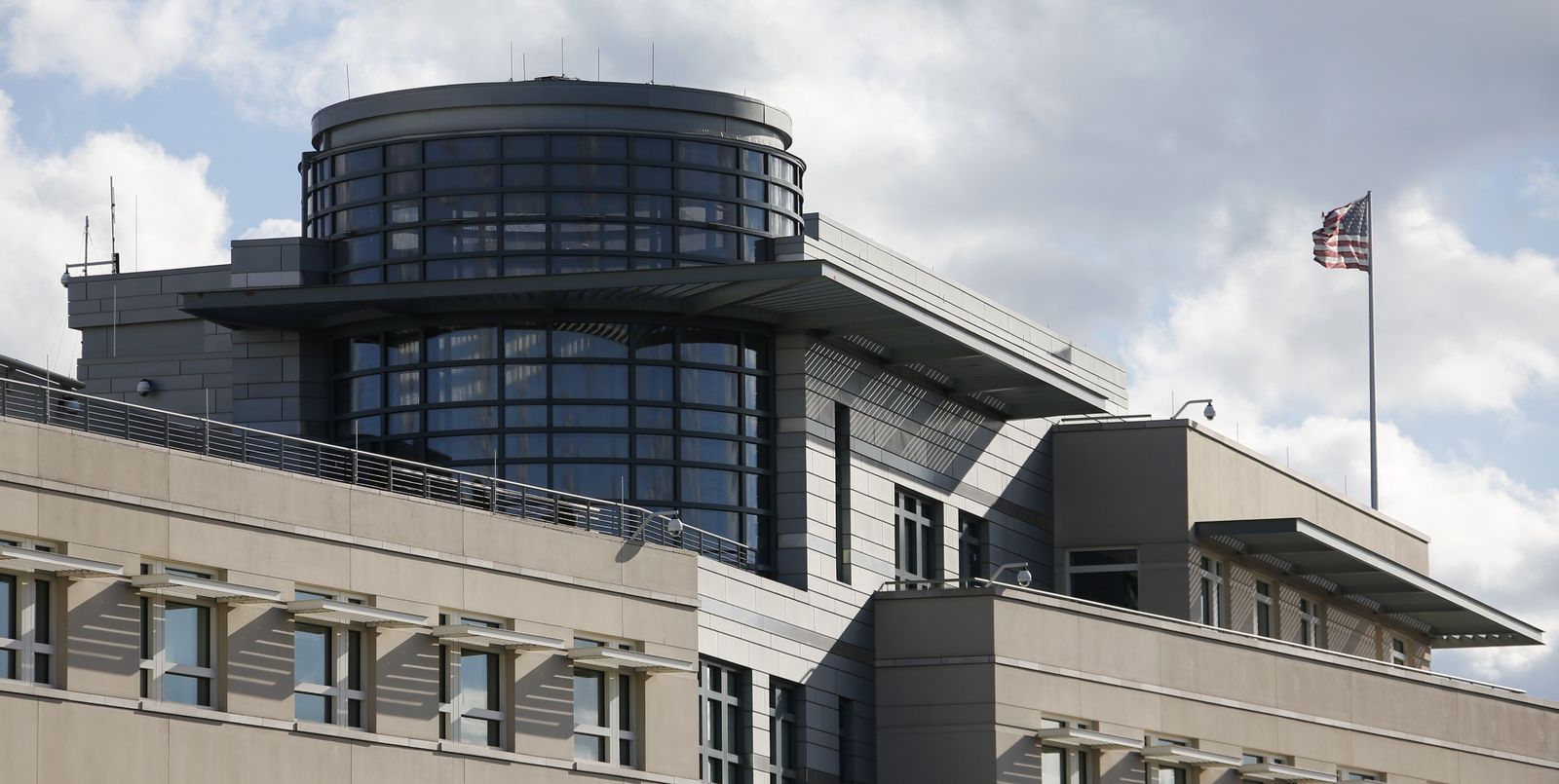 The US Embassy in Berlin: Outrage is growing over American spying on Germany.