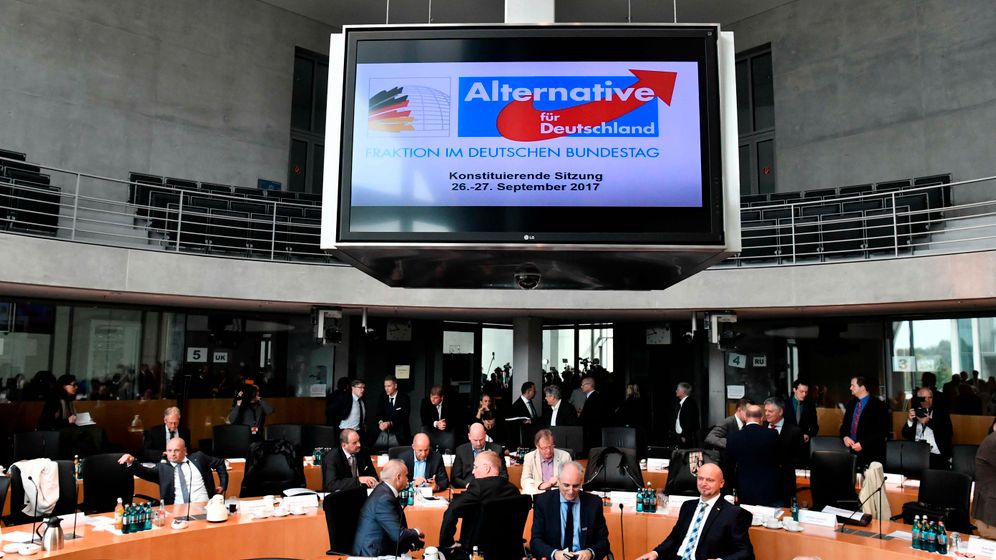 Photo Gallery: The AfD Set to Enter the Bundestag

The new parliamentary group has its offices where administrative employees used to issue parking permits: on the ground floor, behind the entrance and to the right, on the side of the building facing away from the Rhine River. Nevertheless, Andreas Keith is satisfied. "We have no reason to complain," says the head of the AfD parliamentary group in the North Rhine-Westphalian state parliament in Düsseldorf. The offices are furnished and the internet works, he points out.

Of course, representatives of other parties have not been very accepting, says Keith. "When I get in the elevator, some people break off their conversations." Others refuse to greet him or avoid shaking his hand. In fact, he says, he is perfectly happy that his party occupies its own office wing.

The far-right AfD, or Alternative for Germany, heads the science committee in Düsseldorf, a "large, important committee," according to Keith, a forestry engineer. The AfD wanted one of its members of parliament to be appointed to the position of vice-president of the state parliament, but the other parties denied the request. "They might have decided differently if they had taken the trouble to learn more about our candidate," says Keith, whose every sentence seems shaped to convey the message that the AfD is a perfectly normal party.

As a precaution, the parties in the coalition government in Berlin have changed the rules of procedure in the Bundestag to avoid offering the AfD a platform right from the start. The constituent meeting after the election will no longer be opened by the oldest member of parliament, which would probably have been a 77-year-old AfD candidate from Lower Saxony. Instead, the honor will now be conferred on the longest-serving member, 75-year-old Wolfgang Schäuble.

The Left Party and the Greens were opposed to using such procedural tricks. But it was a test case for the kinds of decisions the other parties will have to make for dealing with the right-wing populists in the future. Will they try to keep the AfD away from key positions in parliamentary operations? Or will they treat it like a normal party?

Test Cases in the German States

Both strategies were tested in state parliaments. Proponents of the first approach want to avoid giving the AfD any opportunity to draw attention to itself, while those in favor of the second option are opposed to using legalistic tricks against the AfD. They argue that this would enable the right-wing populists to portray themselves as victims and thus appeal to their base.

"The AfD should be entitled to all rights it has under the rules of procedure," says Marc Herter, the parliamentary managing director for the center-left Social Democratic Party (SPD) in the Düsseldorf parliament. He said the lawmakers there refused to do the AfD the favor of marginalizing the party. "They cannot receive the status of martyrs," says Herter. The SPD lawmakers in Düsseldorf agreed to refrain from heckling the 16 AfD parliamentarians when they are speaking, and to focus on arguments of substance instead. But for the other parties, allowing the AfD to appoint a vice-president of the state parliament would have been going too far.

The established parties are engaging in similar maneuvers in other state parliaments. In Rhineland-Palatinate, where the AfD entered the parliament as the third-strongest party, a supersized coalition of the SPD, the center-right Christian Democratic Union (CDU), the Greens and the pro-business Free Democratic Party (FDP) ensured that the AfD could only acquire one seat in each of the parliamentary committees.

The AfD's presence in German states

Before the first committee met, this coalition reduced the number of members per committee from 13 to 12 and adopted a new seating distribution procedure that favors the larger parties. And because this would have completely eliminated the Greens, as the smallest group in the state parliament, a new "basic mandate clause" was added to the rules. It states that each parliamentary group must be given at least one seat in each committee. As a result, the AfD can now appoint only one representative to each committee instead of the two members to which it was originally entitled, based on its overall number of seats. The FDP and Greens, both members of the coalition government, now hold a total of two seats in the committees, even though they captured significantly fewer votes combined than the AfD alone.

In the southwestern state of Baden-Württemberg, lawmakers reduced the number of vice-presidents of the state parliament from two to one, to ensure that the AfD, as the third-strongest party, would have no access to the position. Similar approaches were taken in the eastern states of Saxony and Thuringia when the AfD entered those parliaments. But now more and more members of the state parliaments believe that such strategies ultimately benefit the right-wing populists.

Rico Gebhardt, the Left Party parliamentary leader in Saxony, said his parliament's members agreed "to refrain from playing games with the rules of procedure." Otherwise, he explains, they would only be giving the AfD "material to portray itself as an innocent victim of the system." All committees in the Saxony state parliament are staffed on a proportional basis. An AfD member chairs the Committee for Social Affairs, Consumer Protection, Equality and Integration.

Lawmakers in the northeastern state of Mecklenburg-Western Pomerania are accustomed to difficult situations, after having to put up with the far-right National Democratic Party of Germany (NPD) in the state parliament for two legislative periods. The democratic parties adopted a joint approach against the right-wing extremists called the "Schwerin path" (Schwerin is the state capital): no cooperation whatsoever. Every NPD motion in the parliament was unanimously rejected by all other members. In debates, only one member spoke on behalf of all the parliamentary groups.

But in the case of the AfD, the second-largest force in Schwerin, many believe this is the wrong approach. "Whether I like it or not, the AfD represents relevant segments of the population, and as a democrat, I acknowledge this," says Thomas Krüger, leader of the SPD parliamentary group in Schwerin. As a result, a 70-year-old AfD member, as the oldest lawmaker in the state parliament, opened its constituent meeting. During the G-20 summit in Hamburg, she publicly mused on Facebook over whether looters should be shot on the spot.

Lawmakers from the other parties hope that the AfD will reveal its true colors with statements like this, or that it will quickly exhaust itself in everyday parliamentary life.

Lawmakers in Saxony were spared having their constituent meeting opened by the oldest member, an AfD politician. The candidate was forced to relinquish the position after his connections to right-wing extremist groups were exposed. In Saxony-Anhalt, the first session of the state parliament headed by an AfD vice-president had to be ended after seven minutes. The lawmaker, who was clearly out of his element, had repeatedly had to ask the administration about parliamentary procedures. He was so unnerved by the incident that he later stepped down from the position.

Of the 25 AfD members who originally entered the Saxony-Anhalt state parliament, three have since resigned. The same number have stepped down in Thuringia, while two AfD members have abandoned their seats in Baden-Württemberg.

The right-wing populists have brought a new, cruder tone into state parliaments. In Baden-Württemberg, an AfD representative insulted his colleagues by accusing them of treason. In Rhineland-Palatinate, AfD lawmakers shouted the words "child abuse" at a Green Party state minister in an apparent reference to a very old debate about pedophilia in the party.

German security agencies face completely different concerns. They fear that AfD parliamentarians could pass on secret information from the Parliamentary Control Committee (PCC), which supervises the work of intelligence agencies, to right-wing media organizations like the far-right magazine Compact or even to members of the Russian government.

It would be easy for the established parties to keep the AfD out of committees that have access to intelligence information. There is no mention of party proportionality in the law governing the PCC, each member of which must be confirmed by the Bundestag in a secret vote. "We will see whether the AfD candidates will get a majority to support them for such sensitive positions," says Green Party lawmaker Konstantin von Notz.

But excluding the AfD from these types of positions would only enable it to play the martyr role, warns current PCC Chairman Clemens Binninger of the CDU. "Each member of this committee has a special responsibility. AfD members will also have to live up to that responsibility."

If the AfD is excluded, the other smaller parties will probably have to be excluded, too, says Burkhard Lischka, the domestic policy spokesperson for the SPD Bundestag parliamentary group. "That would be taking parliamentary control to absurd lengths." The current members of the PCC assume that the security agencies will exercise more restraint when reporting to the committee in the future.

Other institutions, like the Hardship Case Committee of the Hamburg state parliament, are also reorganizing themselves because of the AfD. The committee decides whether foreigners and their families should be permitted to remain in Germany after their applications have been denied by the courts. A unanimous vote is required to allow the candidates to remain in Germany. In theory, this could only happen with the consent of the representative nominated by the AfD after the 2015 state election. "We wanted to prevent that," says Antje Möller, who represents the Green Party on the Hardship Case Committee.

To confront the problem, the committee members changed the rules, so that only a two-thirds majority is now required to approve a residency request. Nevertheless, the committee still lacks a regular AfD member. The other parties have used majority votes to prevent all AfD candidates from joining the committee. "They are bending the law all over the place to keep us out," says Alexander Wolf, the deputy state chairman of the AfD in Hamburg. Now Wolf and his fellow party members are taking the matter to court. They have announced that they intend to bring an action before an administrative court in the next few days.

3 Bilder Photo Gallery: The AfD Set to Enter the Bundestag 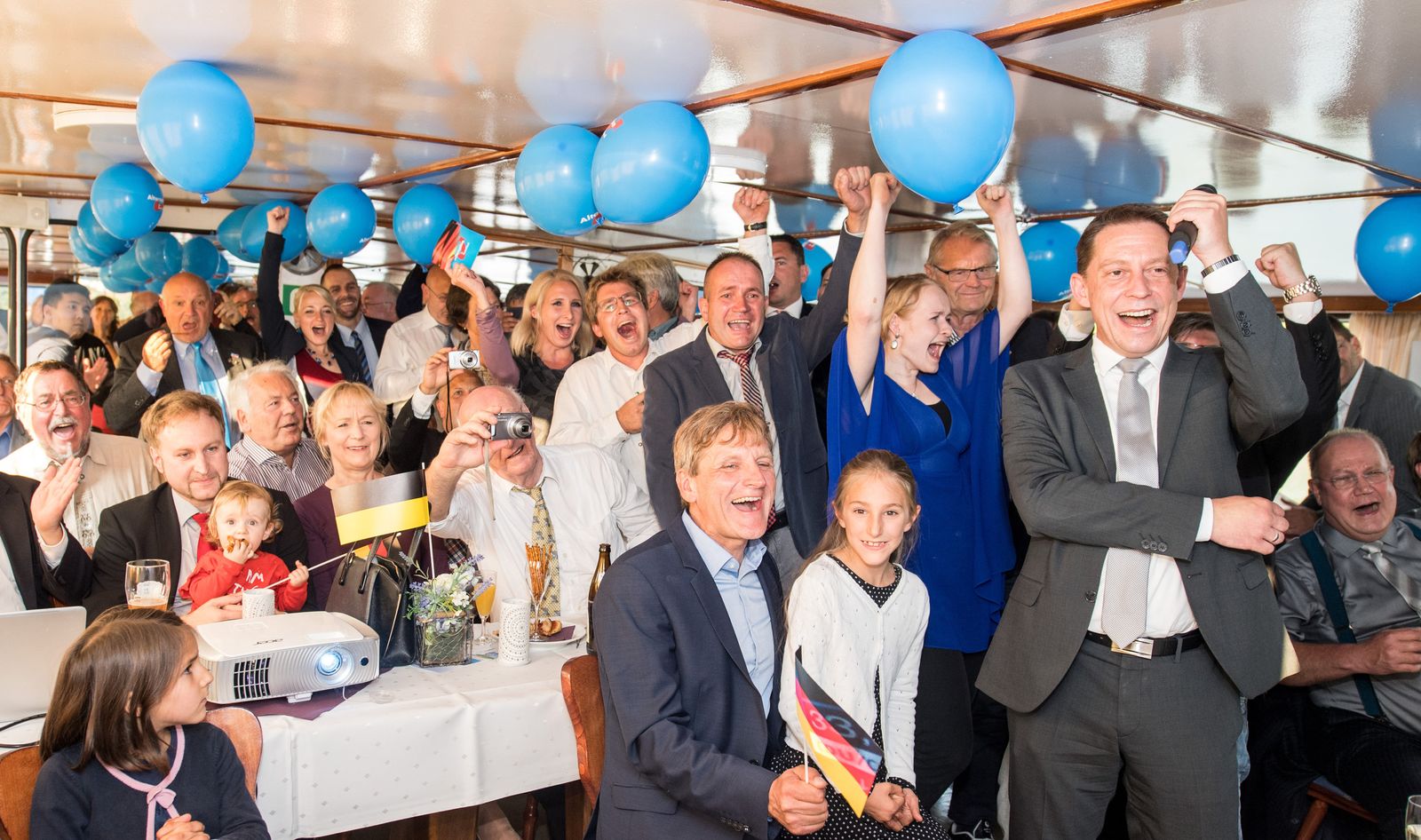 AfD supporters cheering at the party's election celebration in Stuttgart on Sunday night. The party had already managed to gain seats in many state elections in the country. Some state parliaments have aggressively tried to sideline the right-wing populists, but this has driven concerns that it would allow them to turn themselves into martyrs and enhance their popularity. 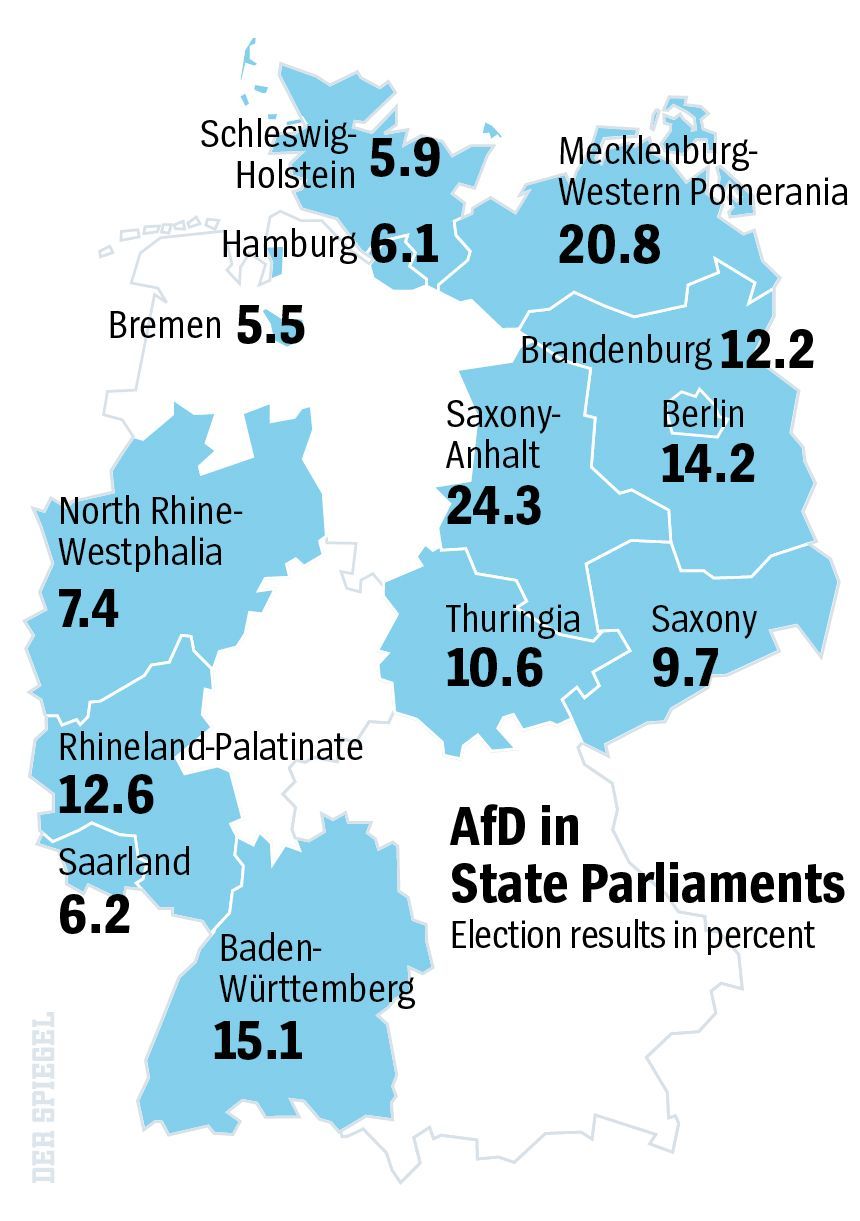 The AfD's presence in German states