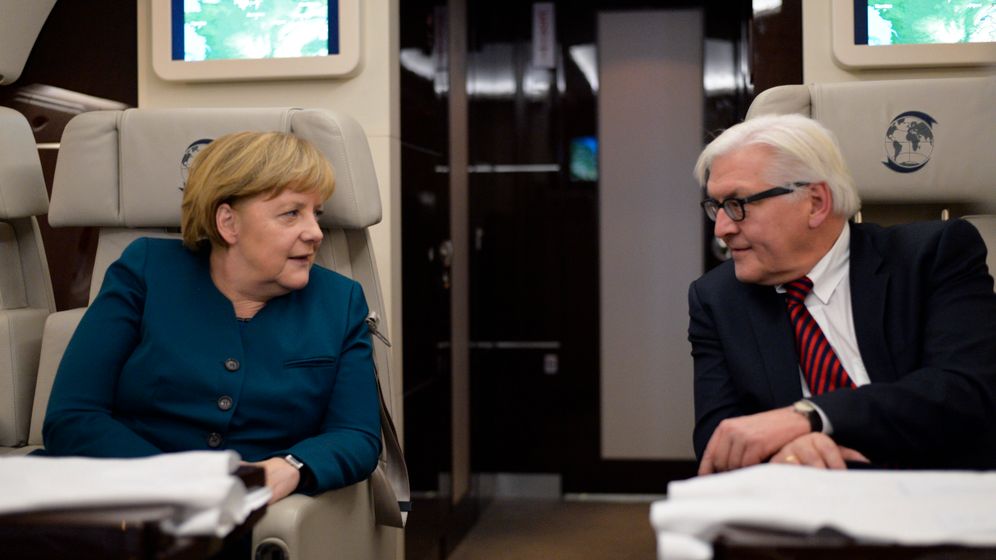 Last Tuesday's meeting between German Foreign Minister Frank-Walter Steinmeier and his French counterpart Laurent Fabius could hardly have been more harmonious. Dark-gray suits, white shirts, blue ties -- the two looked as if they had even coordinated their clothing as they faced the press. Steinmeier said he already felt at home after visiting the French Foreign Ministry for the third time in two weeks. Fabius politely praised his friendship with dear "Frank-Walter."

Relations between Berlin and Paris are better than they've been in a long time, and that's evident not just in the effusive exchanges of pleasantries. The French now want to follow the German example in economic policy, after two years of resisting it. Berlin in turn wants to provide Paris with stronger support in military missions in Africa in future. "Europe can't leave France on its own," said Steinmeier.

That's a big step not just for France, but for Germany as well. The new German government, inaugurated just a month ago, is charting a new course in foreign policy. The central question under Steinmeier's predecessor, Guido Westerwelle, was: "How can we keep out of armed conflicts?" Westerwelle favored a culture of military restraint, which meant leaving unpleasant tasks up to others.

Now, two ministers from Chancellor Angela Merkel's new coalition, which pairs her conservatives with the center-left Social Democrats, have set about abandoning Westerwelle's legacy. Steinmeier and Defense Minister Ursula von der Leyen believe that an economic powerhouse like Germany can't continue to stand on the sidelines. They want to show Germany's allies that the country can be relied upon. "We can't look away when murder and rape are taking place daily," von der Leyen told SPIEGEL in an interview.

Unwilling When Things Got Dangerous

The new approach has already led to concrete policy changes. Germany plans to dispatch more troops to support France's campaign against Islamists in Mali. The government is also considering providing military aircraft for transport and medical evacuation in the Central African Republic. This course isn't entirely new. When he was chief of staff to Chancellor Gerhard Schröder between 1998 and 2005, Steinmeier helped formulate a bolder German foreign policy. Steinmeier doesn't want to push Germany into foreign military adventures. But he, like von der Leyen, has realized the damage Westerwelle did with speeches calling for a "policy of military restraint."

Westerwelle's stance was in keeping with the passive role West Germany played during the Cold War, before Germany attained full sovereignty with unification. Although his position was mainly motivated by domestic politics, it went along with a veiled accusation that London, Paris and Washington were too trigger-happy. And Germany's partners didn't appreciate that. Germany gained a reputation as a moralistic nation keen to wag its finger, but unwilling to get involved when things got dangerous.

Steinmeier and von der Leyen want that to change. "We want to reactivate the Foreign Ministry," State Secretary Markus Ederer, a close confidante of Steinmeier, said last week. Another high-ranking official in the ministry put it even more clearly: "It's getting harder each month to justify a policy of military restraint."

Von der Leyen agrees. She wants to use the Defense Ministry to forge a common European security policy, and to put Germany, and herself, of course, at the forefront of this development. But the project will only be credible if Germany really does sign up to dangerous deployments.

The position adopted by the two ministers runs counter to the policy Merkel has pursued over the last four years. Merkel didn't stop the plans for an increased mission in Mali but her aides have tried to avoid creating the impression that it's part of a policy change. "There is no fundamental change regarding foreign missions," said a senior official in the Chancellery.

In her eight years in office thus far, Merkel has lost faith in the notion that military intervention can bring about improvements. She was particularly disillusioned by the German army's mission in Afghanistan. In addition, she tends to be influenced by opinion polls, which show that Germans are skeptical about the army engaging in combat missions.

The result is that Germany's foreign policy course promises to be a matter of debate in Merkel's cabinet in the coming years. Just how delicate the situation has already become was made clear two weeks ago.

Merkel, von der Leyen, Steinmeier and SPD head Sigmar Gabriel met on the sidelines of a cabinet meeting ahead of a meeting of EU foreign ministers, set for the following Monday, to address ways in which Europe could better support the French military mission in Africa. It was clear that Berlin would have to arrive at a common position.

At an EU summit in December, Merkel had responded negatively to the French desire for stronger European support. Now, however, she declined to use her veto. She wanted to send the French a message that they wouldn't be left alone. But it became clear just how wary Merkel is of the military mission when she noted that a parliamentary majority was necessary for the operation. Her message was clear: A final decision had not yet been made.

Still, Steinmeier and von der Leyen could mark down Merkel's preliminary change of heart as a success. Even before he took his oath, the foreign minister had given thought to how he might be able to recoup some of the influence his office had lost to the Chancellery in recent years. He knows that even small steps are valuable.

Immediately after taking office last December, Steinmeier explored whether it would be possible for Syrian chemical weapons to be brought to Germany for destruction. His predecessor, Guido Westerwelle, had been opposed to the idea, fearing that transports of chemical weapons could be met with the kind of violent and impassioned protests that accompany shipments of radioactive waste in the country. Indeed, when Merkel's foreign policy advisor Christoph Heusgen said last November that Germany could play a role in eliminating Syrian chemical weapons, Merkel's spokesman Steffen Seibert quickly voiced disapproval. Merkel did not want to risk conflict with Westerwelle on the issue.

From Steinmeier's point of view, the destruction of Syrian chemical weapons offers a prime opportunity for Germany to demonstrate its willingness to take on responsibility without having to take much risk. Von der Leyen agreed during a meeting between the two earlier this month. Together, they convinced Merkel.

Steinmeier would also like to become more involved in Europe than his predecessor was. French Foreign Minister Fabius could hardly hide his contempt for Westerwelle when the two met. Now, he has expressed his willingness to join Steinmeier on trips. "The Foreign Ministry has realized that the key to the European project is to be found in French-German relations," says Ulrike Guérot from the Open Society Initiative for Europe.

Volker Perthes, director of the German Institute for International and Security Affairs, also believes that the step toward France taken by the defense minister and foreign minister is an important one. "Such signals are often the prerequisite for substantive changes," he says.

The key question remains, however, whether von der Leyen and Steinmeier can jointly make inroads on the foreign policy domain of Merkel's Chancellery. The fact that the two have similar ideas about Germany's role in the world will certainly help. Steinmeier would like to strengthen European institutions while von der Leyen, in her previous role as labor minister, voiced her support for a "United States of Europe." Merkel, on the other hand, has little time for such musings. She has enough on her plate.

Traditionally, however, the Foreign Ministry and the Defense Ministry have been locked in bitter competition, which will not make it easy to maintain lasting harmony. Furthermore, von der Leyen is still unsure as to how much she should trust Steinmeier. When the plans for Germany's Mali mission found their way into the Süddeutsche Zeitung newspaper earlier this month, von der Leyen immediately suspected that Steinmeier was behind the indiscretion. The Foreign Ministry denied it, but the defense minister was not convinced.

Still, the two plan to present themselves as representatives of a changed Germany at the Munich Security Conference, which begins on Friday. In recent years, Berlin has been in the uncomfortable position of having to defend its passivity at the conference. This year, the Germans want to change the narrative.

It is a message that German head of state, President Joachim Gauck, plans to deliver as well. In his opening speech, Gauck plans to call on Germans to recognize their place in the world, according to plans from his office.

Defense Minister von der Leyen is not only interested in improving Germany's image among its allies. Rather, she would also like to develop a joint European defense policy worthy of the name. Thus far, such plans have always failed in the face of opposition from countries such as France and Great Britain, which wouldn't dream of delegating any control over their militaries to Brussels, thus sacrificing a portion of their sovereignty.

Von der Leyen is hopeful that Paris and London might begin reconsidering their stance given the increasing spending squeeze that all European governments are feeling. Defense budgets are shrinking and even large countries are beginning to wonder if it is worth buying expensive transport aircraft or fighter jets when their ally across the border already has such planes sitting in their hangars.

Such pooling and sharing of military capabilities is thus far nothing more than theory, for which Germany is partially to blame. In the wake of Berlin's Security Council abstention on Libya in 2011, Germany withdrew its troops even from its AWACS surveillance flights over the Mediterranean. France and Great Britain do not want to become dependent on German capabilities that they might not be able to use in case of need.

Von der Leyen would like to increase Germany's credibility and has even broached the topic of a joint European army. Just one year ago, her predecessor Thomas de Maizière rejected the concept at the Munich Security Conference.

Just how far Steinmeier and von der Leyen get with their new policy ideas depends to a large degree on Merkel. In recent years, the Chancellery was not always happy about Westerwelle's choice of words, but it supported his policy of military restraint.

Merkel believes that Germany's foreign policy role should be primarily that of enabling allies in difficult regions to solve crises themselves. To that end, she has authorized substantial exports of German weapons to authoritarian countries like Indonesia and Saudi Arabia.

Last week, during a cabinet retreat near Berlin, Steinmeier and von der Leyen presented their vision of a new German foreign policy, with the foreign minister focusing on Mali and the defense minister speaking about Central Africa. When they were finished, Merkel said: "I am not now going to say yes or no to the mission." One could hardly come up with a more precise formulation or her approach to policy. 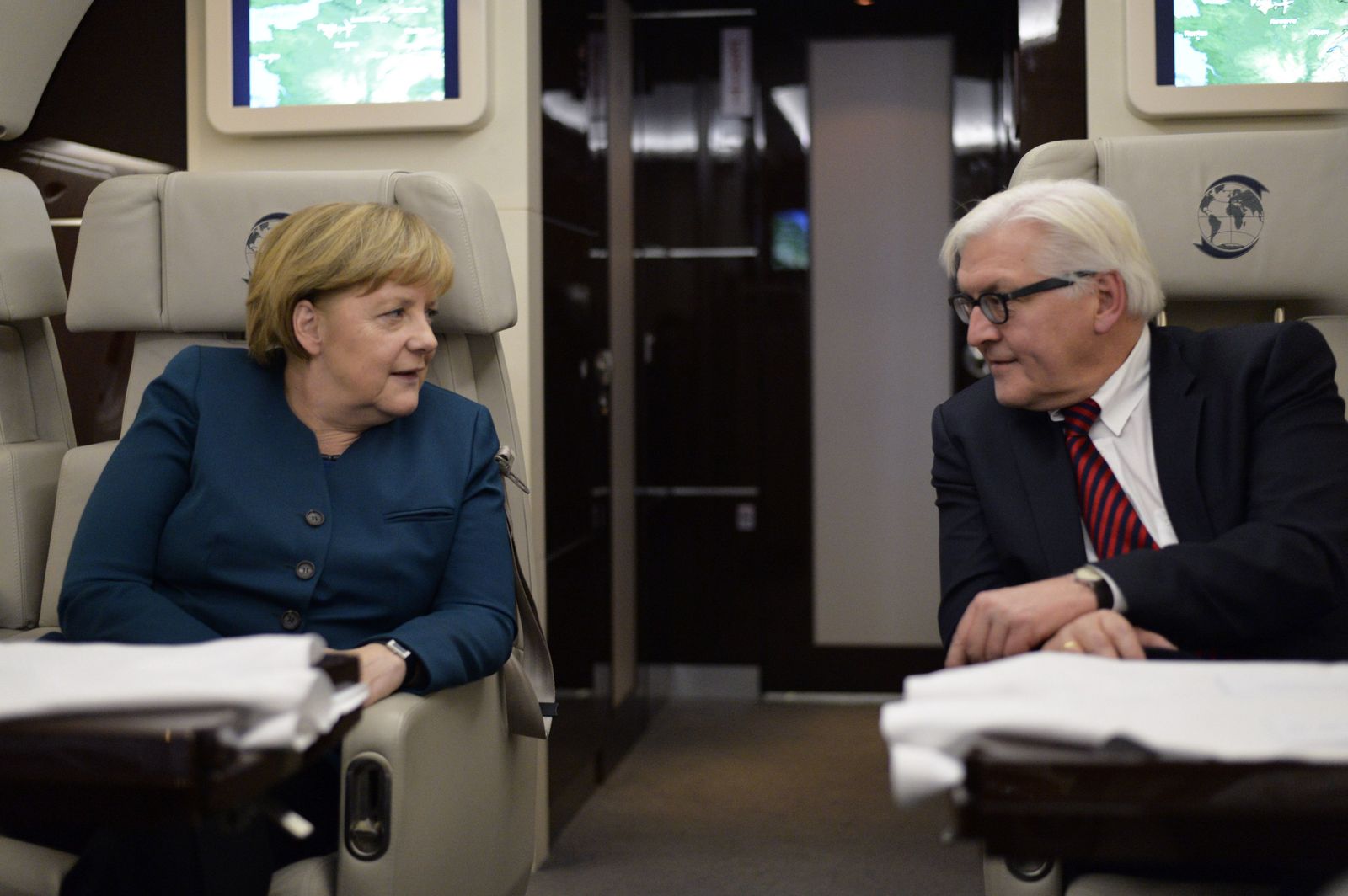 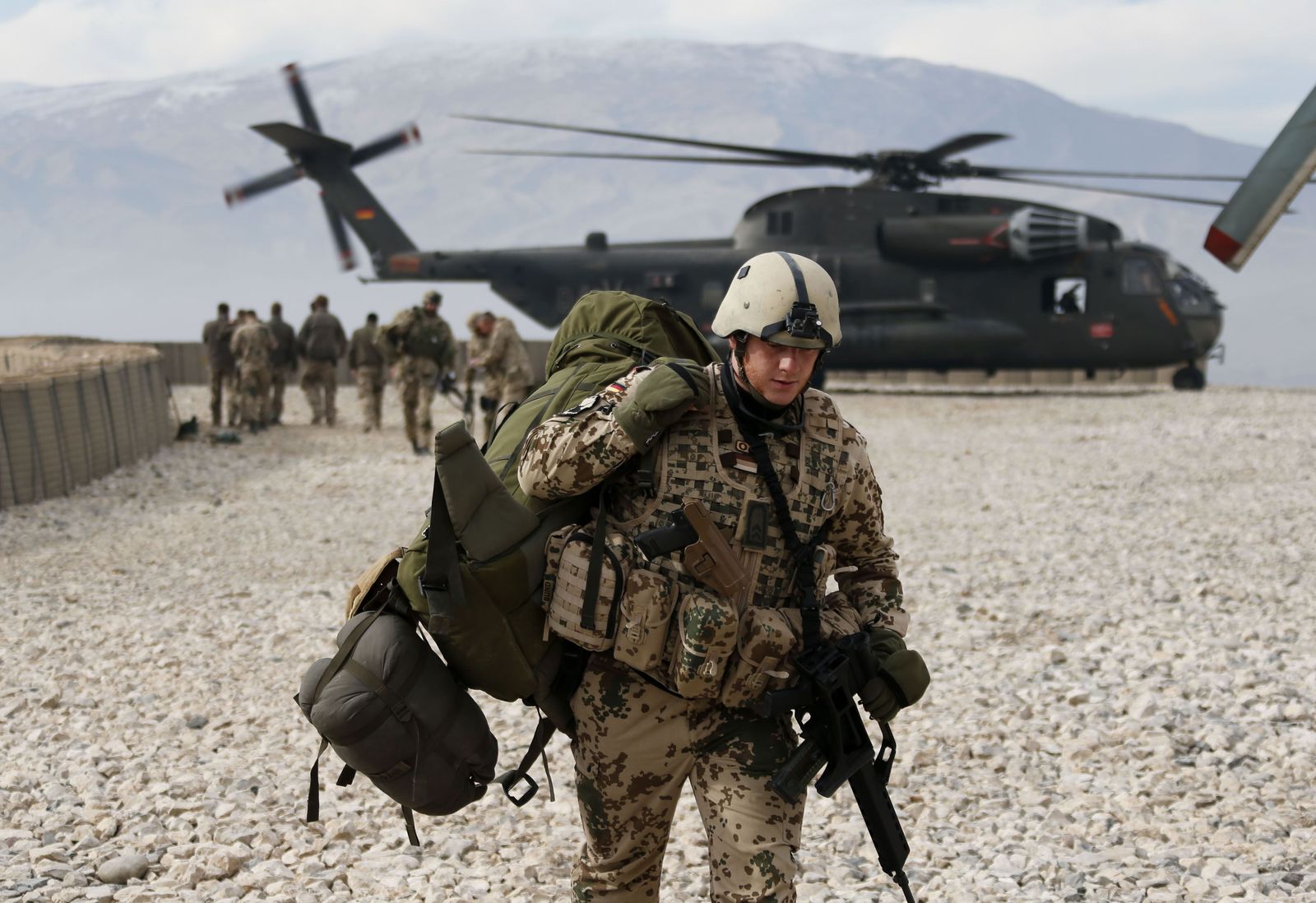 A German soldier near Baghlan in northern Afghanistan.