It was in January of this year that a 20-year-old Muslim woman of Turkish origin visited her bank, a Sparkasse branch in the western German city of Neuss, near Düsseldorf. The woman was wearing a niqab, a full-body veil that leaves only the eyes exposed -- and even before she could approach the cash desks, an employee blocked her path. He cited the ban on face-coverings in the branch and pointed to the sign at the entrance showing an image of a crossed-out motorcycle helmet.

The client, who had once before been prevented from entering the bank on the strength of the regulation, offered to lift her veil -- but only in a separate room and only in front of a female bank employee. But that wasn't possible, because only male employees were on duty at that moment. A conflict ensued and the Muslim woman left the bank without completing her transaction. Her husband, who was born in Germany and had been a customer at the Sparkasse for years, was indignant: Since the encounter, he claims, his wife has been distraught.

Some conservative politicians in Germany have recently said they would like to see the Sparkasse approach adopted across the country: Down with the veils. They argue that facial veils, like in France, should be banned in public places. "It is clear that the burqa isn't the right article of clothing for the population in Germany," says Bavarian Interior Minister Joachim Herrmann, a member of the Christian Social Union (CSU), the Bavarian sister party to Chancellor Angela Merkel's Christian Democratic Union (CDU). It is time to determine, Hermann says, as to "how that can be achieved."

The answer, though, is that it likely cannot be. An broad ban on facial veils would be an "encroachment on religious freedom" that "cannot be justified under constitutional law and would infringe on religious freedoms" in Germany, according to a report compiled by German parliament's research services. As long as the constitution is not amended, the report argues, such a ban is impossible.

According to Mathias Rohe, an expert from the Bavarian city of Erlangen on law and Islam, religious freedoms can only be curtailed "where safety concerns in the workplace or in street traffic make identification necessary or where open communication is obligatory."

In practice, however, such a broad regulation may not even be necessary in Germany. There are, after all, already plenty of rules governing such situations.

In German passport photos, for example, veils may at most cover the forehead and ears. International rules likewise stipulate that mouth, nose and eyes must be recognizable. During airport identification checks, the German Federal Police can require a woman to remove her veil, a procedure which takes place in an enclosed room with a female officer.

Security inspections at courthouses work similarly. In the courtroom, it is also expected that defendants or witnesses remove their veils, but there are no clear guidelines in place. As such, Bavarian Justice Minister Winfried Bausback, likewise of the CSU, is demanding "legal security and legal clarity" and wants to force the federal government to establish clear legal regulations so that "people involved in legal proceedings cannot cover their faces partially or completely." In practice, though, judges have found a way to handle it -- by making it clear to women that being veiled could work to their disadvantage.

Here, too, there are plenty of examples. When a Muslim woman in Frankfurt complained against the revocation of her unemployment payments, the judge asked her to at least show her face. Her refusal led to her claim being dismissed. In another case, a Munich district court judge attested that a woman who refused to remove her veil lacked credibility. And in the spring of 2011, a woman had to spend several weeks in jail because of her facial veil. A warrant for her arrest had been suspended on the condition that she appear in court. When she arrived completely covered, the judge did not consider her to be present. Only after her lawyer obtained a fatwa -- legal counsel from a Muslim cleric -- allowing for the "removal of the niqab for reasons of organs of justice" did the woman consent to show her face.

Even schoolchildren and university students can be banned from wearing facial veils. In 2014, a young Muslim woman who had applied at a vocational school in Bavaria in a headscarf saw her acceptance revoked when she showed up to class in a niqab. A court upheld the revocation, arguing that the facial veil was an "objective obstacle to teaching." It claimed that the student could not be identified, that it would hinder communication through mimicry and gestures that enables "social integration within the class," that her voice was too difficult to understand and that she was in danger of injury during scientific experiments.

Then there was the case of a teaching student from the central German city of Giessen, who, in the face of pressure from the university, agreed to appear unveiled to lectures and seminars, but then never showed up. The case of a young Muslim woman, who had studied for years wearing a full veil at the University of Bochum, did not, however, attract public attention. The university had accepted her on the condition that she raise her veil prior to exams so that a female university employee could confirm her identity.

"The student was actually very active, pretty extroverted," says one of her professors, Stefan Reichmuth. As such, he says, there was no problem understanding her or recognizing her under the veil: "She was unmistakable." Still, after the student obtained her bachelor's degree in Islamic studies, the university established new rules. When the niqab-wearing student wanted to begin her master's studies in 2014, she was given the choice: wear her veil or continue her studies -- and she chose the veil.

In the teaching profession, veils sometimes cause conflicts, and most German states have at least enacted limitations. Full veiling can be seen as an "indication of attitudes in opposition to the values of the Western world" and could "endanger neutrality," according to a bulletin from the Hesse Interior Ministry.

Other employees of the state have likewise been prevented from wearing full veils to work. An employee of Moroccan origin at the Frankfurt municipal office, for example, had wanted to wear a full veil when she returned from her maternity leave in 2011. The city, however, objected. "We want to see the faces of our employees," says then-head of personnel, Markus Frank, a member of the CDU. The woman ultimately left her job "voluntarily."

Mothers can also be required to remove their veils in schools or kindergartens. An elementary school in the western German city of Essen, for example, has rules in place to prevent mothers from entering school grounds in a niqab. In other places, fully veiled mothers must identify themselves to female employees when picking up their child from daycare.

In France, the ban on full veils emerged from a traffic incident. A police officer stopped a woman who was driving with her niqab and gave her a ticket for 22 euros, which the woman challenged as discrimination. The incident triggered a broader debate which ultimately led to a ban on any kind of facial covering in public spaces, including in schools, government buildings, means of transportation, hospitals and museums.

Those who hoped this would lead to a decrease in the number of women in veils, however, were to be disappointed. The number of women wearing a burqa or niqab has remained almost constant over the past five years -- at about 2,000, experts say. Many of them are converts, between 20 and 30 years of age. About 400 fines are given out every year, a number that has likewise remained constant.

In Germany, a ban on burqas would have little effect, if only because no women here wear them. "In Germany I have thus far only seen one single burqa," says Rohe, the expert on law and Islam, "and that is the one I own." There are also only a few hundred Muslim women in the country who veil themselves with the niqab, according to estimates -- though cities like Munich, with high-end shopping areas, also attract tourists from the Arab world.

Either way, the debate is less about numbers than it is about symbolism. The same, of course, is true in France as well, where several beaches have banned the burqini -- the full-body swimwear preferred by some Muslim women. French Prime Minister Manuel Valls has said that it is "not a new bathing suit collection, not a fashion trend." Instead, he said: "It stands for a political project, for the creation of a counter-society that is based on the subjugation of women."

The Sparkasse branch in Neuss, by contrast, has opted for a practical solution. The couple in question was invited in for a meeting and told that the issue was not religious freedoms but security for all customers -- which is why the bank's sign did not explicitly indicate that veils were prohibited. "During Carnival we have revelers who want to enter the Sparkasse with clown masks and so forth, and that isn't acceptable either, of course," says Sparkasse spokesperson Stephan Meiser.

It was agreed that the woman would go to the central branch and notify them about her visits ahead of time. A female employee is then made available to accompany the woman into a side-room where her veil is lifted. The two then return to the main area. Since then, there haven't been any problems. "Thank God," says Meiser, "everything is just fine." 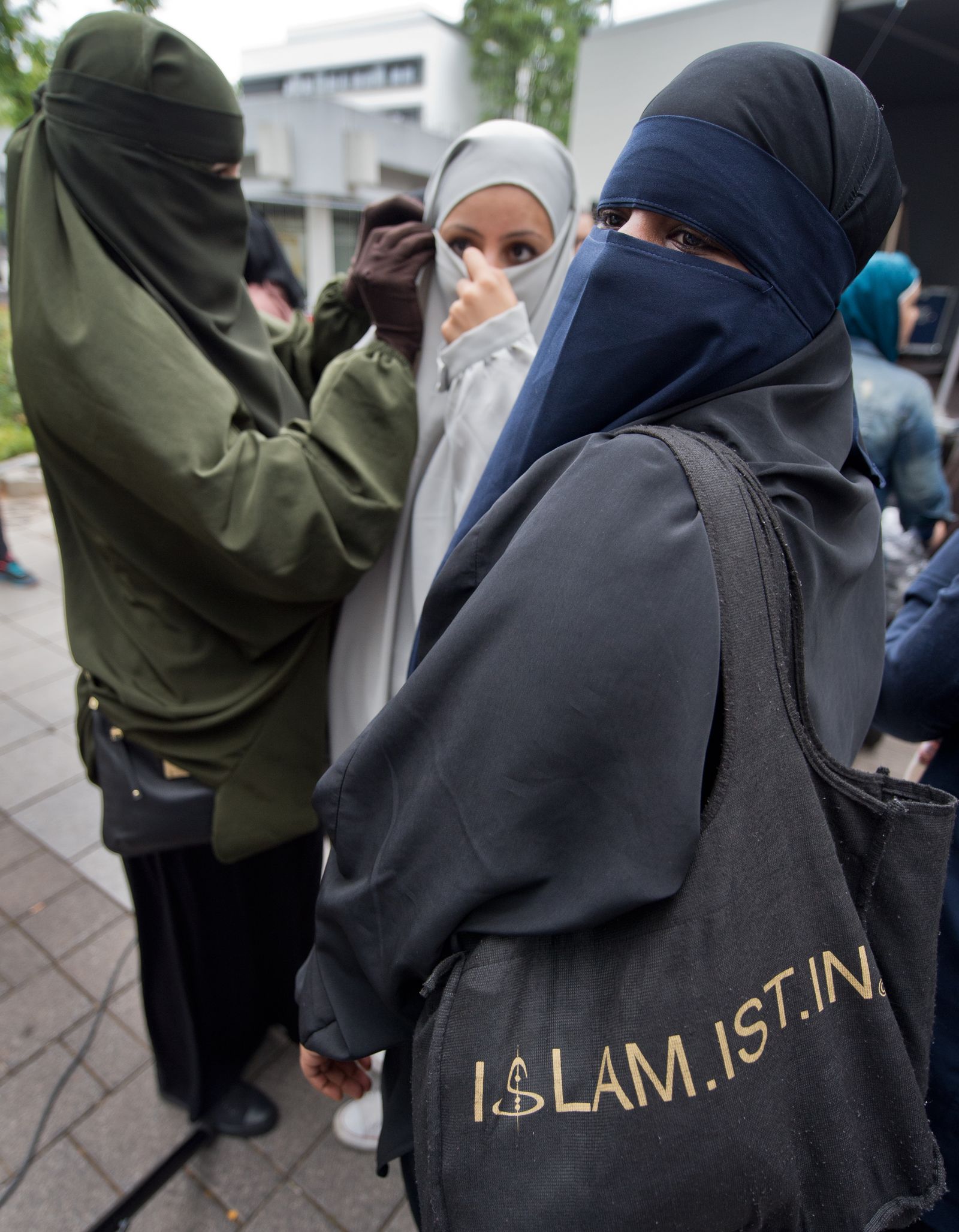 Veiled women in the German city of Offenbach in 2014