Freedom of expression is a basic right in Germany, but recent controversy over the anti-Islam film "Innocence of Muslims" has sparked a debate among lawmakers about just how far that right extends.

A populist group called Pro Deutschland wants to stage a public showing of the controversial anti-Islam film "Innocence of Muslims," which has inspired protests and deadly attacks on American and Western diplomatic missions across the Muslim world in the last week. Pro Deutschland may have just a few hundred members, but amid heightened fears of retaliation, the group's provocative threat has even attracted the attention of Chancellor Angela Merkel.

Asked at a press conference on Monday whether she thought a showing of the film, which is highly disparaging of the Muslim prophet Muhammad, should be prevented, Merkel said that a ban could be justified if public security was at risk. "I can imagine that there are good reasons for this," she said on Monday, adding that such measures were currently being considered by her government.

Addressing the issue is a delicate maneuver for the chancellor, who is known to place great value in freedom of expression and the press. Two years ago she lauded Danish cartoonist Kurt Westergaard for his courage in publishing caricatures along with several other colleagues that sparked protests and riots in the Muslim world. Westergaard's drawing, which showed the Prophet Muhammad with a bomb for a turban, even resulted in an attempt on Westergaard's life.

On Monday, Merkel acknowledged that she had been critical of the caricatures "in terms of taste." But according to the modern sense of free expression, she said, "He is allowed to do this." That is also the chancellor's take on "Innocence of Muslims." As such, she cannot ban the film outright. However, given the massive tensions over the work, she does want to prevent unnecessary provocations through its showing.

There is already legal precedence for this in German criminal law, which states that anyone who publicly "insults the content of the religious or ideological views in a manner likely to disturb the public order, will be penalized with up to three years' imprisonment or fined."

In 2006, the Lüdinghausen district court in the state of North Rhine-Westphalia did just that, handing down a one-year suspended sentence to a pensioner who had stamped toilet paper with the phrase "The Koran, the Holy Koran" and sent it to 22 mosques and Muslim community centers. The court ruled that his actions were not protected by freedom of expression because they had disturbed the public order.

Politicians across Germany's political spectrum cautiously weighed in on the issue on Tuesday, with Foreign Minister Guido Westerwelle and Justice Minister Sabine Leutheusser-Schnarrenberger calling for legal analysis of the situation. After all, Germany wants to send the signal that "we remain a tolerant country," Westerwelle told public radio broadcaster Deutschlandfunk.

In an interview with daily Frankfurter Allgemeine Zeitung, Leutheusser-Schnarrenberger said that a possible film showing must "naturally" be examined, "for example from the perspective of the right to assemble if security and order are endangered." The justice minister also questioned the effectiveness of a national ban, saying that such a decision would have "only a limited effect."

Renate Künast, the head of the Green Party's parliamentary group, told public broadcaster ZDF that she saw no reason for a ban either. Freedom of expression is a prized value in German society, she said. "We won't simply throw that away," she added. "Our democracy will hold out even if a few crazy people make difficult videos." Instead of a ban, Künast called for people to protest a public viewing.

Other officials have advocated making it as difficult as possible for Pro Deutschland to show the film, though. In an interview with SPIEGEL this week, Interior Minister Hans-Peter Friedrich, whose ministry is currently reviewing the issue, accused such groups of intentionally provoking Islamists. "By doing so, they are recklessly pouring oil on the fire," he said. "We must use all legally sanctioned courses of action to stop them."

The head of Germany's Central Council of Muslims, Aiman Mazyek, has called for an outright ban, warning in an interview with public broadcaster ARD that a failure to do so could result in street battles between extremists on both sides of the issue.

Still the Liberal Islamic Association (LIB) rejected the idea of a ban. "The more discussion there is about a ban, encouraging a taboo on such content, the greater the damage that is done," LIB head Lamya Kaddor told the daily Die Tageszeitung. This would only serve to further stoke anti-Islam sentiments that already exist in Germany, Kaddor added.

Politicians and security officials aren't just thinking about the burning embassies in the Arab world. There is also concern that there could be a repeat of violence seen at demonstrations in Germany this May, when members of the regional anti-Islam party Pro-NRW staged a Muhammad cartoon contest in front a Saudi Arabian school in Bonn, prompting clashes with Salafists that ended in a number of police injuries.

Retaliation abroad is also a concern. After Pro Deutschland demonstrations in August outside several mosques in Berlin, where they also showed Muhammad caricatures, there was an attack on the German embassy in Cairo on Aug. 22. The perpetrator's homemade bombs did not explode, but he was carrying several copies of a newspaper report on the Berlin court decision to allow the demonstrators to show the caricatures.

Even more distressing was the attack on the German embassy in the Sudanese capital Khartoum last week, which officials suspect may have also been inspired by the demonstrations in Berlin. Muslim preachers in Sudan have reportedly been calling for protests against Germany since the protests. 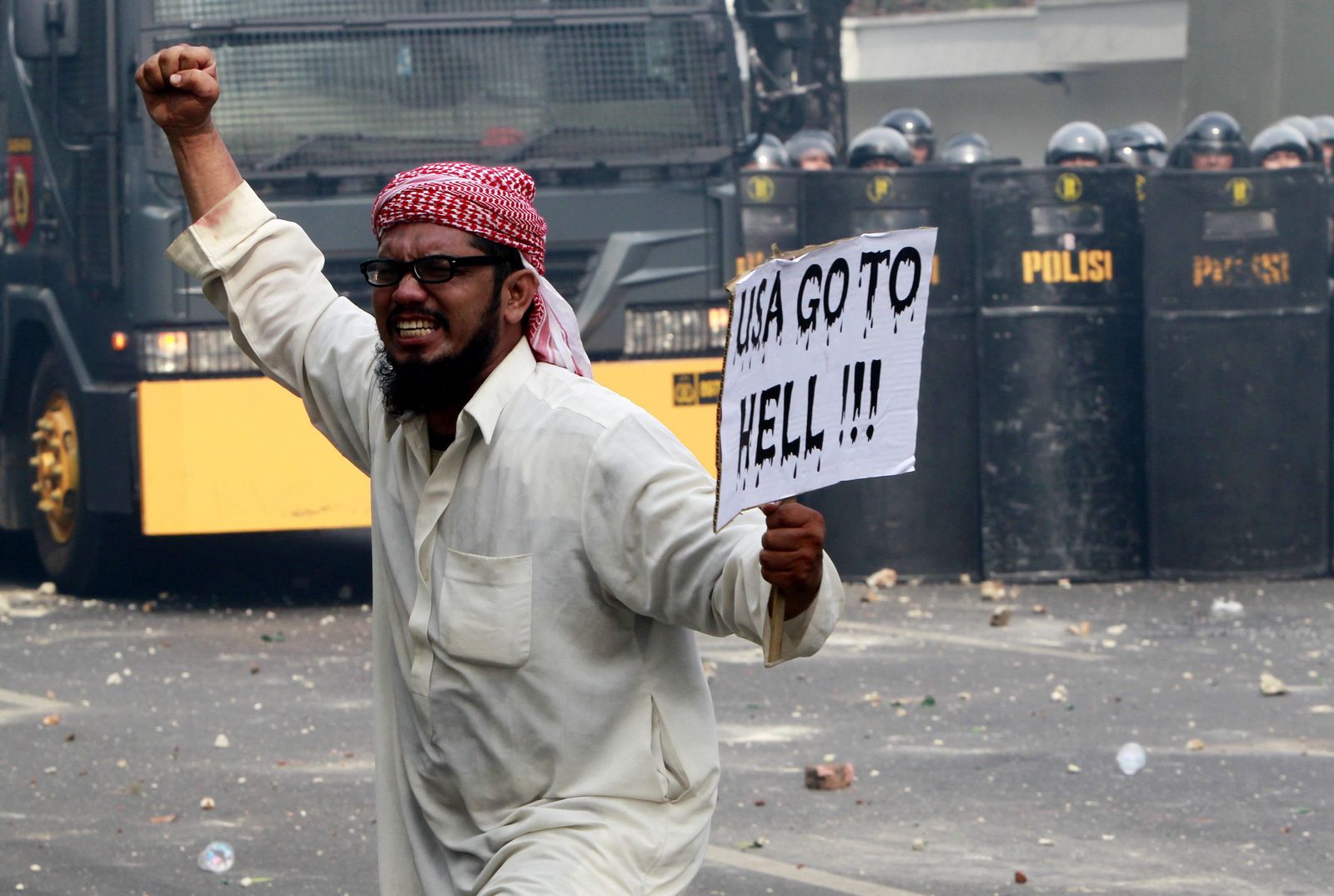 An Indonesian Muslim protester stands outside the US Embassy in Jakarta, Indonesia, where he participates in a demonstration against the film the "Innocence of Muslims".