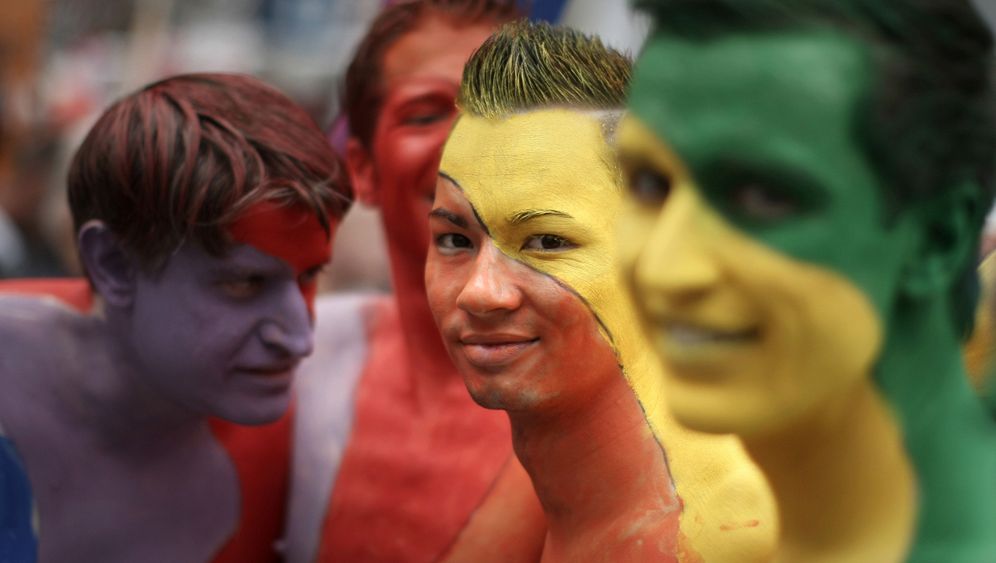 Photo Gallery: How Tolerant Is Germany

A gay couple that was seeking to open a restaurant near the Bavarian town of Freying received an anonymous letter early last year. "Stay away. We don't need people like you here," it read. Additional threats followed, including a faked obituary and an open, though anonymous, letter claiming that one of the two was HIV-positive and that there was a danger that diners could be infected. The restaurant was never opened.

Can a story like be really be true? In Germany of all places, a country that was last week enraptured by the coming out of former professional footballer Thomas Hitzlsperger and where it seemed like the entire country supported him?

Hitzlsperger made his announcement in the influential weekly Die Zeit, unleashing a tidal wave of media backing. "Respect" blared the left-wing Berlin daily Die Tageszeitung. Its conservative counterpart Bild chose the exact same headline, marking one of the very few times when the two publications have concurred. Everyone in the country seemed to be in agreement when it came to Hitzlsperger's courageous step.

Yet the jubilation was so great that it at times seemed a bit too much for the occasion. A former football player came out. Is that really such a monumental event? Of course its progress when it is made clear that homosexuality exists in the world of football as well. No player the caliber of Hitzlsperger had thus far gone public with his homosexuality.

But the rejoicing sounded suspiciously self-serving and smug: "We are so amazingly liberal that we can even get excited about a gay professional football player," the message seemed to be. "Germany is so much better than Russia, where homosexuals are openly discriminated against, and superior to France, where hundreds of thousands take to the streets to protest gay marriage."

One could almost feel the relief at the fact that the positive reaction to Hitzlsperger's announcement was large enough to cover up the normal hostilities, clichés, stereotypes and discrimination against gays that exist in Germany. But they were there. Even as Bild pronounced its "respect" for Hitzlsperger, the paper's columnist Franz Josef Wagner wrote in an open letter to the former German national team player: "Nobody thought that you are gay. You were athletic, a power-player." The prejudice was clear, even as it was hidden behind the admiration.

Wagner's bias came despite Hitzlsperger telling Die Zeit that "it is pure nonsense that homosexuals are 'unmanly.' One is confronted by this preconception again and again."

While Hitzlsperger was being celebrated across the country, the main churches in the southern German state of Baden-Württemberg announced last Friday that they were opposed to a plan to include lessons on homosexuality in the school curriculum.

This parallelism comes closer to the German reality. Another element to consider is Chancellor Angela Merkel's strict opposition to adoption rights for homosexual couples. How great really is the cause for celebration in Germany?

Secondary school teacher Gabriel Stängle is likewise concerned about public school students in Baden-Württemberg. The 41-year-old, lives in the Black Forest and launched an online petition in November of last year that had been signed some 90,000 times by last Friday evening. His campaign is entitled: "Future -- Responsibility -- Learning: No Curriculum 2015 under the Ideology of the Rainbow." Stängle's primary concern is what he describes as sexual "reeducation."

Stängle is angry with the state government -- a coalition of the center-left Social Democrats and the Green Party -- which is currently developing an educational program for public schools which will include the "acceptance of sexual diversity." Students are to learn the "differences between the genders, sexual identities and sexual orientations." The goal is to enable students to "be able to defend equality and justice."

Stängle sees this as being in "direct opposition to health education as it has been practiced thus far." Completely missing, he writes, is an "ethical reflection on the negative potential by-products of LSBTTIQ (which stands for "lesbians, gays, bisexuals, transsexuals, transgender, intersexuals and queer people) lifestyles, such as the increased danger of suicide among homosexual youth, the increased susceptibility to alcohol and drugs, the conspicuously high rate of HIV infection among homosexual men, the substantially lower life-expectancy among homo- and bisexual men, the pronounced risk of psychological illness among men and women living as homosexuals."

Most of the petitions' signatories live in the rural, conservative regions of Germany's southwest and the majority wishes to remain anonymous. Some signed with handles such as "The Gay-Hater."

Baden-Württemberg Education Minister Andreas Stoch (of the SPD) finds the petition to be "wrong and discriminatory." The claim that his ministry wishes to reeducate students is "completely absurd," Stoch says. "We want to educate children to be open and tolerant."

Peter Hauk, floor leader for Chancellor Merkel's Christian Democratic Union in the state parliament, on the other hand, says he can "understand the fears." He is bothered by the fact that the state government has elevated sexual diversity to a "guiding principle." Education, he says, must be oriented towards Christian and Western educational and cultural values, as is enshrined in Article 16 of the state's constitution.

The churches agree. Children and youth should not be influenced as they search for their sexual identity, reads a joint statement released by Catholic and Protestant churches in Baden-Württemberg. "Functionalization, instrumentalization, ideology and indoctrination must be defended against," the statement reads. That, of course, has long been the churches' strategy: avoid influencing people, particularly when it comes to sexual orientation. At least as long as heterosexuality was the predominant order of the day.

The well-respected Frankfurt-based sexologist Volkmar Sigusch, on the other hand, sees the Baden-Württemberg plan for its curriculum as a "long-overdue step toward educating children and youth about the cultural normality in our country." The issue of sexual diversity "badly needs to be (normalized) so that children can develop sexually in an atmosphere free of fear."

It looks a lot like Baden-Württemberg is sliding into a culture war -- despite the onset of the age of Hitzlsperger.

It's a situation that has been seen before. During last year's Christopher Street Day -- the name given in Germany gay pride parades and events -- the Baden-Württemberg government flew the rainbow flag over the state capitol building for the first time. But this show of solidarity with gays and lesbians went too far for the deputy head of the state's CDU chapter, Winfried Mack. He criticized the move as "undignified and dumb" adding that only the state flag should be raised above the capitol.

The Meaning of 'Gay'

Baden-Württemberg, of course, is not the only German state where such examples can be found. One need only look at how the meaning of the term "schwul," or gay, has evolved over the years in Germany. Originally it was used condescendingly or even in hostile ways. Those uses are still around, but today gay is more of a neutral synonym for homosexual and is even used this way by openly gay men.

But there is a second development which has seen "gay" come partly decoupled from its sexual meaning while still maintaining a negative connotation. An example from a schoolyard in Berlin: A student doesn't want to tell his classmates that he enjoys reading books at home because such a hobby is considered "gay." Feminine or uncool is the meaning here, just as the word "gay" can be used in English.

At the beginning of 2013, the city of Zweibrücken in the state of Rhineland-Palatinate published a calendar that was designed to keep young men and women away from drugs and alcohol. The slogan "sober (is) cool, drunk (is) gay" was used. "This calendar is homophobia funded by public money," said a spokesperson for the Lesbian and Gay Federation in Germany. The city answered by saying that it was youth slang and was not directed at homosexuals. The calendars were destroyed, however.

There are further examples. In 2012, the Bund der Historischen Deutschen Schützenbruderschaften, a group that is comparable to a socially conservative fraternity in the US, banned its annually chosen "king" from openly showing his homosexuality in a parade. The king's partner had to walk in the second row while the king, the group said, should bring a woman "because of Christian tradition."

There is also the case of Tanja Junginger, who had a temporary contract with a Catholic kindergarten in the city of Neu Ulm. After she came out as a lesbian, her contract was not extended due to her alleged "unnatural lifestyle."

Furthermore, gay men in Germany are still not allowed to donate blood despite there being no medical reason to exclude homosexuals from doing so.

Are they all simply isolated cases? Of course German society has become more tolerant on the whole, particularly in large cities. When gay couples kiss at the Brandenburg Gate in Berlin, few take notice anymore. It is normal. But there remains a quiet, widespread and diffuse bigotry, and it is present in the political classes as well.

"To be honest, I still have a problem with complete equalization," Chancellor Merkel said during the election campaign last year in response to a question regarding adoption rights for gay and lesbian couples. "I am not sure when it comes to the good of the child," she said.

How Liberal Is Germany?

Merkel had voiced her discomfiture with the issue before. Then too, however, she failed to mention any concrete reasons for her unease. She is certainly not homophobic and she maintains a good and friendly relationship with former Foreign Minister Guido Westerwelle, the first high-level politician in Germany to have come out as gay. It is likely more of a diffuse feeling that two men or two women cannot be as good at parenting as a man and a woman. The granting of full adoption rights for gay couples in Germany was not included in the coalition agreement she recently concluded with the Social Democrats. The SPD was in favor, but was not inclined to put up a large fight over the issue.

Merkel, of course, praised the coming out of Thomas Hitzlsperger last week. But, wonders Sönke Rix of the SPD, "What are Ms. Merkel's praiseworthy words worth when inequality still exists? (German conservatives) should consider whether they should use the current debate to rethink their outmoded position. Political action rather than laudatory words are needed." She notes that the current coalition agreement certainly wouldn't stand in the way. On the contrary: "The existence of unequal adoption rights for homosexuals is discrimination," Rix says. One could approach the issue on that basis, she continues.

German conservatives do have some prominent homosexuals in their party, such as the former Hamburg Mayor Ole von Beust and the healthcare expert Jens Spahn. Still, Merkel's government only extended tax benefits to homosexual couples of the kind available to heterosexual couples last year after being forced to do so by the German Constitutional Court. Skepticism of same-sex relationships is one of the last refuges of conservatism in Merkel's party. It isn't openly homophobic. But the words of the party's former parliamentary floor leader Friedrich Merz said it best: "I have nothing against gays," he said "as long as I don't have to participate." It is unknown whether he was ever asked to do so.

The debate about how homosexuals are treated is not solely about homosexuals. The issue has become a measuring stick for the liberalness of a society. Lobby groups, of course, are partially responsible for that shift, but there is a kernel of truth in the approach. How liberal a society is can be seen in instances where people are susceptible to discrimination. And by that measure, Germany's society is far from being liberal to its core.