Guido Höper hasn't finished his vocational training yet, but the 24-year-old has already been inundated with job offers.

Höper likes to teach children how to "beatbox," or pretend to be human drum machines using their hands and mouths like hip-hop artists. The assistant social education worker takes his workshop from one children's day care center to the next in the German port city of Hamburg. But his skills don't just delight the children. The heads of these day care centers would also love to hire him, and not just for the unusual sounds he can produce.

"I'm valuable partly because I'm a man," he says. Though Höper is currently taking a break from his studies in social pedagogy, he hopes to earn his certification to be a child care worker soon. After all, he's already had three offers for full-time positions in recent months.

Male child care workers are probably the most highly sought-after professional group in Germany. Local authorities and private kindergarten operators are scrambling to attract the exotic teachers, staging special events at colleges, setting up information stands at job fairs and inventing all manner of grandiloquent catchphrases. A campaign in Stuttgart is called "Strong guys for strong kids," while day care operators in Hamburg are recruiting male staff under the slogan "Variety, man!" Beatboxer Höper is featured on one of the posters.

While other men are worried that positive discrimination for women is squeezing male job-seekers out, having a Y chromosome almost guarantees a career in child care.

Whereas many industries are struggling to ensure that women fill at least 30 or 40 percent of jobs, the child care sector would be happy with far fewer men than this. The German government has committed to increasing the proportion of male educators, with the Ministry of Family Affairs and the European Social Fund spending a combined €13 million on the "More Men in Early Childhood Education and Care" program. The funding will go toward conferences, information tours and mentoring.

The long-term aim is 20 percent, though that is still far from being achieved. Recent statistics suggest men make up just 3.5 percent of the staff at day care centers. Without volunteers and temporary assistants, the figure is even lower, at 2.9 percent. Although the proportion of men is around 10 percent in Flensburg, Kiel, Hamburg and Frankfurt, in some rural areas the only male employee in the building might be the custodian (see graphic).

Employers are not to blame for this, though. "We welcome it when our educational establishments give men preferential treatment over equally qualified women," says Sabine Herrenbrück, the head of the day care division of the Protestant church in the Hesse and Nassau regions. The organization's facilities employ some 5,300 staff, 165 of them men. "There's more than one sex in the world out there," Herrenbrück says. She says mixed teams are an asset to child care centers. "Ideally, we'd like to have the same number of men and women," she adds.

Politicians and child care organizations aren't just interested in attracting more men to balance out their staff ratios, though. In August 2013 -- less than a year away -- all parents in Germany will have a right to a day care spot for their children beginning at age one. It now looks increasingly likely that this promise will be broken, though. As such, the governing center-right coalition in Berlin can expect demonstrations just days before the general election, while municipal and local authorities could face legal action.

"Appropriately trained specialists to operate day care facilities" are lacking, according to the German Association of Cities. The German Youth Institute estimates that an extra 20,000 day care staff will have to be hired simply to meet current demand. Potential applicants of both genders are therefore being wooed with attractive employment packages, especially in cities. The Bavarian city of Munich, for example, is offering city-owned apartments for rent and organizing introductory weekends complete with a sightseeing tour, free tickets to the zoo and a meeting at the famous Hofbräuhaus brewery. Frankfurt hands out welcome packages and has upgraded educators on the public-sector pay scale. Other locations are giving away monthly public transport passes or fuel vouchers.

Men are in particularly high demand because many parents don't want their children looked after exclusively by women. According to a study carried out on behalf of the Ministry of Family Affairs, more than a third of mothers and fathers prefer day care facilities that have male staff. The higher the parents' educational and income levels, the more important they consider having male child care workers.

Iris Wagenblast, the managing director of day care center operator Die Halben Meter, or "The Half-Meter," in Hamburg's Eimsbüttel district, can proudly point to her 50:50 staff ratio. An equal number of men and women work in the company's kindergartens, although there are fewer men in the nurseries. In an attempt to hang onto her male staff and attract even more, Wagenblast gives them extra benefits in terms of training courses and specialization. Their salaries are also an issue. "Men tell us what they want to earn," Wagenblast says. "They know what they are worth."

Nevertheless, the scope for negotiation is limited, and the pay isn't great. Male educators may be as highly sought-after as top-level managers, but they are often paid far less than their drivers. Staff at the employment campaign headquarters say that many men lose interest the moment they hear what their salary would be. Full-time child care workers initially earn less than some corporate consultants charge by the day. Public-sector child care workers start off at about €2,200 gross per month, while private day care centers often pay even less.

On the other hand, the chances of being laid off are slim, and perhaps such educators will be valued more highly in the future. That could make the profession more interesting for men who are currently pursuing different careers. Michael Baumeister, a departmental head of the Berta Jourdan vocational schools in Frankfurt, recalls how one applicant turned up for his interview in a smart suit. The man said he wanted a change of career now that his son had been born.

He had previously worked as a banker. "He's the first applicant we've had from this particular professional group," Baumeister says. 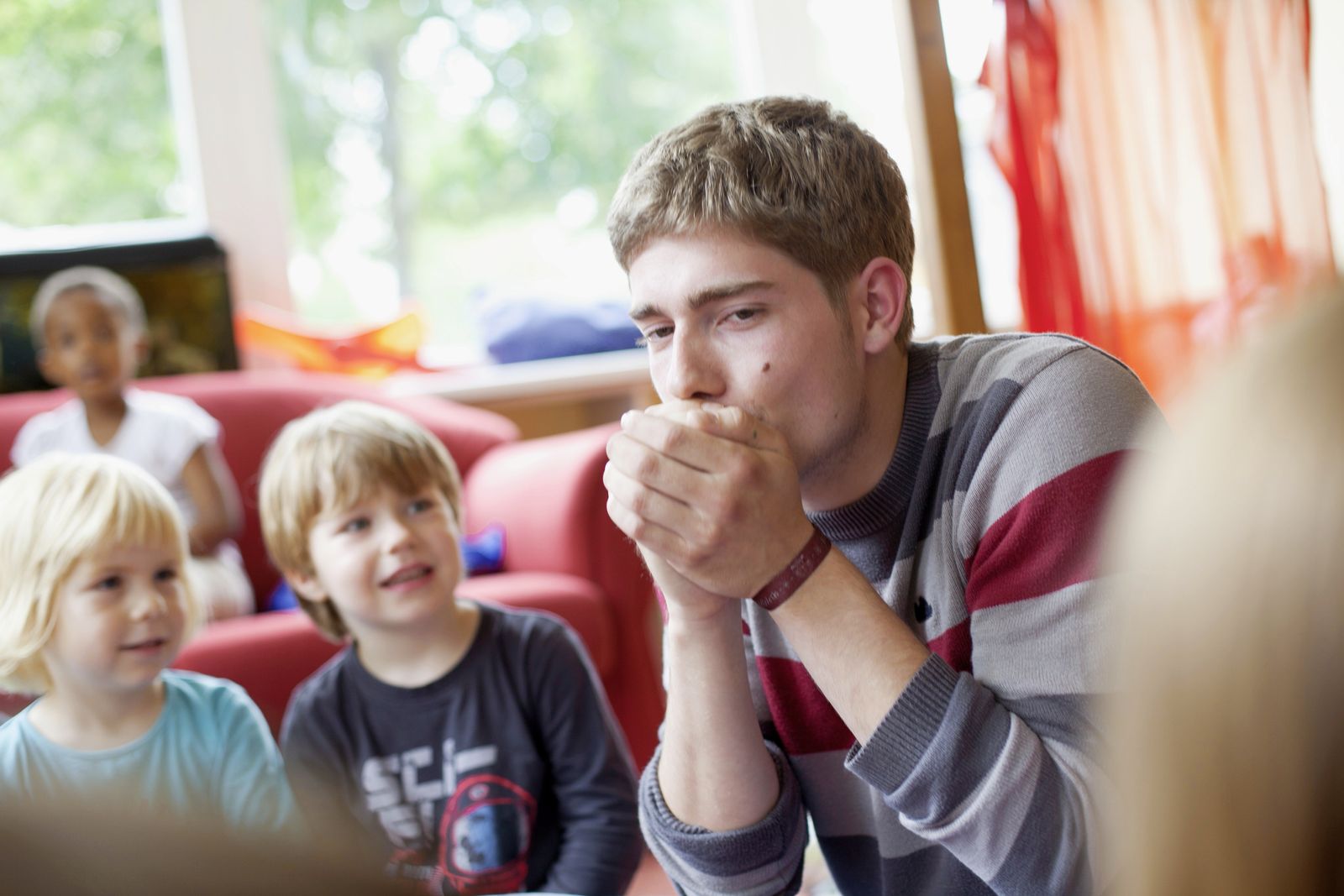